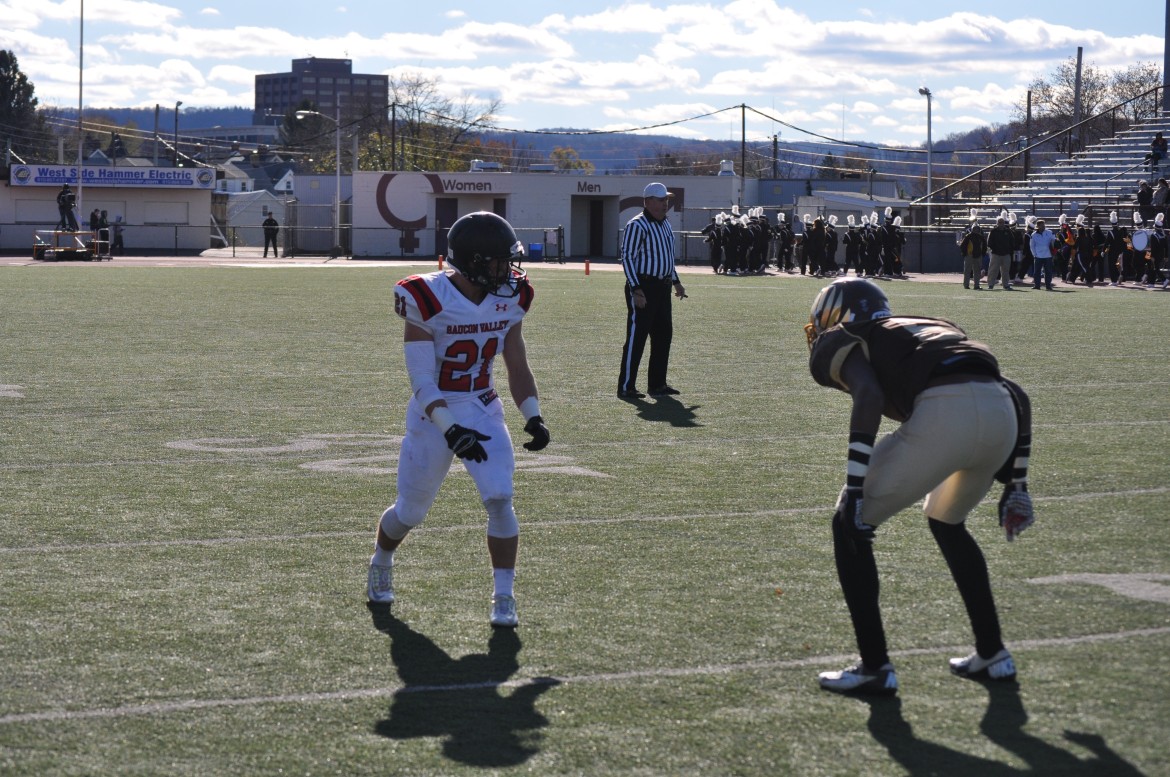 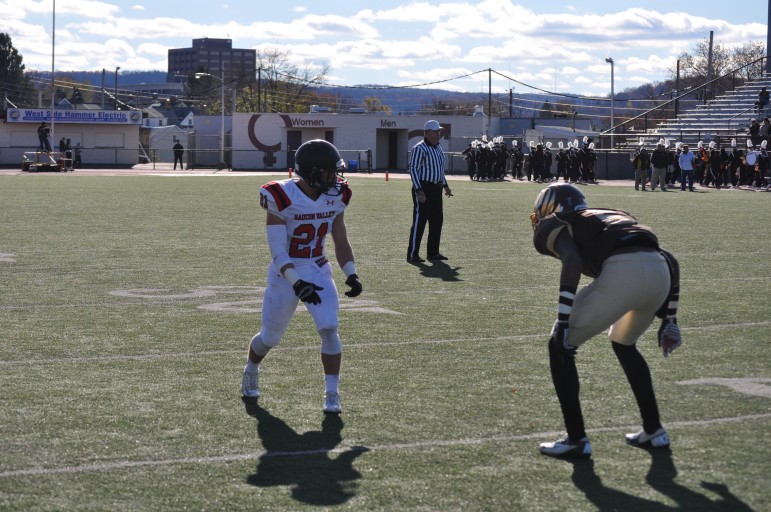 It is very easy to argue that family, community and brotherhood are very powerful concepts all by themselves. But when those three things come together along with determination and talent, incredible things are bound to happen. Not many people outside the Hellertown-Lower Saucon community gave the 2015 Panthers much of a chance to take down the Bethlehem Catholic Golden Hawks. Most sportswriters from the local newspapers circulated that opinion throughout the Lehigh Valley prior to Saturday’s game. BECA was supposed to win this game, but someone forgot to tell the Panthers! Not that Saucon would have listened, but the Panthers “BELIEVED” and defeated Bethlehem Catholic 14-6 yesterday. With their families and community squarely behind them, the Panther “brothers” now advance to the PIAA District XI Finals next Saturday night against Lehighton.

The game started a little slow with both teams trading their first two possessions. Then, on 2nd & 8 of Saucon Valley’s third possession, Evan Culver suddenly broke free and scored his 34th touchdown of the year with a 68-yard run down the BECAHI sideline with 1:43 remaining in the first quarter. The BECA coaches, players and fans all got an up-close look at what Evan Culver and Panthers can do. 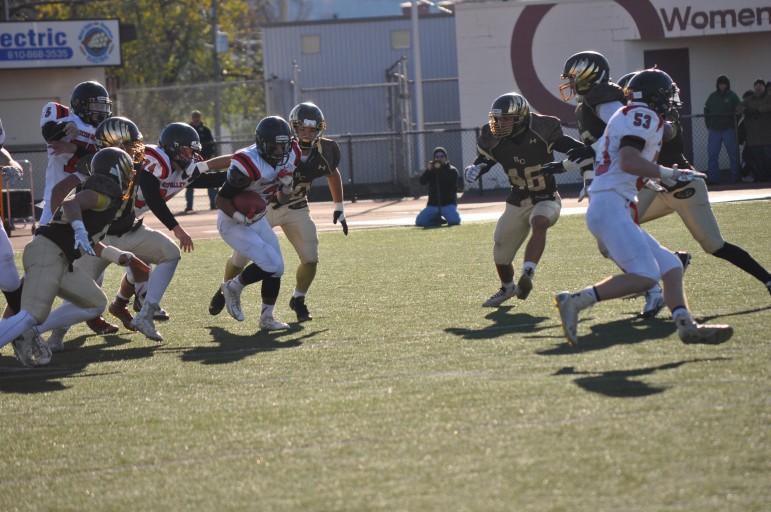 Evan Culver finds some space in the BECA defense

On this highlight play, the Panthers broke their huddle into an “Ace” shotgun, spread formation with a single tight end and flanker on the right along with a “twins” look wide to the left. Culver was in the backfield to Thatcher’s left. Thatcher received the snap and handed to Culver. Kane from his tight end position blocked down to wall off the interior of the BECA defense while both Panther guards, Christian Carvis and Ryan Meyers, “pulled” to their right intent on leading Culver around the right end. Nate Harka from his flanker position was able to stalk and seal his defender to the inside while the Hogs manned up on their assignments. Culver followed his Hogs and scampered 43 yards untouched before cutting back and breaking a tackle to take advantage of Kory Kemmerer’s hustle-block on the last Hawk defender and score. This beautifully executed play along with Josh Snead’s successful kick was all the offensive points the Panthers needed this day.

The Hawks would answer late in the 2nd quarter with a 9-yard touchdown run by Antwon Keenan. Keenan’s 33rd touchdown of the season was set up by a 50-yard reception on a fade route to BECA’s Nate Stewart. BECA, however, missed their extra point and the score stood at 7-6 with only 1:03 to go until the halftime intermission.

As many spectators headed for the hot chocolate, Zach Thatcher took the ensuing kickoff from his own 13-yard line and hit a middle return for 60 yards all the way down to the Hawk 27. 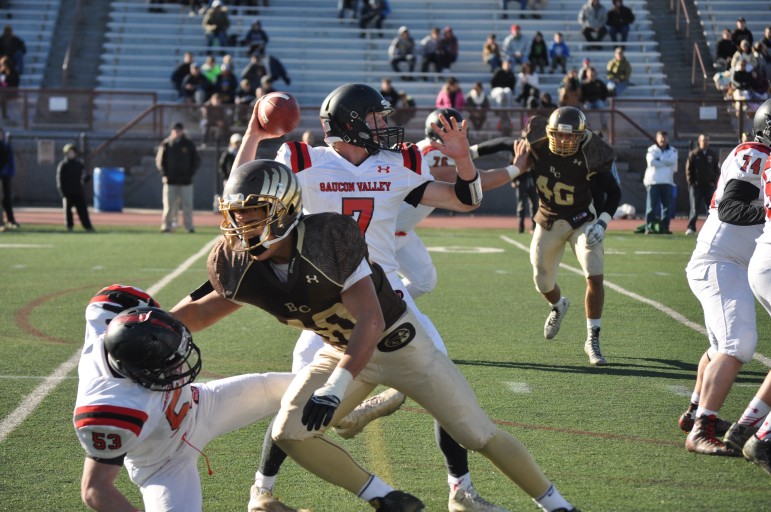 Courtesy of a great throw and catch into the Panther sideline between Thatcher and Nate Harka on a 4th and 7, Saucon moved the ball to the BECA 9-yard line. With about 10 seconds remaining in the 1st half and no timeouts, Thatcher rolled to his right and rifled the football to Alstan Wolfe in the back of the BECA end zone. Wolfe slipped out of his cut but was able to make the catch above his head while on his knees. It was another spectacular grab by the sophomore. Josh Snead converted the final point of the game to put Saucon up 14-6.

It was a scoreless second half filled with big plays.

One of those plays included Saucon’s Evan Culver putting himself in perfect defensive position to defend another deep fade to BECA’s Nate Stewart. This time, Culver was able to see the ball and deflect it away in the Panther endzone on a 4th and 5, forcing the BECA turnover on downs.

Another great play was Nate Stewart of BECA and his exciting 53-yard punt return that had the Panther faithful holding their breath late in the 3rd. Three plays later, however, Mike Kane batted down Julian Spigner’s third-down pass, forcing BECA to punt. 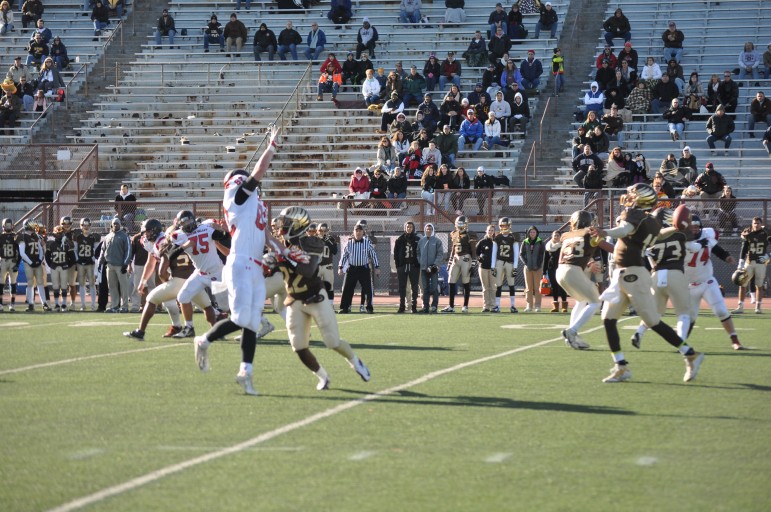 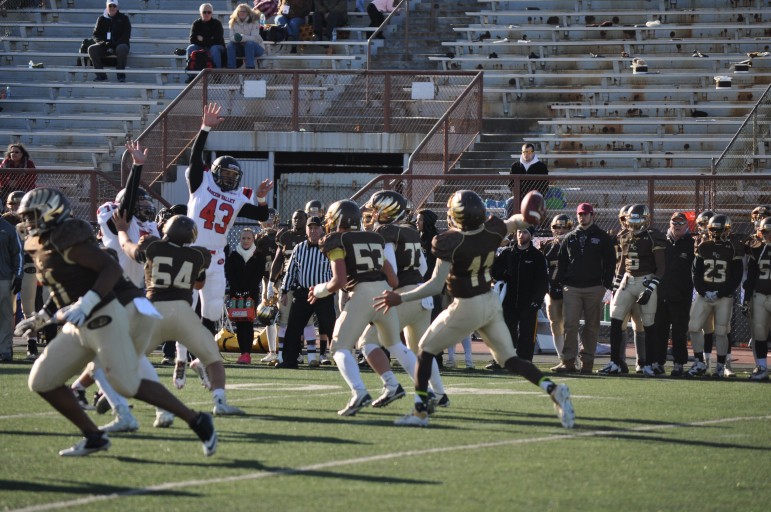 No matter where Spigner looked, he had trouble connecting with his receivers

The Saucon Valley offense deserves credit for gutting out a few timely first downs and flipping the field position at key times during the second half. The Panthers kept the ball and the clock moving, including a pair of eight-play drives in the 4th quarter.

But it was the Panther defense that came up the biggest, holding BECA’s dual-threat quarterback Julian Spigner to only 2 yards rushing on 11 carries. Further, Spigner completed only 7 of his 19 passes. In addition, the Panther “D” held BECA’s best running back Antwon Keenan in check. Keenan was limited to 80 yards rushing on the day. 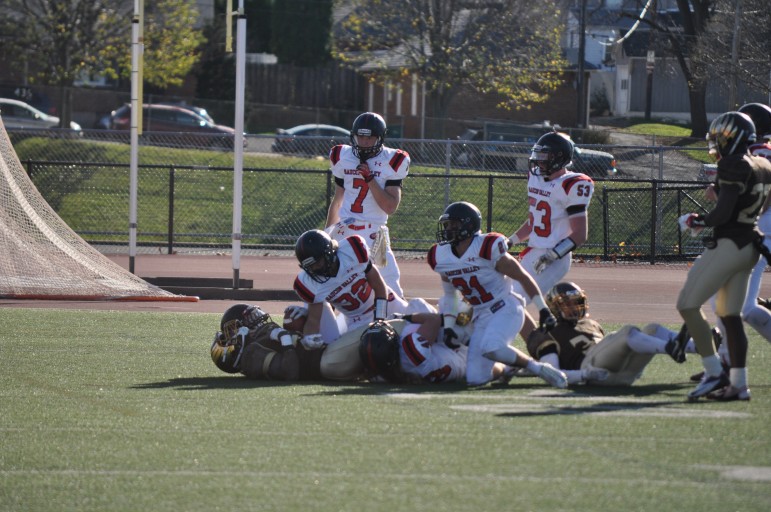 A pack of defensive-minded Panthers (Harka, Paolini and Kehs) taking it to the Hawks

When asked about the Panther’s gritty performance, defensive coordinator Chris Labatch said, “We saw a couple reads on film that we thought we could take advantage of and we had the kids learn those reads. Our D-line won the line of scrimmage and our linebackers made the reads and filled fast. Everyone did their jobs and executed the game plan perfectly. I have to point out the play of everyone who played on the defensive line. Cody Zrinski, Trey Polak, Mike Kane, Ryan Meyers, Abe Lugo and Devin Van Vliet. They won the line of scrimmage and ate up blocks and let the guys behind them (Carvis, Kehs and Paolini) fly around and make tackles.” 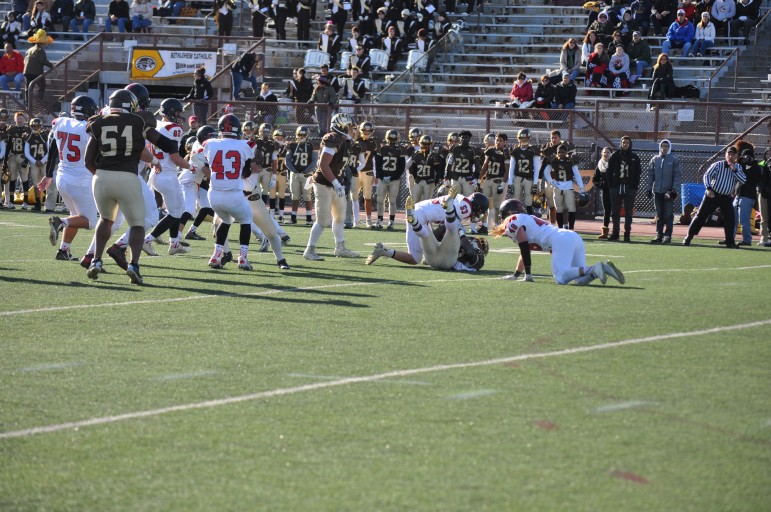 It was a masterful game plan that limited Bethlehem Catholic’s high-octane offense to 233 total yards of offense and only 6 points. The Hawks came into this showdown with Saucon averaging 44 points per game.

Asked what he said to his team after such a great victory, Head Coach Matt Evancho said, “I told them the same thing I tell them after every game. Go and celebrate this win with your teammates, your family and your fans, but when you wake up Sunday, our minds must move on to our next opponent and winning a championship.” 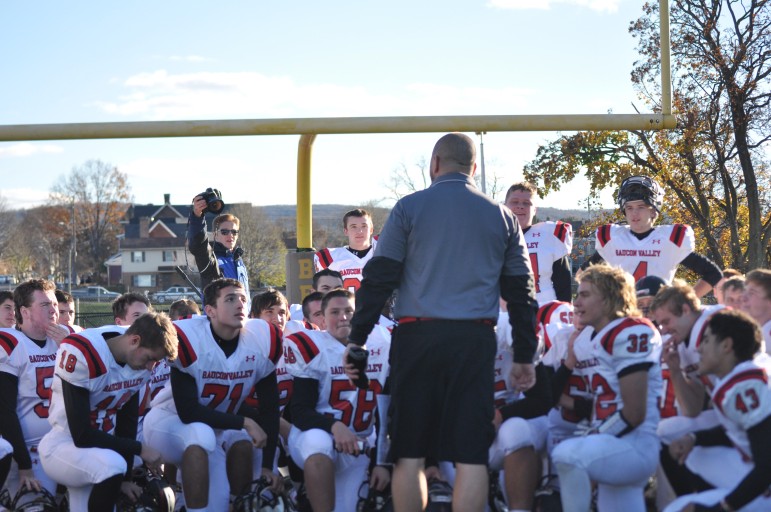 And so the storybook journey continues. The Panthers remain a perfect 11-0 on the season. Next is a roadtrip to take on the undefeated 11-0 Lehighton Indians in Lehighton for the PIAA District XI Championship and the right to continue and play for a state title. It’s not going to be easy, but these Panthers with their family and friends supporting them will be ready for the challenge.

Kickoff is scheduled for Saturday night at 7 p.m. Saucon Source is already looking forward to the game and we hope you are too. Do you think the Saucon Valley community can strip Lehighton of some of their homefield advantage by having a majority of spectators present at the game Saturday night? Our boys will be wearing white. Shouldn’t we, too? The Source will be with you!