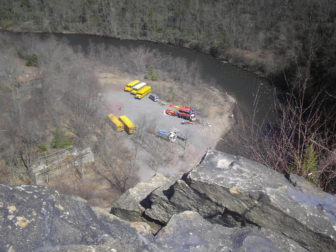 “Rahman Hassan, 18, a sophomore from Nazareth, fell while he and friends were hiking at the popular hiking spot,” University Relations Director Jessie G. Heimann confirmed. “Emergency workers were called to the area around noon. He succumbed to his injuries at the scene.”

Hassan, whose major was undeclared, was eating with friends on a rock at the top of the falls before the accident occurred.

According to the release, a “second Penn State Lehigh Valley student, Fadi Abboud, 19, a junior from Allentown, reportedly attempted to help Hassan retrieve a dropped water bottle when both fell approximately 50 feet to the base of the falls. Abboud was flown to Lehigh Valley Hospital-Cedar Crest.”

The Morning Call reported that at least 11 hikers are believed to have fallen to their deaths and dozens more have been seriously injured in Lehigh Gorge State Park since the late 1970s, most of them in the picturesque Glen Onoko Falls area.

The most recent death occurred two years ago, when a 20-year-old Catasauqua man fell from one of the falls, the news story indicated.

“We are deeply saddened to learn of the heartbreaking loss of our student and the injuries of another in this tragic accident. Our hearts are with the family and friends of both Rahman and Fadi. The Penn State Lehigh Valley community is mourning Rahman’s death and hoping for Fadi to make a full recovery,” said Tina Q. Richardson, Chancellor of Penn State Lehigh Valley. “We ask that everyone respect the privacy of the people directly involved as it is a difficult time for them and their families.”

Penn State Lehigh Valley will provide counseling services Thursday, May 26 from 11 a.m. to 2 p.m. or by appointment.

Students, faculty and staff who want support in response to this accident are urged to contact the counseling office at 610-285-5077.