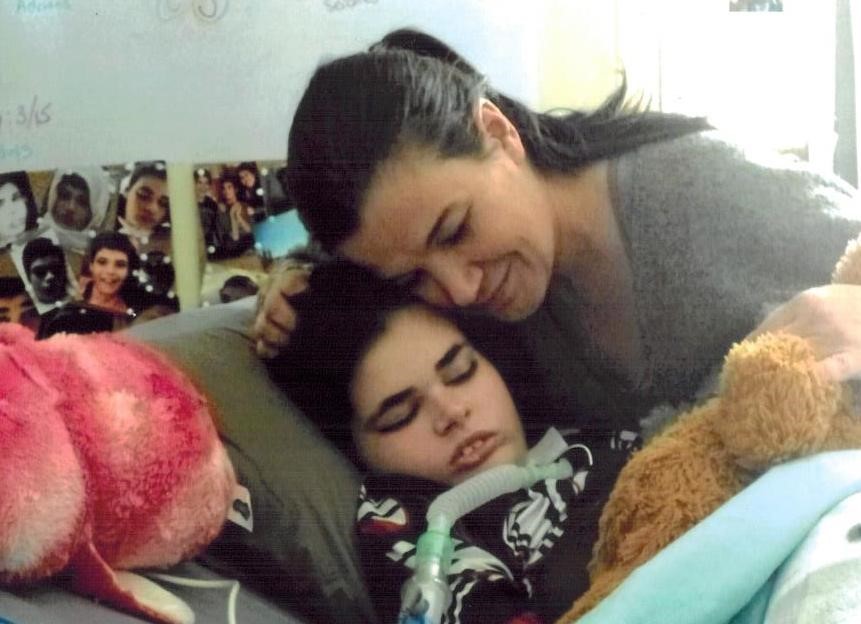 Emily Armstrong, 18, gets a hug from her mother, Lisa Armstrong, at their home in Wassergass.

Most families facing crushing medical expenses have just one member with a lingering, catastrophic diagnosis. The Armstrong family, who live in Wassergass, Lower Saucon Township, isn’t like that. Yes, Emily Armstrong, 18, was being cared for at home on life-support following a series of unfortunate medical incidents, since 2015. Then, the Armstrongs’ home near Springtown burned to the ground in September 2016. Single mom Lisa Armstrong carried Emily to the front lawn and went back in to get her ventilator and key medical supplies. No one was hurt.

Insurance covered the Armstongs’ move to Wassergass, where Lisa and Emily and her four sisters have been living. It has been hard to keep up with in-home care and supplies for Emily and all of the other household expenses. Lisa works as a nurse-manager, a job she often can do online, but it isn’t enough. 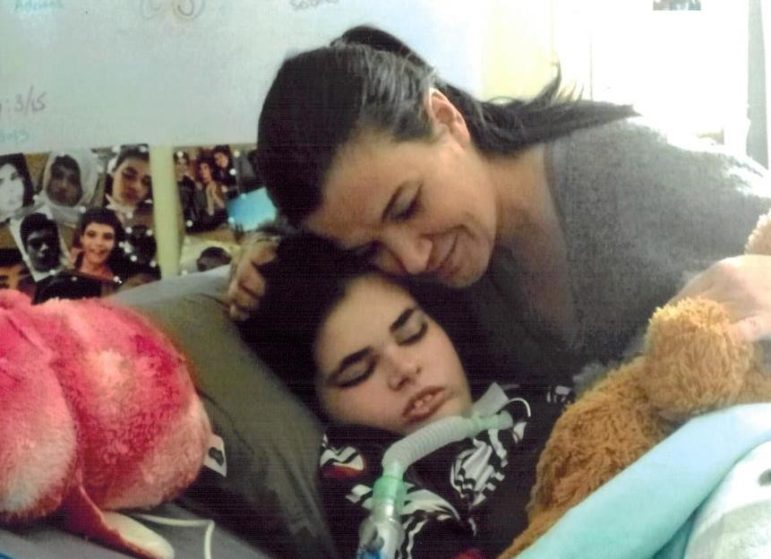 Emily Armstrong, 18, gets a hug from her mother, Lisa Armstrong, at their home in Wassergass.

Then, in January, there was another setback. Lisa was diagnosed with breast cancer and is undergoing treatment.

The Armstrongs are one of three families who will benefit from this year’s Community Outreach Benefit (COB), a daylong block party at St. John’s UCC at 538 E. Thomas St. in Coopersburg. The COB block party will be held from 1 to 7 p.m on Sunday, July 30.

This is the 16th year for COB. Over the years it has raised more than $715,000 to help more than 50 families, several of whom have been Saucon Valley residents, including Shelby Vanvliet, Hellertown, 2013; Carly Ziegler, Hellertown, 2014; Jon Tyson and Aaron Kuhns, Lower Saucon Township, 2015; and Steve Sarko, Hellertown, 2016.

Emily Armstrong was born with cognitive disabilities, but was an active and otherwise healthy young lady. She was doing well in the Palisades School District. Then, in 2015, a severe stomach ailment sent her to Grand View Hospital in Sellersville where she suffered severe sepsis, a pulmonary embolism and cardiac arrest, leaving her unresponsive and on life support–or in a vegetative state, to use a colloquial term. Emily would spend the next four months at Children’s Hospital of Philadelphia, but there was no improvement.

Lisa and Emily’s four sisters–Jessica, Sara, Samantha and Kathryn–decided to care for Emily at home.

Lisa says, “It’s a group effort, her sisters love her, and I know Emily knows that. Yes, it’s hard. I try to work during the day and care for Emily at night.” A team of five or six home-care nurses complete Emily’s care 24/7.

The Armstrongs plan to move back to their former home when reconstruction is complete, perhaps later this year. In the meantime, in addition to getting help with the medical expenses that are not covered, they would like to have a wheelchair-compatible vehicle. Emily can sit in a wheelchair, but it’s just too hard for Lisa and the sisters to manage with their current vehicle.

“We really want to do things as a family,” Lisa says.

As for her cancer treatment, Lisa says she does feel weak and has bad days but remains optimistic and determined. “All the support we have gotten is a huge blessing,” she says.

The COB block party features food, crafts, games for all members of the family and a full day of free music. Performers will include Craig Thatcher Band, Scott Marshall and children’s performer Dave Fry, among others. A raffle with a top prize of $10,000 is a key part of the fundraising. Other beneficiaries this year are Jeanine Greco of Quakertown, who has severe multiple sclerosis, and Donna DeSautels of Upper Saucon Township, who suffered a stroke and severe head injuries from a fall.

There is also a COB Facebook page and event for this year’s Block Party.