“Leaves of three, let it be,” is the saying young children are often taught in order to help them identify and avoid poison ivy, which more people are likely to contract at this time of year and throughout the summer months.

If you come in contact with the oil in the poison ivy plant you could develop a blistery, itchy rash, says Lindy Lee Cibischino, MD, a pediatrician at St. Luke’s Pocono Pediatrics.

“You can get poison ivy any time of the year,” Dr. Cibischino says, “but in the spring, you might not recognize its leaves as they are just budding, and you could be more susceptible.” (Hint: In spring, poison ivy is various shades of red and orange. In the fall, poison ivy can lurk in dead leaves.)

Poison ivy is an irritation of the skin that occurs when you touch the oils on the leaves, Dr. Cibischino says.

“Wash the oils off quickly enough and you won’t have a skin reaction,” she says. That’s why it’s important to wash from head to toe with soap and water when you come indoors, especially if you’re prone to a strong reaction to poison ivy. Dr. Cibischino recommends using unscented baby wipes if you can’t get to a sink.

Many people mistakenly believe that poison ivy is contagious.

Not so, says Dr. Cibischino. 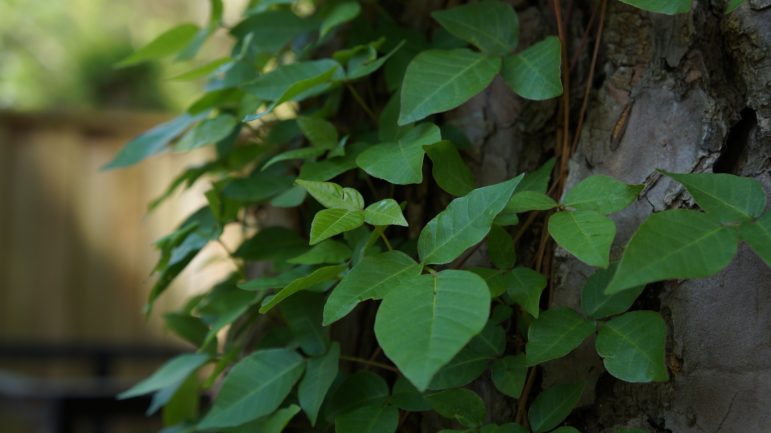 Poison ivy can cause a rash within four hours of exposure or as long as 10 days after exposure.

The rash is most likely to appear on your face and hands first, Dr. Cibischino says. Other areas of your skin that are not as sensitive or as heavily contaminated may break out later, she says. That’s why some people believe it spreads when it doesn’t.

How to treat poison ivy

If you find you have a rash from poison ivy, keep the area clean and dry, Dr. Cibischino says. Topical treatments available over the counter such as calamine lotion and steroid creams will feel cooling and soothing, she says. So will an oatmeal bath.

Antihistamines such as Benadryl also may help to alleviate the itch, Dr. Cibischino says.

You can use topical creams and lotions as long as the area isn’t open and bleeding, she says, adding that “if it is spread everywhere and around your eyes or mouth, you might need to talk to your doctor about an oral steroid or a steroid injection.”

It can take a week or more for the rash to subside and the itching to go away, Dr. Cibischino says.

It’s best to avoid poison ivy when working in the garden by wearing gloves and long sleeves, Dr. Cibischino says.

“Kids tend to get it from playing around in woods or chasing after a baseball that’s in the woods,” she says. “It is an ivy, so it does climb up trees.”