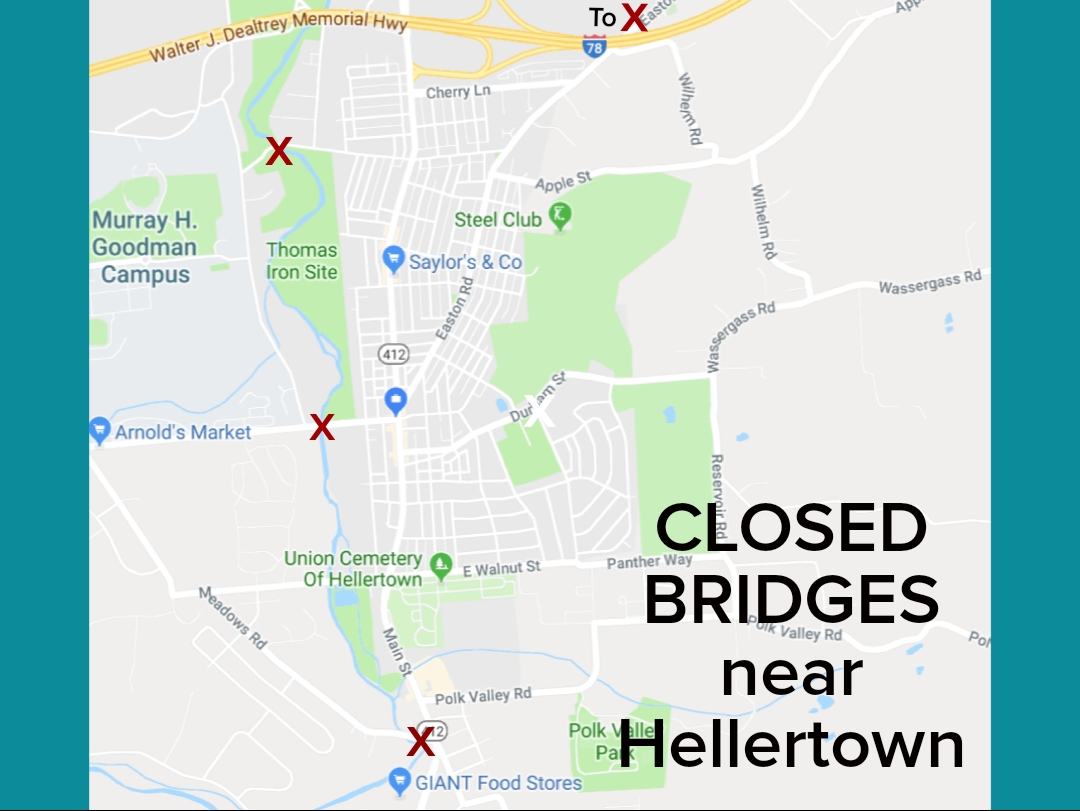 This map shows the four bridges in or near Hellertown that are currently closed. Clockwise, from upper right, are: the metal grate bridge at Easton and Ringhoffer roads (off the map); the Meadows Road Bridge; the Water Street Bridge; and the Seidersville Road Bridge.

UPDATE: As of 2:45 pm Sunday the Water Street Bridge has reopened. According to a source, the Easton Road metal grate bridge has also been reopened.

Following the closure of two bridges near Hellertown Saturday due to structural damage caused by flash flooding, a total of four spans in or near the borough are now out of commission, at least temporarily.

None of the bridges are owned by the Borough of Hellertown or Lower Saucon Township.

The two bridges closed Saturday are the Easton Road metal grate bridge across the east branch of the Saucon Creek by Ringhoffer Road, northeast of town, and the Water Street Bridge (which spans Saucon Creek) on the border between the borough, Lower Saucon Township and the City of Bethlehem.

The PennDOT-owned Water Street Bridge is 80 years old, structurally deficient and scheduled to be replaced over a period of two months next summer.

According to officials, PennDOT engineers will be inspecting it as soon as possible to determine how much damage was caused by the high water.

The metal grate bridge–which is also a PennDOT bridge–will remain closed indefinitely, with a detour around the closure to be established.

The other bridges that are closed were already off-limits to traffic when Saturday’s flash flooding occurred, although at least one of them was surrounded by flood waters.

The Meadows Road Bridge just west of Rt. 412 in Lower Saucon Township is owned by Northampton County and was closed in the spring after it failed a routine safety inspection.

Eventually that crossing will reopen, but whether the current bridge–built in 1858–will be rehabilitated or a new span will be constructed there remains uncertain, along with the timetable for the work.

North of Water Street, a 1930s metal truss bridge known as the Seidersville Road Bridge spans the Saucon Creek, where it serves as little more than an occasional fishing pier today.

The Seidersville Road Bridge is located in the City of Bethlehem–just west of the High Street Bridge that was replaced in 2017–and is also owned by Northampton County.

It was closed in 2011 due to deterioration, and the county has no plans to rehabilitate or replace it, borough officials have been told.

Tell us: Does the closure of one or more of these bridges affect you, and if so, how? Are you satisfied with the state of the bridges in the Saucon Valley area?