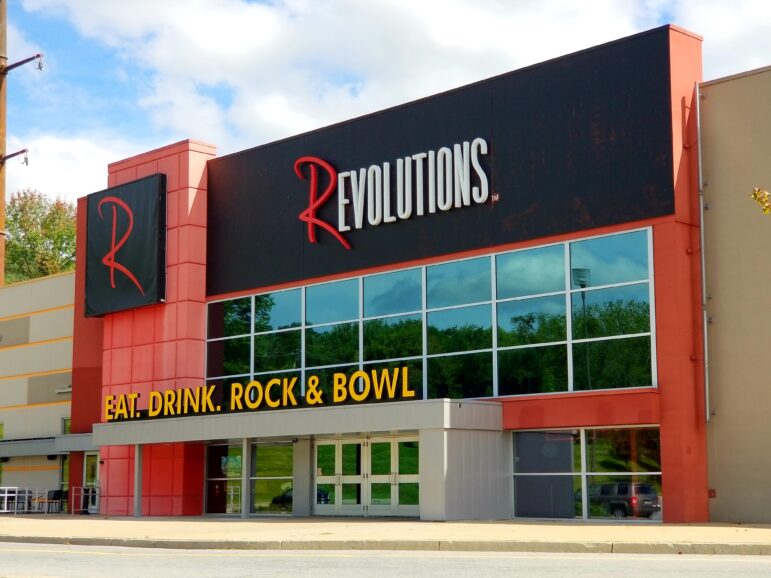 Revolutions at Saucon Valley is a combination dining and entertainment venue that offers a restaurant, bar, dancefloor, stage, bowling alley, arcade and more.

A Lower Saucon Township restaurant, nightclub, bowling alley and entertainment venue was the scene of a burglary over the weekend, police announced in a news release posted on their Crimewatch website Monday.

Revolutions at Saucon Valley in the Saucon Square shopping center on Rt. 378 was the scene of the break-in that resulted in the theft of an undetermined amount of cash from an ATM that was dismantled, police said.

According to police, sometime during the overnight hours of Friday, Sept. 21 to Saturday, Sept. 22 the unknown burglar or burglars forced their way into the building through a rear door and by “smashing a hole through the wall.”

The rear of the building is accessible via an access road that connects to the parking lot at one end and a gated road at the other. It is only open to emergency and delivery vehicles.

“The actor(s) went through numerous offices and dismantled an ATM inside the building, making off with an undetermined amount of cash,” police said.

Anyone who may have observed anything suspicious in the area of Revolutions or who has information related to the burglary is asked to call township police at 610-317-6110 or submit a tip via the Crimewatch page.