The National Weather Service has issued a winter weather advisory for the Lehigh Valley including the Hellertown area for a wintry mix of precipitation including freezing rain overnight Monday and early Tuesday. 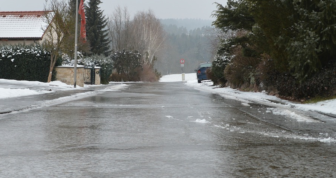 According to the advisory, which is in effect from 10 p.m. Monday until 7 a.m. Tuesday, “total snow accumulations of up to one inch and ice accumulations of a light glaze (are) expected” across the Lehigh Valley, the southern Poconos and northwestern New Jersey.

A winter weather advisory means periods of snow, sleet or freezing rain will cause travel difficulties, and that motorists should expect slippery roads, limited visibilities and use caution while driving.

Although snow and ice events are not uncommon in mid-winter, they have been rare since the winter of 2018-2019 officially began in December.

So far this season, the only snowfall to speak of fell during a freak 8-inch snowstorm Nov. 15.

That storm was followed by the coldest Thanksgiving in a century, when temperatures topped out in the mid-20s, but the weather pattern then shifted to a mild, wet one for December, leaving many area residents asking “where is winter?”

On Tuesday temperatures are forecast to climb into the upper 40s, with rain expected to fall much of the day.

The National Weather Service predicts that temperatures will return to more seasonable levels–with highs in the 30s and lows in the 20s–after that.

There is a slight chance of snow on Saturday night and Sunday, according to the latest NWS forecast.

“A two- to four-hour period of freezing rain is expected Monday night,” lead forecaster Josh Adams wrote Monday. “A few slick spots will be possible Tuesday morning on untreated secondary roads. But for the most part, the Tuesday morning commute should be alright. Total ice accumulation of up to a tenth of an inch (is expected).”