A vacancy on the nine-member Saucon Valley School Board was filled Tuesday when the board voted to appoint parent Edward Andres to the seat vacated by Linda Leewright, who resigned earlier this month.

Andres, an attorney with the Bethlehem law firm of Corriere and Andres LLC and a Lower Saucon Township resident, will fill the seat until the end of Leewright’s unexpired term in December. He also has the option to seek election to the board in this year’s election, in which five school board seats are open.

School board members serve four-year terms, are volunteers and must be residents of either Hellertown borough or Lower Saucon Township.

There were a total of four candidates who applied to fill the vacancy. In addition to Andres, Robert Phillips, Robert Flowers and Ron Salmon, who was unable to attend the meeting, also applied.

Andres said he is the father of three children attending grades four, eight and eleven, although in response to a question from school board member Sandra Miller he clarified that only his youngest child is enrolled in the Saucon Valley School District.

“All three of them have, at different years (attended district schools),” he said. 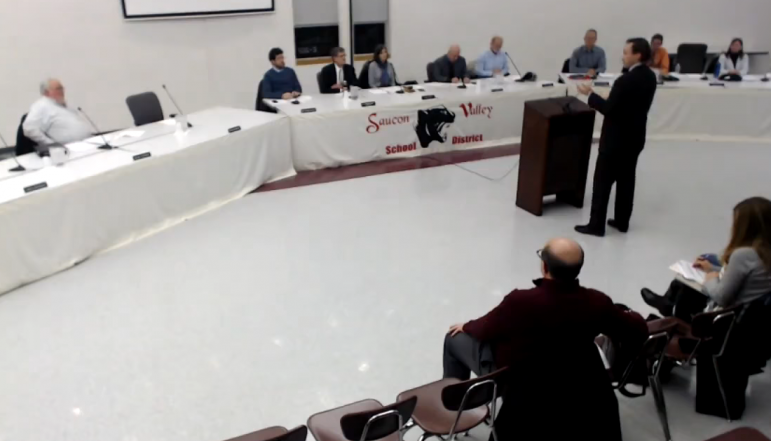 Attorney and parent Edward Andres addresses the Saucon Valley School Board Tuesday, prior to his appointment to fill a vacancy on the board.

“I can empathize with all parents here that want a quality education for our kids,” Andres said. “I believe that is for all the children. So, for whatever level you are, whatever grade you are, whether it’s the strongest students or the ones who have the challenges, every child needs to be challenged at their level and needs to grow because that’s what we want our children to do. We want them to grow academically.”

“We want it to be a school that is safe, healthy and positive for their welfare,” he added.

Andres said that if appointed he would be “sensitive to the needs of the taxpayer” because “we don’t want to break their budgets.”

He noted that he has “a long history of service to our community,” primarily in the area of youth sports. In the past he has also participated in mock trials and in Career Day, he said, and as a solicitor he serves on various committees and boards throughout the area.

To listen to the presentations by the other school board member candidates, click here to view the YouTube video of the meeting. Their interviews begin at 14:47.

“We have four very great candidates to pick from,” board president Susan Baxter said at the conclusion of their presentations. “All four of these candidates could easily sit up here and be welcome to be part of our board.”

Board member Tracy Magnotta was absent from the meeting, and Miller requested that the vote be delayed in order for her to be able to participate in the decision and also to allow Salmon to appear before the board.

“It was rather quick on how this was processed,” she said. “It will give us a chance to make sure that we have heard from all the candidates.”

Baxter said Magnotta told her prior to the meeting that Magnotta felt badly about being unable to attend the meeting at the last minute, but said the process should move forward without her and without delay if possible.

In a straw poll to narrow the field of candidates, Andres received four votes and Phillips received two. Board vice president Shamim Pakzad, a Lehigh University professor, abstained from voting, because he said Flowers is his provost for faculty affairs.

Board members then voted in two rounds, for Phillips first, and for Andres second.

Andres was then immediately sworn in to office by Baxter and took his seat.

“Thank you to everyone else, and thank you to (the) fellow candidates,” Andres said.

Dettmar encouraged Andres and the other candidates to consider running for a full-term seat on the board this year.

Board meetings are normally held on the second and fourth Tuesday of each month at 7 p.m. in the high school Audion room. Meeting agendas are published in advance on the district website under the School Board tab.