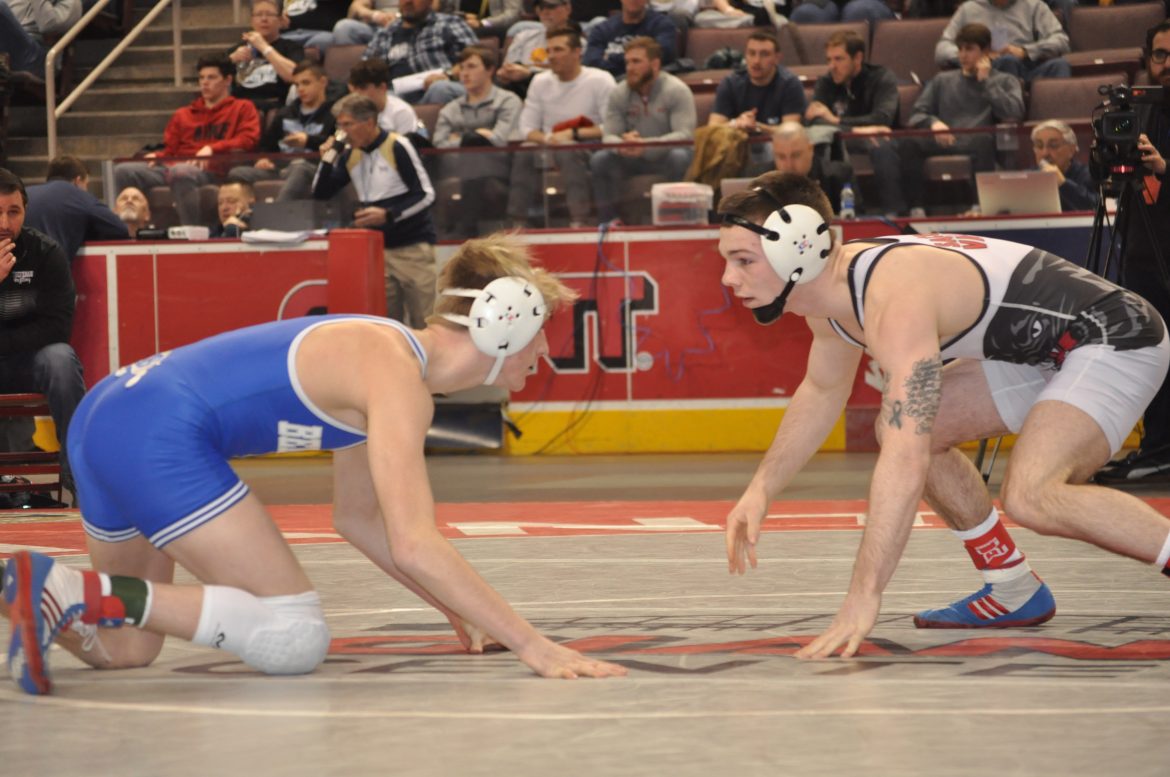 Saucon Valley’s Josh Jones will wrestle for the gold!

Four Saucon Valley Panther wrestlers took to Hershey’s, Giant Center mat on Friday night to battle for their position on the PIAA State Wrestling Championships podium.  Josh Jones (132) and Matt Arciuolo (160) led the way as they both competed in the semifinals.  Thomas Spirk (138) and Nick Rosengrant (145) continued to compete through the consolation bracket.

Jones won and will wrestle for gold against Ty Varndel of Cambridge Springs. Jones defeated Varndel last year in the state semifinals 10-0.  Arciuolo fell in the semis and dropped to the consolation bracket.  He did win his consolation bout and will now, once again, compete against Tyler Stoltzfus of St. Joseph’s Academy.  They will wrestle for 3rd Place.  Arciuolo defeated Stoltzfus 6-3 in the quarterfinals. 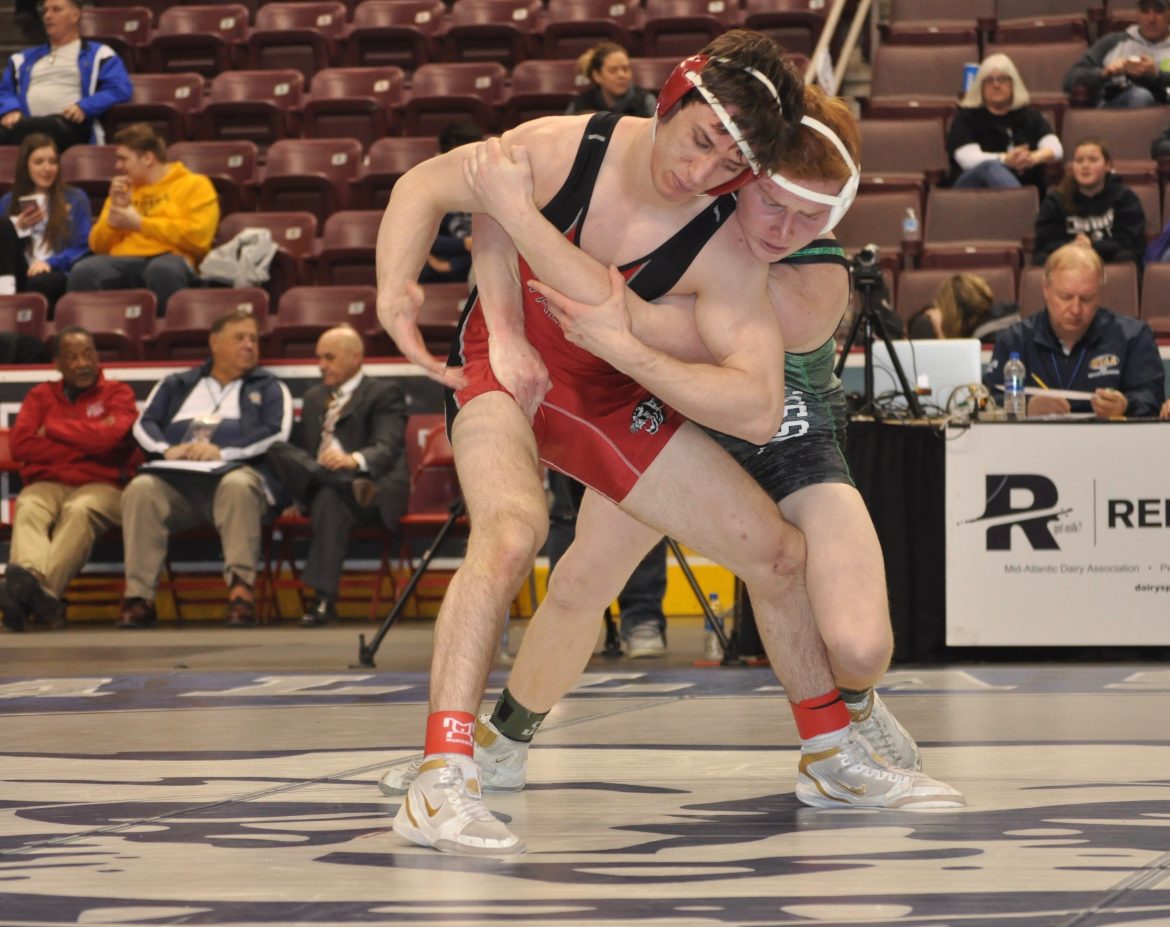 Panther junior Matt Arciuolo lost in the semis, but bounced back and will wrestle for 3rd Place.

In his semifinal match, Jones was impressive.  Last year’s silver medalist, perhaps drawing on his extensive experience, was cool, calm, collected and patient. Jones was all business in his semifinal bout against Bedford’s Kaden Cassidy.  Cassidy scored first with a first-period takedown, but Jones appeared un-phased.  At the end of the opening period, Jones trailed 2-0. 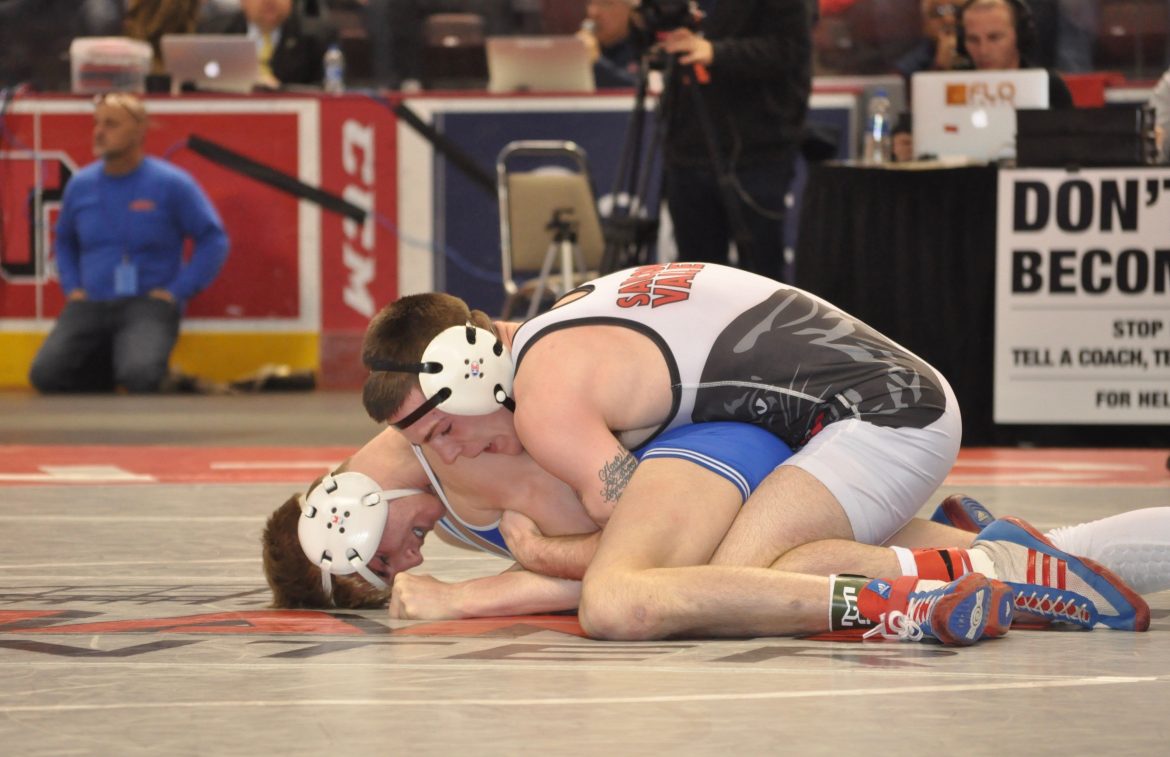 During their semifinal matchup, Jones continued to dig into Kaden Cassidy in order to finally get his near-fall points.

It was a scoreless second period, however, Cassidy received a stalling warning as he seemed to clam up with Jones on top.  Jones came close a couple times trying to turn Cassidy, but just couldn’t quite get Cassidy’s shoulders turned enough toward the mat to get the near-fall points.  Cassidy seemed to be in a defensive mode and never tried to improve from his defensive position.  The second period ended with Cassidy still ahead by a 2-0 score.

Jones chose the top position to start the third period and went right back to work trying to turn Cassidy for back-points.  About half way through the final period, Cassidy was again called for stalling and a point was awarded to Jones which made the score 2-1.  As time ticked down Jones appeared to stay with the game plan and, with confidence, continued to dig and work for a turn.  Finally, Jones was able to clearly turn Cassidy.  With seven seconds remaining in the bout, the referee awarded Jones two near-fall points.  Jones won 3-2 and will return to the PIAA Championship Finals. 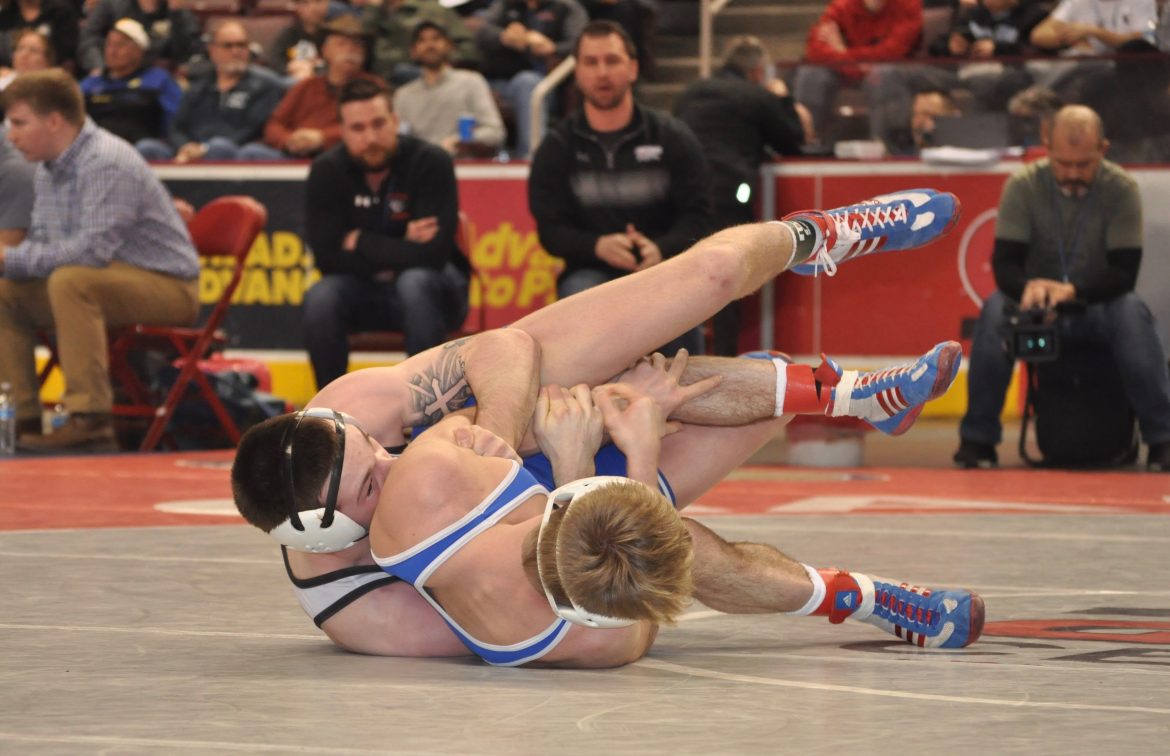 Showing a whole lot of patience and composure, Josh Jones finally gets his near-fall and advanced to the 2019 championship final. 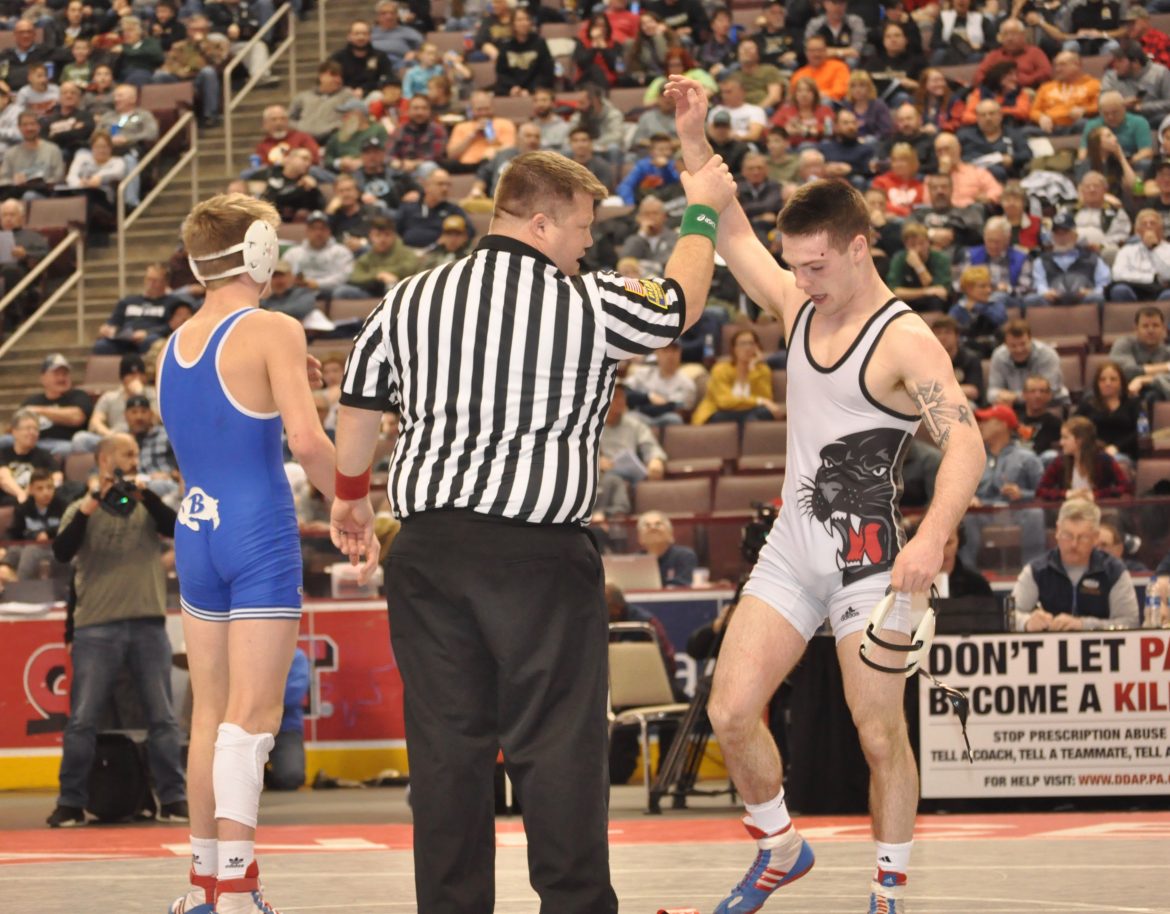 The next stop for Josh Jones will be the 2019 finals. 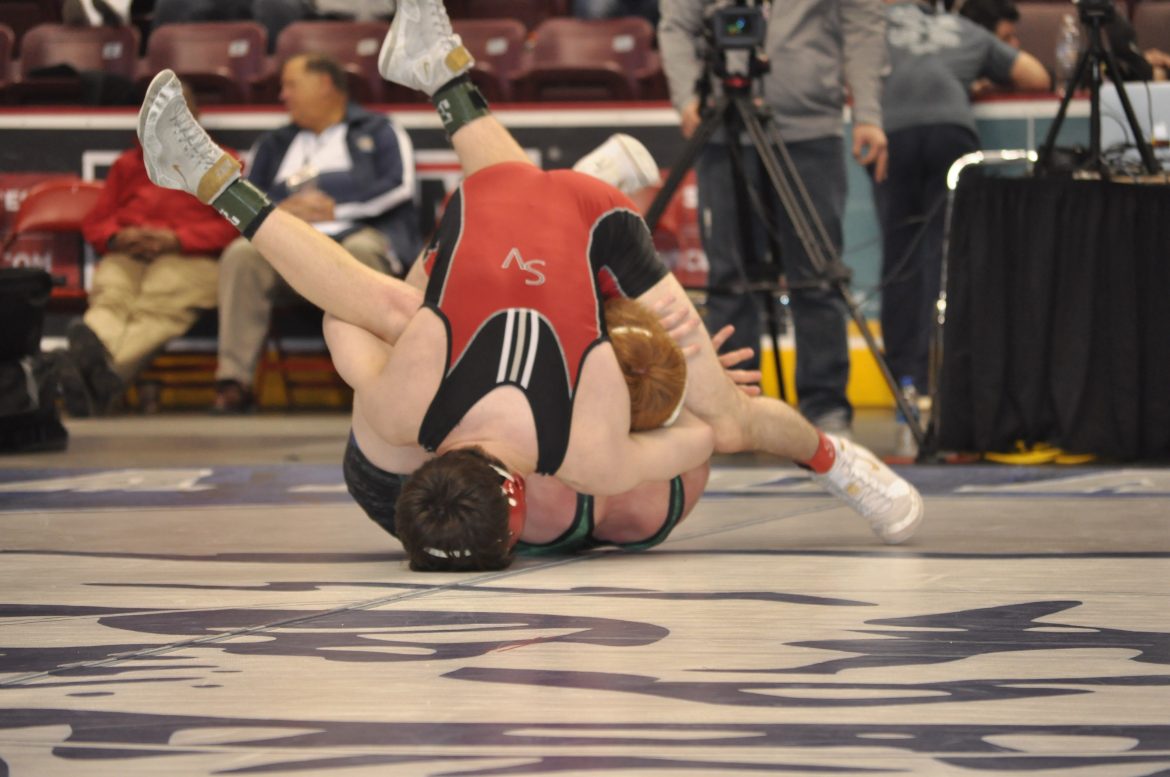 Matt Arciuolo earned a major decision and will now wrestle for 3rd Place.

Up Next:  Tomorrow at 2 p.m. four Panthers will wrestle in the 2019 PIAA Championship Wrestling medal round.  When the final whistle blows, Josh Jones (132), Nick Rosengrant (145), Thomas Spirk (145), and Matt Arciuolo (160) will all be climbing onto the PIAA podium.