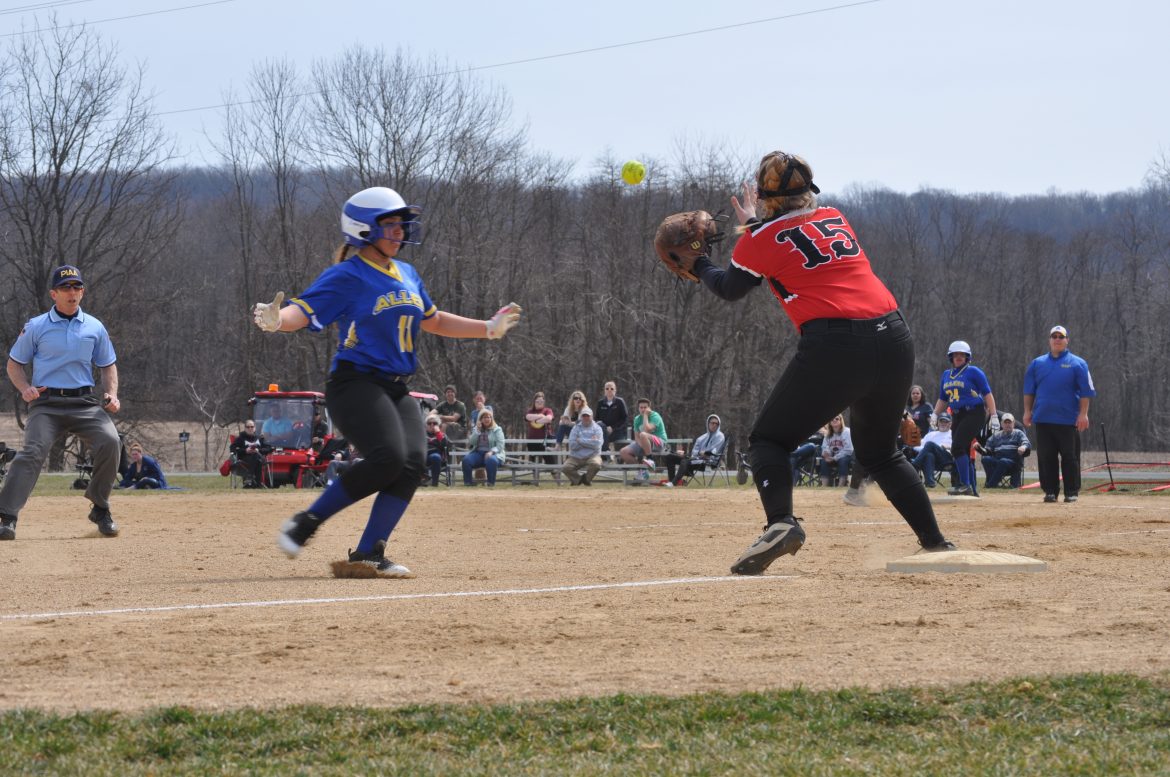 Panther freshman Kellie Boyle (15) gets ready to put the tag on a Canary runner.

On a bright and breezy Saturday afternoon, Saucon Valley hosted the Willam Allen Canaries in a little independent softball action.  The Canaries are out of the East Penn Conference while the hometown Panthers compete in the Colonial League.  Sporting a lineup that often features seven freshmen and sophomores, Saucon had its work cut out for them.  Especially, against a big school like William Allen.  The young, Saucon Valley Panther softball team is experiencing some growing pains, but they continue to improve. 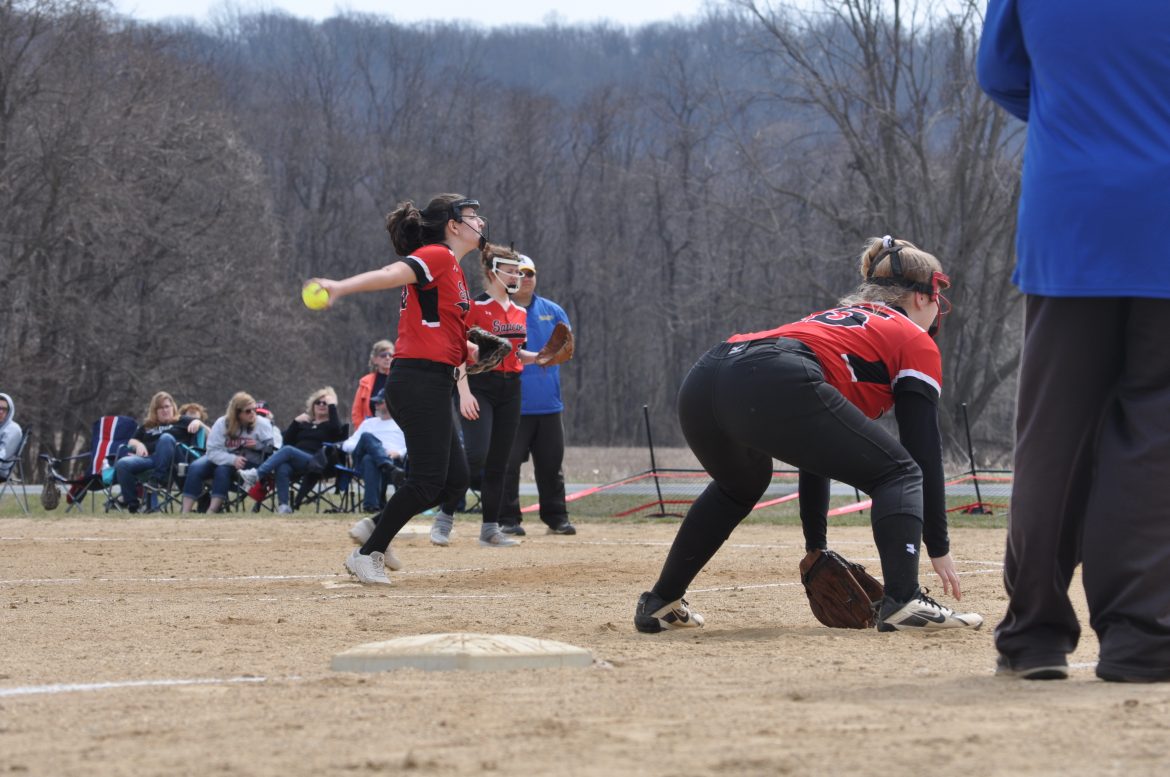 Freshman Jenny Barbera started strong on the mound against the Allen Canaries.

It was a little bit of a feeling-out process as the Panthers and Canaries were deadlocked 0-0 after two innings of play.  The Canary bats, however, heated up quickly.  In the top of the 3rd inning Allen tallied six hits including a double, triple and homerun, that paved the way to an explosive inning which brought a 7-0 lead. The Panthers battled back in the bottom half of the 3rd with Jaclyn Barbera’s 2-out double that allowed two Panthers to cross the plate.  After three innings, the Panthers trailed 7-2.

“This is a young team with a lot of work ahead of us. We are getting better every day and our hard work and fundamentals will keep us in games.  I’m certain if we continue to work hard, play aggressive and don’t give up, these girls are going to be winners.”

Allen picked up three more runs in the top of the 4th when a bases-loaded double down the 1st base line was good for three more Canary runs. Aggressive base-running allowed Saucon Valley to fight back with a couple more runs of their own in the bottom half of the inning.  Juniors Megan Patriarca and Rachel Schoch each stole their way home courtesy of a couple pass-balls. 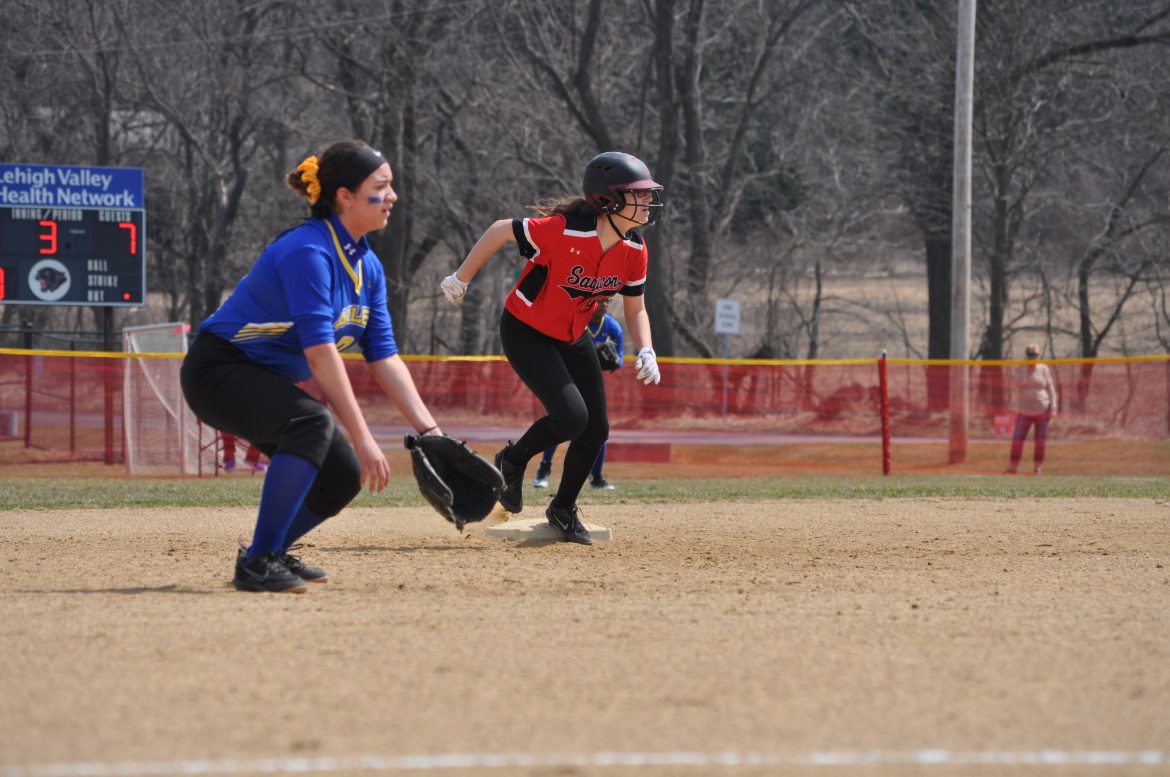 Morgan Mixa and the Panthers showed they were aggressive on the bases against Allen.

Each team scored one run in the fifth inning.  The Panthers’ Jaclynn Barbera led off with a sharply hit double to left field and was later batted in by Megan Patriarca’s single.

Saucon Valley gave up three hits in the sixth inning but minimized the damage to a single run scored thanks to some solid defense.  When it was the Panthers turn, they battled back with a two-out rally.  Panther freshman, Kailea Danubio, was awarded 1st base after being hit by a pitch and Jenny Barbera took advantage of her at-bat with an infield single.  Then, with runners on 1st and 2nd base, Jackie Barbera ripped a triple into right center field that allowed her teammates to score.  Barbera, then scored on a pass ball.  The sixth inning closed out with the Panthers clawing back to a 12-8 deficit. 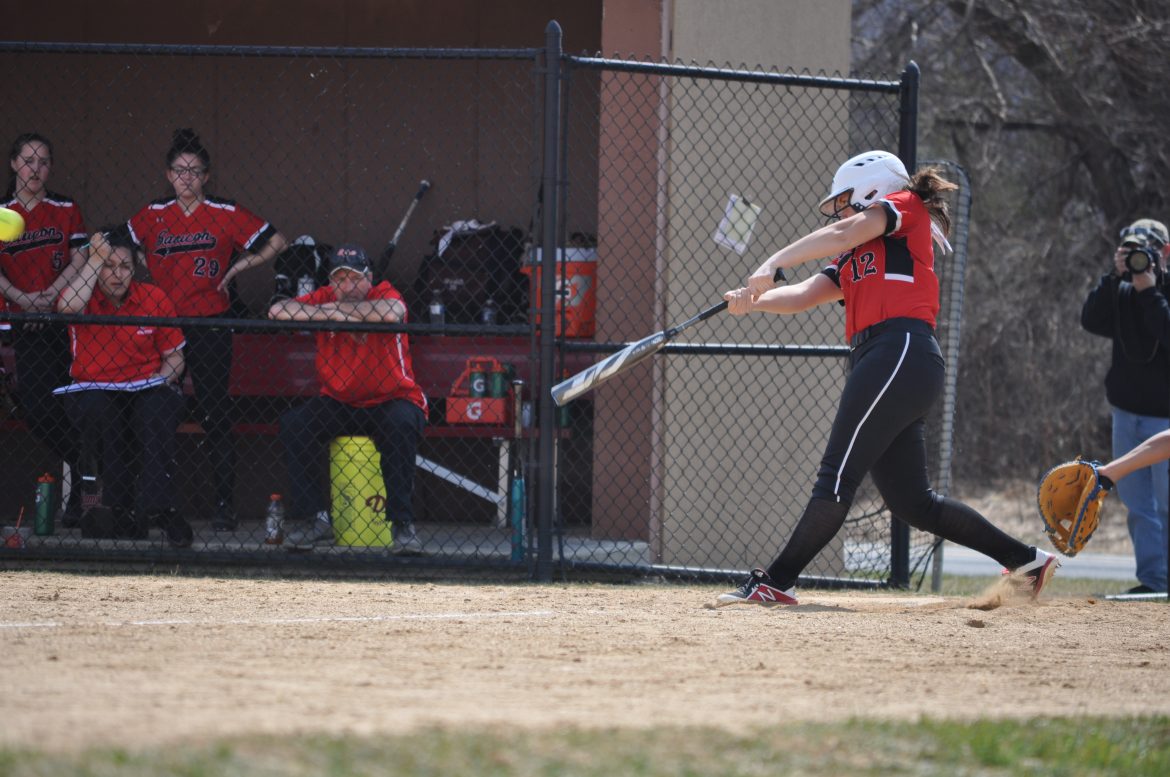 Saucon sophomore Jackie Barbera had a hot bat against the Allen Canaries.

A Canary leadoff triple in the top of the seventh led to an Allen run scored when it was backed by a two-out double.  The Panthers fought their way out of the inning, but were unable to generate any offense in their last at-bat.  The Canaries defeated the Panthers 13-8. 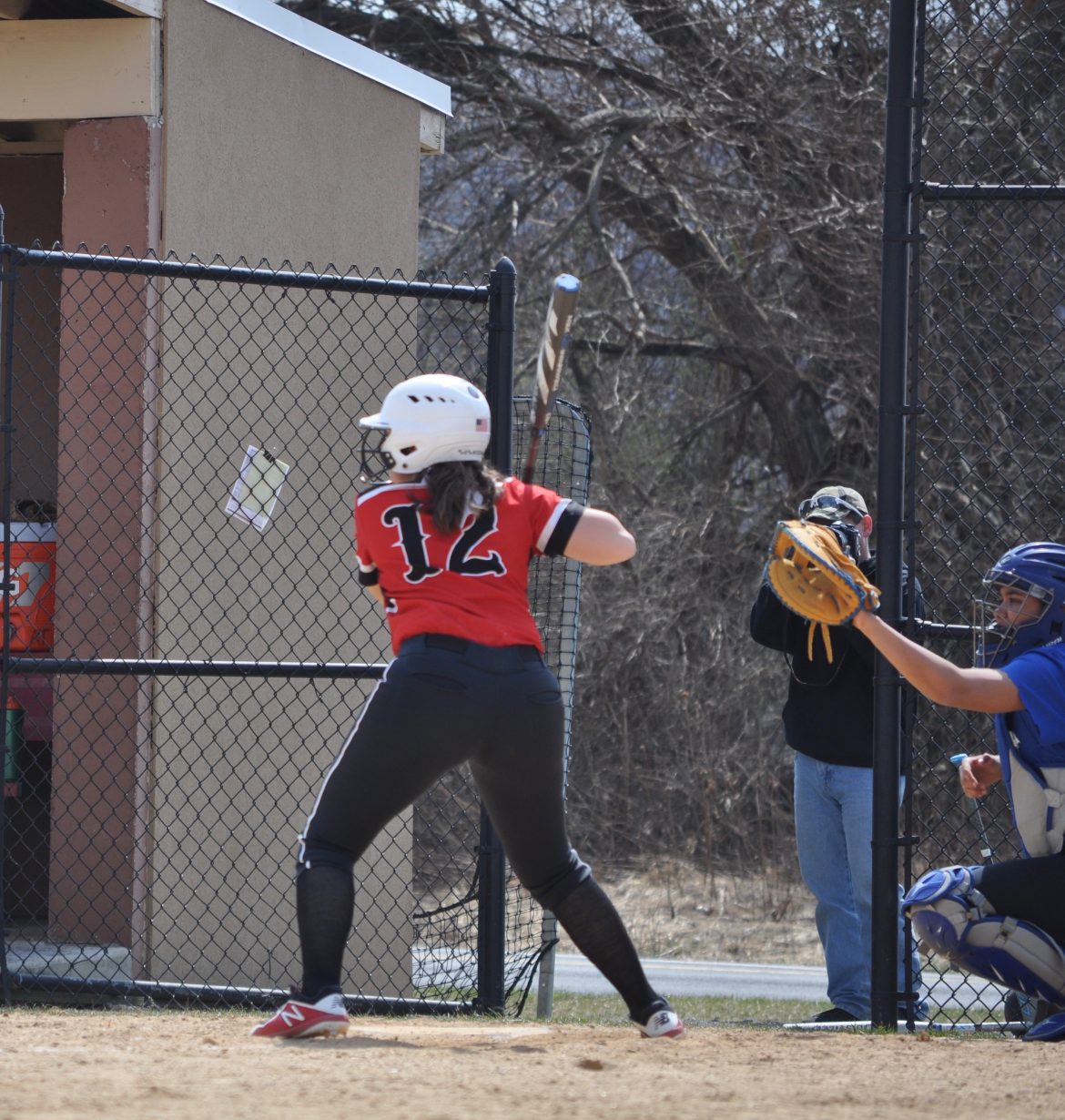 Saucon Valley sophomore Jackie Barbera had a hand in six of the Panthers eight runs.

Panther Player of the Game:  Sophomore Jaclyn Barbera played solid defense and went 3 of 4.  Barbera’s two doubles and a triple were good for five runs batted in.

Up Next:  The Panthers are scheduled to host the Palmerton Blue Bombers on Monday, April 1st (4:15 p.m.) 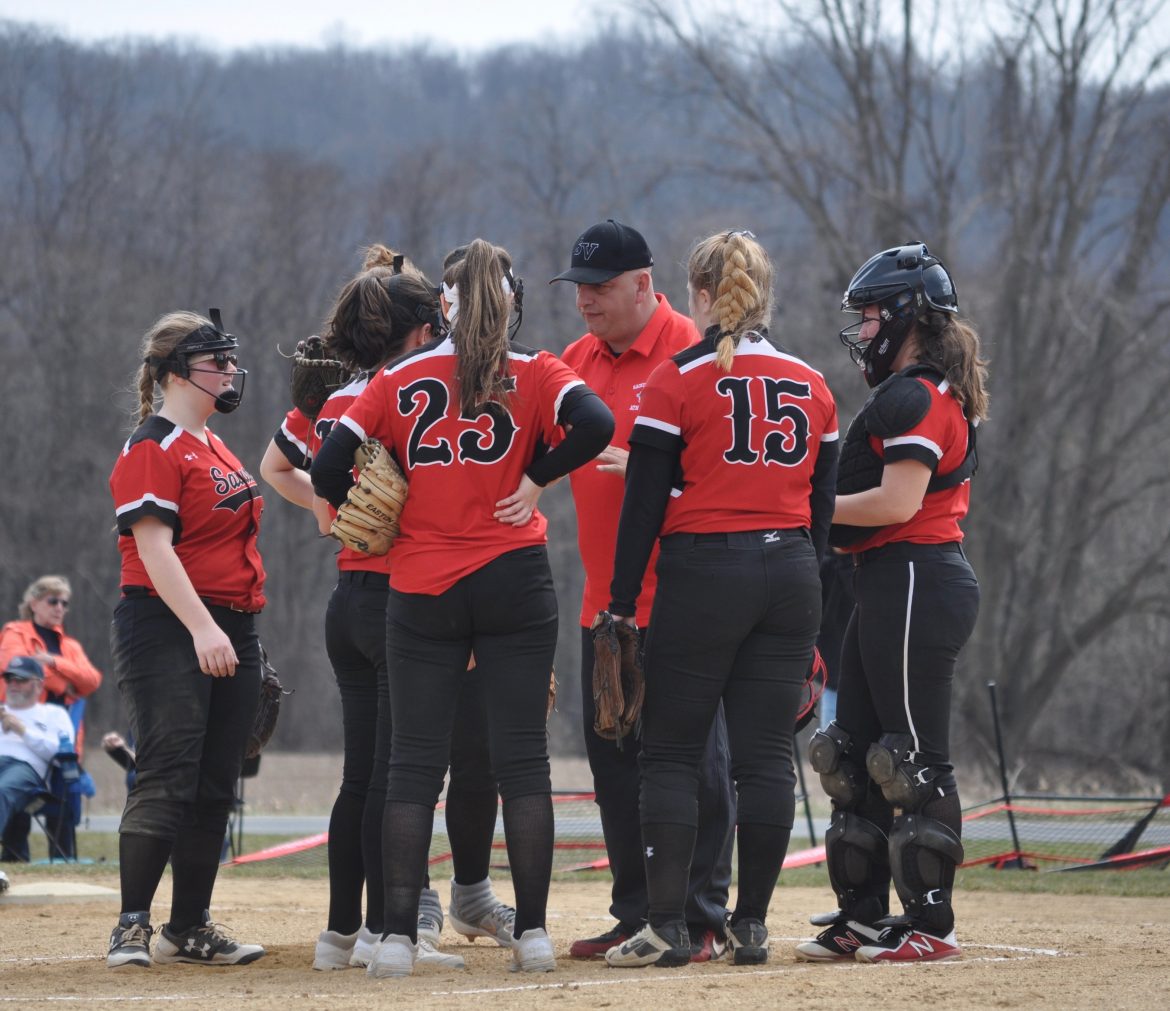