Daniel Plavin, who once was part of St. Luke’s Future Physicians Program at Jim Thorpe High Area School, and Alexandra Rebuck of Danville, were selected from hundreds of applicants from throughout the world.

Out of the 93 rurally-located family medicine residency programs in the U.S., St. Luke’s Miners Campus’ is one of just 34 nationwide–and the only one in Pennsylvania–that are accredited as integrated rural training tracks. The program, launched last year, was recently notified of its reaccreditation by the Accreditation Council for Graduation Medical Education.

“Residents with local ties are more likely to settle where they train,” said Program Director Thomas McGinley, MD. “The goal is to develop a new generation of physicians to serve Coal Country and other rural areas facing doctor shortages.”

Plavin first became familiar with St. Luke’s while a senior at Jim Thorpe High Area School when he was part of St. Luke’s Future Physicians Program. The experience led him to American University of the Caribbean School of Medicine, Sint Maarten after graduating from Binghamton University State University of New York with a Bachelor of Science in Chemistry. St. Luke’s Family Medicine Rural Training Track was his first choice for a residency. 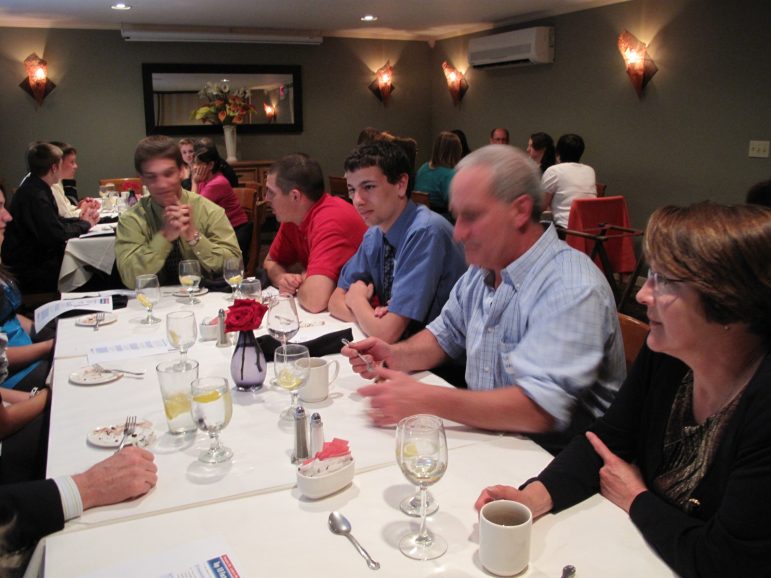 The 25-year-old lives in Lake Harmony and is an EMT and firefighter for the Penn Forest Volunteer Fire Co. No. 2. He said the residency program will allow him to be close to his family and stay involved in the community, which he said is key to understanding and helping patients.

Rebuck, 28, said she became interested in medicine after she shadowed doctors while earning a Bachelor of Science degree in biology from Susquehanna University in Selinsgrove. She will graduate in May from Philadelphia College of Osteopathic Medicine.

Having grown up in Danville, she said she knows how hard it is for rural patients to access care.

“I feel indebted to the community I grew up in, and I just want to give back,” she said.

The three-year Family Medicine Rural Training Track has two residents in each year, having welcomed its first class in July. The residents spend three months in the first year at St. Luke’s Hometown Rural Health Center in Tamaqua, and nine months there in both the second and third years.

St. Luke’s Hometown Rural Health Center is a national model–honored by the National Rural Health Association with its 2018 Outstanding Rural Health Organization award. The award, which recognizes St. Luke’s commitment to expanding and improving access to health care in Carbon and Schuylkill counties’ Coal Country, was presented in May at the NRHA’s Annual Rural Health Conference and Rural Hospital Innovation Summit in New Orleans.

St. Luke’s Hometown Rural Health Center is one of St. Luke’s several federally designated rural health centers in Coal Country. Others are located in Nesquehoning and Ringtown. (A fourth clinic that recently opened in Lansford is awaiting federal designation.) These special clinics accept private insurance, medical assistance, Medicare and patients who are self-paying.

The rural health clinics handle thousands of patient visits annually, delivering high-quality primary care and community outreach programs to underserved populations. Among the innovative programs implemented by the Rural Health Clinics has been the Flinders Chronic Condition Management Program, an interventional initiative that has focused on improving the health of patients with diabetes and decreasing emergency department utilization among patients who had previously demonstrated unusually high rates of emergency department usage.

St. Luke’s Miners itself, once a struggling hospital before joining St. Luke’s, has added dozens of specialty physicians over the past decade and now earns the highest ratings from the annual quality and safety hospital review conducted by the Centers for Medicare & Medicaid.

Note: This area health news is brought to you in partnership with St. Luke’s University Health Network.