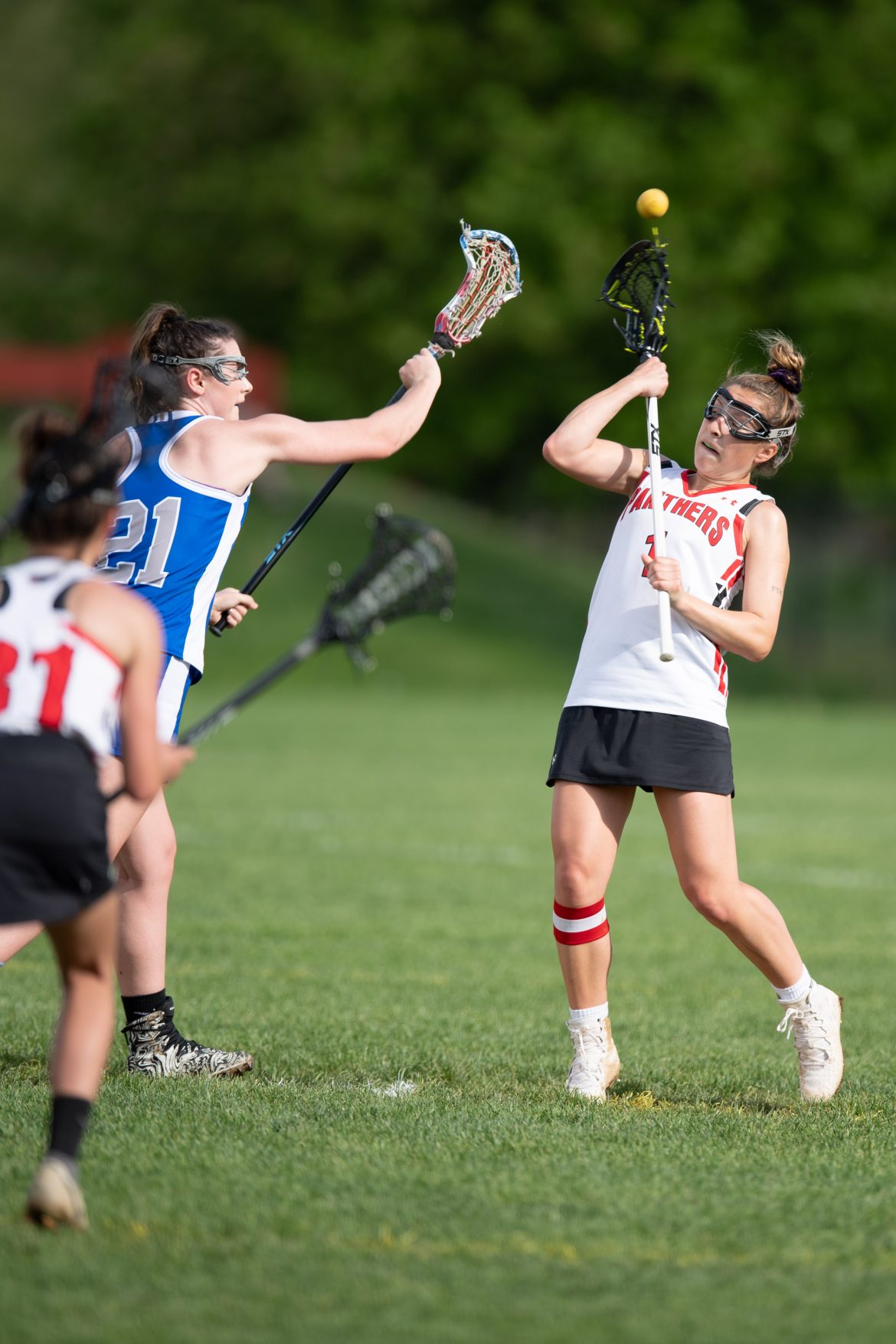 Camryn Zavacky taking the draw for the Saucon Valley Panthers.

The Saucon Valley girls lacrosse program seems to be at the top of their game right now.  The Panthers started the season red-hot with a 6-0 record including a signature win over the Easton Red Rovers (13-3).  In game seven, Saucon did drop a tough one to a quality Freedom Patriot (13-4) opponent.  But, since stumbling to Freedom, the Panthers rattled off another six straight victories heading into Monday’s clash with the Nazareth Blue Eagles.

Saucon Valley wasted little time getting onto the scoreboard against the Blue Eagles.  On their first possession, and only seconds into the game, the Panthers connected on a series of passes that earned them the first score.  Camryn Zavacky took the opening draw for Saucon and sent the ball toward Brooke Riefenstahl.  After battling and securing possession, Riefenstahl hit Kat Naiburg with a pass in the Blue Eagle zone.  Naiburg turned and targeted the cutting Camryn Zavacky and hit her in stride with another crisp pass.  Zavacky finished the sequence by beating the goalie for the opening score.  It was an impressive start for the Saucon Valley Panthers. 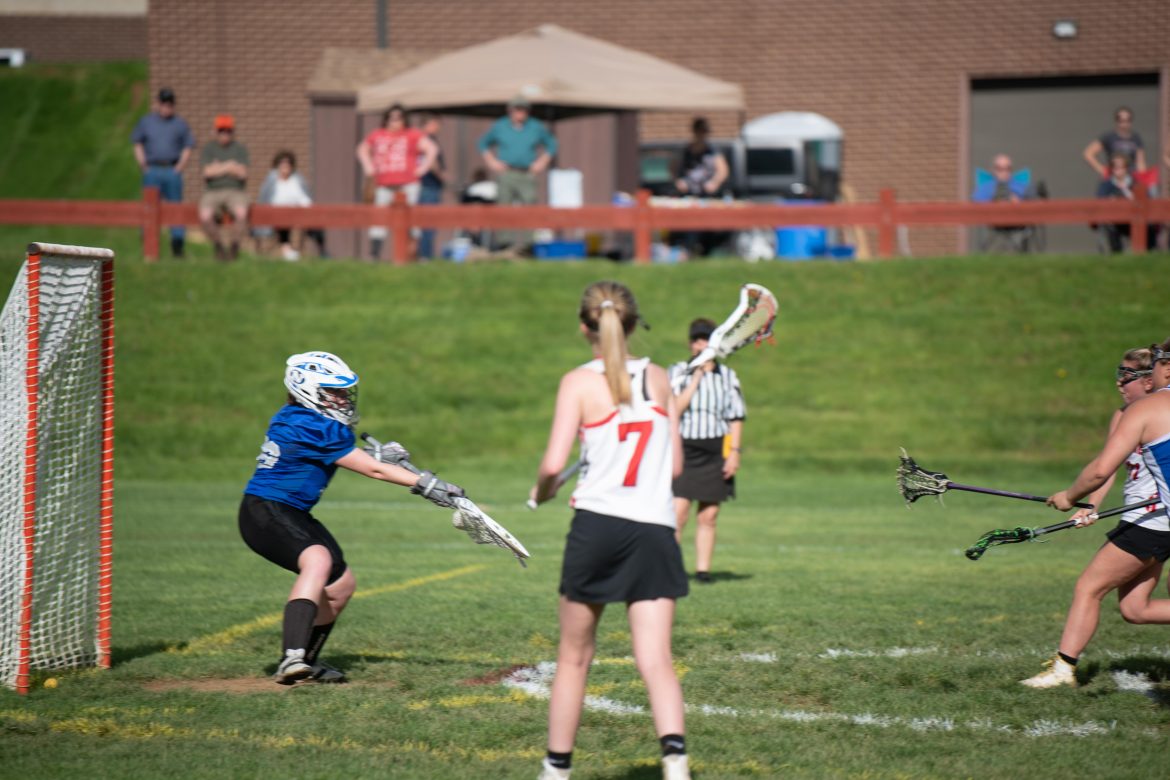 Another shot into goal for the Panthers!

Nazareth tried to answer, but could not break through the stingy Saucon Valley defense.  Even after claiming and reclaiming two offensive rebounds and re-firing the ball at the Saucon Valley net, Nazareth could not solve goalkeeper Audrey Holland and the other Panther defenders.

Tenacious defense combined with the early tic-tac-toe passing must have set the tone for these powerful Panthers.  With goals scored by Maria Donahue, Brooke Riefenstahl (2), Kiele Riefenstahl and Katherine Naiburg, Saucon Valley jumped out to a 6-0 lead with 16:12 remaining in the 1st half.  Nazareth, hoping to halt the Panthers momentum, was forced to call time-out and regroup. 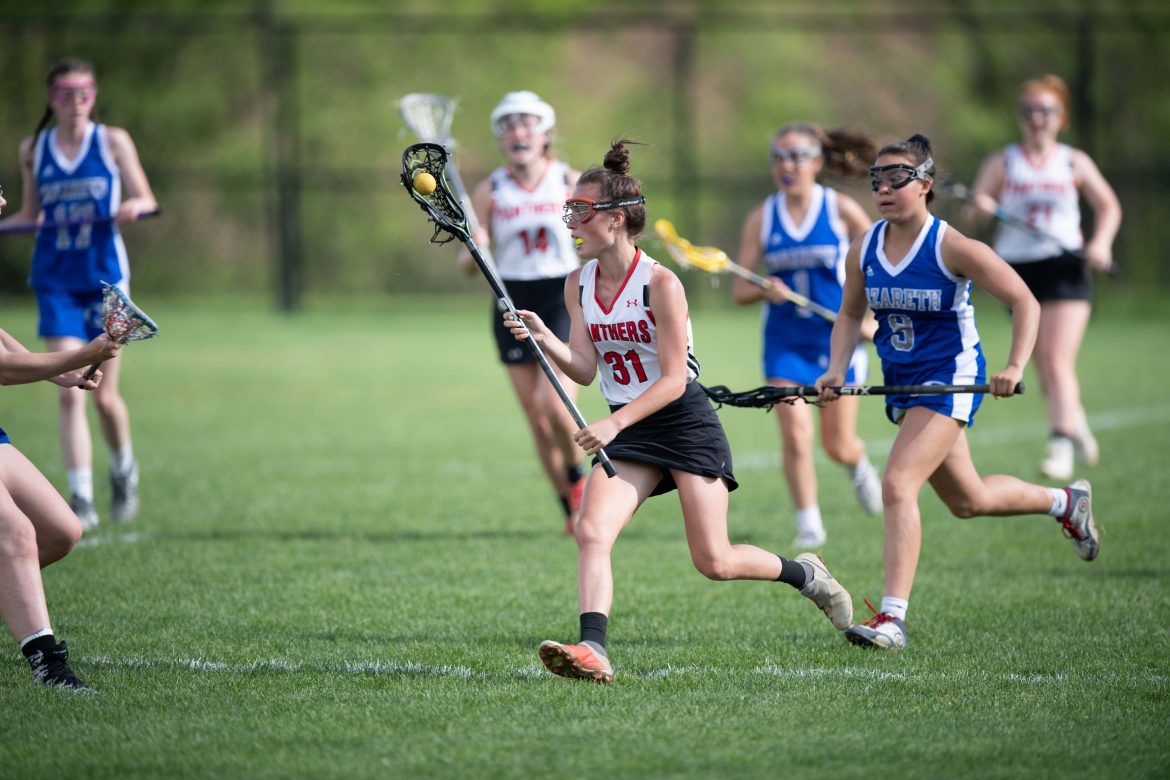 When play continued, it became obvious that the Blue Eagle timeout was ineffective.  Behind a stout defense and an unselfish offense, the rest of the first half belonged to Saucon Valley.  The Panthers shared the ball and shared the scoring.  Goals by Camryn Zavacky, Megan Kane (2), Emerson Shauger (3) and Siobhan Coakley sustained the Panther pressure.  Kane’s second goal activated an early mercy-rule while Donahue’s score led to a Blue Eagle goalie change.  At the halftime break, Saucon Valley was firmly in control and held a 14-0 advantage.  Eight different Panthers were credited with scoring first half goals. 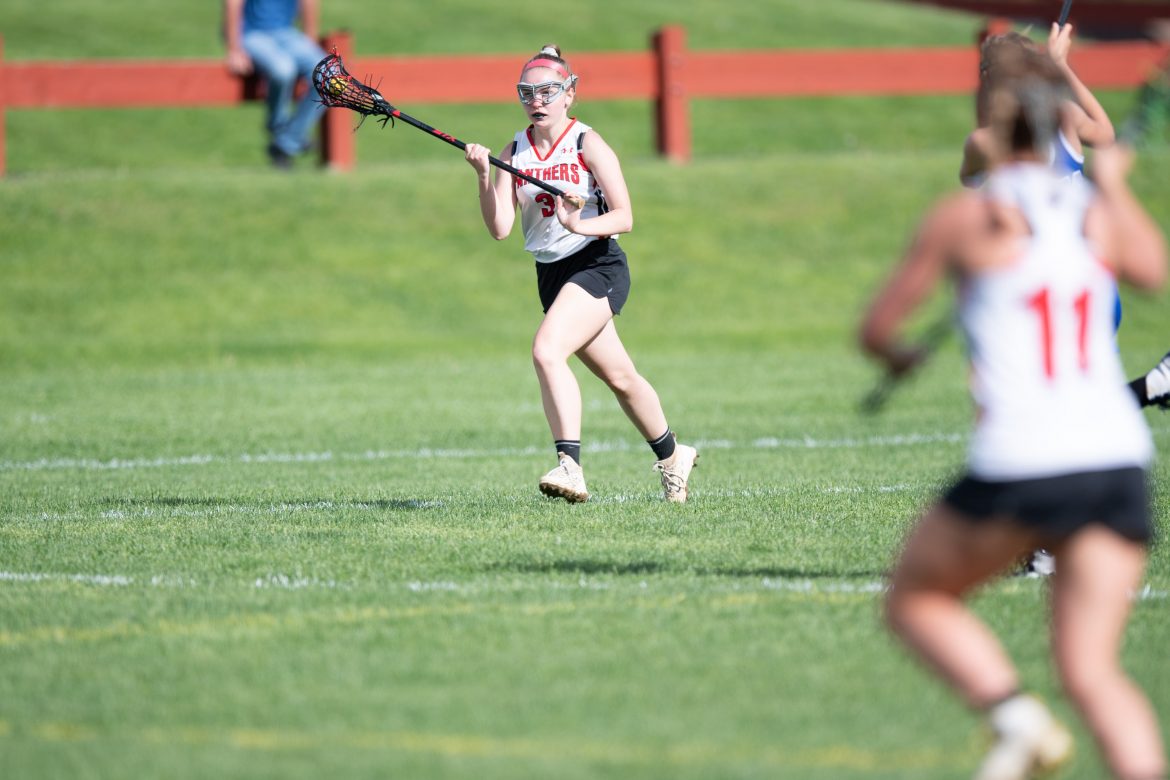 Saucon Valley’s Megan Kane (#3) on her way to starting the mercy-rule clock.

With the mercy-rule clock already running the game seemed to slow down in the 2nd half.  But, Saucon Valley’s Kiele Riefenstahl made good on a wrap-around shot at the 18:42 mark and Maria Donahue earned a hat-trick at 15:48 to make the score 16-0.  Nazareth finally got on the scoreboard with 12:15 remaining in the game.  But, four minutes later Emerson Shauger found the back of the Blue Eagle net for the final Saucon Valley point.  Nazareth did hit the target two more times to end the game, but overall it was pure domination by the Panthers.  Saucon Valley improved to a 13-1 record with an impressive 17-3 victory over the Nazareth Blue Eagles. 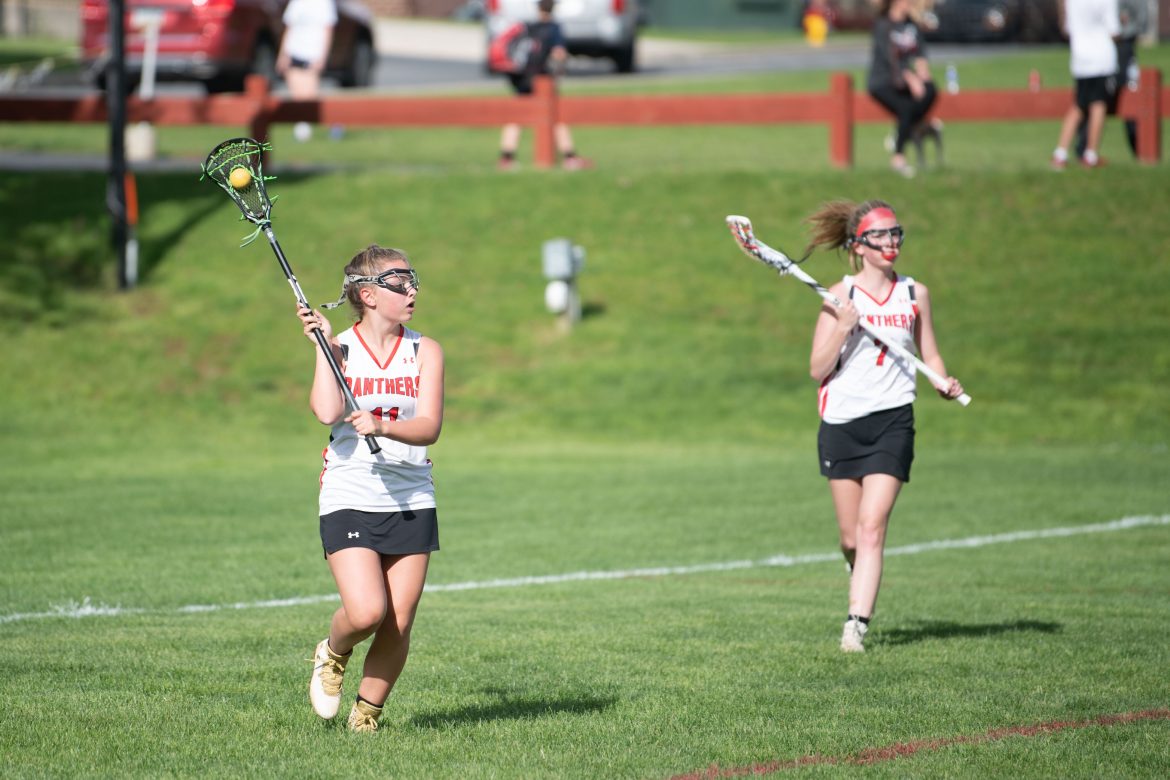 Emerson Shauger (#11) had a great day at the office for the Panthers. 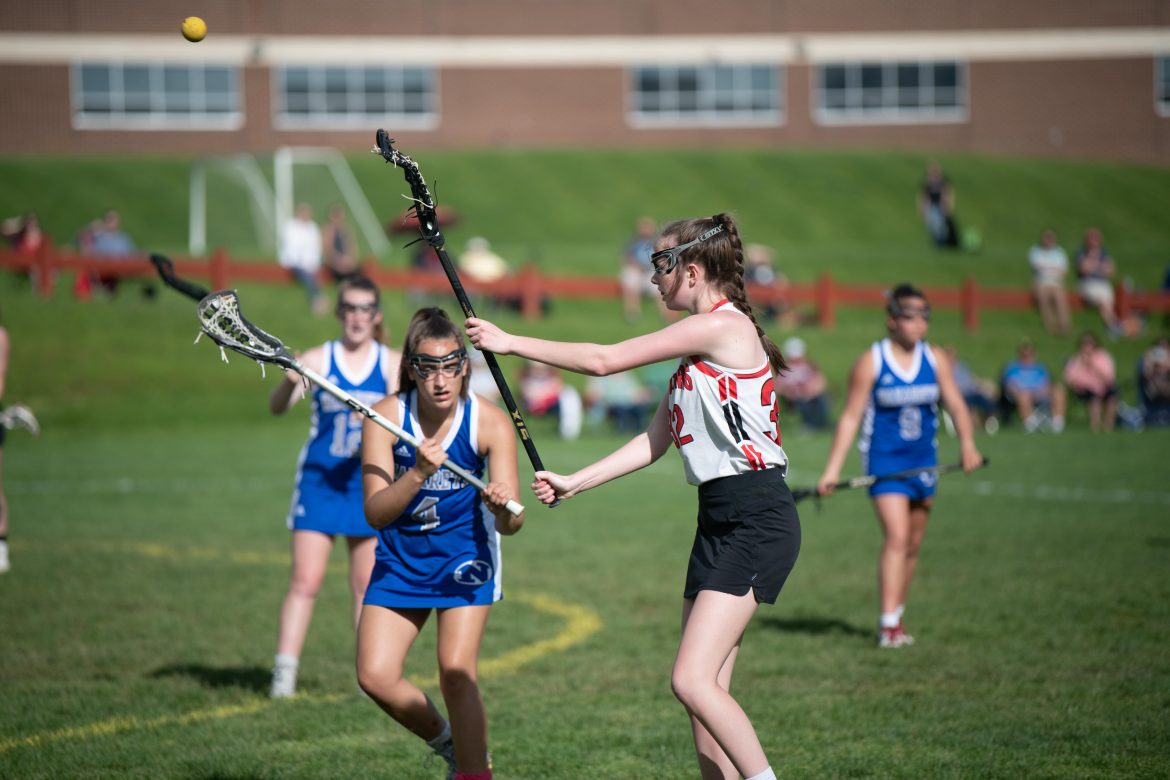 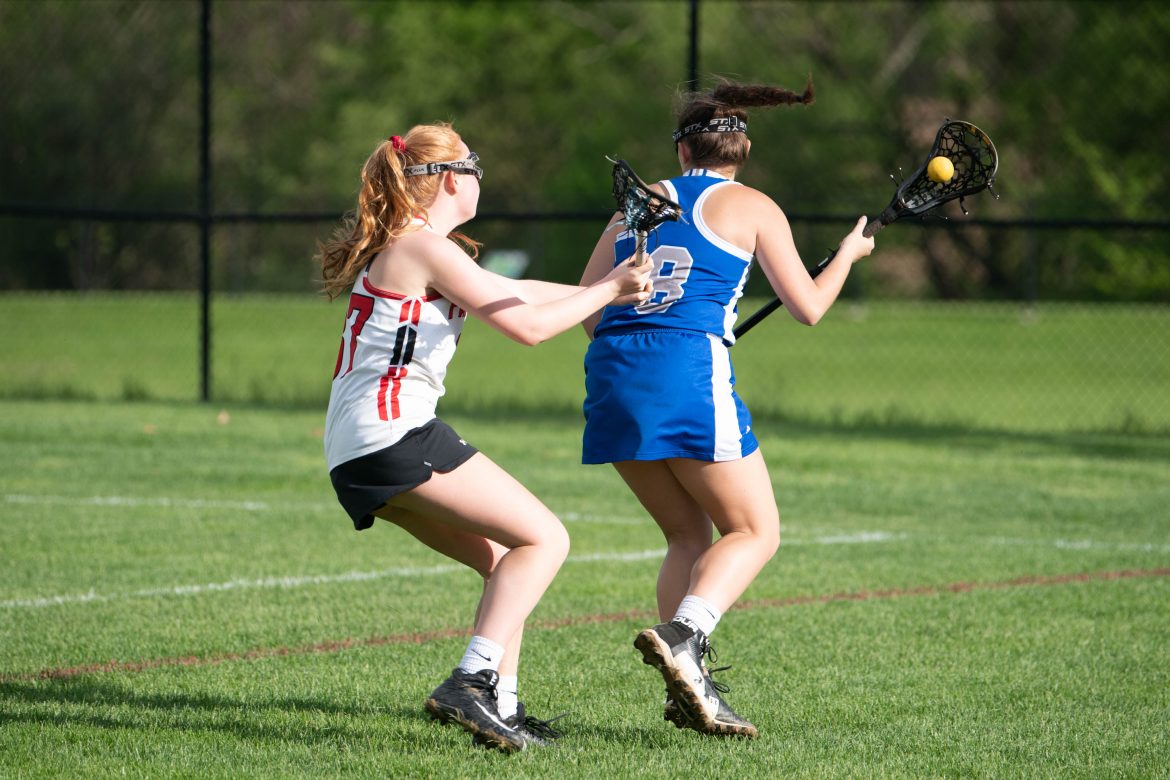 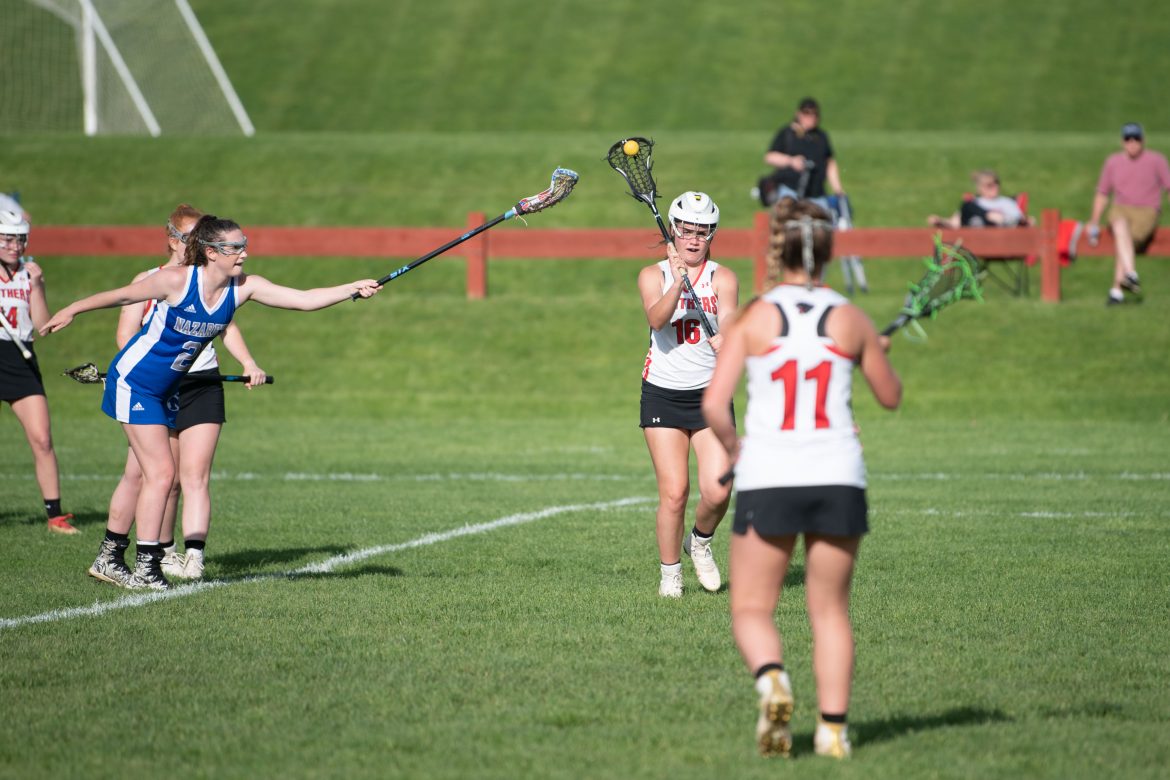 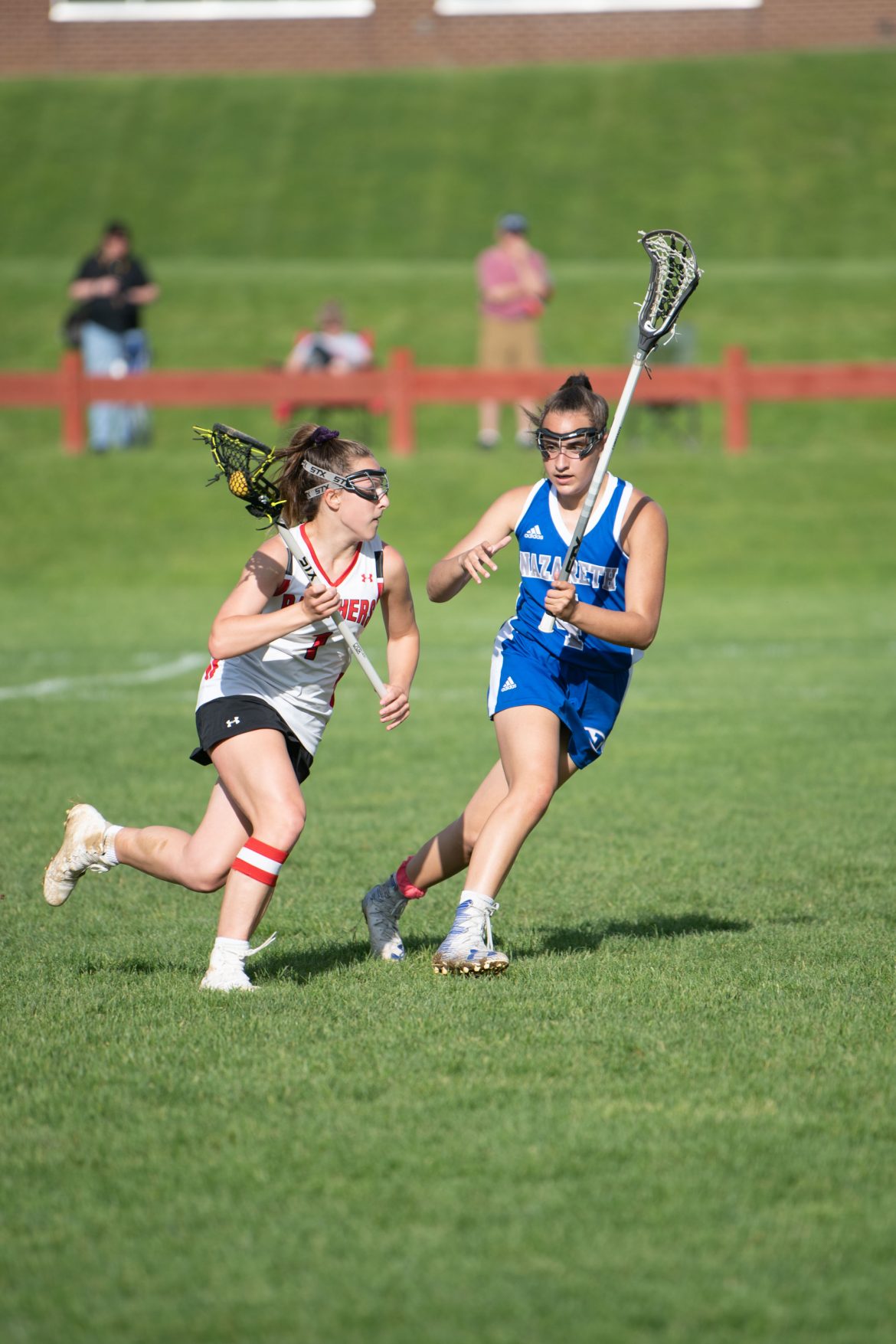 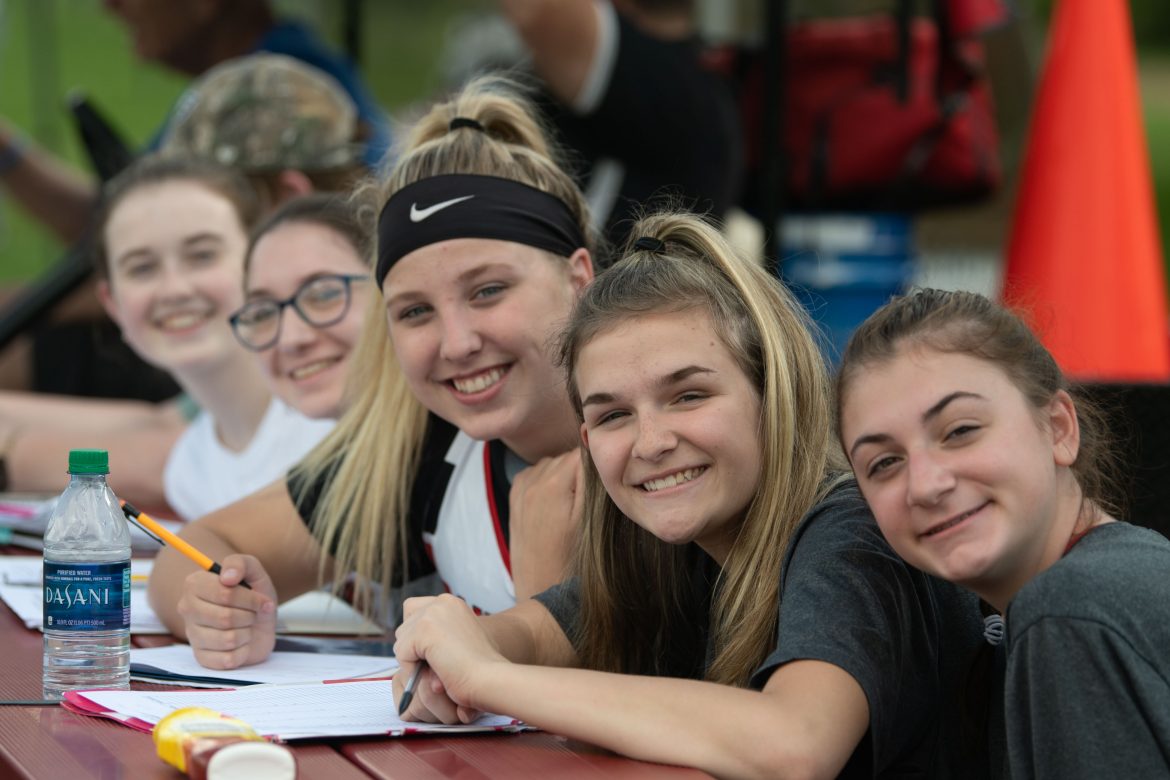 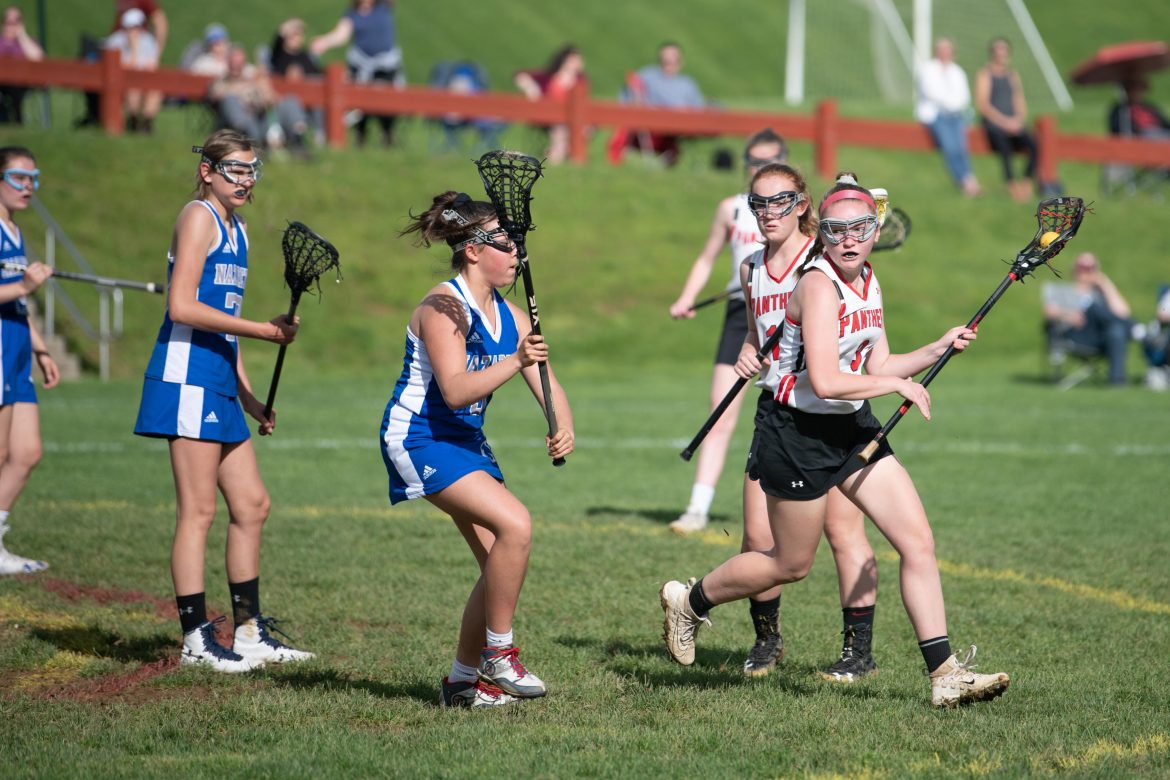 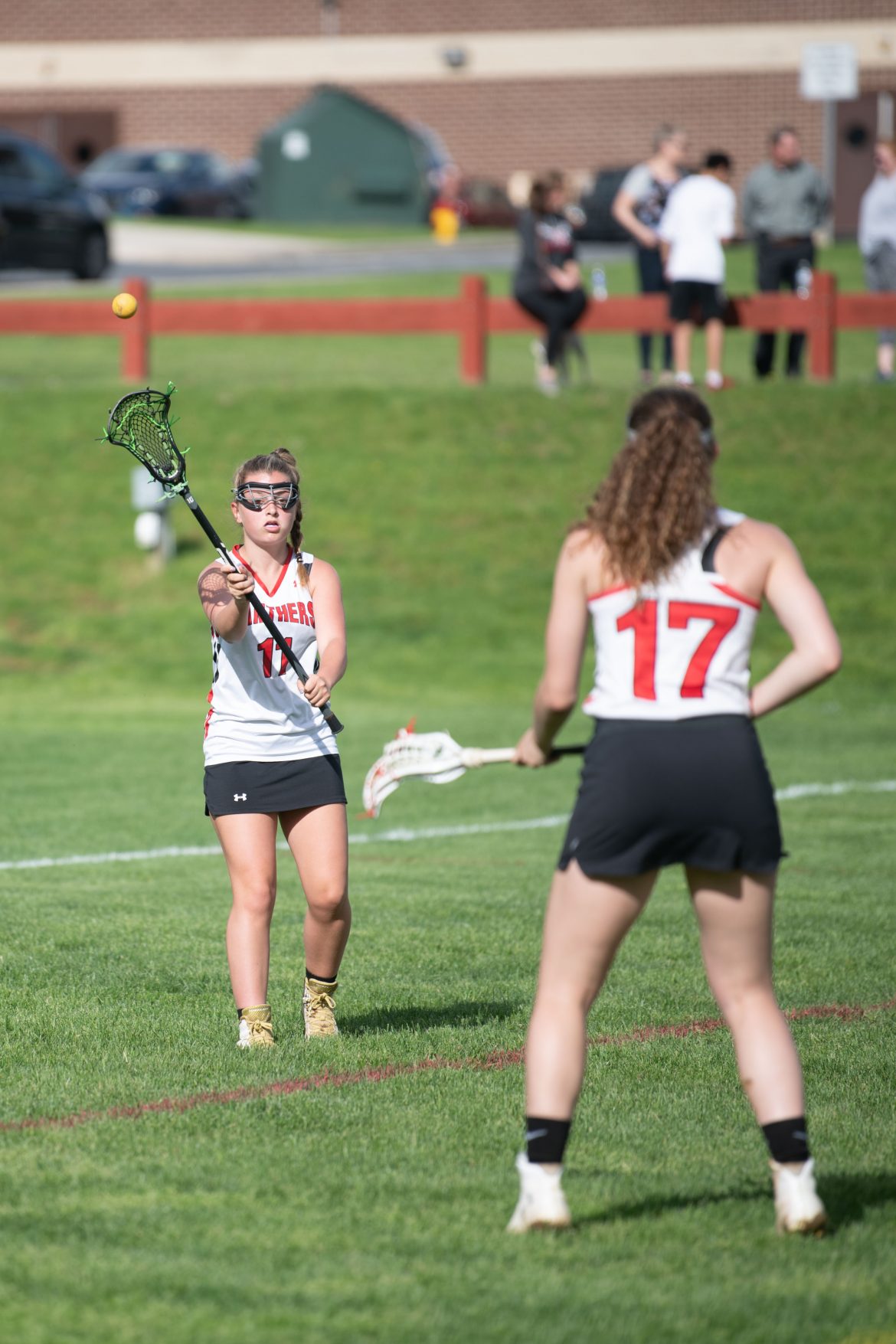 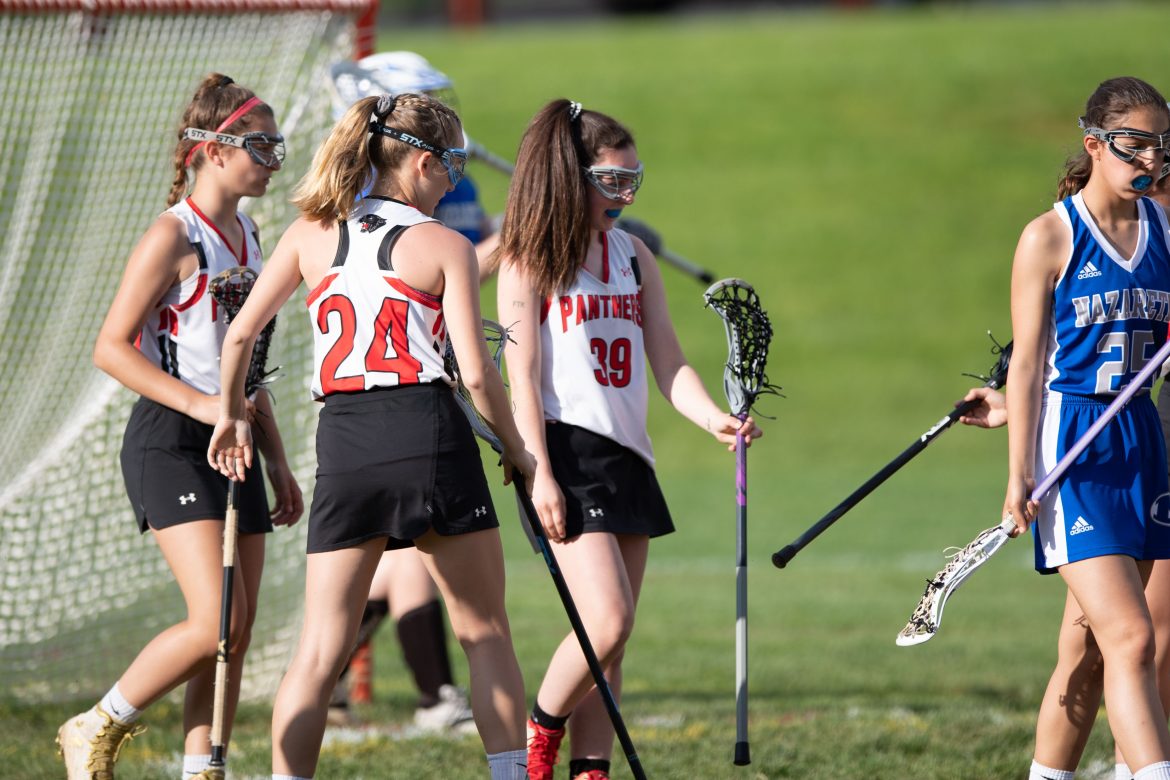 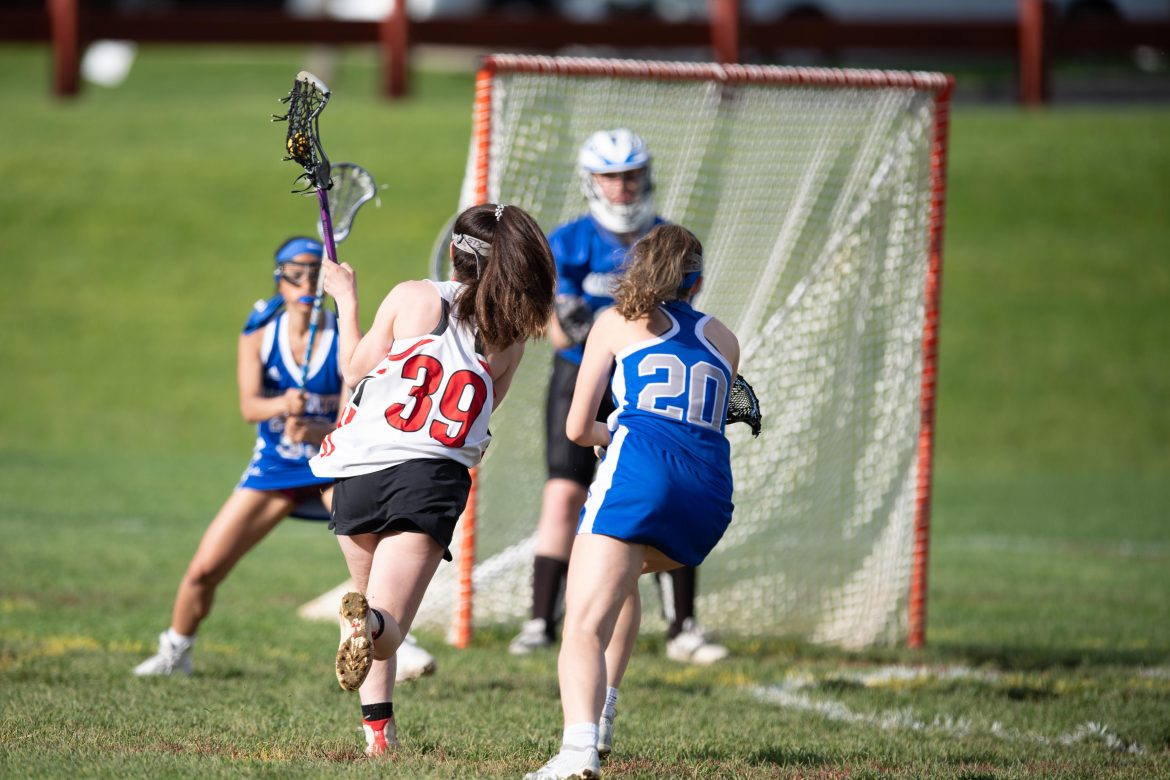 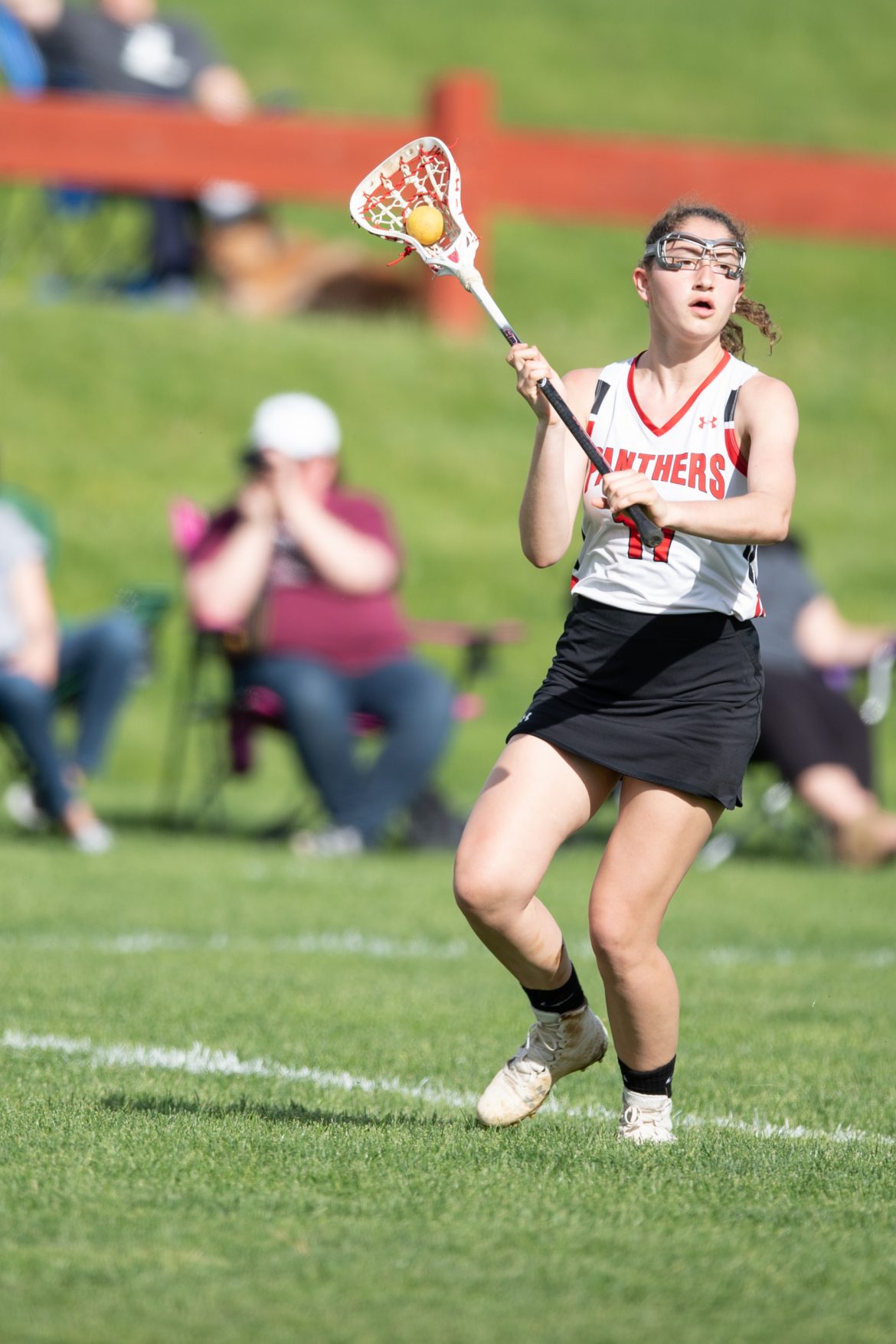 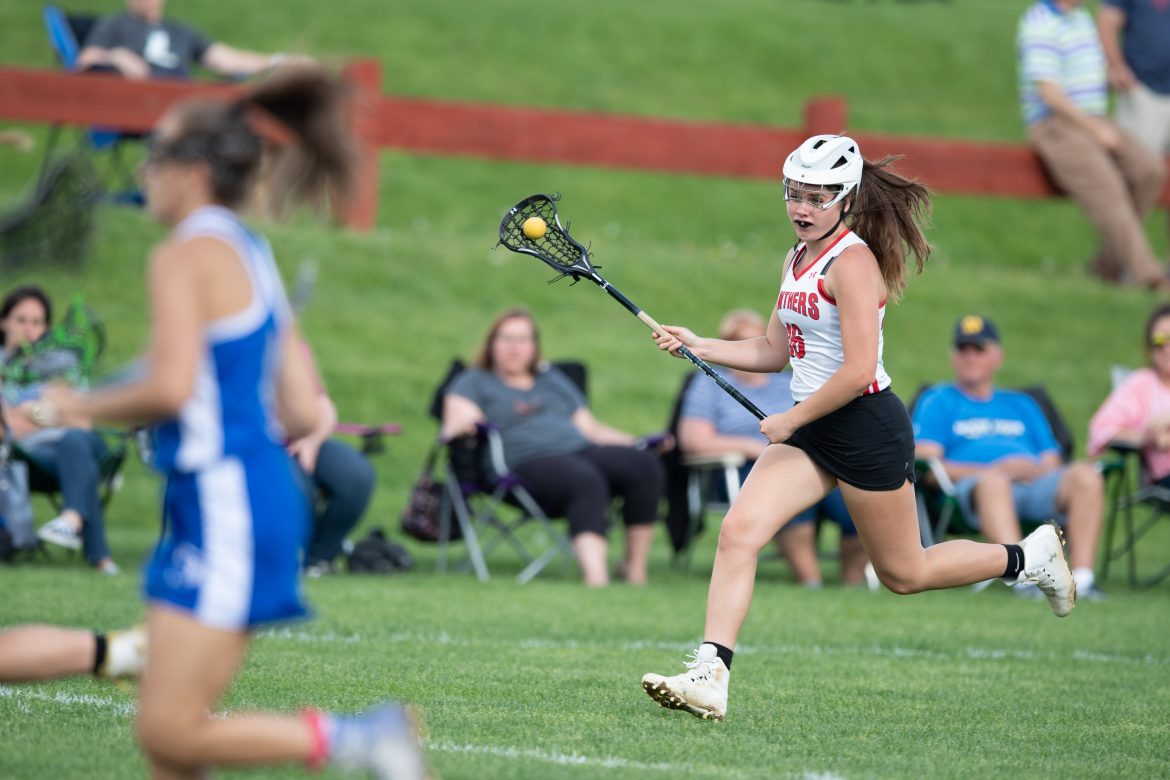 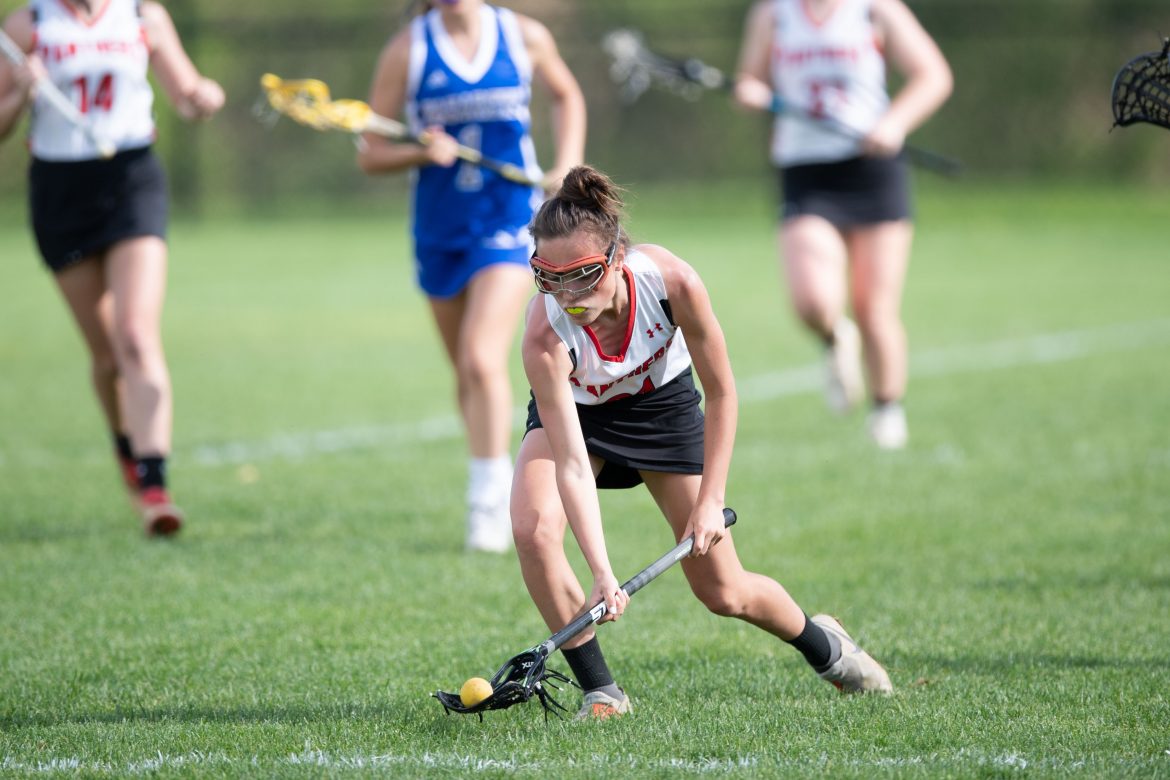 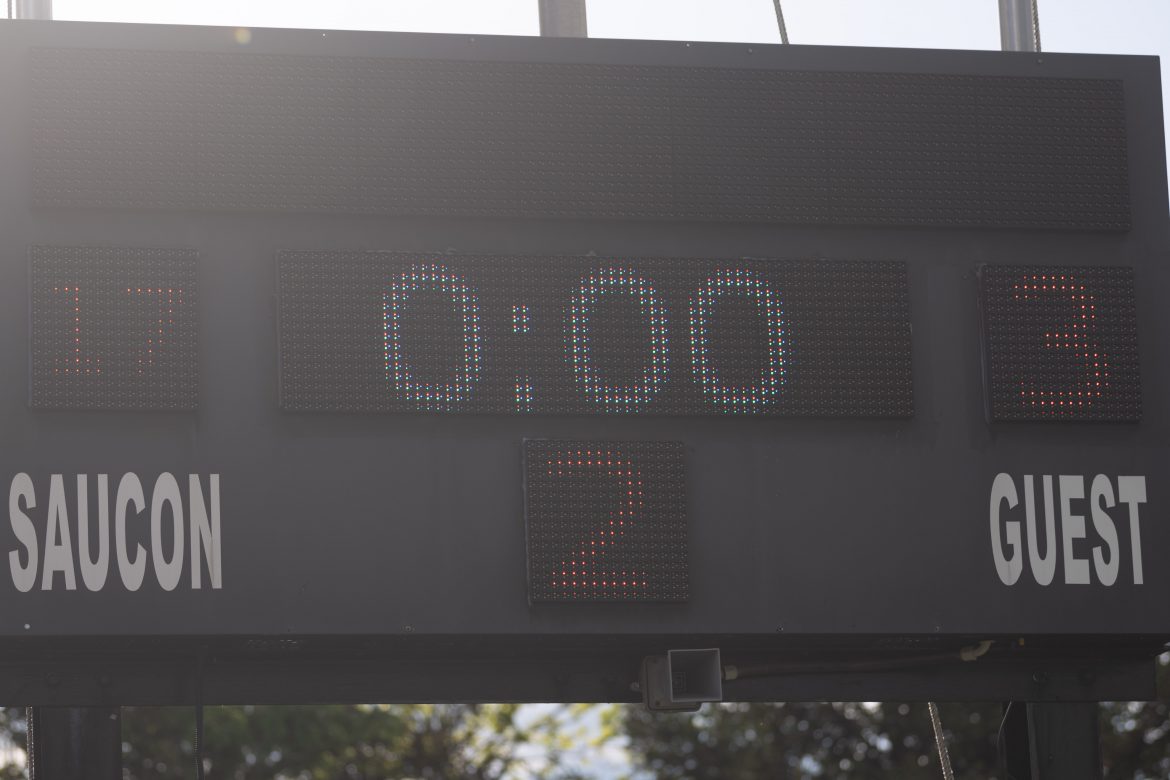