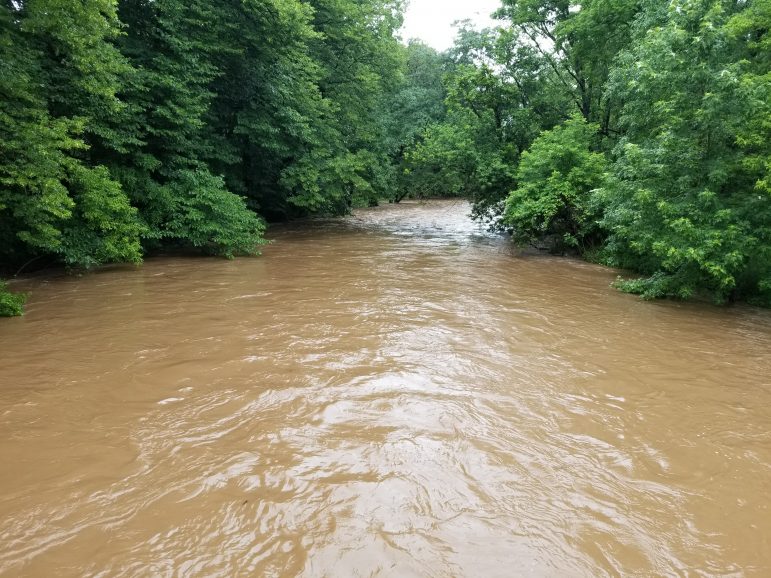 The muddy waters of the Saucon Creek were rising Tuesday afternoon after several inches of rain fell across the area. This picture was taken from the Walnut Street Bridge in Hellertown at around 4:30 p.m., as another round of rain began to fall.

If you live in a flood-prone area the National Weather Service is advising you to keep a close eye on nearby waterways due the possibility of flash flooding this evening.

The NWS has issued a flash flood warning until 8 p.m. Tuesday for southeastern Northampton County, northwest Bucks County and east central Lehigh County because on top of what has already fallen today, additional heavy rainfall is possible into tonight.

A flash flood warning means that flash flooding is imminent or is expected to begin shortly in the areas of heaviest rain within the warned area.

According to the warning statement, these areas could include Hellertown, Springtown, Pleasant Valley, Riegelsville and Bethlehem, among other locations in and around the Lehigh Valley.

“At 3:55 p.m., Doppler radar indicated heavy rain across the warned area. Up to two inches of rain fell with earlier storms,” the warning statement advised.

The National Weather Service said additional rainfall amounts of up to an inch are possible in the warned area.

Motorists are reminded to “turn around, don’t drown,” if they encounter a flooded roadway, since most flood-related deaths occur in vehicles.

The entire area is also under a flash flood watch through 6 a.m. Wednesday due to the continued threat of heavy rainfall.

“Showers and thunderstorms are expected to move through the area through this evening and into the overnight,” the watch statement said. “The stronger storms will be capable of producing torrential downpours, and the storms may have a tendency to move over the same areas.”

“Rainfall totals of 1 to 3 inches may occur in a short amount of time (which) could lead to localized flash flooding,” the National Weather Service said. “The risk of flash flooding is highest with storms that produce excessive rainfall rates for an extended period of time.”

Flooding is most likely in more urbanized and in poor-drainage locations, according to the NWS, and rapid rises of small creeks and streams are possible.