An incident in Upper Bucks County that could have ended tragically instead ended without anyone being seriously injured or killed thanks to the actions of a police officer, and the man authorities say is responsible for it is being held behind bars without bail Friday evening.

Stephen L. Deatelhauser was denied bail at his preliminary arraignment by District Judge Lisa Gaier Friday because “no condition other than imprisonment will reasonable (sic) assure the safety of the community,” online county court records indicate. 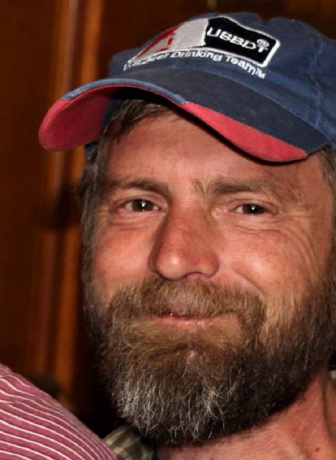 Stephen Deatelhauser of Quakertown is accused of stabbing an off-duty Lansdale borough police officer along Rt. 309 in Richland Township, Bucks County, Friday. He is pictured in a September 2017 Facebook profile picture.

Deatelhauser, 45, of Quakertown, was allegedly behaving erratically in or near stores along the heavily-traveled Rt. 309 corridor just south of the borough when Richland Township Police were summoned to assist in dealing with him at around 10:30 a.m.

When police responded to the area of Tollgate Road and Rt. 309, they said they located a man fitting Deatelhauser’s description who ran into a nearby CVS and pulled a fire alarm before displaying a knife and a kubaton–which is a type of weaponized keychain–as officers pursued him.

Richland Township Police said in a post published on their Crimewatch site that they were attempting to get Deatelhauser to drop the weapons when off-duty Lansdale Borough Police Officer Daniel Gallagher–who happened upon the scene–tackled him and was then stabbed by Deatelhauser in the left shoulder.

Gallagher, who suffered a non-life-threatening injury, was treated and released from St. Luke’s Hospital Quakertown to be with his family, according to police and media reports.

Bucks County District Attorney Matthew Weintraub hailed Gallagher as a hero at a news conference about the incident, and Lansdale Police Chief Michael Trail said of the nine-year law enforcement veteran, “I’m very proud of him,” according to Lehigh Valley Live.

“His first instincts were not for his own safety and protection, but for that of his fellow officers and for members of the public,” the news site quoted Weintraub as saying. “His heroic actions prevented potential harm to the public and, frankly, to the suspect himself. For that, we are very, very grateful.”

Following his arrest, Deatelhauser was transported to St. Luke’s Quakertown Hospital where he was treated and released, Richland Township Police said.

Following his preliminary hearing, Deatelhauser was incarcerated in the Bucks County Correctional Facility.

At the time of his arrest Friday he was free on bail in an April 2019 West Rockhill Township incident in which court records indicate he is charged with felony arson, felony risking a catastrophe and felony criminal trespassing, along with several misdemeanors.

Richland Township said in their report about Friday’s incident that “it is believed that Deatelhauser may have attempted to gain access to cars along Rt. 309 between Tollgate Road and Trumbauersville Road. At some point Deatelhauser was reported to have a backpack or smaller bag. If anyone knows the whereabouts of this bag please contact police.”

The large police response resulted in a traffic stoppage and major delays along the highway between Quakertown and Sellersville.

Deatelhauser’s preliminary hearing before Judge Gaier is scheduled to be held July 18 at 1 p.m., according to court records.