Anyone old enough to remember the 1960s Space Race–in which the United States and the Soviet Union battled each other scientifically to be the first to put a man on the moon–likely remembers where they were and what they were doing on July 20, 1969.

That was the day 600,000 million people (roughly 20 percent of the world’s population at the time) watched with nervous excitement as American astronauts Neil Armstrong and Buzz Aldrin landed their Apollo 11 lunar module on the surface of the moon.

Hours later, Armstrong would become the first person to walk on the moon and utter the famous words, “That’s one small step for man, one giant leap for mankind.”

As the nation now prepares to celebrate the 50th anniversary of the historic Apollo 11 mission, Saucon Valley residents are also remembering how life briefly stopped and how they felt as they gathered around the nearest television set to watch the moon landing.

The moon landing memories below were shared by Saucon Source readers who after five decades can still recall the sense of awe and the tremendous pride that witnessing history inspired within them.

Do you have a moon landing memory? Share it in a comment or on our Facebook page. You can also email it to josh@sauconsource.com and include a photo if you have one. 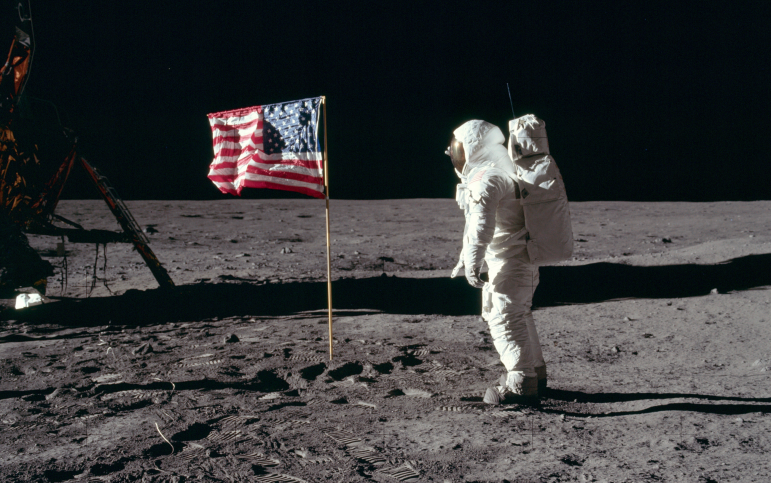 U.S. astronaut Buzz Aldrin salutes the American flag that was planted on the surface of the moon on July 21, 1969, during the historic Apollo 11 mission.

“I was 19. It was a ‘sit on the edge of your seat’ moment. We were all gathered around the TV. We were left speechless. Our eyes filled up at the emotion of it all! (I) remember Walter Cronkite had tears. … So after a few seconds of silence, everyone jumped up and yelled. We, the USA, had done it!” -Melody Smith

“My parents were traveling abroad and were in a little town in England. They paid a tuppence to rent a telly from the inn’s proprietor (he was worried because he thought the price was too high for them to afford) so they could watch the landing. So there they were, across the pond, watching when Armstrong set foot on the moon. And when they got to London, everyone they met—upon learning they were Americans—congratulated them on the success of the mission. Dad said it was really neat.” -Jodi Ireland

“The moon landing I watched with my then fiancée and our boss, his wife and their three little kids up in Coplay, Pa., on Fifth Street. For certain, it was a real goose bump moment in time!” -RM Mazza

“I was serving in the army at Aberdeen Proving Ground, Maryland. I was a military policeman with the 523rd MP Company. I don’t remember if I had the day off or was working third shift. There were probably 20 or 30 MPs in the dayroom watching the event. When the capsule touched down we all went crazy. I was so proud to be an American that day, witness to an incredible event. Man hadn’t been flying for 70 years and then we landed on the moon. Amazing.” -Larry Deibert

“I was not quite 5 years old. My parents took us to our neighbor’s house because they had TV and we did not. All the adults watched on TV and all us kids were out in the back yard watching the moon and thinking we’d be able to see it. One of my favorite memories…yelling and waving at the moon.” -Rhonda Murphy Wargo

“I was at a christening party for a friend’s new baby. It was a hot day in Bethlehem. We all gathered in their living room (no air conditioning) around the console TV to watch the epic event. It’s one of those moments in time that you’ll always remember where you were.” -Kathy Davis