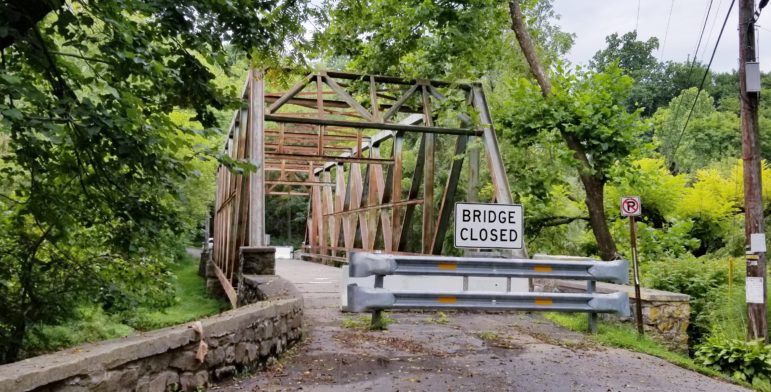 The Seidersville Road Bridge is located within Bethlehem city limits and is owned by Northampton County. It has been closed to traffic since 2011, and the county has no plans to repair or replace it.

To some people it’s known as the “metal bridge.” To others it is the “High Street Bridge,” which is actually a misnomer, since a newer bridge directly to its east is named that.

Technically speaking its name is the Seidersville Road Bridge, but regardless of what you call it, the fact remains that it’s not seen any traffic move across it in nearly eight years.

That should change, some local residents are saying, especially now that the Water Street Bridge which spans the Saucon Creek less than a mile south of the Seidersville Road crossing is closed for a two-month replacement project.

About a mile further south of Water Street, the historic Meadows Road Bridge in Lower Saucon Township has been closed for 15 months due to structural issues and also continues to be the subject of questions by local residents who miss being able to use it to travel back and forth to Rt. 412.

Northampton County owns both the Meadows and Seidersville Road bridges, but officials only plan to repair or replace the Meadows bridge, which is the older of the two spans.

The stone arch, single-lane Meadows Road Bridge, which was built in 1858, was recently declared eligible for placement on the National Register of Historic Places, and township officials have said they want it to be rehabilitated.

County officials haven’t said whether they will pursue a course of restoration or replacement, however they have in the past said that there isn’t funding to repair or replace the other Saucon Valley bridge they own, the Seidersville Road Bridge, which is also considered a historic span by some bridge preservationists.

Located within Bethlehem city limits, during the 75 years it was open the Seidersville Road Bridge was likely used by as many Saucon Valley residents as Bethlehemites owing to its convenient location between Hellertown borough–just to the east–and parts of Lower Saucon Township to the west.

In November 2012, then-county bridge superintendent Tom Kohler told the Morning Call that reopening the Seidersville Road Bridge would cost an estimated $7 to $8 million.

The newspaper reported at the time that although it had appeared on a list of projects eligible for state funding, the bridge had been removed due to chronic funding shortfalls.

So tell us what you think about the cost of the project–which would likely be considerably higher today–and whether restoring that access point is worth it.

Vote in the poll and have your say about whether or not the Seidersville Road Bridge should be repaired or replaced.

Should the Seidersville Road Bridge Be Repaired or Replaced?