Cancer researchers at St. Luke’s University Health Network were impressed by the results: After injecting a patient’s cancerous tumors with an experimental medicine derived from a fuchsia-colored liquid from India, called Rose Bengal, the tumors simply shriveled up and flaked off. 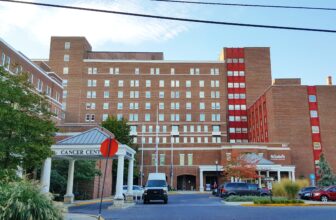 In the Bengali region of India, Rose Bengal has long been used as an ingredient in the stain used in the forehead dot designating the marital status of women. Now researchers on this side of the planet are looking into its potential cancer-killing properties.

Dr. Gary Lu, an oncologist at St. Luke’s, is a principal investigator for a Provectus Biopharmaceuticals study in which Bethlehem resident, James McCandless, enrolled last year.

The fair-skinned 81-year-old McCandless has a troubling history with skin cancer and is being treated currently for stage 4 metastatic melanoma on his liver with the FDA-approved drug Keytruda. Skin cancer is responsible for more than 7,000 deaths each year in the U.S., according to the American Cancer Society.

After cancerous moles were found on his scalp, McCandless had three injections of the Rose Bengal derivative, also known as PV-10, over several months. Shortly after each injection, the moles shrank, dried out and flaked off, leaving slight scars in their place.

“They worked wonders,” says Violet, his wife, of the shots.

St. Luke’s reported on the PV-10 research at the American Society of Clinical Oncology’s annual meeting in Chicago in early June. The results were described as promising, causing few side effects.

McCandless agrees and adds that the Keytruda infusions he receives at the SLUHN Cancer Center have reduced his liver tumors to mere “spots.”

Though slightly fatigued by the treatments, and having lost some 20 pounds, he still visits his rural vacation home weekly and enjoys his morning walks or lifts weights daily, taking the inconveniences all in stride.