Luis Devia of Hellertown was welcomed to Geisinger Commonwealth School of Medicine’s (GCSOM) Class of 2023 during the school’s 11th annual White Coat Ceremony held Aug. 2 in Scranton, it was recently announced in a news release.

Devia and nine other new doctors-in-training have also committed to staying in the region to practice medicine by becoming part of the school’s Abigail Geisinger Scholars Program. 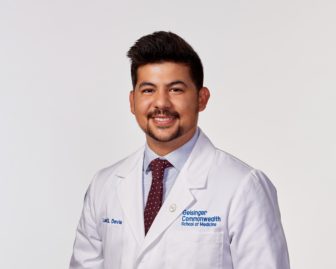 As part of the program, Abigail Geisinger Scholars pay no tuition in exchange for an obligation to work at Geisinger once they finish their residencies.

“These students are obviously brilliant, but more importantly, they are devoted to our region and have promised to care for this community in the future,” said Steven J. Scheinman, M.D., GCSOM president and dean. “Because of their commitment, they will have no medical school tuition debt. We can think of no better way to bolster the pipeline of high-quality physicians serving our communities.”

“Medical school debt is a big problem,” added Jaewon Ryu, M.D., Geisinger president and CEO. “Part of making health easier for our communities is to make it easier for future physicians to serve those communities. One way we can do that is by easing the financial challenges of medical education and encouraging students to commit to serving our communities in return for the investment we make in their education.”

During the white coat ceremony, which is held annually to welcome new medical students into the profession, students recited an oath acknowledging their responsibilities as future physicians and their obligations to future patients. They then were cloaked with the white coat–a symbol of the medical profession.

At the ceremony Scheinman reminded the students that despite the pace of change and the wonders of new technology, “what needs to remain constant through, or even despite, all of this is your relationship with the patient. Many things in our brave new world of modern medicine conspire to separate you from them…this is where oaths come in.”

Scheinman urged the class to return to their oath throughout their studies and careers in order to keep “your relationship with the patient central to your identity as a physician.”

Born in Colombia, Devia moved to the United States as a child and graduated from Saucon Valley High School in 2010.

A talented soccer player, he was a standout for the Panthers and went on to play at Elizabethtown College, as well as for the national champion FC Sonic team based in Allentown. He has also coached youth soccer for Lehigh Valley United.

Devia was admitted to the Abigail Geisinger Scholars program via a competitive application process. Criteria include demonstrated financial need, academic merit, diversity and predictors of whether the applicant is likely to stay in the region Geisinger serves, according to the news release.

Geisinger Commonwealth School of Medicine is a member of the Geisinger family of health care-related institutions, which includes campuses in Danville, Doylestown, Scranton, Sayre and Wilkes-Barre.