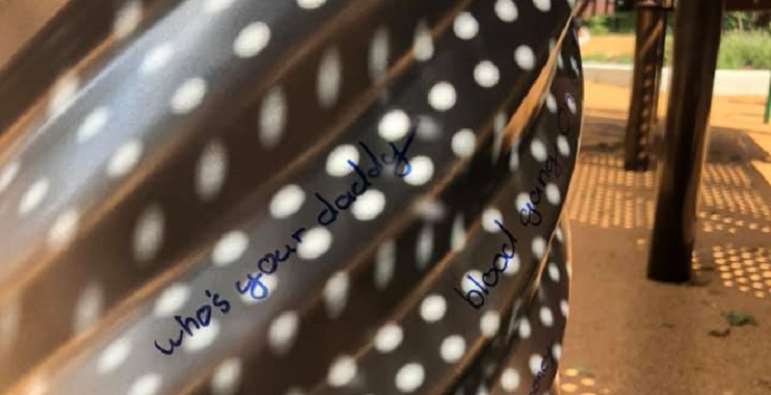 Hellertown Police are investigating criminal mischief at the new playground in Dimmick Park, after several vulgar messages were discovered written on a piece of equipment there Sunday.

Who could be callous enough to write obscene phrases on brand new playground equipment in Hellertown’s Dimmick Park?

That’s a question many people in the borough are asking themselves after vandalism was discovered in the playground Sunday, and police are asking it, too.

Hellertown Police have opened a criminal mischief investigation in an effort to identify the perpetrator or perpetrators, who wrote messages like “Little kids suck” and “Who’s your daddy” in permanent marker on the equipment.

The graffiti was brought to light in a public Facebook post by Briana Rich that was shared in the Hellertown, Pennsylvania Facebook group Sunday. Authorities were alerted as a result.

The post has so far generated numerous comments expressing outrage over the vandalism, particularly in light of the fact that the $500,000 state-of-the-art playground opened just six weeks ago.

Several people suggested that meaningless destructive behaviors such as the one documented in this case are a reason why “we can’t have nice things,” and a comment suggesting that video surveillance be installed at the playground was well-received.

Hellertown Police are asking that anyone with information about the incident call them at 610-838-7040 and reference Incident #194124.

Below is the original Facebook post that includes photos of the graffiti. Please note that the messages contain profanity and vulgar suggestions. Reader discretion is advised.