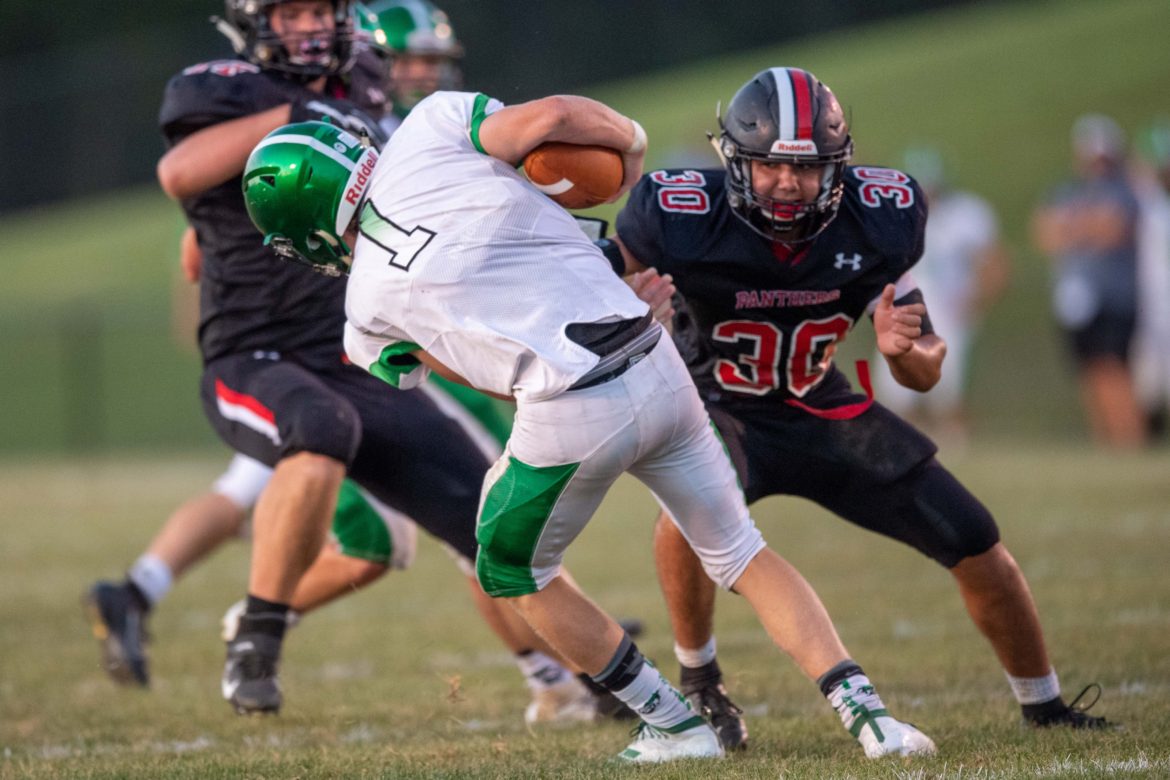 The Panther defense was stout in their contest against the Pen Argyl Green Knights.

The Saucon Valley Panthers defended their home turf against the Pen Argyl Green Knights in a Friday night football tilt. Both the Panthers and the Knights took the field winless. Last week, Saucon fell to the Southern Lehigh Spartans while Pen Argyl came up short to the Salisbury Falcons. It was an absolutely beautiful night for football and a beautiful night for one of these teams to pick up their first win of the 2019 season.

The first 15 minutes or so of the game unrolled as a ‘Punt-Fest’ when both offenses were unable to get any scoring traction. The two teams combined for five punts during the early stages of the game. The Panthers’ offense sputtered with a little bit more consistency, but they could not sustain a scoring drive. Saucon moved the sticks, but were unable to punch in for points during their third possession. The Panthers ended up turning the ball over on downs in the red zone at the Green Knight 16-yardline. Fittingly, the first score of the game ended up being generated by defense, the Panther defense. 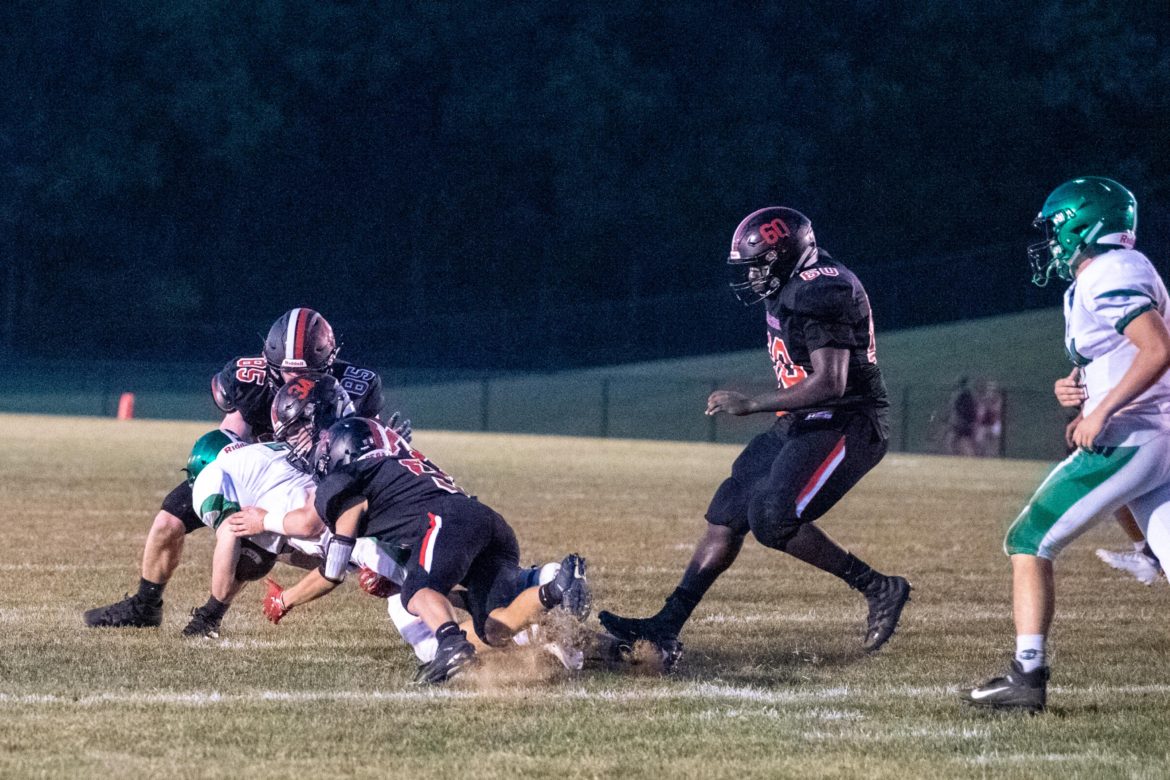 Tyler Pfizenmayer (#34), Aiden Renninger (#5), Dale Sorensen (#85), David Osman (#60) and the rest of the Panther defense made it a difficult night for the Knights.

A swarming and suffocating Panther defense punched Pen Argyl backward into a 3rd & 18 situation from the Green Knight 8-yardline. Rolling to his right Pen Argyl quarterback Gavin Amerman dropped back to pass but quickly found the Panthers’ Ramel Moore and Josh Torres coming off the edge and in his face. Amerman reversed field and scrambled back to his left only to find Saucon’s Aiden Renninger screaming toward him from the back side. Renninger wrapped Amerman up in the end zone, but could not bring him down. With Moore and Torres about to pounce, Amerman unloaded the ball to avoid a sack in the end zone. However, because the ball landed with no receiver in the vicinity an “intentional-grounding” penalty was called. By rule, this penalty amounts to a two-point “safety” when it occurs in the end zone. With 7:34 remaining in the first half, the Saucon Valley defense earned a 2-0 lead.

Following a couple more punts, Saucon regained favorable possession at their own 43-yardline. After grinding out a couple of first downs, the Panthers went to the air on 1st & 10 from the Green Knight 32-yardline.

With under two minutes remaining, Saucon Valley sophomore quarterback Dante Mahaffey rolled to his right and connected with wide-open sophomore receiver E.T. Aris for a 32-yard touchdown on a corner route score. The Panthers decided to go for a two-point PAT and were successful when Mahaffey pitched to sophomore running back Damian Garcia on an option play. Saucon Valley closed out the first half scoring and took a 10-0 lead into the locker room. 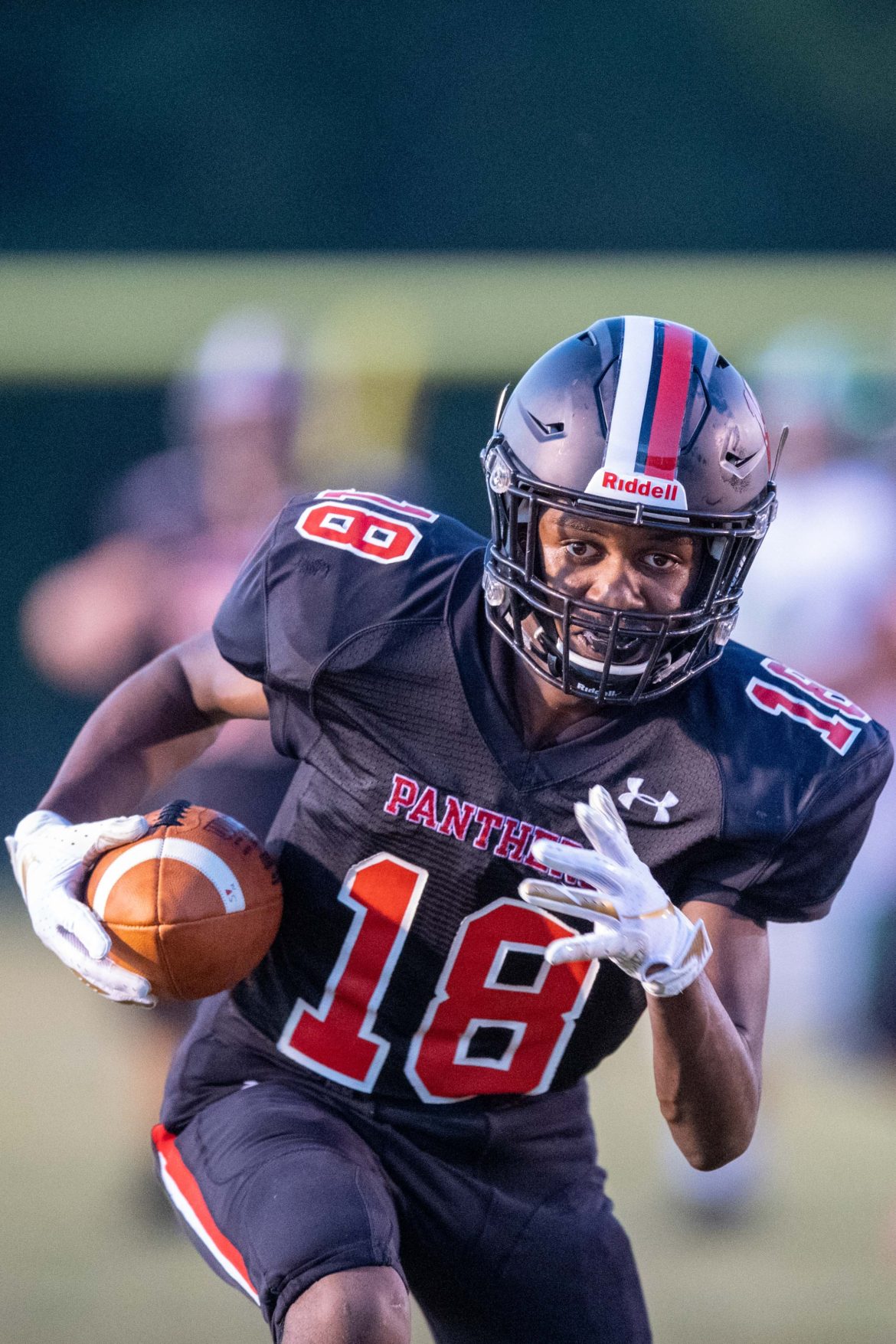 The Panthers came out of halftime optimistic and looking forward to building upon their lead. However, Saucon mishandled the opening, second-half kickoff, gifting possession to Pen Argyl at the 23-yardline. Seven plays later the Knights pounded the ball across the goal line for a touchdown. The point-after was good and only four minutes into the third quarter, Pen Argyl seized momentum with a 10-7 score.

Any momentum fizzled when the two teams traded possessions, but Saucon eventually started with the ball at their own 14-yardline. After a run for no-gain, sophomore Damian Garcia broke loose and took a counter play 86 yards for a touchdown. Garcia was uncorked by blocks from teammates Aiden Renninger, David Osman and Nick Warnke. Saucon’s attempt for another two-point PAT was unsuccessful. Garcia’s race to the endzone allowed the Panthers to take a 16-7 lead into the fourth quarter. 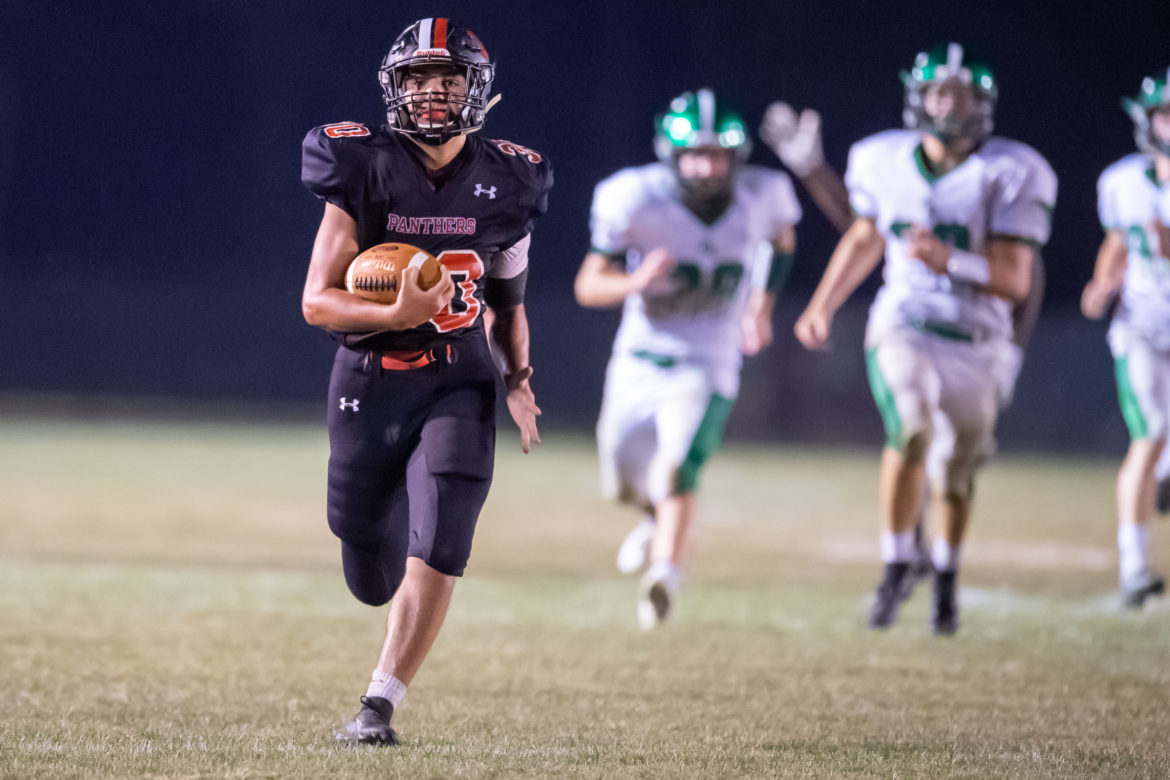 Damian Garcia (#30) races for his first score as the Green Knights pursue.

Saucon Valley’s defense stepped up and forced another Pen Argyl punt. The Panthers were pretty much lights-out defense against the Knights. Throughout the entire game Saucon only surrendered 74 total yards to the Pen Argyl offense. In addition, the Green Knights were unable to complete a single pass. 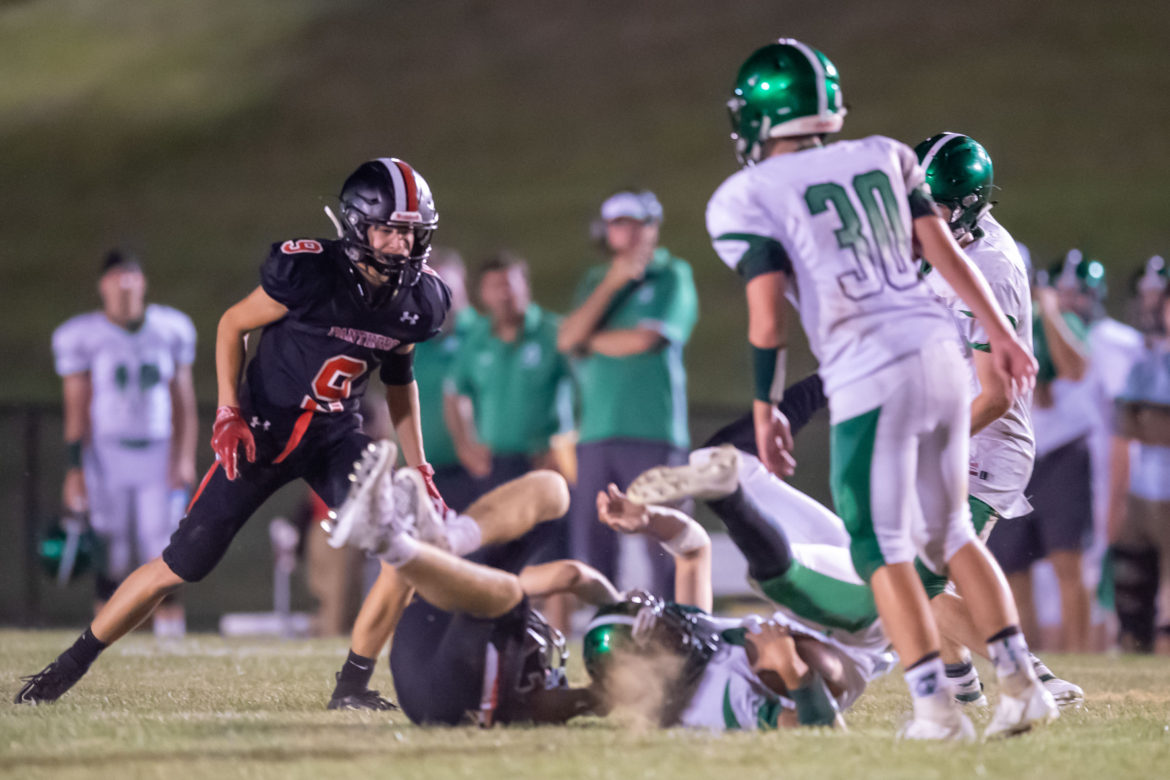 Three yards and a cloud of dust as sophomore Anthony Orlemann (#9) looks on after his Panther pal tackles the Green Knight ball carrier.

For good measure Saucon Valley added another score with Damian Garcia’s encore. This time Garcia broke free for a 57-yard touchdown run. Garcia’s second score and two-point conversion (run by Garcia) locked down the win. It was a 24-7 victory for the Panthers. 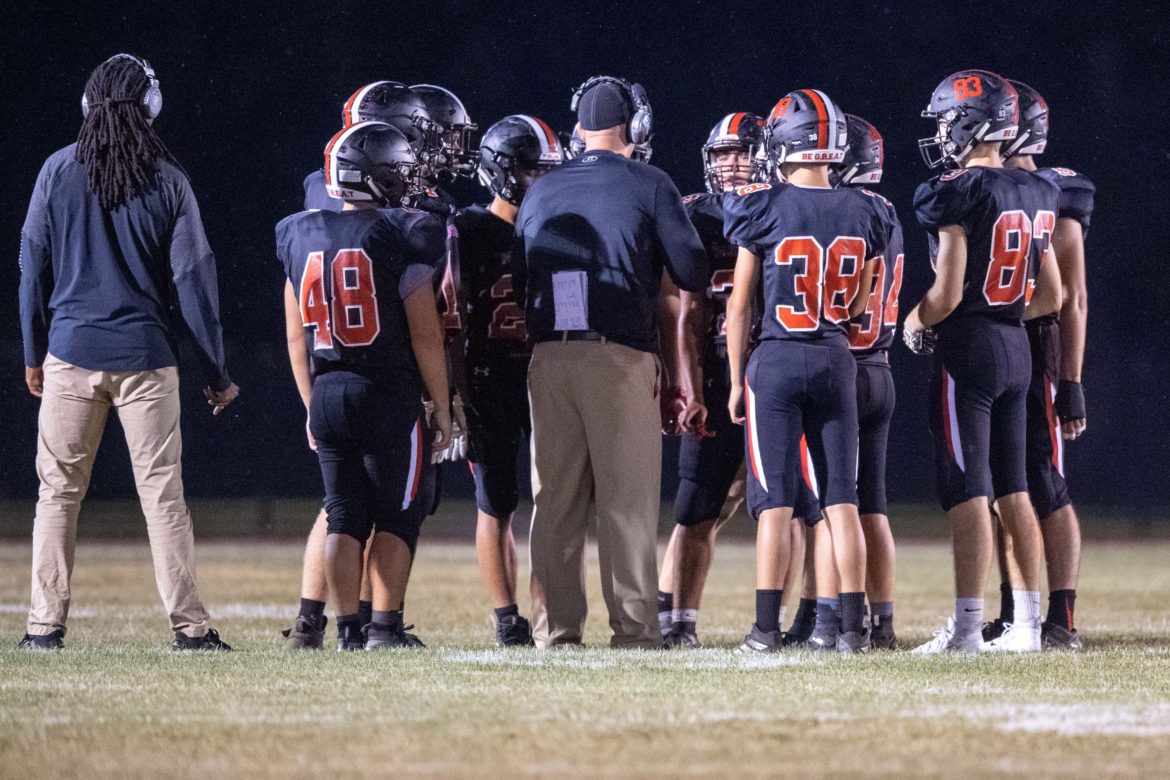 Up Next: Saucon Valley (1-1) will travel to Palmerton (1-1) for a road trip rendezvous with the Blue Bombers. Palmerton defeated Palisades 47-6 during Week 1, but lost this past Friday to Southern Lehigh 27-12. It should be a very competitive clash. Kickoff is scheduled for 7 p.m. 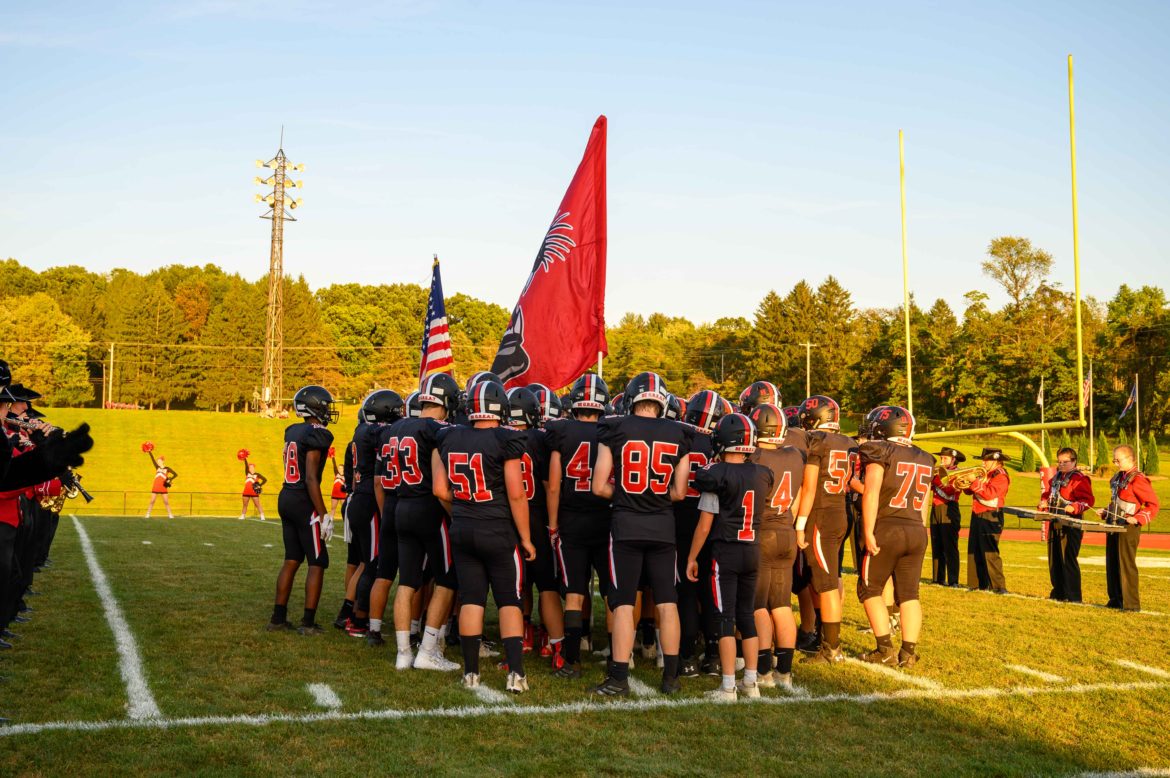 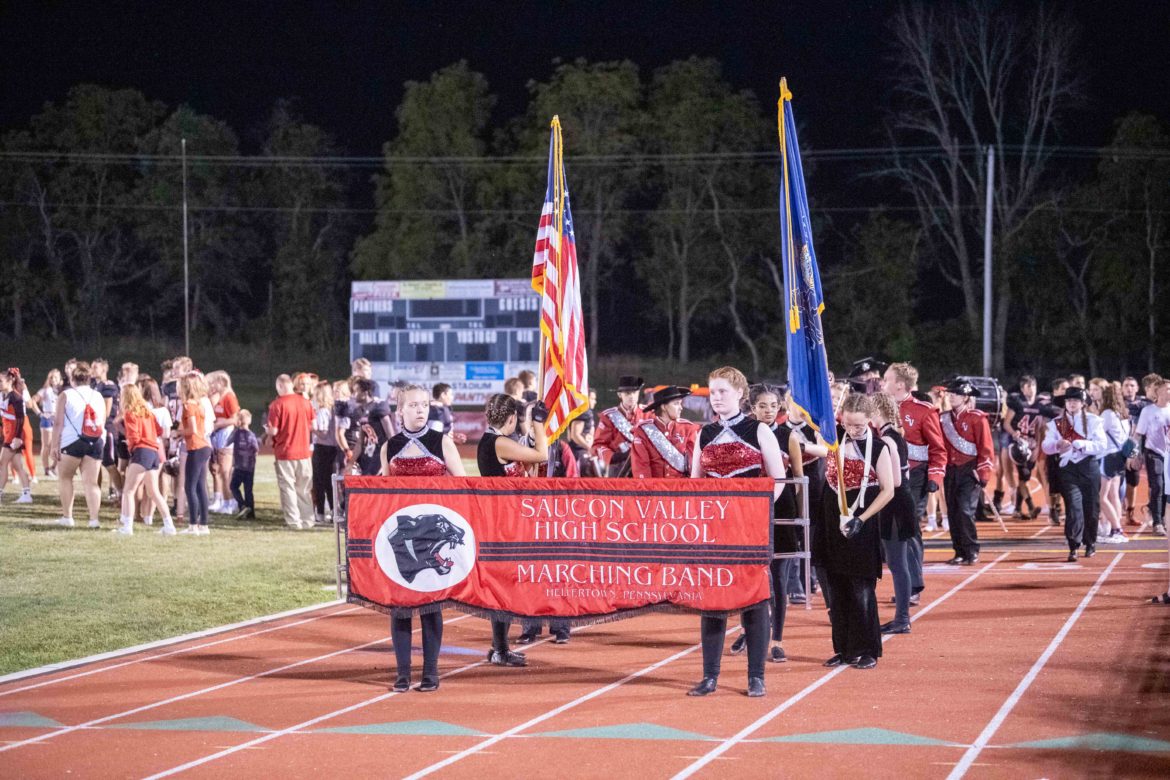 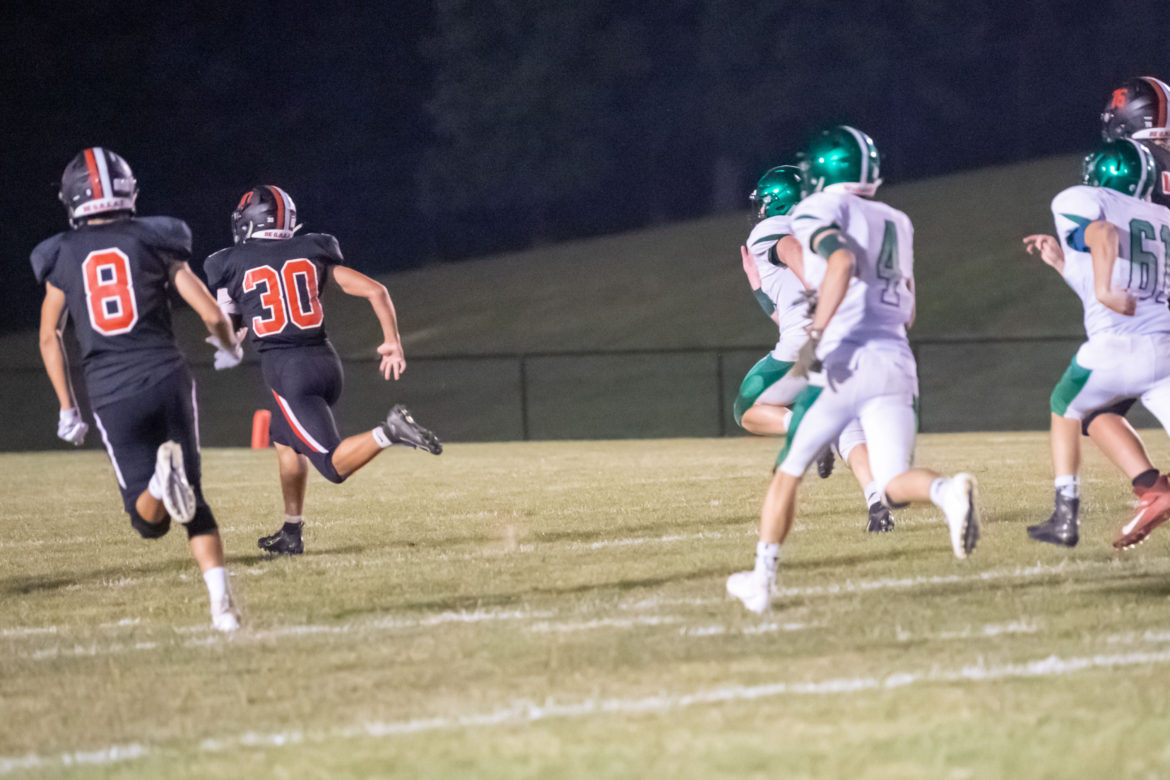 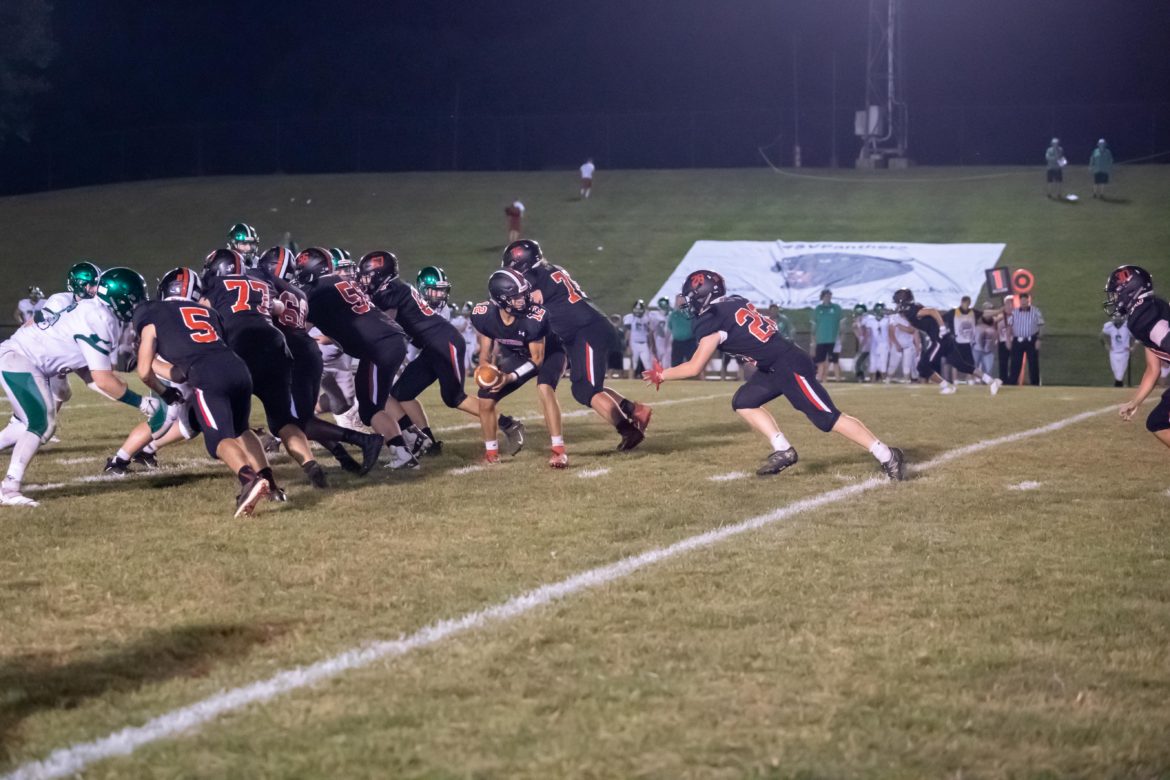 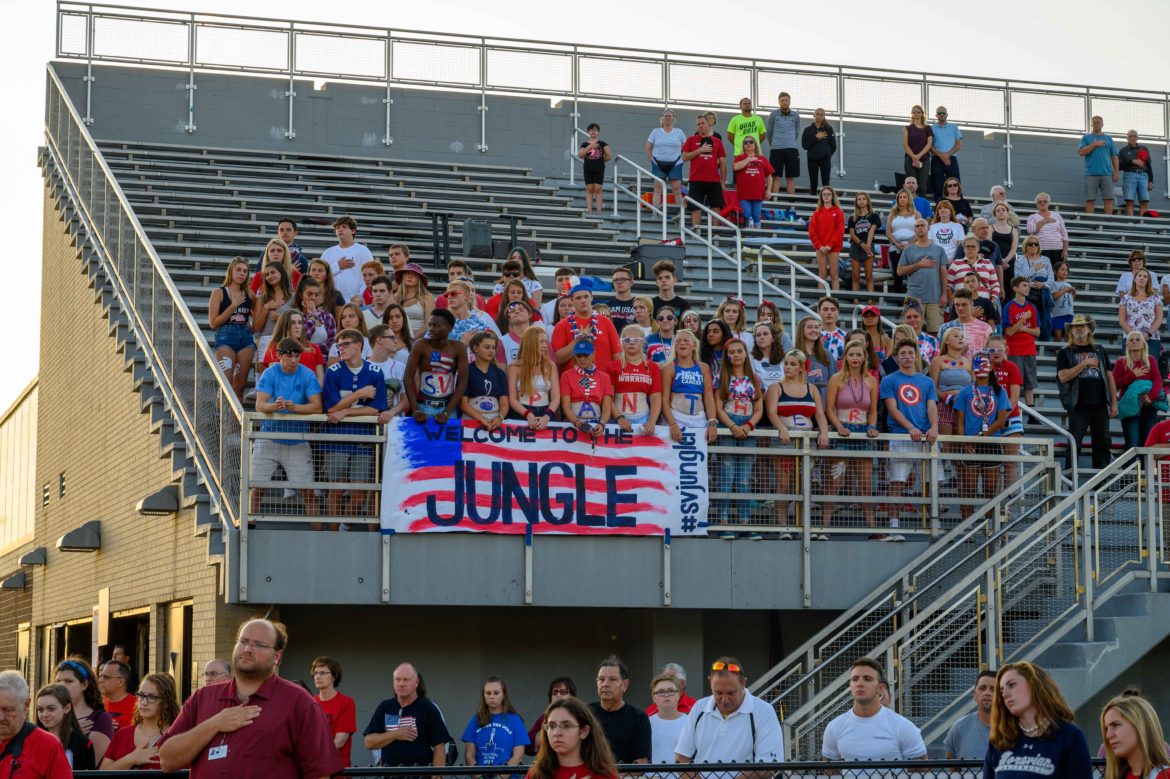 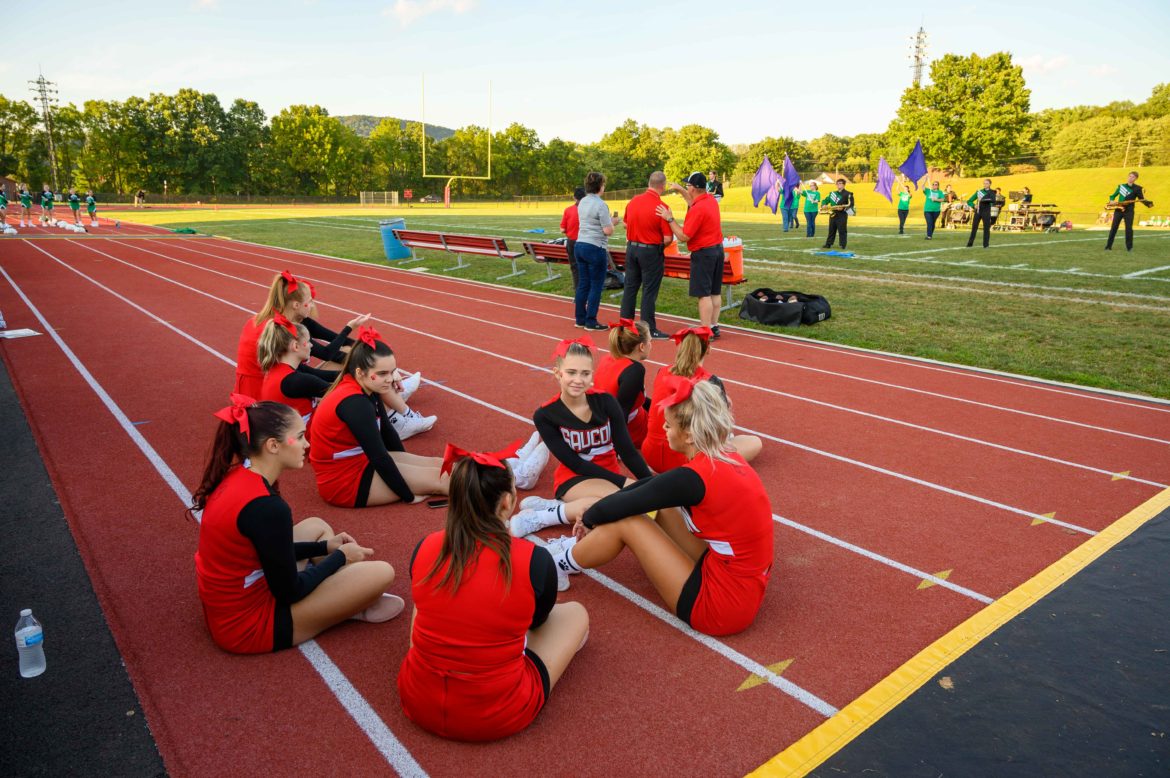 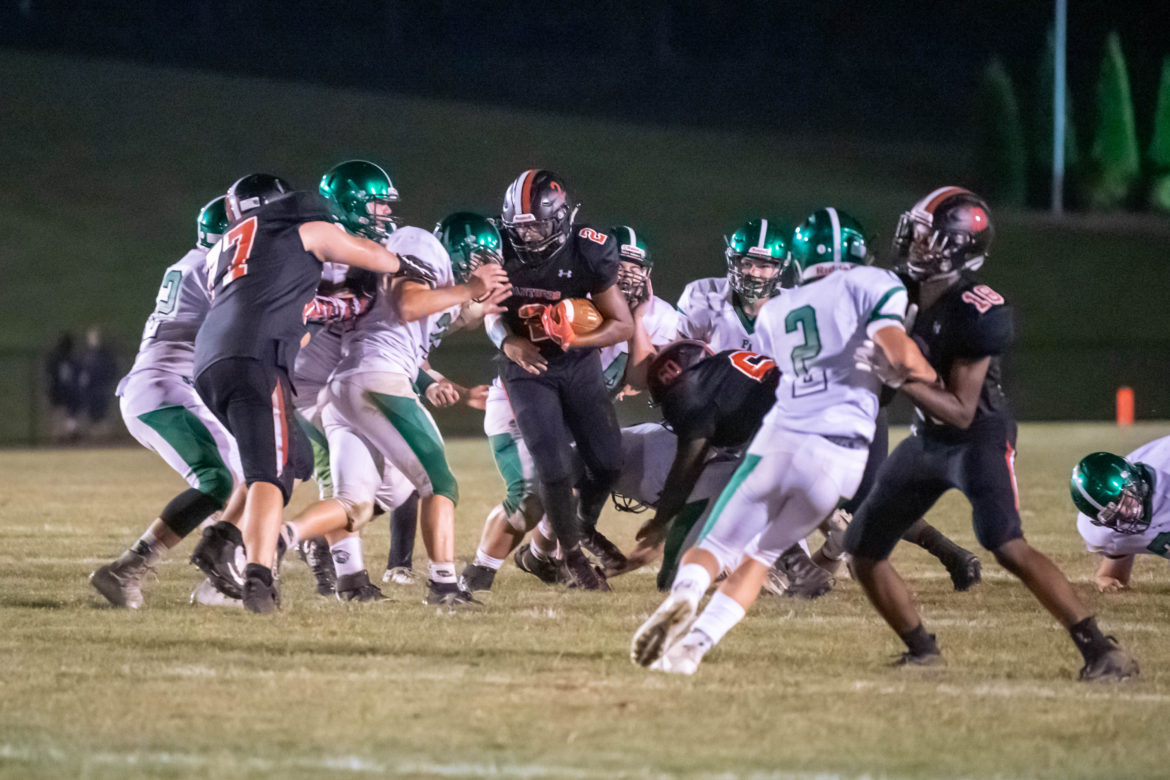 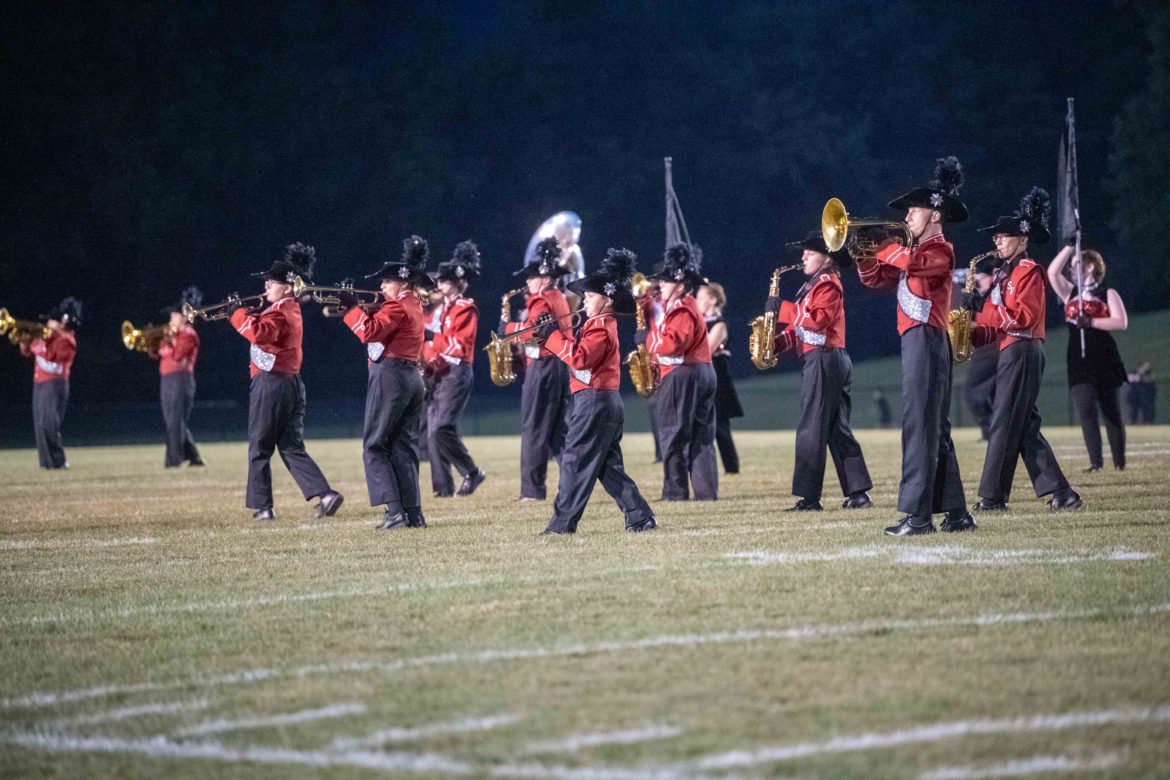 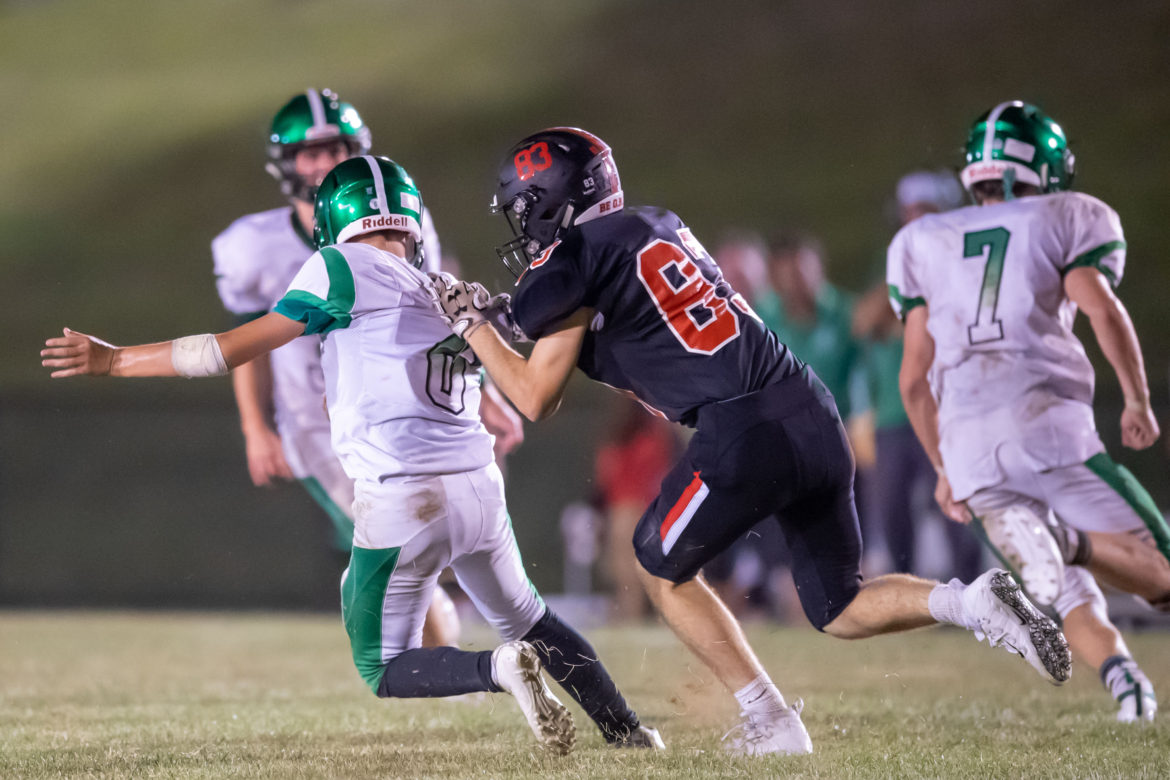 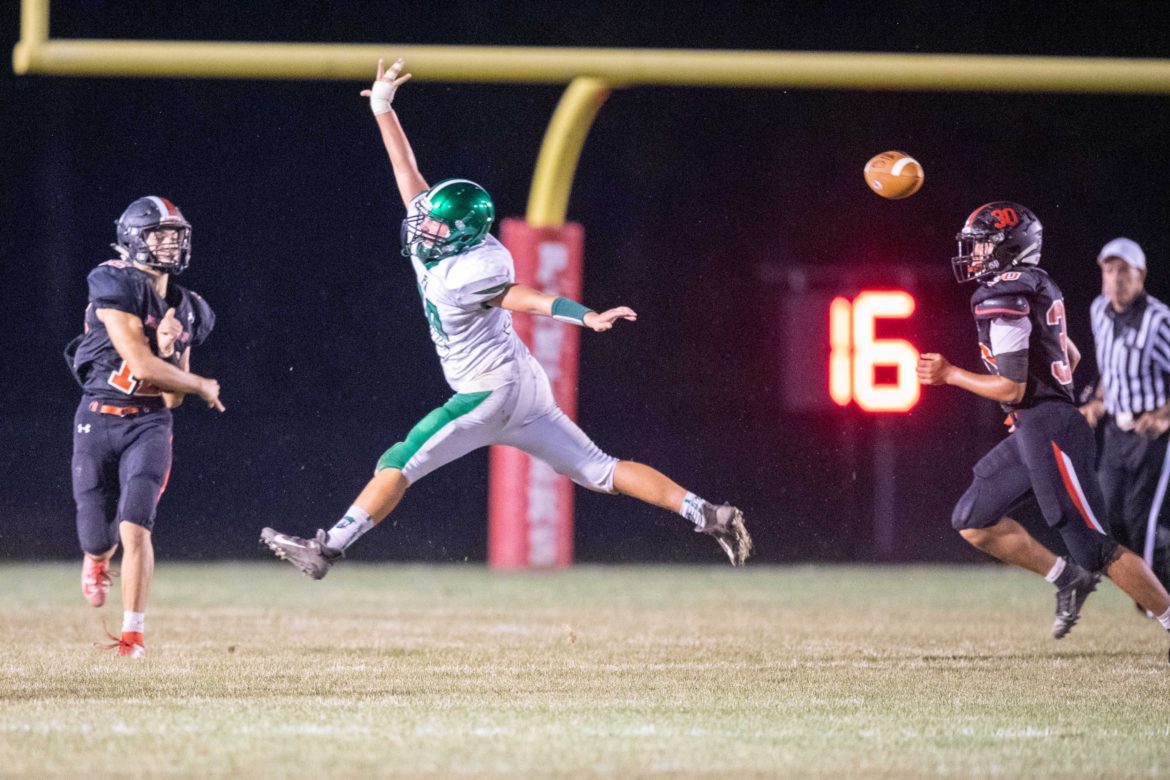 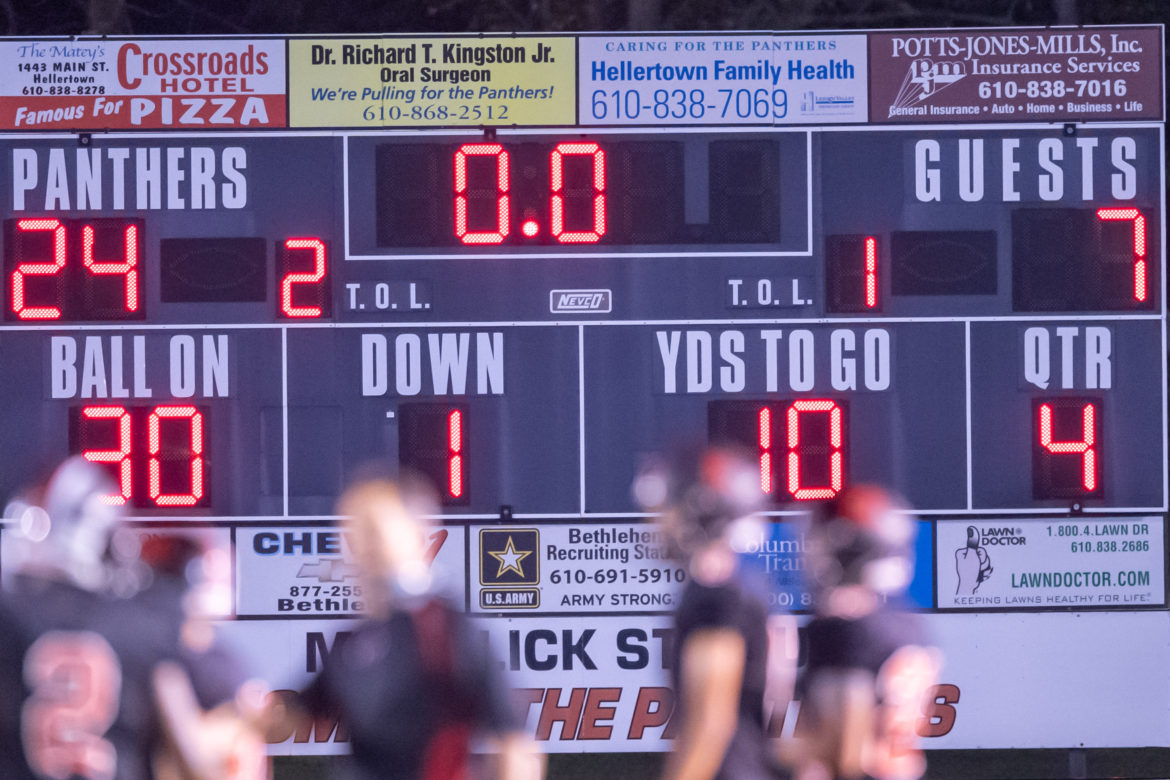