The Fountain Hill Police Department said Thursday that officers arrested four teenage boys, ages 16 throught 17, after they were stopped in a vehicle that had been stolen earlier from a borough resident.

The news came as the borough is in the throes of an at-times contentious conversation about its police force’s future, as a result of budget woes.

In a post on the Fountain Hill Police Officer Association Facebook page, police said that shortly after midnight Thursday their department received a report of a stolen vehicle in the 1300 block of Jeter Avenue. 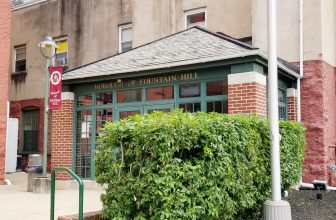 The Fountain Hill Police Department is located inside Borough Hall, which is at 941 Long Street. (FILE PHOTO)

“Several hours later, an alert FHPD officer spotted the stolen vehicle in the 1200 block of Delaware Avenue,” police said. “Officers attempted to stop the vehicle, which fled into the City of Bethlehem and stopped at the intersection of Cherokee Street and Dakotah Street.”

Police said that at that point the four juveniles who were allegedly in the stolen vehicle fled on foot, and were apprehended a short time later in the 400 block of Pawnee Street.

Police added that a search of the stolen vehicle led to the confiscation of a loaded handgun with an altered serial number, which police said they believe may have “been stolen during a night-time crime spree in the borough earlier this week.”

Police did not detail in their post what occurred during the alleged crime spree.

However, according to police, the 17-year old driver of the stolen vehicle was charged with theft, receiving stolen property, fleeing or eluding police and related traffic offenses.

That boy was taken to Lehigh County Jail pending a preliminary arraignment, police said, while the other three juveniles were released pending the filing of criminal charges in juvenile court.

Among the various options Fountain Hill Borough Council is expected to consider this fall–as it contemplates a tight 2020 budget in a borough that already has the highest municipal tax rate in Lehigh County–is a plan to outsource some police coverage to the Pennsylvania State Police.

In an op-ed published last week, Borough Council President Leo Atkinson outlined that proposal and said that the high percentage of untaxed land in the borough that is owned by St. Luke’s Hospital is contributing to the borough’s budget dilemma.

“In conjunction with the difficult property tax situation, our police operating budget has risen 31 percent in the last five years,” he added. “Total police costs (including pension and healthcare contributions) have gone up more than 45 percent and make up at least 53 percent of our general fund expenses.”

At least 100 residents on both sides of the issue flocked to Fountain Hill Borough Hall Monday, where council was scheduled to discuss the future of the police department after hearing a pre-scheduled presentation from a state police official.

The presentation and discussion, however, were postponed until Tuesday, Sept. 17 due to the large size of the crowd, which overflowed from the meeting room into the hallway and council chambers, pushing the room beyond its legal capacity according to the fire code.

Since it has not been the norm for Fountain Hill Police to share news about arrests on their association’s Facebook page, one resident questioned whether the sharing of the information was simply a reaction to the current borough-wide conversation.

“Why haven’t we seen these reports before the night shift dilemma began?” asked Phil Morganello in a comment on the post.

A page administrator responded thusly, with a reference to the convenience store located at 1429 Broadway in the borough:

There was a time when the press would visit FHPD on a regular basis and report all arrests. For some reason that seems to have faded away and now they only come around for the internal drama and the occasional high profile case. We have no official press release program in place as of yet and we’re learning as we go. Hopefully this will become a regular thing so the residents can see what we really do when we’re not “just standing around at Wawa.”

Fountain Hill Mayor Carolee Gifford commented on the post in support of the department, as did a number of other people.

“Thank you for all the great work you all do to keep us safe!” Gifford exclaimed.

And a user by the name of SB Lechauweki said, “This is exactly why we need our borough police 24/7!! I will gladly pay the higher taxes for a cleaner and more secure borough!!”