If you have a junked car–also known as a clunker–stored on your property with no plans to repair it you may have already received a letter about your vehicle from the Borough of Hellertown. If not, officials said Monday that you can expect to receive one soon. 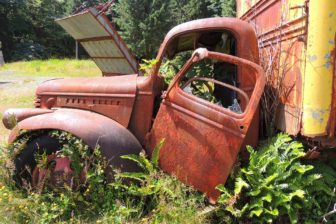 The borough has had a junked vehicle ordinance on the books for many years, however enforcing it hasn’t always been a top priority.

However, following complaints by several residents about neighbors who’ve been using their yards to store numerous inoperable vehicles, borough police recently stepped up enforcement of Chapter 430 in the borough’s Code: Vehicles, Junked and Abandoned.

The ordinance defines a “junked” vehicle as “a vehicle…which meets the definition of ‘nuisance’ and which has been stored on the premises outside of an enclosed structure, which shall be defined as having four walls and a roof, or covered by an opaque tarp, for a period in excess of 15 days.” In order to meet the nuisance definition, the vehicle must be “unable to move under its own power” and have at least one of a number of physical defects enumerated in the ordinance; defects such as “one or more flat or open tires or tubes which would permit vermin harborage” and “broken headlamps or taillamps with sharp edges.”

Hellertown Police Chief Robert Shupp told borough council that his department will continue its stepped-up enforcement efforts through the end of the month, at which time he expects that all parts of the borough will have been scrutinized for junked vehicles.

In the meantime he asked anyone who has a junked vehicle or junked vehicles stored on their property to “please be proactive” and remove them before they receive a letter.

If they are working on their vehicle, Shupp said his department will try to be accommodating.

“We have the ordinance. We just need to enforce it,” commented councilman Earl Hill during the discussion.

And borough council president Tom Rieger said he believes the borough is “moving in the right direction” with the crackdown on junked vehicles.

He said that residents who wish to report such a vehicle to the borough can do so by filling out a complaint form at the zoning and codes enforcement office in Borough Hall.