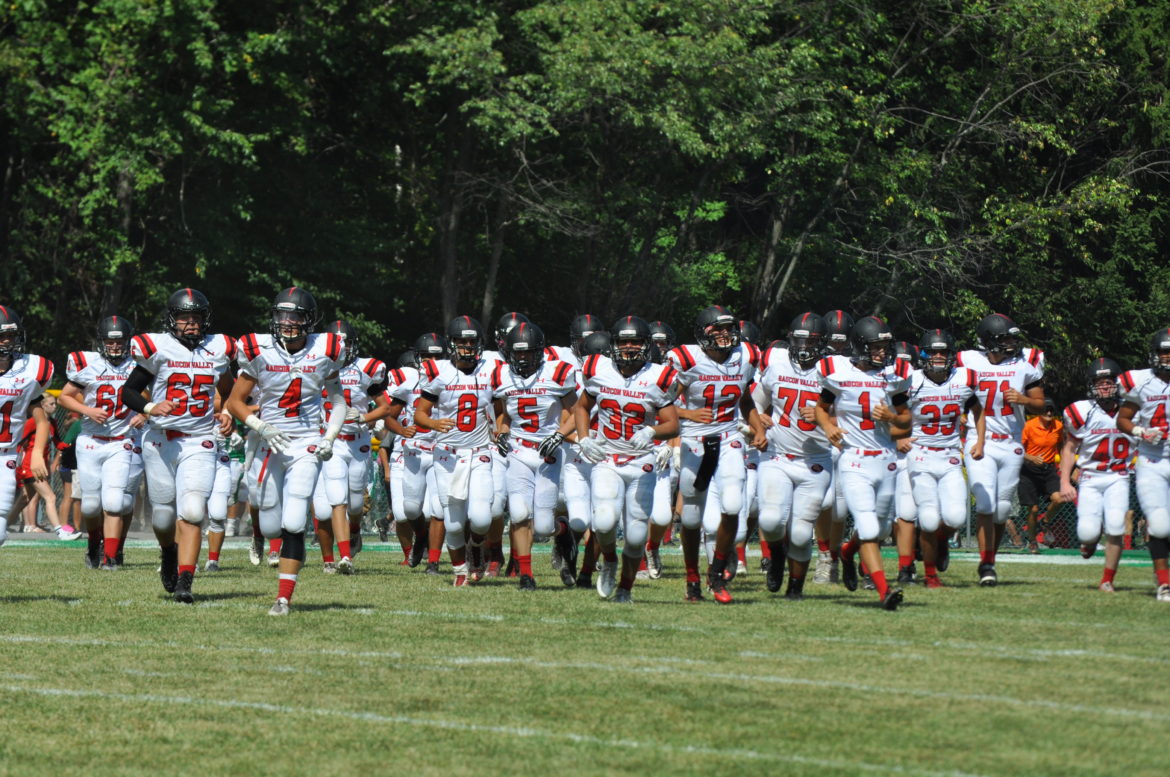 The Panthers will take the field on Saturday afternoon at Wilson.

Saucon Valley will hit the road this weekend for a rare Saturday afternoon, Colonial League clash. The Panthers (5-1), will travel to battle the surging Wilson Warriors (3-3).  After last week’s homecoming nailbiter against Bangor, Saucon is expecting a four-quarter war against the Warriors as part of Wilson’s homecoming festivities.  Wilson has fallen to Northern Lehigh (14-10), Salisbury (27-24) and Northwestern Lehigh (49-20).  The Warriors own wins against Palisades (15-12), Catasauqua (53-8) and Pen Argyl (42-21).  After losing two of their first three games, Wilson has won their last two contests and surely aims to ride that momentum against the Panthers to try and finish the season with a nice run of victories.  Saucon Valley is hanging on the heels of first-place Southern Lehigh (6-0).  Both Wilson and Saucon are playing for a high seed in the District XI 4A tournament.  This is a big game, with a lot at stake.  Let’s get to the matchup!

Wilson will likely bounce back and forth between a base 4-3 look and a 4-4 defense. On the back end they play mostly zone with two or three deep defenders.  With how well Saucon Valley runs the football, don’t be surprised to see a fair amount of man-to-man defense as well.  The Warriors have a solid linebacking corps and they are not afraid to blitz.  They also like to twist and stunt their interior defensive lineman.  Overall, the Warrior defense has decent size and are relatively quick.  They play hard, are well-coached and will hustle for all four quarters of the game.  Considering the powerful Panther running game it will be no surprise to see Wilson pack the box with eight defenders to stop the run and try to force the Panthers pass. Saucon averages 266 yards per contest on the ground and 66 yards per game through the air.  The Panthers average 24 points per game while the Warriors tend to give up an average of 21.  This is going to be a tight game.

Saucon Valley’s ground game is led by sophomore running back Damian Garcia. Garcia (#30) measures 5’10”, 165 and is closing in on his first 1,000 yard season.  He averages 8.5 yards per carry and 142 yards per game. Garcia has run 100 times for 854 yards so far this season. He has scored six touchdowns. Three of his TD’s are from 50 yards out or more including one from 86 yards out.

Sophomore Dante Mahaffey (#12) is in his second year calling the signals for the Panthers.   He is a dual-threat type of guy who can run and throw.  Mahaffey has completed 21 of 41 passes for 399 yards and six TD’s.  Mahaffey has not thrown an interception this season.  On the ground, he is credited for carrying 55 times for 177 yards and six additional touchdowns.

Mahaffey’s primary receiving targets are sophomore Ty Csencsits (#11) and freshman Alex Magnotta (#8).  Csencsits is a sophomore who has 8 catches for 210 yards.  With an average of over 25 yards per catch, Csencsits has caught three TD’s from Mahaffey.  Magnotta, at 6’2″ with long arms, is a nice sized target and more of a possession receiver.  He has 7 catches for 66 yards and a TD.  Both Csencsits and Magnotta have excellent hands.

Paving the way for the Saucon Valley ground attack is the Panther offensive line who are traditionally known as the “Hogs”.  Seniors Nick Warnke (#77) and Evan Deily (#65) are the top hogs.  Joining the seniors will be three-year starter David Osman (#60), Eli Deily (#76) and Cody Swinney (#56). Deily and Osman are juniors, Swinney is a sophomore.  These powerful Panthers lead a team that averages 6.6 yards per carry.

When the Warriors have the ball…..

The Warriors, from an offensive standpoint, are “multiple”, but they seemed to have found their identity through the air using shotgun, spread formations.  Sophomore Cayden Stem (#12) is the Warrior behind center.  He is listed at 6’2″, 205.  Stem has 38 completions on 80 attempts for 662 yards.  He has thrown 8 touchdowns and 4 interceptions.  Stem does not register as much of a run threat, but he does have the ability to scramble and pick up first downs if the Panthers get sloppy with their pass rush.

Damian Simpson (#28) is a third ball carrier worth mentioning.  Simpson, a sophomore, shows up in the Wilson program at 5’9″, 150.  Simpson only has 10 carries, but they have gone for 72 yards.  Simpson appears to have the quickness and speed to be a game-breaker.  Last season, Simpson had a 99-yard kickoff return for a touchdown.  The Panthers will want to keep a watchful eye on #28 when he enters the game.

The key matchup once again appears to be how well  Saucon Valley can defend the pass. The Warriors’ aerial attack is developing and getting better.  The Panthers secondary has struggled struggled against “Air-Salisbury” Week Three and also last week against Bangor.  However, the Warriors don’t have the speed of Salisbury, nor do they have the size of Bangor.  If the Panthers can limit Stem and the Warrior receivers then it will be a matter of whether Wilson’s run defense can stop Damian Garcia and the other Panther runners.  If neither team’s defense can step up and get stops, it could be the last team with the football that leaves the field victorious.

A Saturday matinee at Wilson will surely test the Saucon Valley Panthers. Nonetheless, it is going to be a fabulous day for high school football!