Hellertown Police said in a news release Sunday that a local man is charged with a misdemeanor after he allegedly ignored the instruction of a flagger to stop at Front and Water streets, struck her and drove off last month.

Police said Christopher George Weaver, 26, of the 400 block of Oxford Drive, Bethlehem, was driving a truck and towing a trailer when he approached the intersection one afternoon during the final full day of the Water Street Bridge project.

Shortly after 4 p.m. on Saturday, Sept. 28, police said Weaver approached the intersection and was instructed by the flagger to stop before turning left from Front Street onto Water Street.

Instead of obeying the command, according to the police version of events, Weaver “disregarded the flagger’s direction and turned left onto Water Street, (striking) the flagger with the front right passenger’s side of the truck.”

Weaver then “continued down the road and left the scene,” police said in the news release.

When officers arrived at the scene police said they obtained information from witnesses who helped identify Weaver, who was subsequently summoned to return to the scene.

At that time, police said Weaver was “taken into custody for leaving the scene of (an) accident involving injury.”

The flagger who was struck was taken to a local hospital for a medical evaluation, according to police, who did not identify her injuries in the news release.

Court records indicate that following a preliminary arraignment on one count of Accident Involving Death/Personal Injury (M1) before District Judge Robert Hawke on Sept. 28, Weaver was released on $8,000 unsecured bail.

A preliminary hearing in his case is scheduled for Friday, Oct. 18 at 3 p.m. before District Judge Alan Mege at Northampton County Court 03-2-04 in Lower Saucon Township, according to court records. 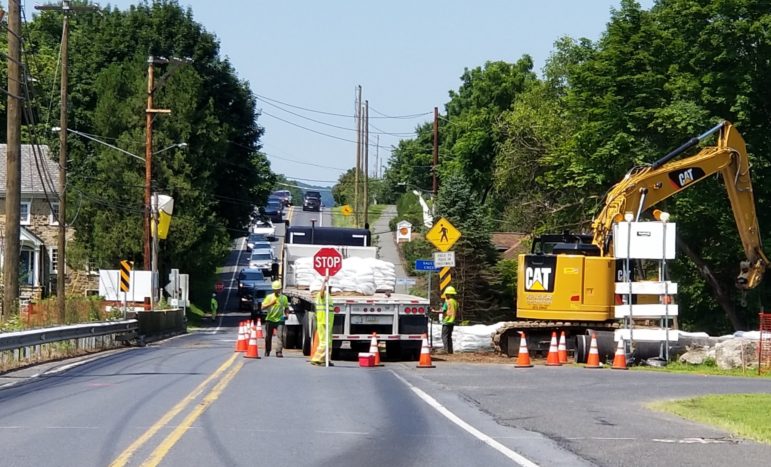 A flagger holds a stop sign to halt traffic on the east side of the Water Street Bridge at the start of PennDOT’s replacement project in July. The contractor who was in charge of the project, Kriger Construction, employed many flaggers to help direct traffic around and away from the work zone on both sides of the bridge, which opened to traffic Sept. 29. (FILE PHOTO)