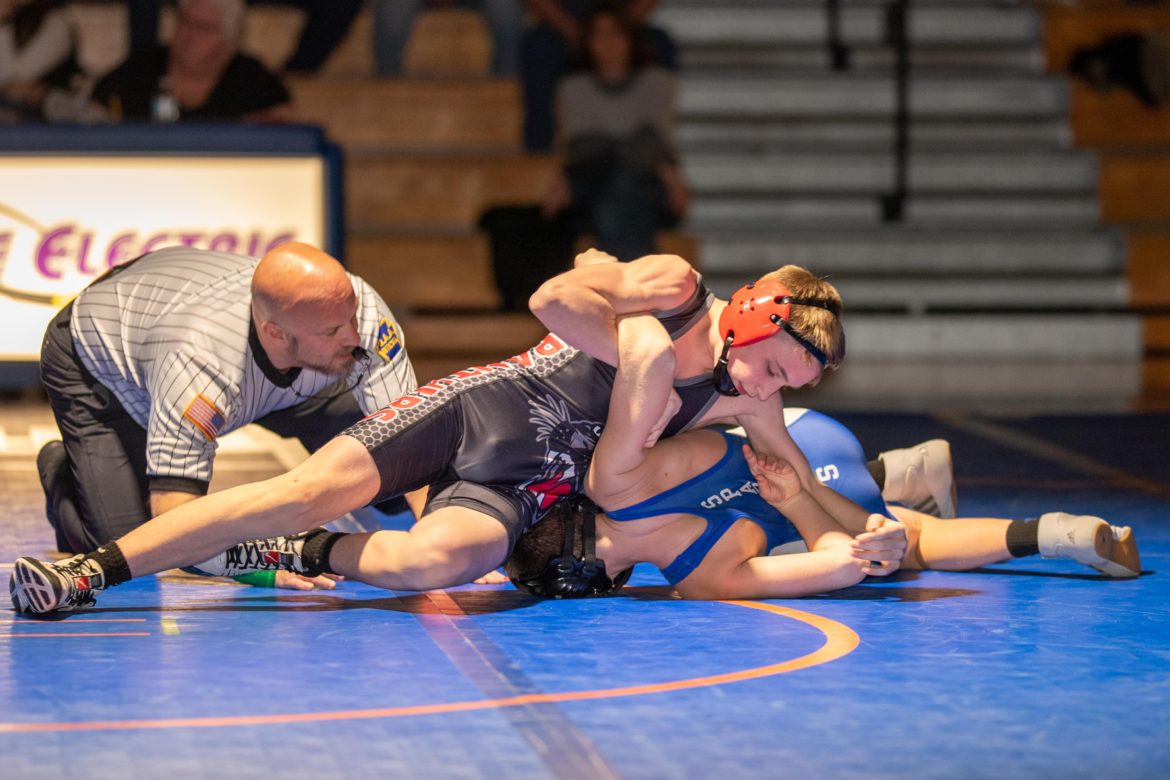 Saucon sophomore Connor Nicholas picking up six for the Panthers.

Since their opening night setback to the Notre Dame ‘All-Area’ Crusaders, the homegrown Saucon Valley wrestlers have been nothing less than dominant.  In the three Colonial League matches since their 47-27 setback, the Panthers have defeated the opposition by an average score of 61-13.  At the halfway point of the season, the Panthers appear poised to prosper in the post-season.

On Tuesday night, Saucon Valley tallied their third straight Colonial League victory of the regular season with a 67-12 win over Southern Lehigh.  With the match starting at the 106 pound weight class, the Panthers roared out of the gates with three consecutive pins.  In just two minutes and sixteen seconds of wrestling time, Saucon jumped out to an 18-0 advantage.  Ermal Duka (106), Connor Nicholas (113) and Travis Riefenstahl (120) all flattened their Spartan opponents.  Nicholas’ pin came in under a minute while Riefenstahl’s fall came in only :15 seconds. 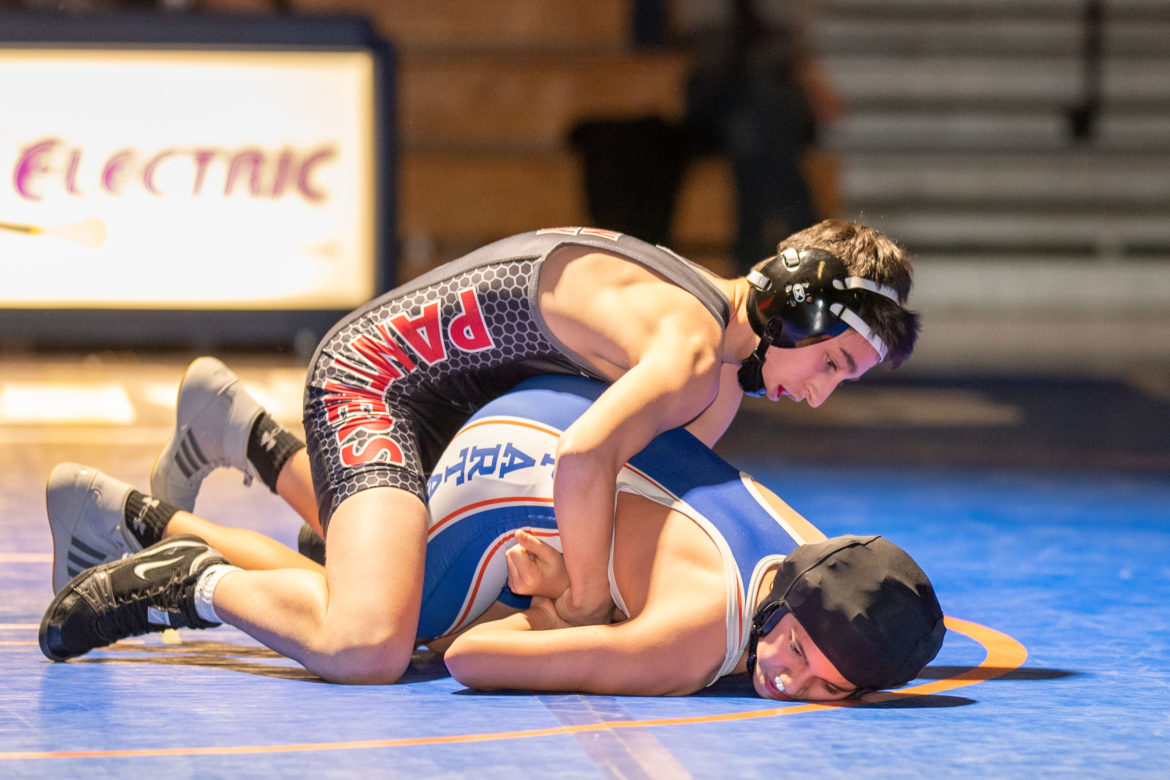 Ermal Duka in firm control for the Panthers.

At 126 the pace of the match may have slowed down, but the action certainly did not.  Using two takedowns and three near fall points, Saucon senior Kevin Dyer jumped out to a 7-1 first period lead over Southern Lehigh’s Deacon Dickinson.  Dickinson answered with an escape and a takedown in the second period to close Dyer’s lead to 8-4.  Dyer, however, with an early escape and takedown to start the third period, was able to battle and hold on for an exciting 12-9 decision. 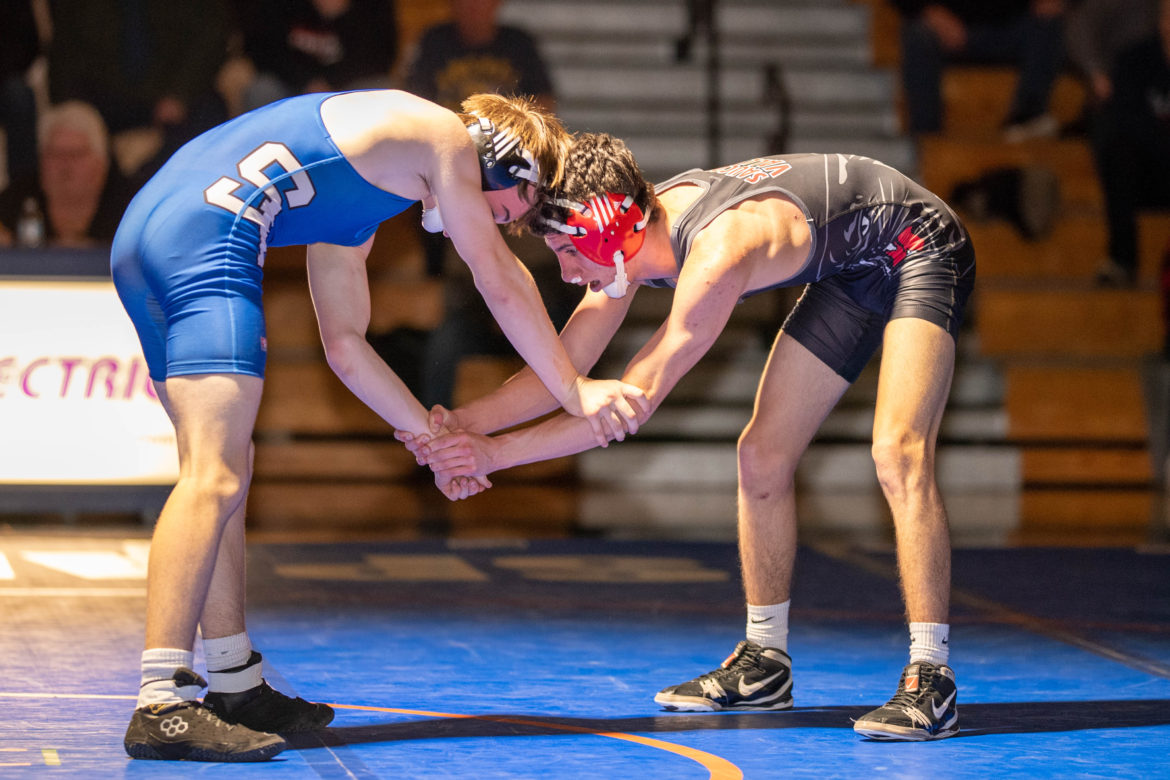 Dyer’s hard-fought victory must have inspired his Panther teammates to make a run.  Cael Markle (132), Jake Jones (138), Thomas Spirk (145) and Tyler Pfizenmayer (152) all added bonus points to the Panther side of the scoreboard.  Markle was awarded a forfeit and Jake Jones added another first period pin for the Panthers.  Spirk went for a tilt-a-whirl ride and turned his opponent five different times to gather a dizzying amount of back points which ended with a 16-0 first period technical fall.  Pfizenmayer followed suit riding tough and getting turns for another 16-0 first period tech-fall.  After eight bouts, Saucon Valley led 43-0. 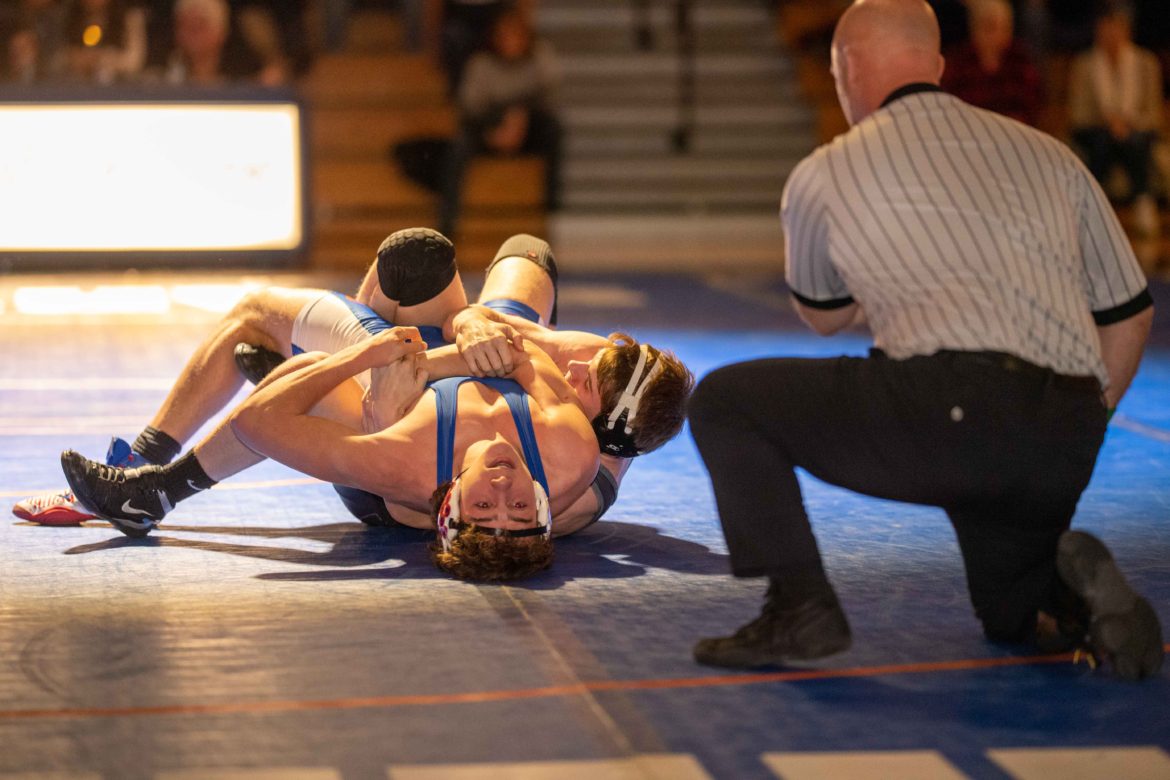 Thomas Spirk on top of his game and getting more back points for the Panthers.

The Spartans did get on the scoreboard with a fall at 160.  But,  Saucon Valley answered immediately at 170.  After quickly rolling up a 16-3 advantage, Saucon’s Matt Arciuolo finished his Spartan opponent with a pin midway through the second period.

Arciuolo got the Panthers back on track and Saucon Valley won three of the four remaining bouts with a little help from his senior classmates.  Dane Csencsits (182), Braydyn Lugardo (195) and Nick Warnke (285) each earned six points for the good of the Panther cause.  Lugardo and Warnke both registered pins while Csencsits was awarded a forfeit.  As a team, the Saucon Valley Panthers started fast and never looked back to defeat the Southern Lehigh Spartans 67-12. 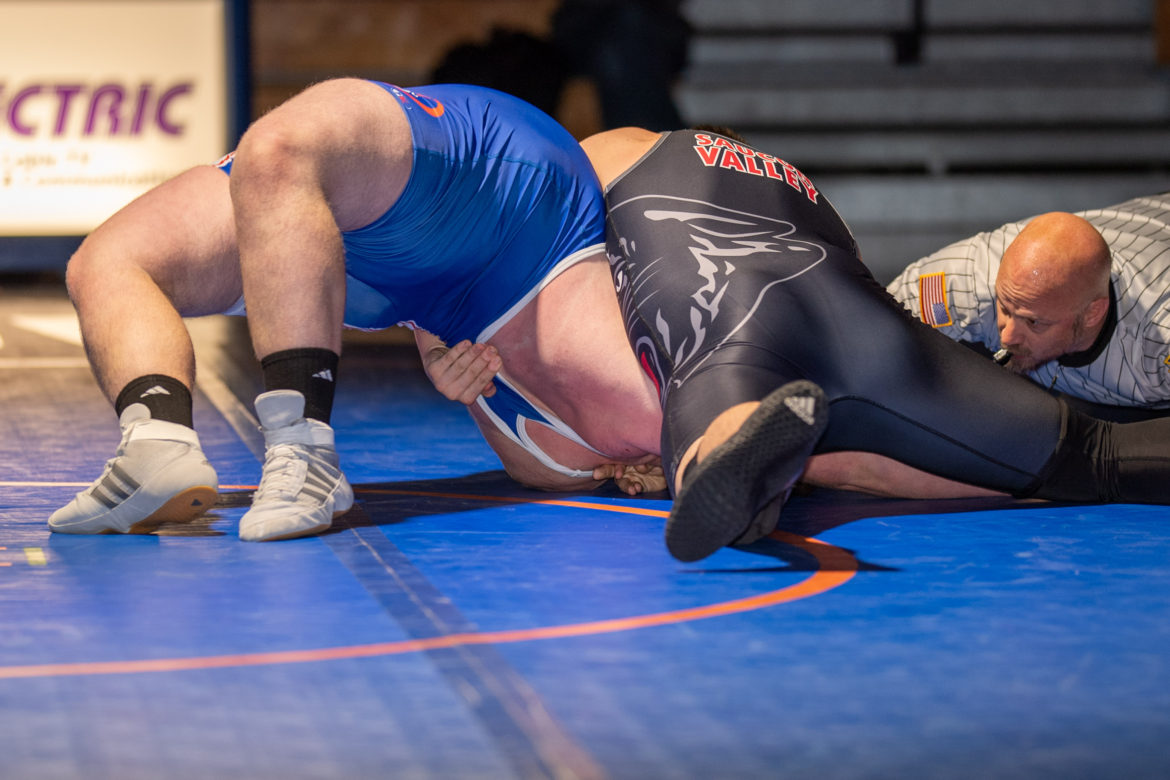 “The team came out ready to wrestle and picked up bonus points in a lot of matches tonight, which is always great to see.”

Panther Wrestler of the Match 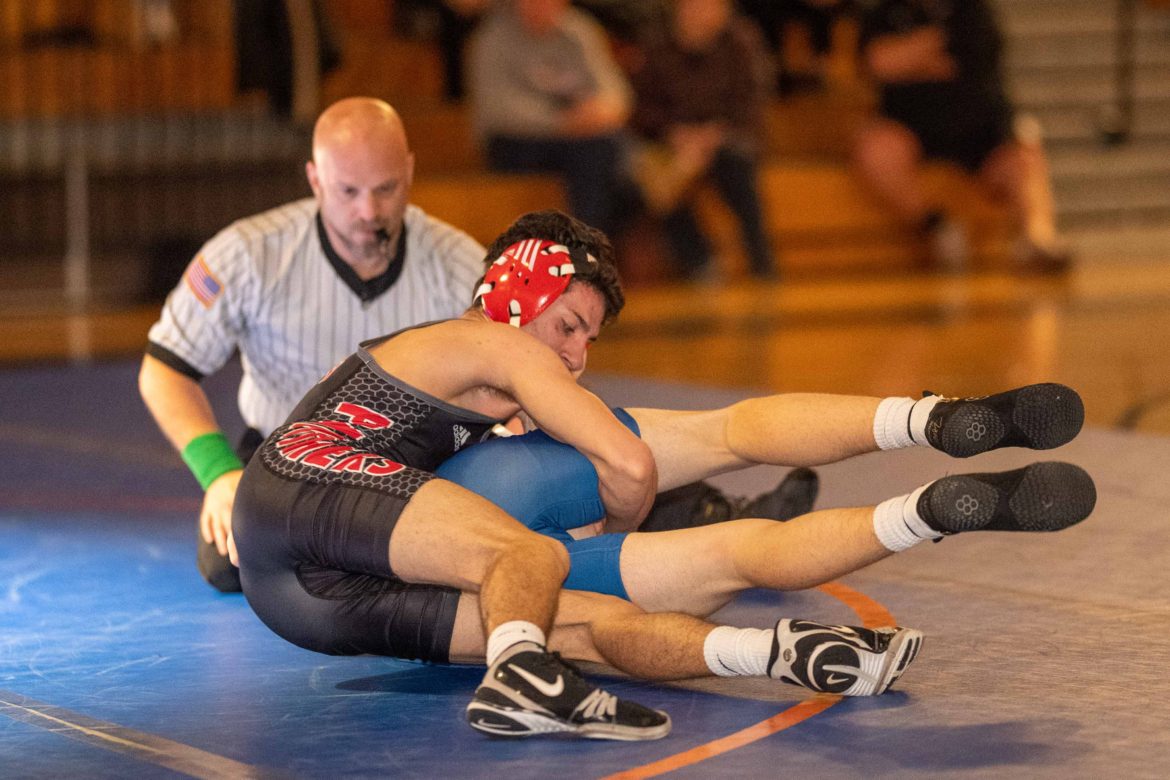 “Kevin wrestled an entire six minutes and came out with a hard-fought victory.”

Up Next:  The Panthers (3-1) will battle the Bangor Slaters (3-1) on Thursday Jan. 9th.  This Colonial League contest is scheduled for a 7 p.m. start.  Then, Saucon Valley is off to defend their title in the “Big Red Duals” at Souderton High School on Saturday. 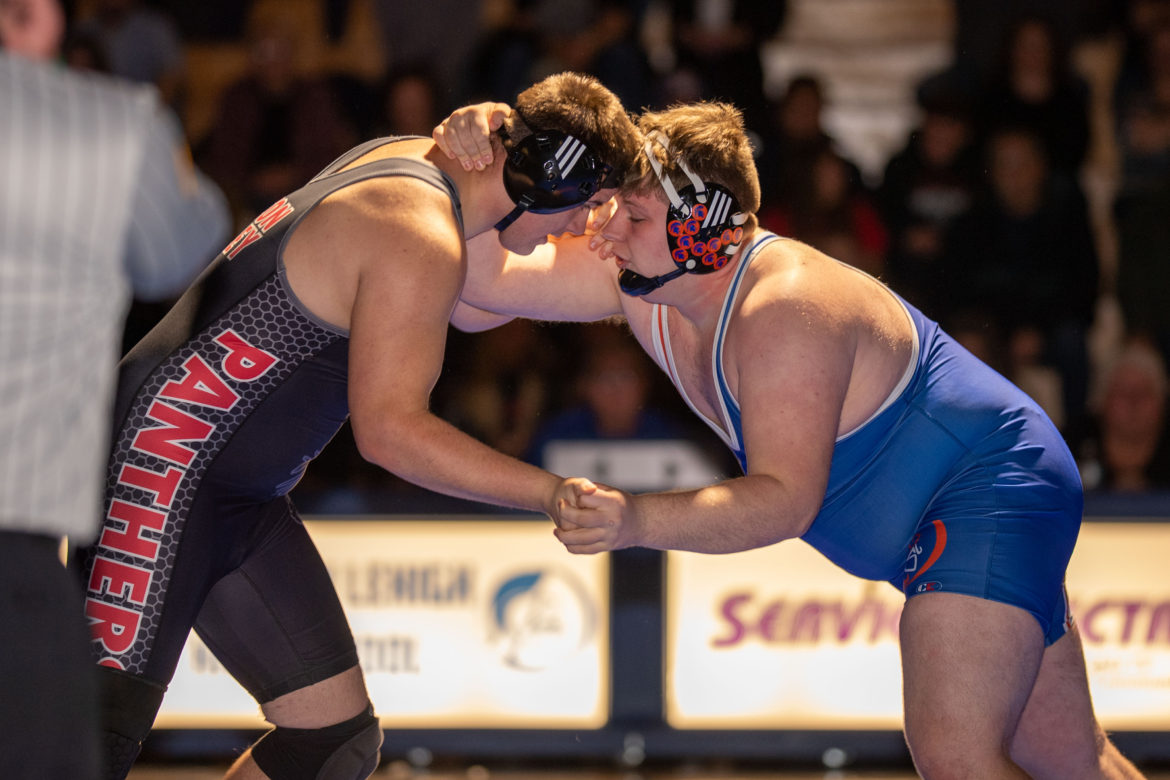 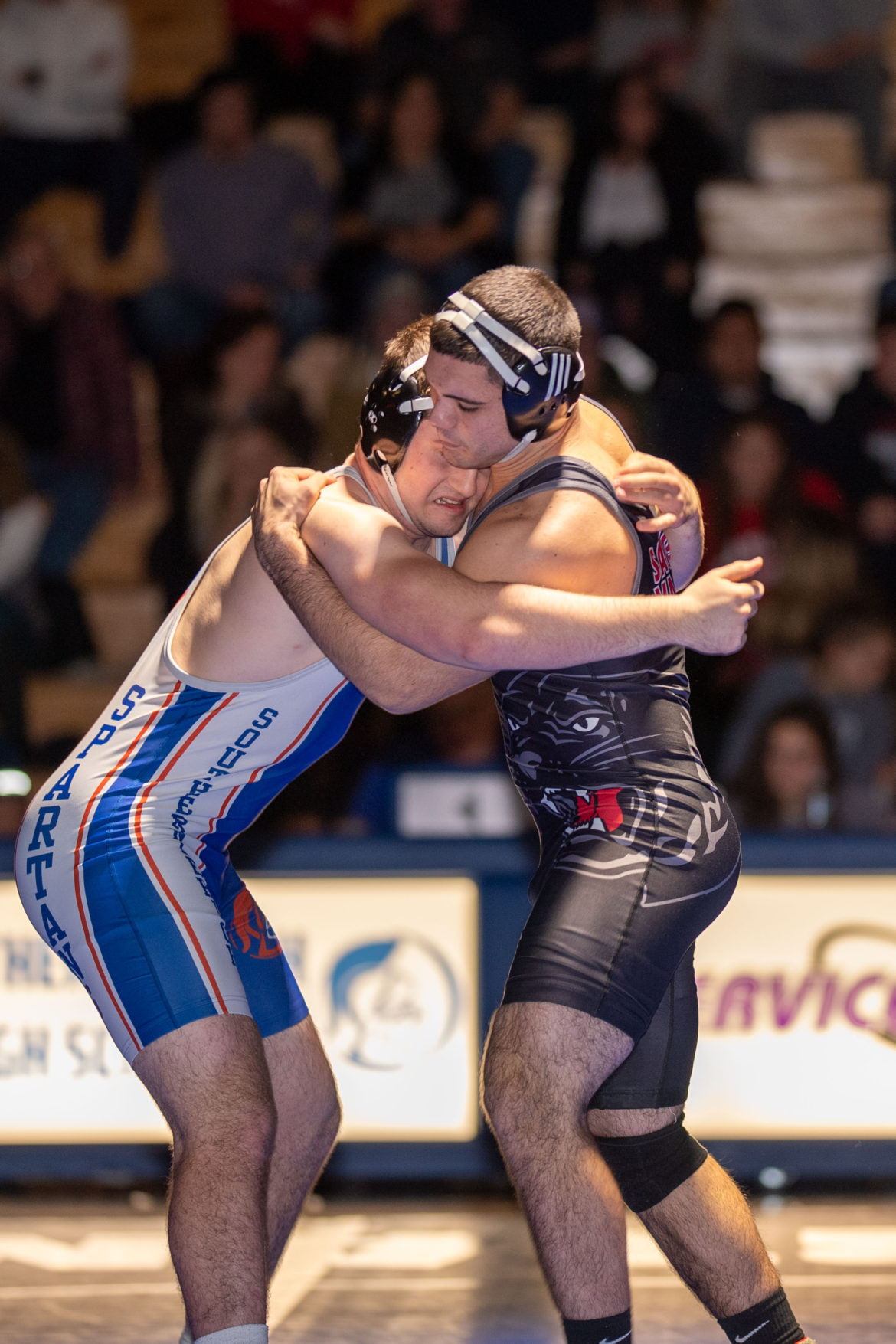 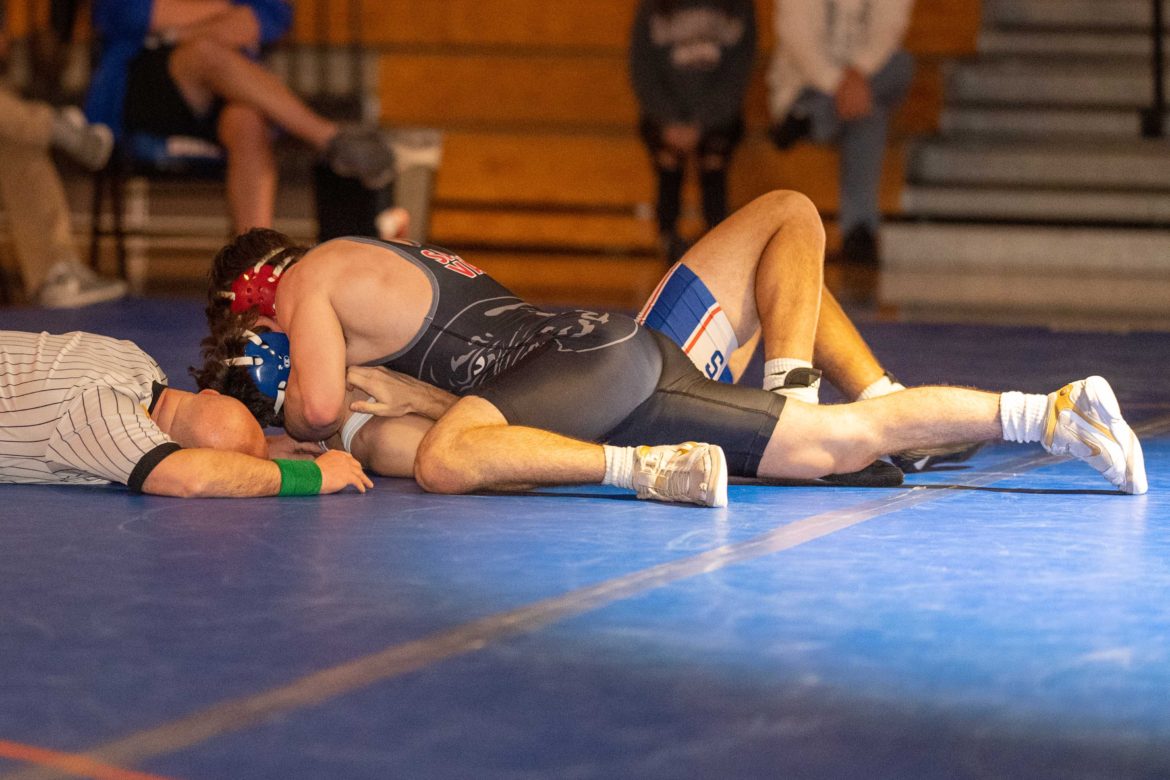 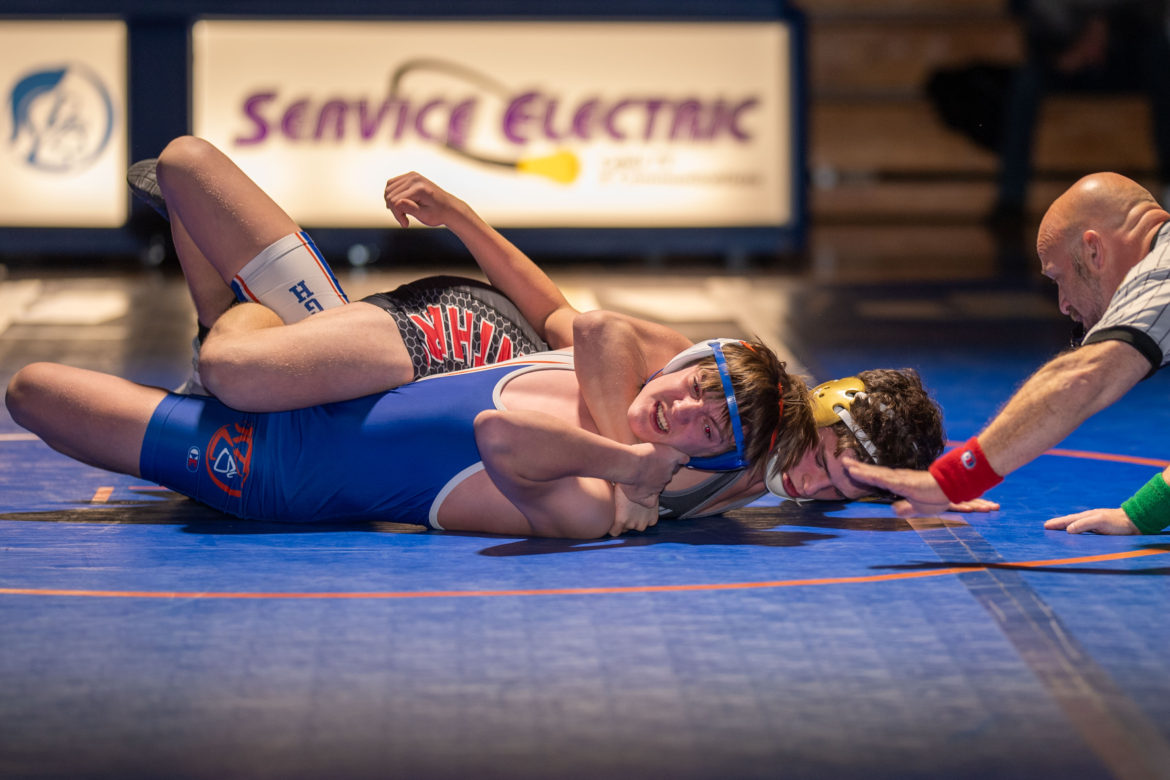 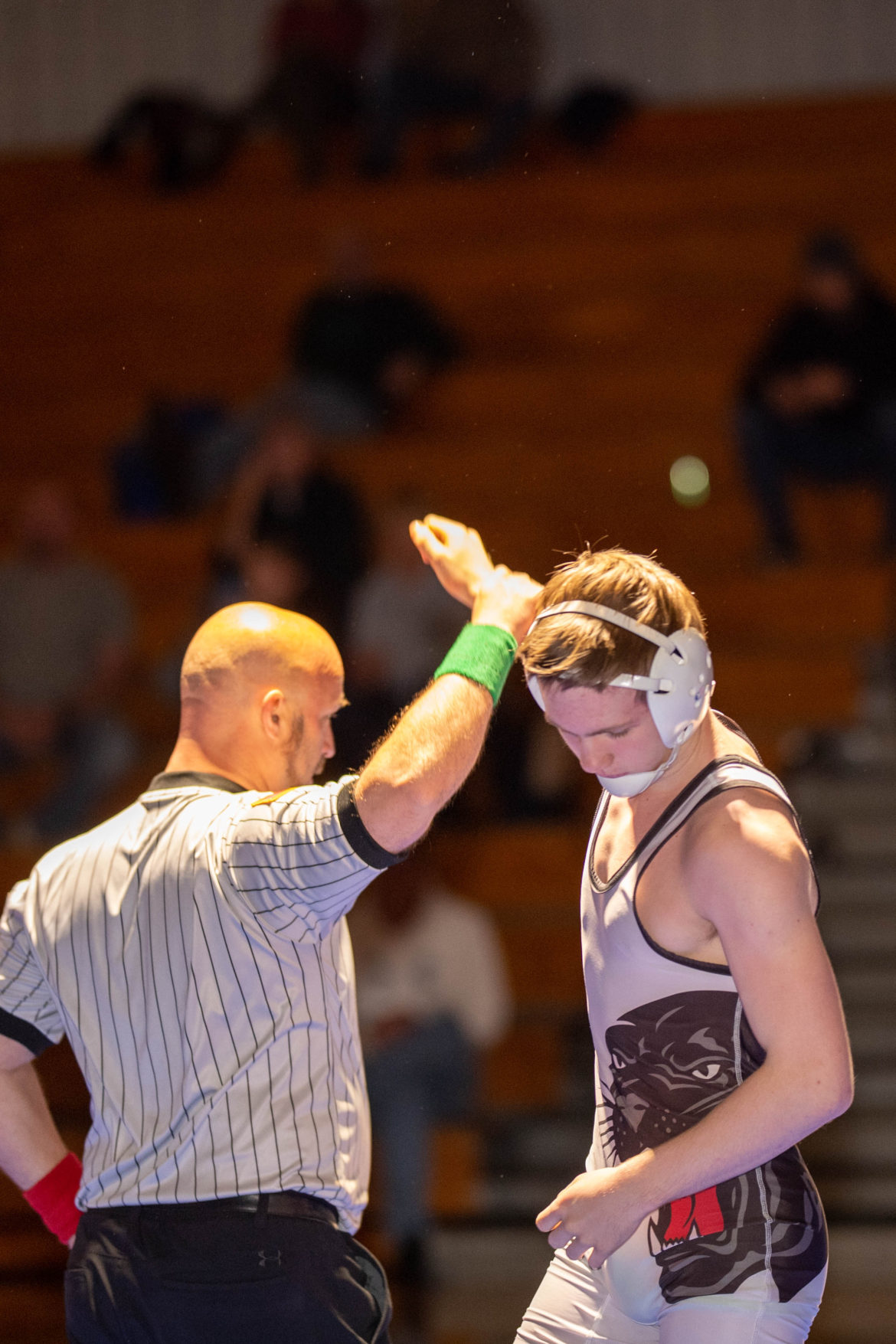 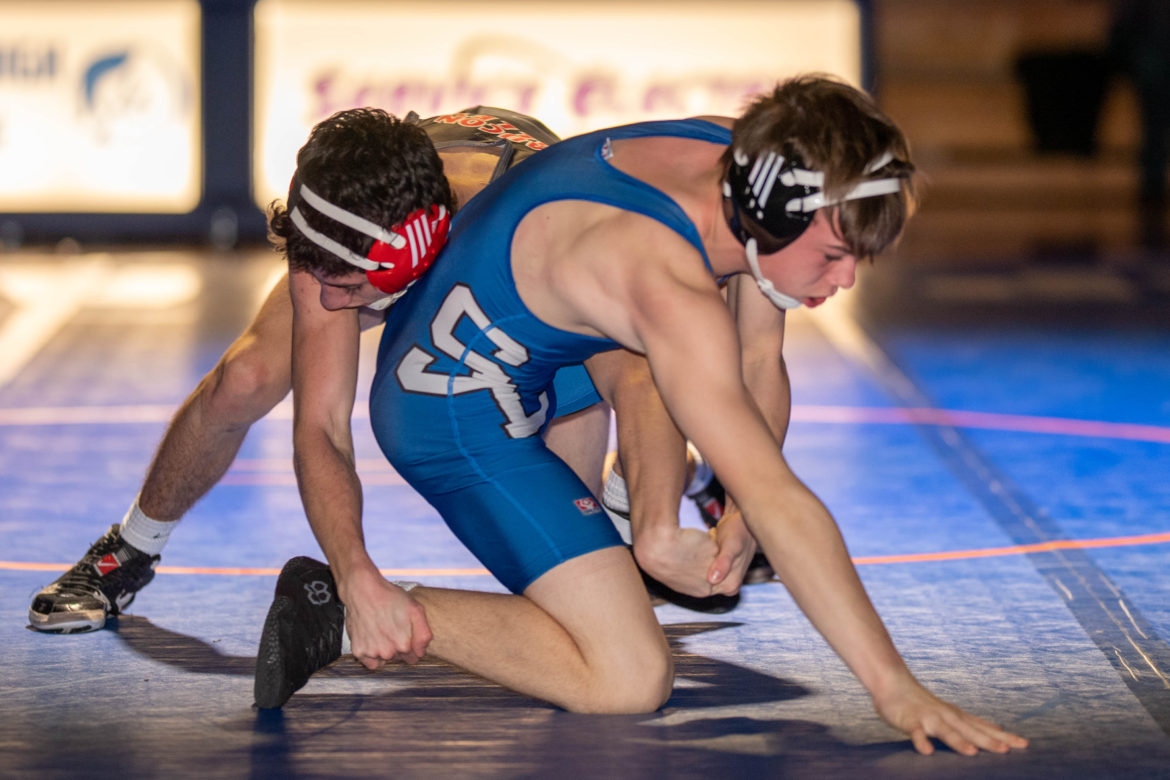 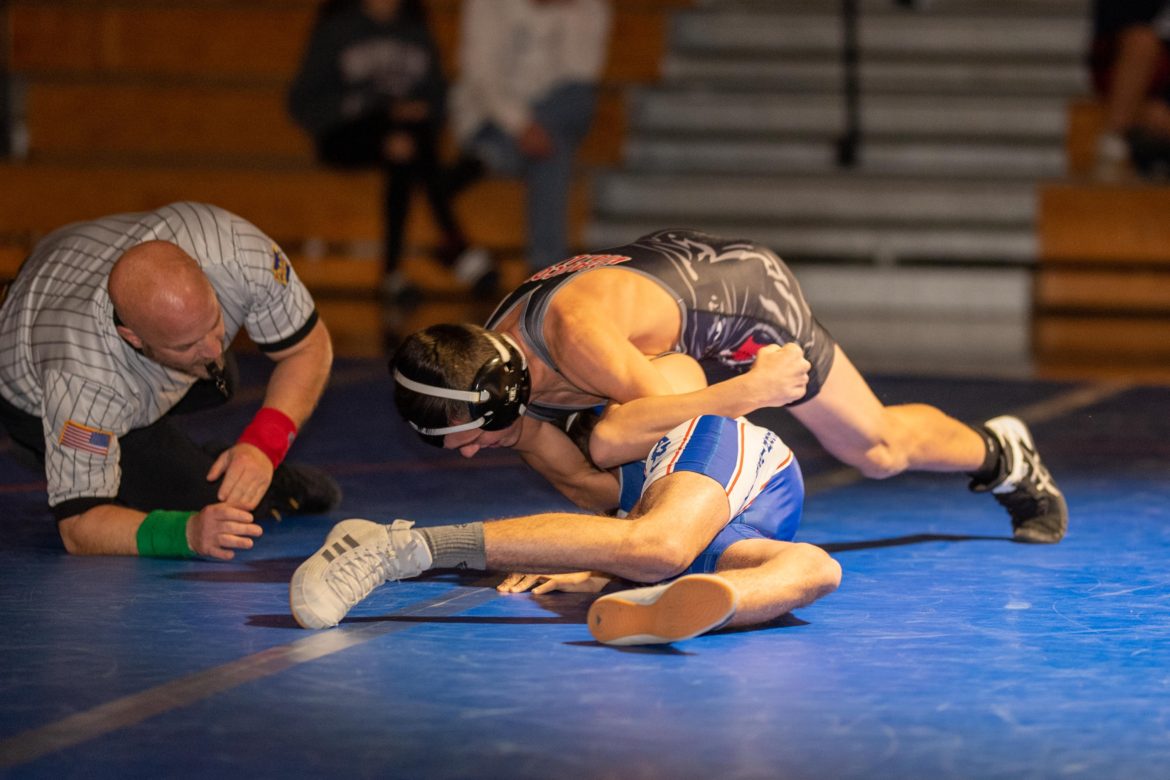 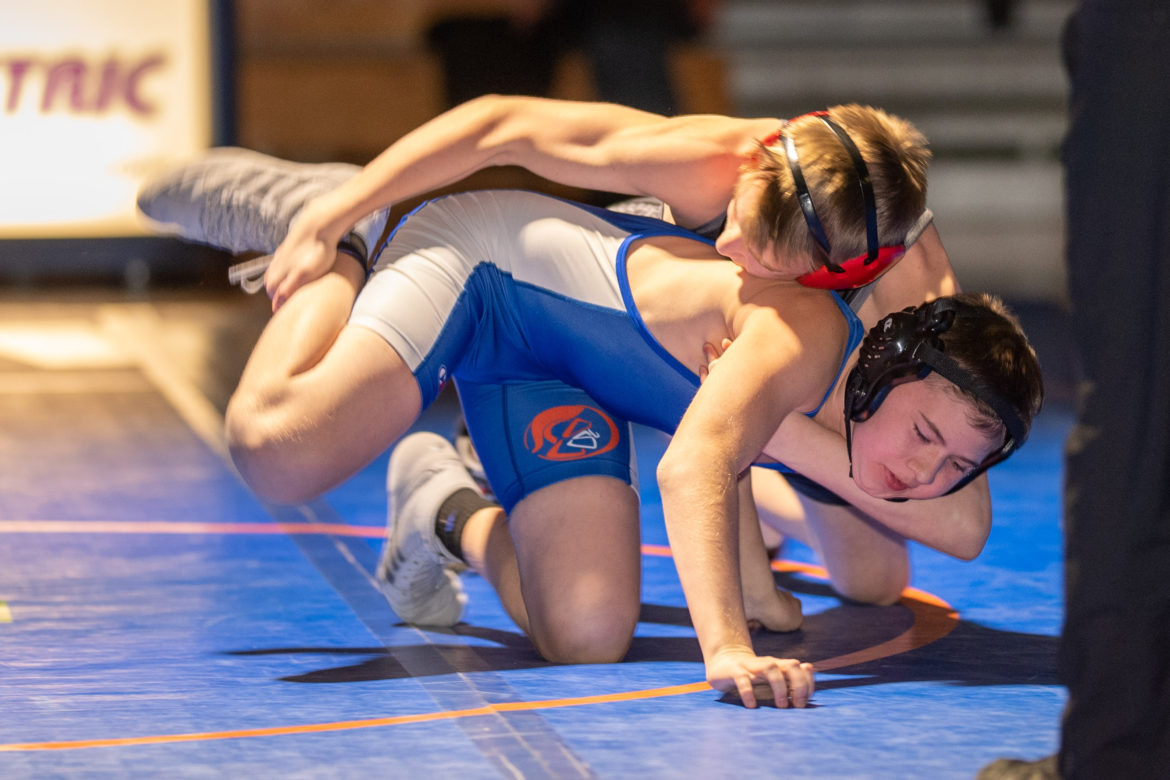 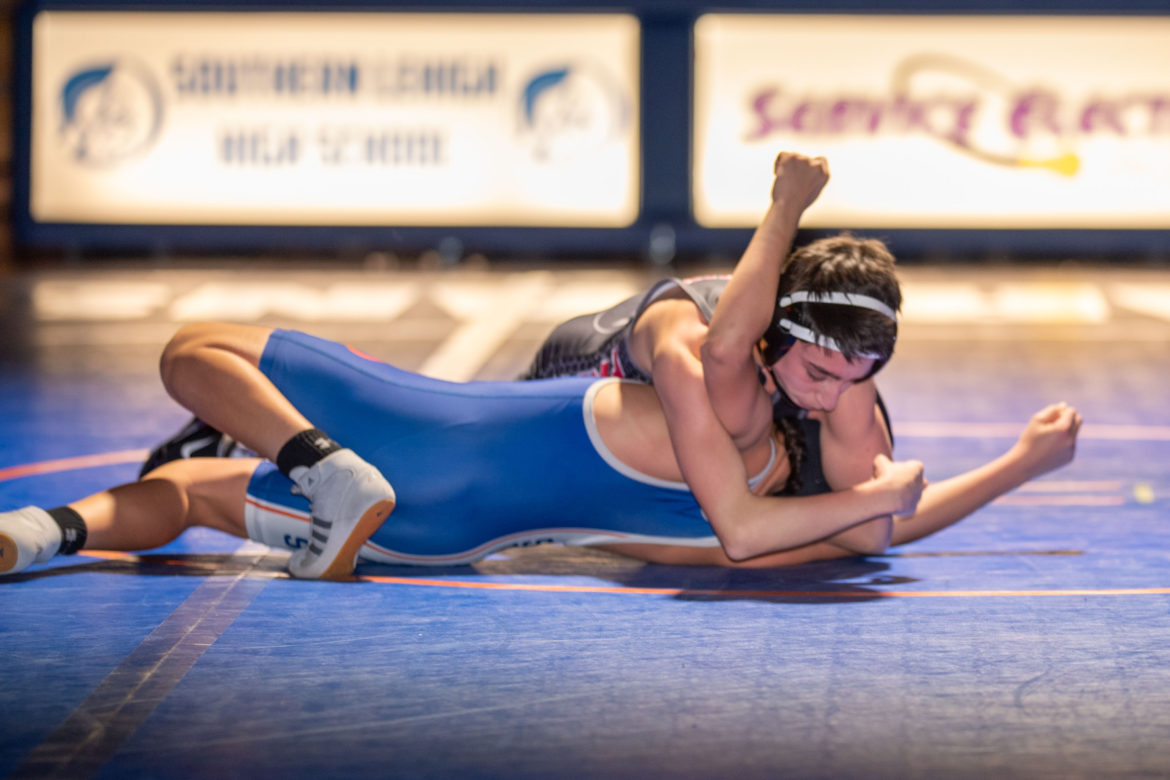