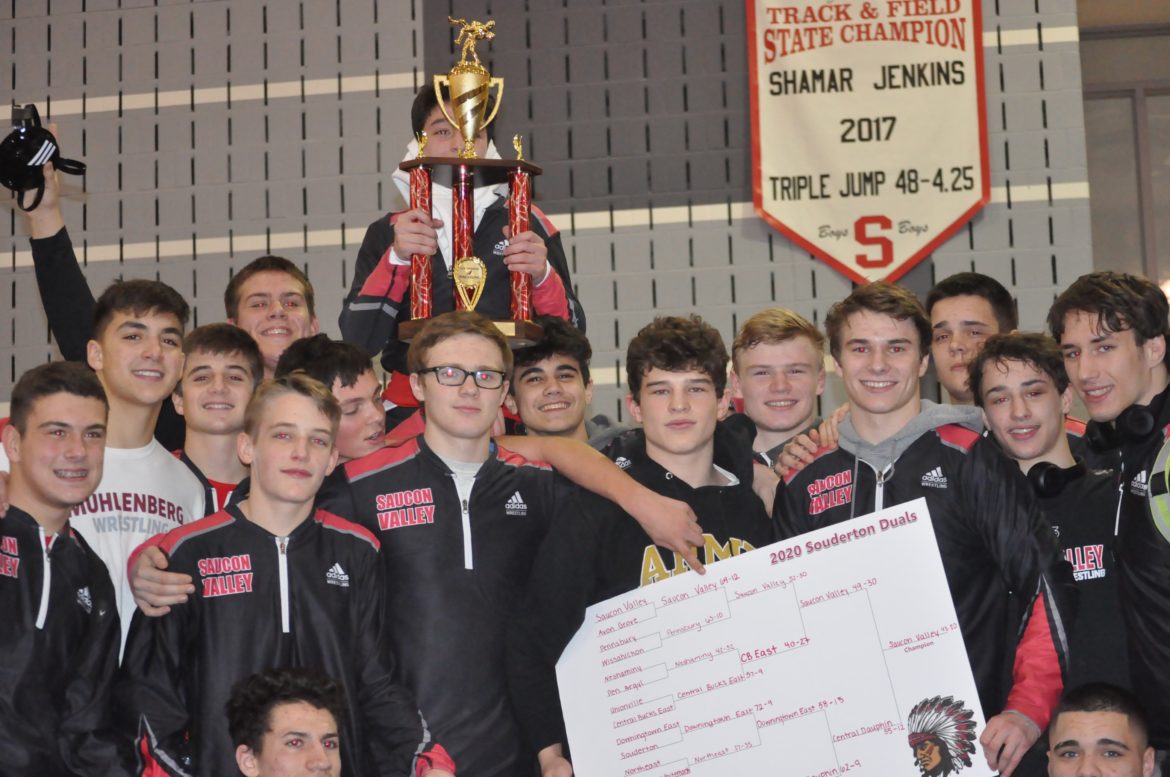 The Panthers showed a lot of heart when they repeated as the ‘Big Red’ Champs!

On Saturday, Coach Shirk and his Saucon Valley Panthers hit the road to compete in Souderton High School’s ‘Big Red’ duals.  This annual, dual-meet tournament features a selection of teams from around the region including Central Buck East (5-1), Central Dauphin (10-1) and Pennsbury (12-3).  There was plenty of quality wrestling action to be had in Souderton this past weekend.

Looking at the bracket, most high school wrestling afficianados likely pegged a Saucon Valley-Central Dauphin rematch in this year’s ‘Big Red’ final.  Central Dauphin, who is in PIAA’s AAA classification, placed three spots ahead of Saucon Valley in the team scores at this season’s Beast of the East and have a quality program with a healthy stable of highly skilled wrestlers. Last year, Saucon defeated Central Dauphin 32-27 to bring home the trophy from the ‘Big Red Duals’.

So, it was with much anticipation that Central Dauphin, who displayed throughout the day that they are a proud and confident bunch, squared off against the Panthers!

It wasn’t a great start for Saucon Valley.  But, even though Cael Markle (126) was pinned by Central Dauphin 2019 PIAA state qualifier Josh Miller to get things rolling, the Panthers earned a decision from Chris Arciuolo (132) and a pair of tech-falls from Jake Jones (138) and Thomas Spirk (145).  Saucon Valley created a 13-6 lead and a ton of momentum. 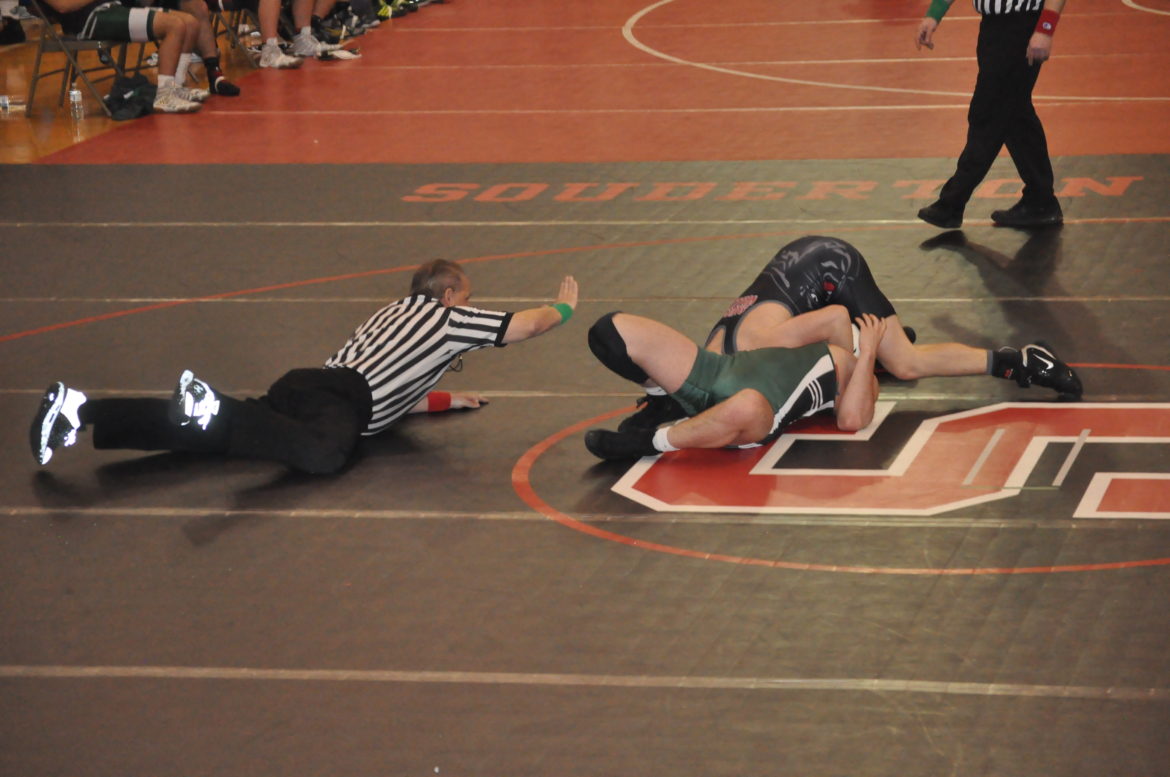 Saucon freshman Tyler Pfizenmayer bumped up and claimed a pin for the Panthers.

Then, in what turned out to be a slick move by the Panther coaching staff, Saucon forfeited to Central Dauphin senior Tye Weathersby at 152 and bumped freshman Ty Pfizenmayer up to 160 for the first time this season.  Weathersby, with a 25-3 record and also a 2019 state qualifier, was credited with the victory and the Rams closed their deficit to 13-12.

Saucon’s strategy paid off as the Panthers won the next three matches with two pins and a decision.  Pfizenmayer (160) and Matt Arciuolo (170) both wowed the crowd with first- period falls.  Dane Csencsits (182) did his thing for Saucon Valley while carefully hammering his way to an 8-4 workmanlike decision against a dangerous opponent in Tim Smith who owns a 13-4 record this season.  The Panther rally built a 28-12 lead. 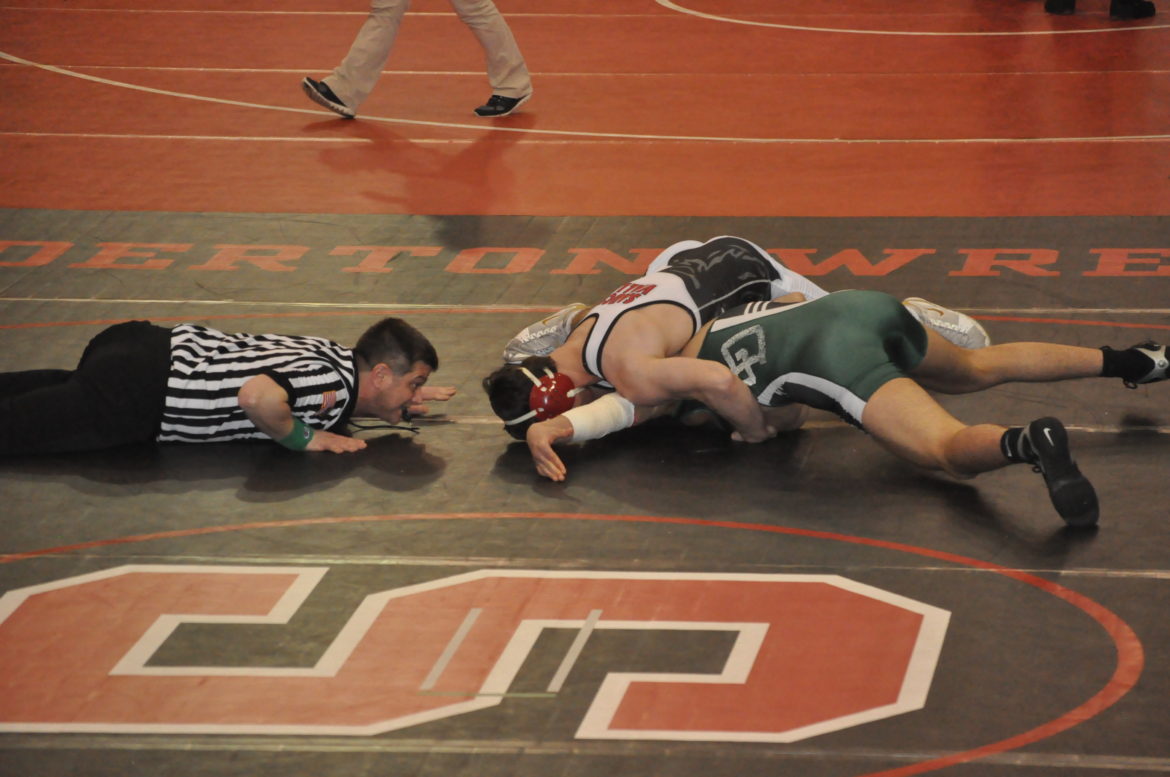 Saucon senior matt Arciuolo picking up six for the Panthers.

Saucon forfeited 195 allowing Braydyn Lugardo to get some much-needed rest.  But, the Rams showed no mercy with a pin by Central Dauphin senior Marques Holton at 220.  Holton, a 2019 PIAA state qualifer, cut the Panther lead to 28-24.  The four-point deficit was short-lived, however, when the Rams chose to forfeit to Saucon senior Nick Warnke at 285.  With three bouts to go, the Panthers held an uneasy 34-24 advantage.

With a whole lot of pressure building, Saucon Valley junior, Ermal Duka (106) took the mat to battle Central Dauphin freshman Nathan Fletcher. Duka jumped out to a 2-0 lead with a quick takedown early in the first period and desperately held on the rest of eternity to earn a 4-2 win for Saucon Valley.  Duka’s victory sent Panther Nation into all-out celebration mode as it clinched the match for Saucon. 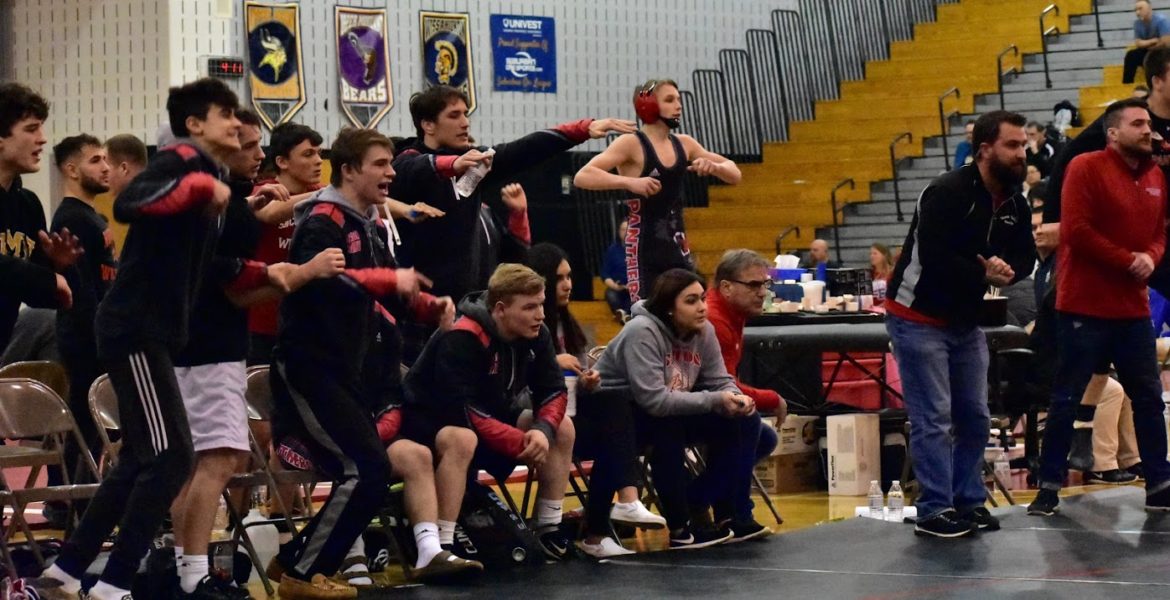 The Panthers encouraging teammate Ermal Duka to desperately hold on for the championship clinching victory.

Although irrelevant in terms of the team outcome, the Rams and Panthers split the final two bouts with each adding a pin to their side of the scoreboard. Central Dauphin’s Matt Repos (113) and Saucon Valley’s Travis Riefenstahl (120) each earned a smack-of-the-mat for their team.  At the final buzzer, the Saucon Valley Panthers earned themselves a hard- fought and character-building 43-30 victory over the Central Dauphin Rams.

“We really didn’t say too much to the team before the match.  I believe most of our wrestlers understood what was at stake in the match.  When you are wrestling a team like Central Dauphin that has a rich tradition of wrestling and is ranked as one of the top-12 AAA teams in the state, you know you have to bring everything you have and every point matters.  It was great to see some of our younger kids experience a dual meet like that and come through when it matters most.  We are super-proud of the team and their efforts this weekend, but we need to regroup next week and continue looking for ways to improve and get better!”

Panther Wrestler of the Day:  The Team! 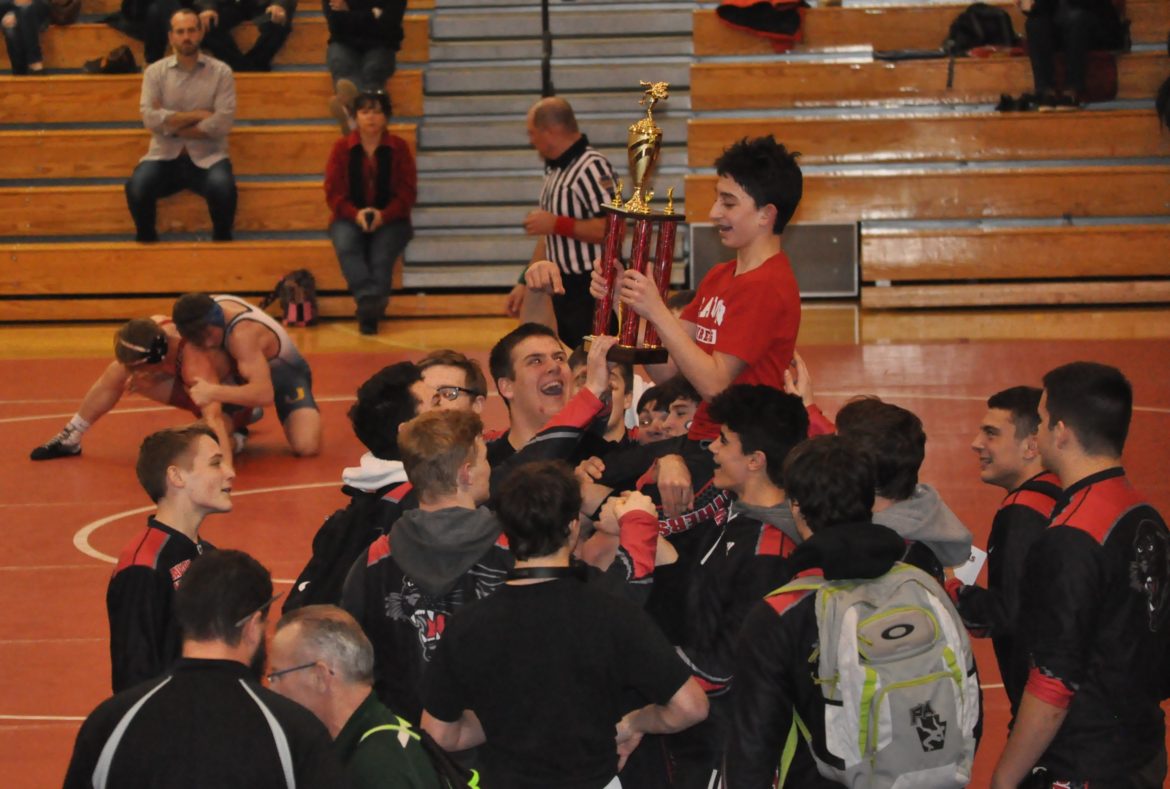 It took a total team effort for the Panthers to repeat as ‘Big Red’ champions.

“After a long day of wrestling it is very difficult to pick out one individual, because this past weekend represented everything we are trying to build here at Saucon Valley.  We had wrestlers like, (Kevin) Dyer and (Nick) Bortz step into the line-up to help the team out.  We had some of our more experienced kids get much needed bonus points in some highly contested matches.  It was a very good day overall for the team and I am proud of their efforts.”

Up Next:  The Panthers get back to Colonial League wrestling action this week when they return home to butt heads with the Palmerton Blue Bombers on Wednesday night.  Wednesday night will also mark the Panthers annual “Teacher Appreciation Night” where each varsity starter honors one of their teachers who will sit in the wrestler’s corner during their respective bout.  Wrestling action is scheduled to start at 7 p.m. 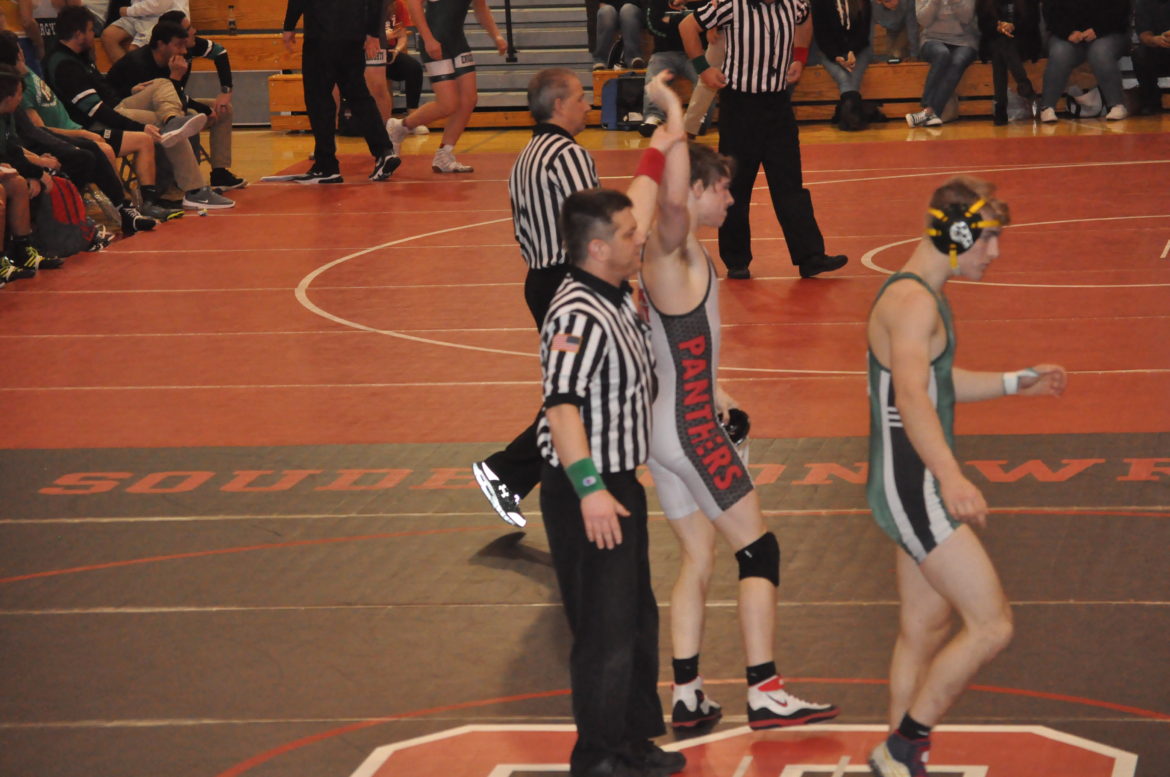 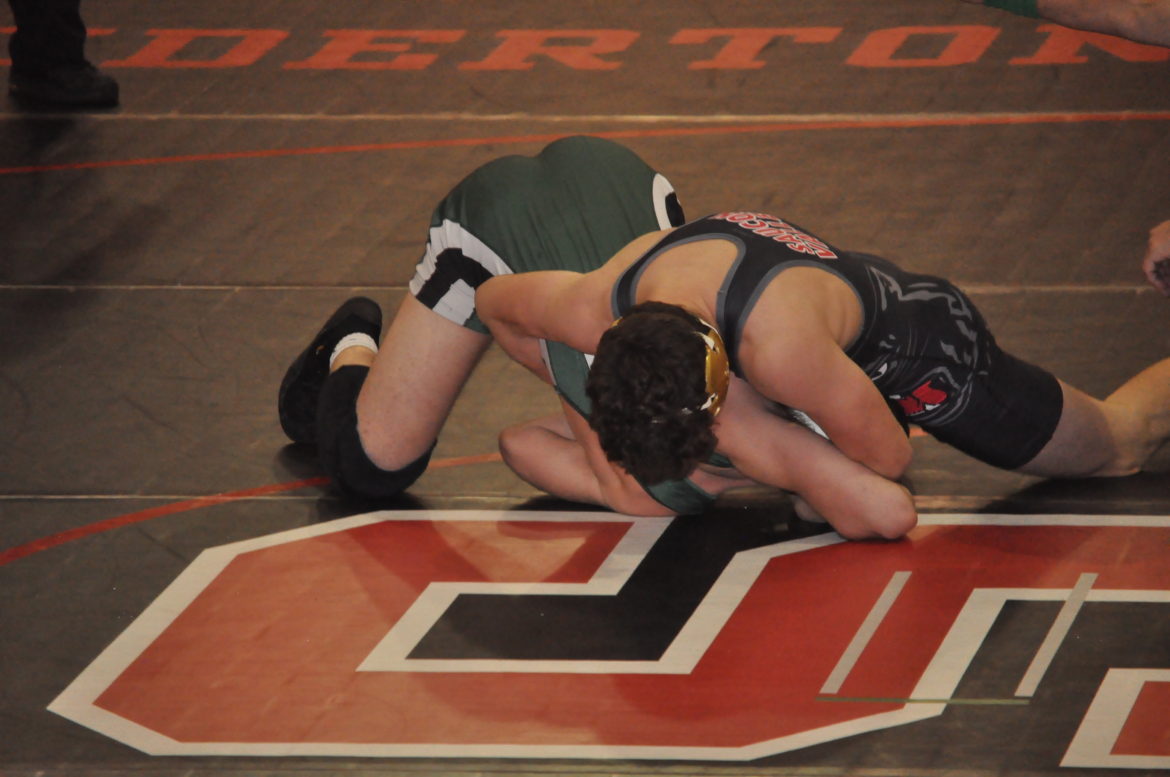 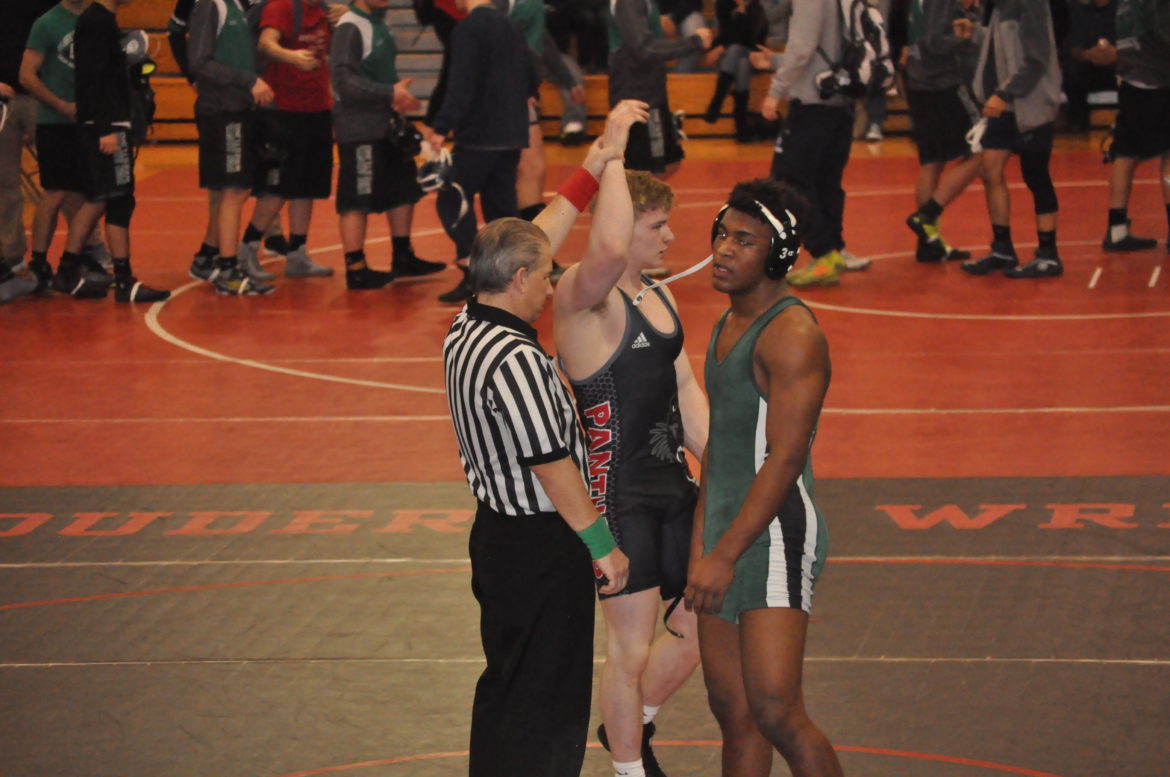 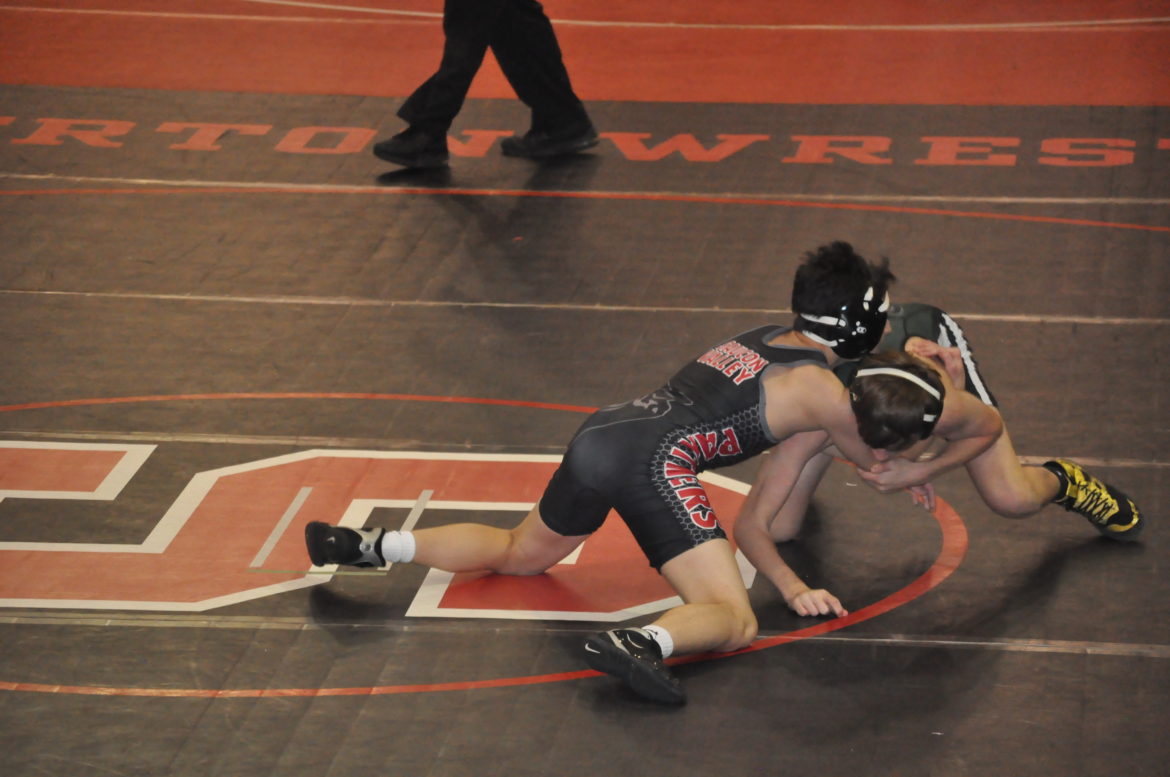 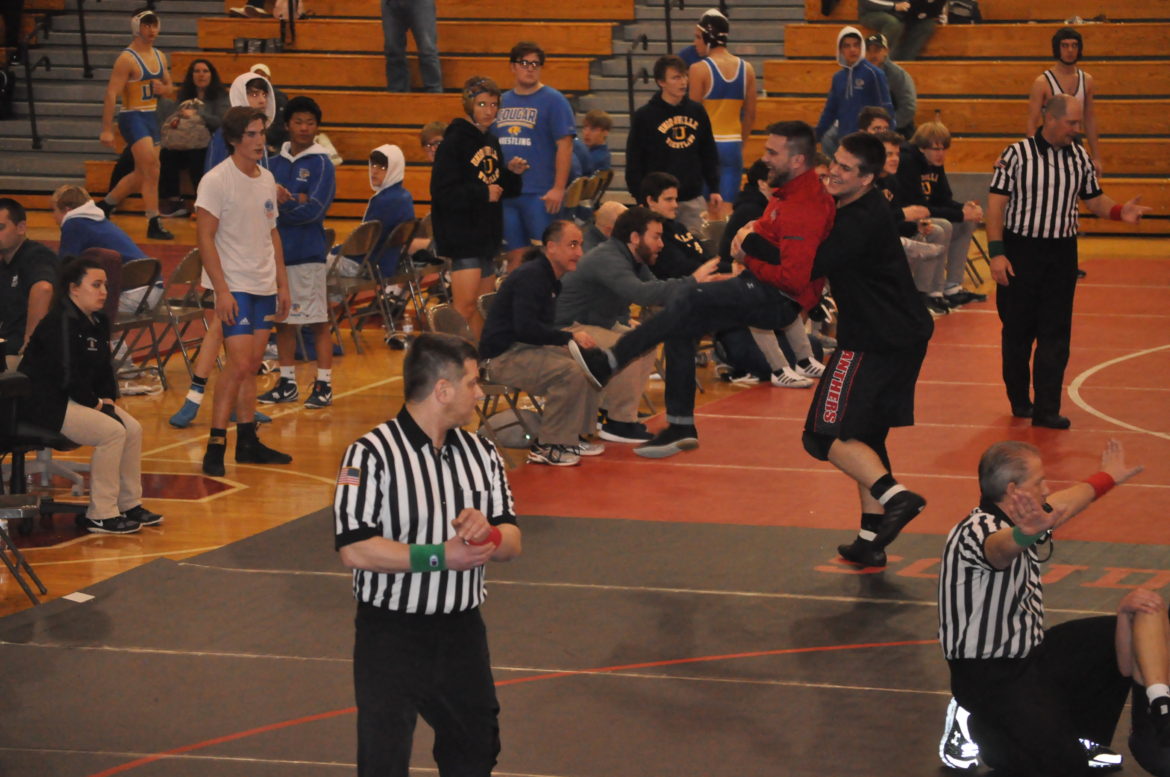 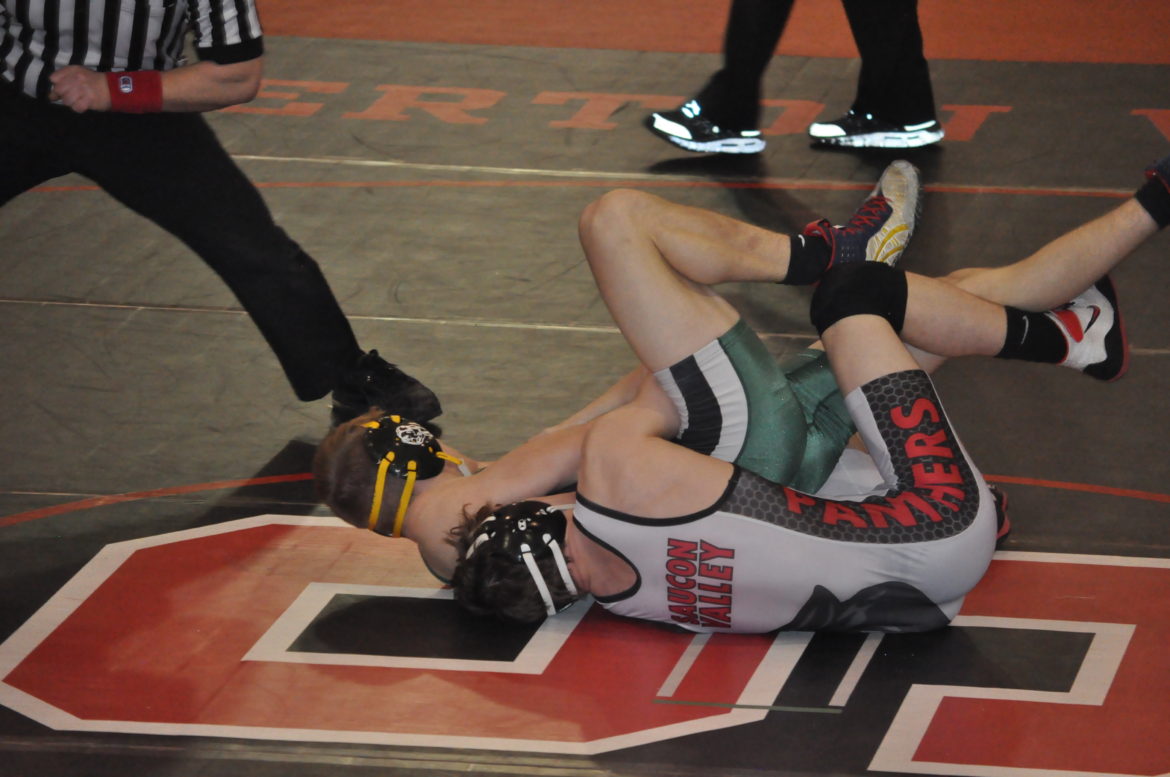 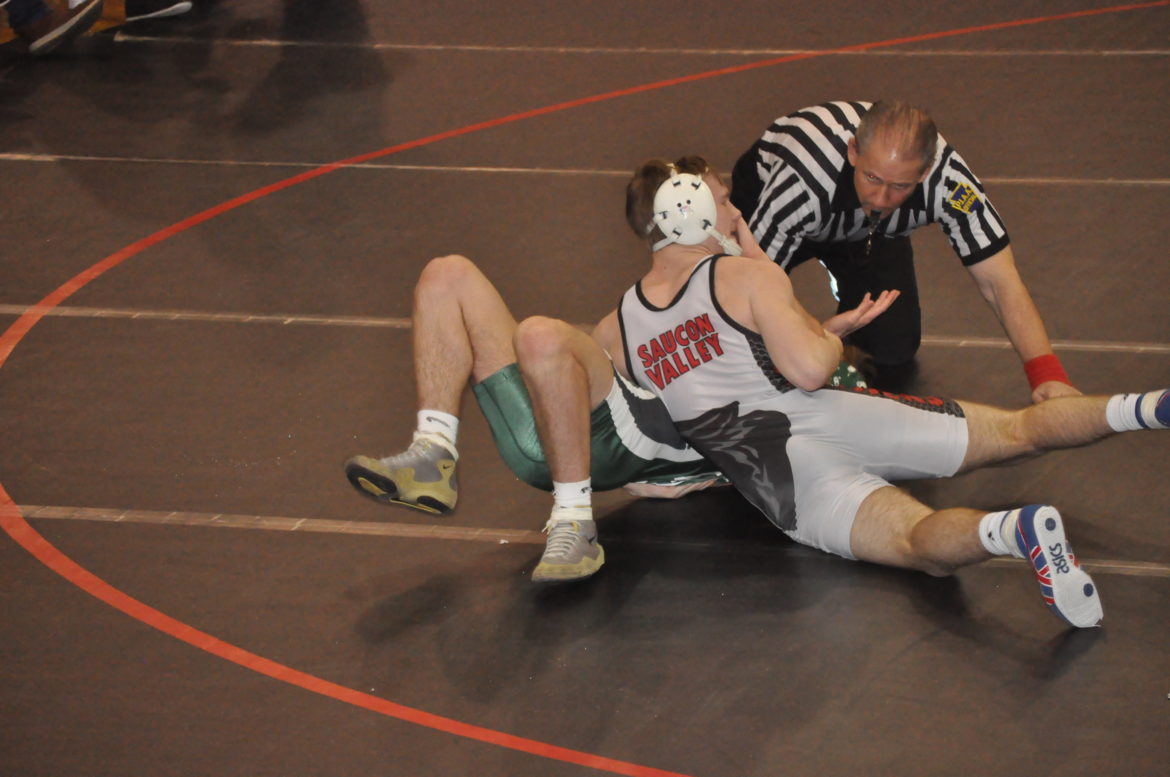 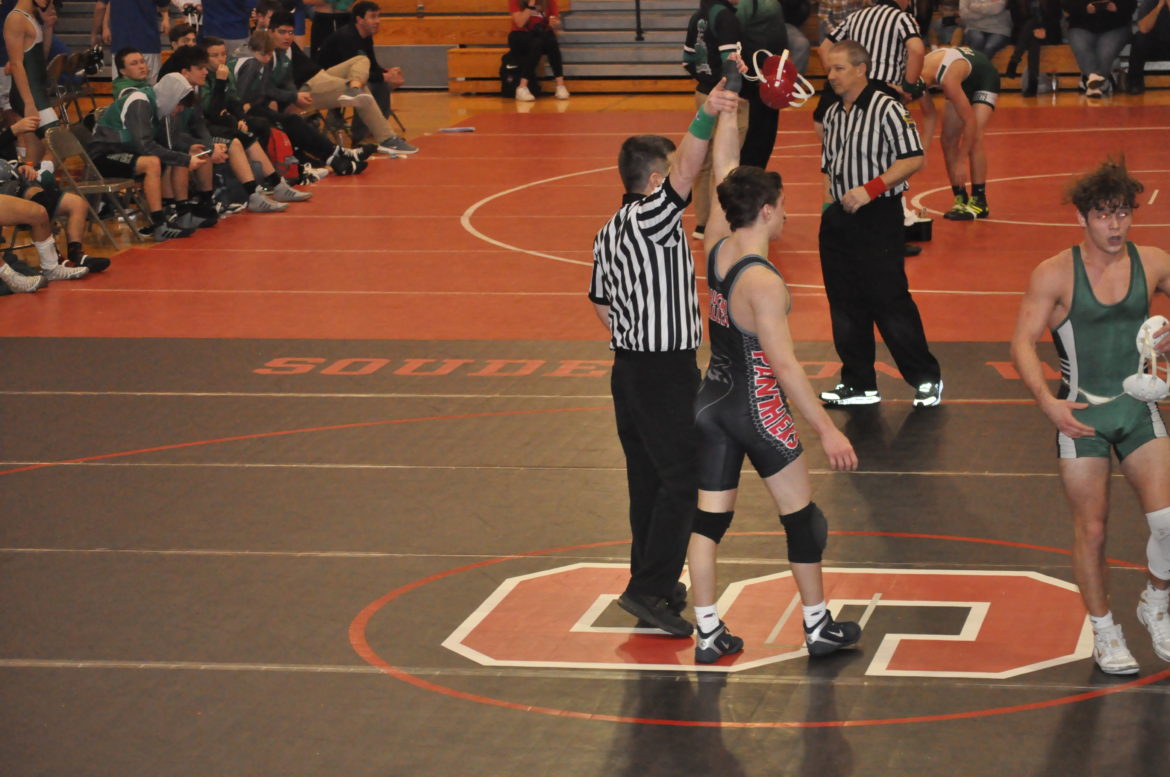 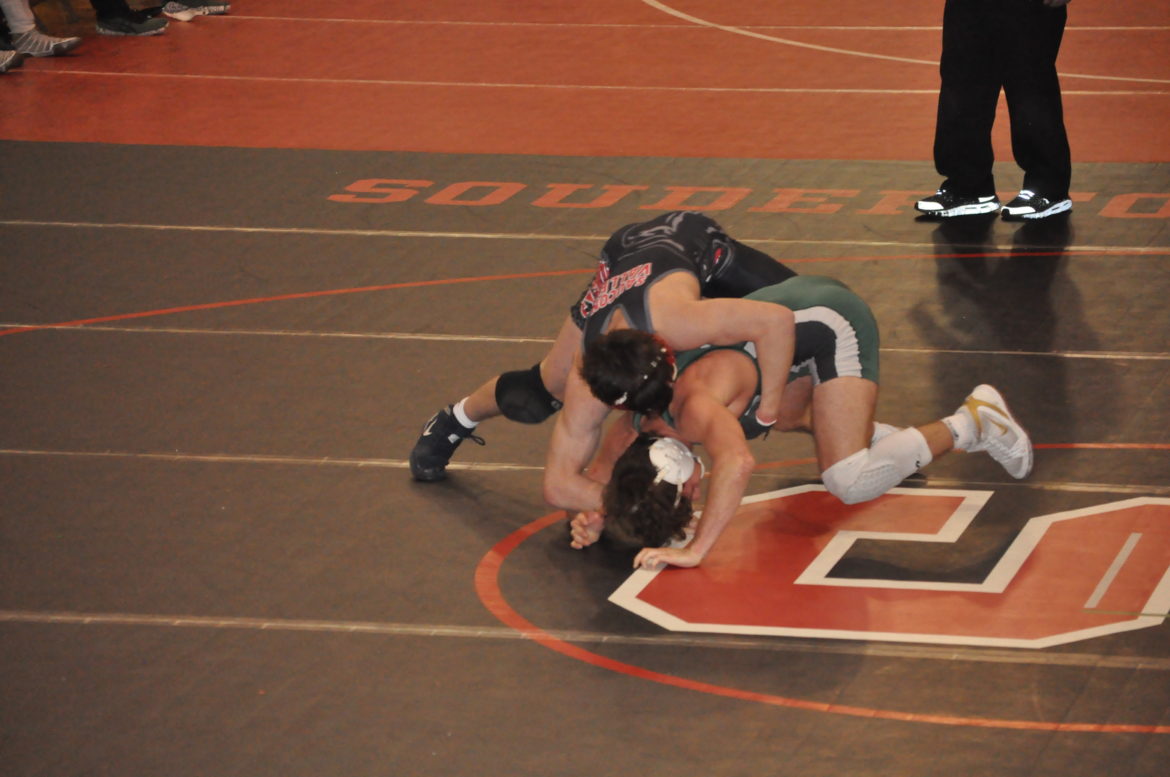 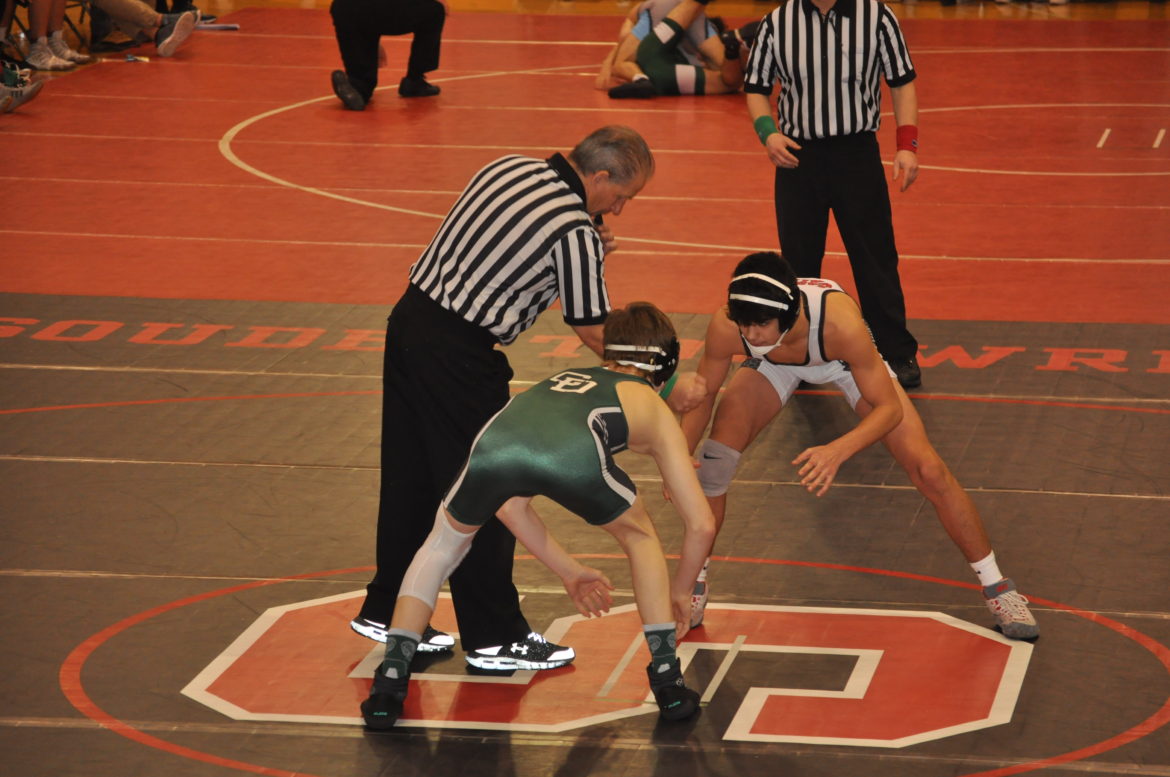