In the latest round of state gaming grants both Hellertown borough and Lower Saucon Township are officially winners.

State Sen. Lisa Boscola (D-18), who represents both municipalities, announced last week that Hellertown borough will receive $100,000 toward Phase 1A of the construction of a proposed public works facility, and Lower Saucon Township will receive $50,000 to pay a window restoration project at the historic Heller Homestead’s Widow’s House.

“I’m pleased to announce the approval of these state funds allocated to help expedite important projects that will improve the quality of life and increase community safety,” Boscola said in a news release about the grants. “I will continue to seek state funding and resources for local efforts aimed at making our community a better place to live and work. All of these grants will help fund and advance worthwhile local projects.”

The money for the grants is from the Monroe County Local Share Account (LSA), which was established by the Pennsylvania Race Horse Development and Gaming Act. The funds in the account are generated by the state’s gaming facilities and may be used for economic development, community development and public interest projects in Monroe and its contiguous counties, which include Northampton County.

Other projects awarded grants in this round of funding are:

The Hellertown Public Works facility is proposed for construction on the site of the former Reinhard School building at Northampton Street and Magnolia Road, which is currently a vacant lot. 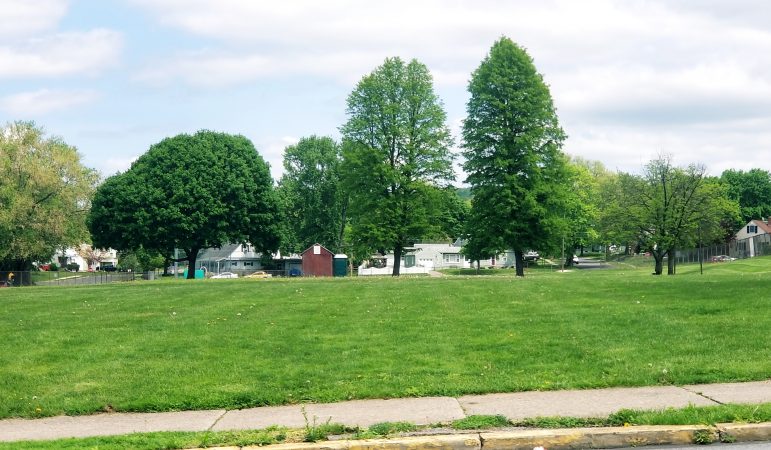 The Reinhard field at Northampton Street and Magnolia Road is the location Hellertown borough officials have said they believe is the best choice for a proposed public works facility. A $100,000 state gaming grant the borough was awarded last week will help bring the project closer to fruition. (FILE PHOTO)

Although there has been opposition to the project from some nearby residents, borough council has cited financial obstacles involved with considering other potential sites.

The borough already owns the deed-restricted Reinhard lot, which it acquired nearly 20 years ago for $1 under an agreement with the Saucon Valley School District that stipulated it could only ever be used for municipal purposes. If it isn’t, ownership of the property could revert to the school district, at least in theory.

The property is located within the borough’s R2 zoning district, which means as many as 40 townhomes could be built on it if it were sold to a developer, although at a meeting last fall council president Tom Rieger said that scenario is unlikely ever to occur.

Citing the need for additional tax revenue, council last week approved rezoning a piece of private property on Easton Road from R-1 to R-2, which means townhomes could be built on it if other requirements are met.

Since last year several community meetings have been held by council in an effort to assuage the concerns of the residents near the Reinhard lot, who have said they believe increased traffic and noise from the facility will detract from their neighborhood, devalue their properties and negatively impact their quality of life.

However, not everyone has been convinced that the facility will have “minimal impact,” as Rieger promised it will at a roundtable meeting in September.

“If our home’s value is damaged we’ll be taking the borough and the state to court,” promised project opponent and vocal neighborhood organizer Bill Broun Monday.

Broun also criticized the roundtable meetings council has held in order to discuss the project and hear concerns about it from residents.

“Residents didn’t want to be part of an operation aimed at convincing Lisa Boscola’s office that the neighborhood approved of the roundtable,” he said. “It seemed like a choreographed set-up.'”

The fate of the public works project will ultimately hinge on grant awards, since the borough does not have the money to build the facility without grants.

Officials say the current public works garage is undersized, antiquated and sorely in need of replacement with a modern structure.

If and when the public works department is relocated to a new home, the garage will become part of the Hellertown Police Department, which also suffers from a critical space shortage, officials have said. 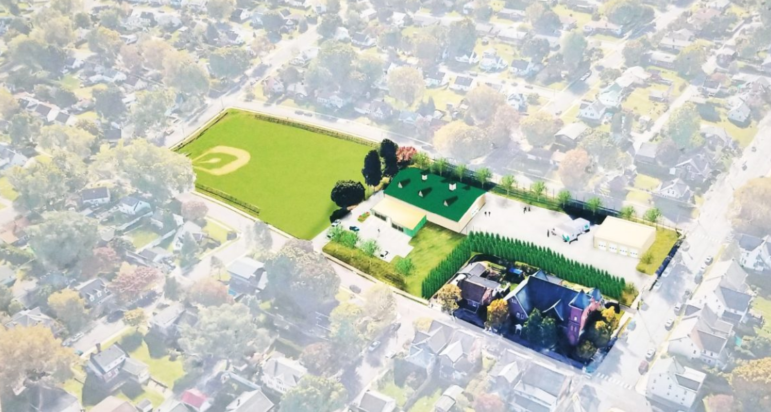 An aerial view of an artist’s rendering of the proposed Hellertown public works facility shows how it would be laid out on a lot that is currently vacant. The Saucon Valley Community Center and Northampton Street are in the lower right corner of the image.