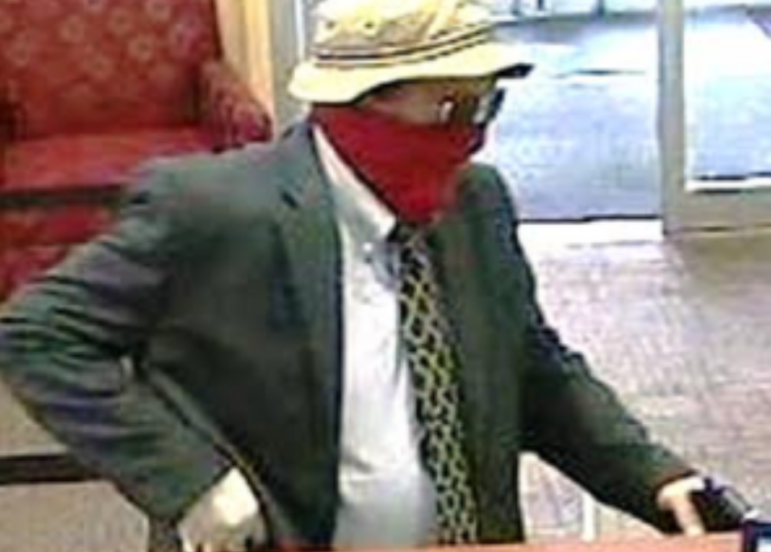 Sixty-year-old Richard Boyle’s bank-robbing days are over, according to authorities, who predict that the serial bank robber from Plumstead Township, Bucks County, will die in prison.

The Plumstead Township, Bucks County, man who became known as the “Straw Hat Bandit” after a series of bank robberies was sentenced to 71 years in federal prison on Wednesday.

Richard Boyle, 60, was sentenced by U.S. District Court Judge Gene E.K. Pratter to the lengthy prison term, five years supervised release and $495,000 restitution, according to the U.S Department of Justice.

Boyle, who pleaded guilty last year, dropped his attorney in January and represented himself in court on Wednesday, according to federal records.

The 11-robbery spree took place between 2012 and 2016 across southeastern Pennsylvania and netted Boyle $495,686 in stolen cash.

Boyle became known to the public as the “Straw Hat Bandit” during it due to the fact he often held bank employees at gunpoint while wearing disguises, including a straw hat.

As part of an earlier multi-county bank robbery spree he committed, on Sept. 6, 2007 Boyle robbed the then-KNBT bank at 741 Main Street in Hellertown, which today is a BB&T branch.

When he was sentenced for committing those robberies in 2008, Boyle’s attorney reportedly blamed the crime on his client’s alleged financial problems and mental illness.

The Morning Call reported in 2008 that Bucks County Judge Jeffrey L. Finley showed leniency toward Boyle–who faced up to 160 years for his 2007-2008 spree–in sentencing him because he hadn’t used a gun to commit his crimes. However, the newspaper noted that a teller Boyle robbed who was eight months pregnant at the time had to be medically evaluated after the robbery to make sure she and the baby she was carrying were alright.

In the “Straw Hat Bandit” spree authorities say Boyle made off with large sums of money greater than what is stolen in a typical bank robbery, often getting away with tens of thousands of dollars at a time.

The robberies were carefully planned and Boyle used disguises, gloves and even bleach, which he spread on the floor of the banks to conceal his DNA.

Boyle also called 9-1-1 to report nonexistent emergencies to slow the police response to the banks he robbed. The fake emergencies he called in included a country club bomb threat, a gunman on the loose at Temple University and a planned attack at a mall.

With an FAA license in hand, Boyle used his Doylestown-based drone photography business, Sky Eye View, to launder the stolen funds. Federal authorities say he then used the business’ Square merchant payment account to process some of the stolen funds, although the business in reality earned “very little revenue” and “no profits.”

“The days of the ‘Straw Hat Bandit’ terrorizing the Philadelphia suburbs are over,” said U.S. Attorney William McSwain. “He will no longer be stealing, playing games with the police, or putting innocent lives at risk. Instead, he will be spending the rest of his life in prison–something that he richly deserves.”

“Richard Boyle served time in prison for a prior string of bank robberies,” said Tara McMahon, acting special agent in charge of the FBI’s Philadelphia field office. “Once out, he not only picked up where he’d left off, he escalated his crimes–carefully plotting diversions and disguises, and arming himself with a gun. For terrorizing the employees of nearly a dozen banks and putting people’s lives at risk, he’s back behind bars, and this lengthy sentence ensures the so-called ‘Straw Hat Bandit’ won’t ride again anytime soon.”

According to a sentencing memorandum, Boyle described growing up in a “chaotic and traumatic” household where he was physically abused by his father, causing him to run away several times. He joined the Navy as a young man and was discharged for mental health reasons. Later, he worked as a surgical assistant at hospitals in south Florida.

Boyle has two sons and two daughters. While in the federal detention center, Boyle was only visited by his daughters.

Federal authorities arrested Boyle was in April 2017 after a years-long investigation that involved numerous agencies.

Note: This story was originally published on NewtownPANow.com. It is adapted and republished here with permission.