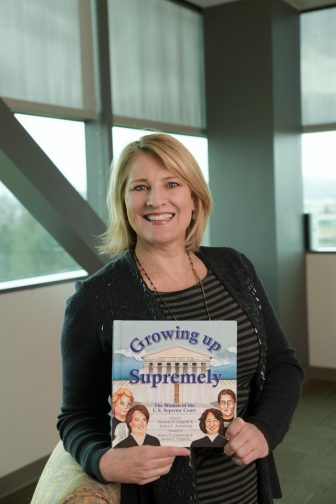 As a child, Jessica Armstrong’s love of reading, writing and public speaking took her to law school and later to St. Luke’s University Health Network, where she serves as associate general counsel.

Now, those interests have led her to a new opportunity: children’s book author.

The 32-page book is based on a scholarly book called “The Rhetoric of Supreme Court Women,” which was written by Armstrong’s co-author, Nichola D. Gutgold, PhD., a published author, speaker and communications professor at Penn State University.

Armstrong and Gutgold debuted “Growing Up Supremely” on Friday at Swain School in Salisbury Township. The co-authors held two sessions for students: 1:30 to 2 p.m. for grades K-4 and 2:30 to 3 p.m. for grades 5-8.

A book launch party was also held at the school.

“Growing up Supremely” aims to teach children ages 6 to 12 about the four women–Sandra Day O’Connor, Elena Kagan, Ruth Bader Ginsburg and Sonia Sotomayor–who have been appointed to the U.S. Supreme Court.

The book delves into the young lives of the four justices and looks at the obstacles they overcame in being appointed to the nation’s highest court.

“We want to help young readers see the qualities of the first four women who have served as Supreme Court justices in a way that will motivate them to think big, read more and become the adults they want to be,” said Armstrong, who lives in Allentown with her 17-year-old daughter, Keeler.

She pointed to Sandra Day O’Connor, the first woman appointed to the Supreme Court, as an example.

“She graduated at the top of her class, but she couldn’t find a job,” Armstrong said. “No law firm would hire her because she was a woman.”

A gymnast in her youth at Parkettes in Allentown, she won a full scholarship to Stanford University. She then went to University of San Francisco School of Law and practiced law in California.

Armstrong returned to the Lehigh Valley in 1996 and later joined St. Luke’s legal team, helping the network achieve its mission of providing a continuum of quality care.

“I love practicing law for St. Luke’s because I feel like I’m doing meaningful work in helping people,” she said.

Armstrong met Gutgold through a book club they belong to.

Gutgold has written other works about trailblazing women.

When Gutgold asked Armstrong if she wanted to help write “Growing Up Supremely,” Armstrong jumped at the chance.

Making the experience even better was the fact that her mother, Karen Armstrong, was a co-illustrator. “It was a family affair working on this book. It was really fun,” she said.