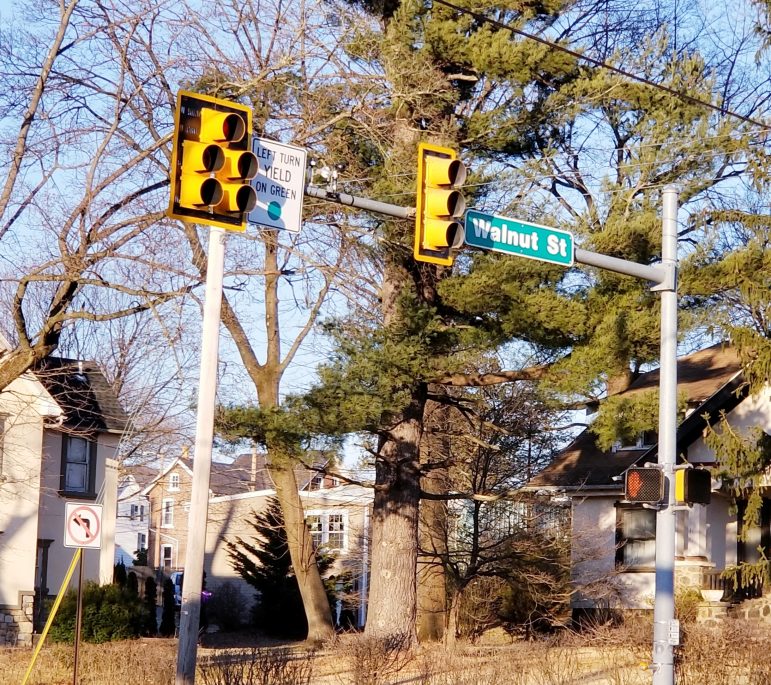 A left turn arrow for northbound traffic at Walnut and Main streets in Hellertown borough was installed Feb. 27.

Going left? If you’re northbound at the intersection of Main and Walnut streets in Hellertown turning left–or west–just got easier, thanks to the installation of a left turn arrow last week.

Installation of the lit arrow was made possible by a PennDOT traffic study conducted in October, which determined that the criteria for it were met for traffic in that direction.

The other three sides of the intersection did not meet the criteria for a left turn arrow, the study found.

A study of the light at Main and Water streets also failed to produce data that would have allowed for the installation of a left turn arrow on one or more sides of the traffic light there, which some residents have said they find remarkable.

Since Main Street (Rt. 412) in Hellertown borough is a state road, PennDOT has control over it and must approve changes to it.

The arrow is the first to be installed at a traffic light wholly within the borough. Several traffic lights located at the north end of Hellertown have arrows that facilitate turns in one or more directions, but they are all located partly within Bethlehem city limits.

Discussions about the possible need for left turn arrows at Walnut Street were prompted by the Water Street Bridge replacement project–which took place last summer–and fears of traffic backups at the light due to the detour around the closed bridge.

Ultimately those problems never materialized, however the borough went ahead with the study, which was conducted on a weekday during the school year in order to generate traffic data typical for the intersection.

Although PennDOT conducted the study, the borough was responsible for paying for the left turn arrow, which cost nearly $10,000 to install.

That expenditure was approved by borough council last month.