If you have any outdoor activities planned for Thursday and Friday, you may need to consider postponing them. The National Weather Service says our area can expect to receive up to several inches of rain, which is why a flood watch has been issued for much of Pennsylvania, New Jersey, Delaware and Maryland.

In an advisory statement released Wednesday, the NWS said that the rain will begin later in the day on Thursday.

“Periods of heavy rain will begin over western portions of the area Thursday afternoon, with the threat of heavy rainfall progressing eastward Thursday evening into the overnight hours,” it said. “Rainfall will decrease in intensity Friday morning, but impacts from the earlier heavier rainfall may linger into the day on Friday. Rainfall amounts will generally range from 1.5 to 2.5 inches over the watch area, however locally higher amounts will be possible, particularly over the higher terrain of eastern Pennsylvania and northwest New Jersey.”

Poor drainage and low-lying areas could begin to experience flooding late Thursday, and flooding along small streams and larger waterways is possible Thursday night and Friday.

A flood watch means there is the potential for flooding based on current forecasts. Residents should monitor forecasts and be alert for possible flood warnings. Those living in areas prone to flooding should be prepared to take action should flooding develop.

In general the weather pattern for the weekend is expected to be unsettled, with intermittent showers. However temperatures are forecast to be mild.

The Saucon Valley Farmers’ Market is scheduled to open for its 15th season on Sunday, and although there is a slight chance of showers according to the latest National Weather Service forecast, partly sunny skies can be expected during much of the day. The high temperature Sunday is expected to be “spring-like,” in the low 70s. 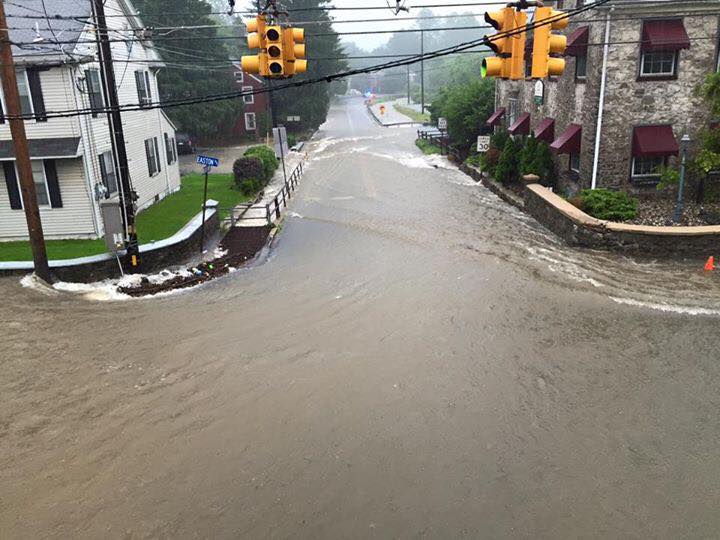 Flooding at the intersection of Willow Park Road and Easton Avenue in Bethlehem Township is seen from the second floor of the Keystone Pub in this June 2015 file photo.