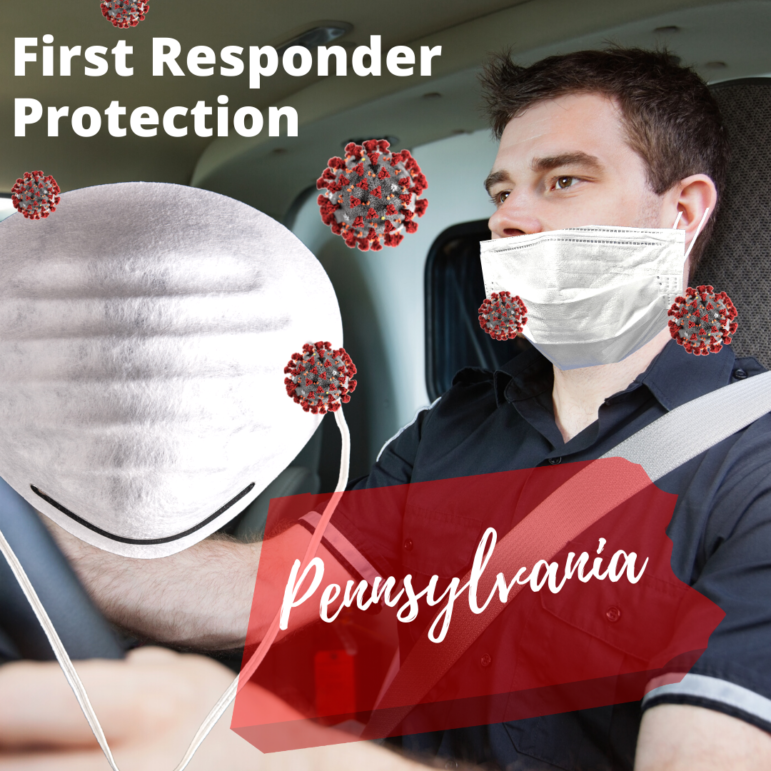 Pennsylvania’s first responders including police, firefighters and EMTs are especially vulnerable to COVID-19 as frontline essential workers. A state Senate bill passed Wednesday would allow them to do their job more safely by improving their access to information about potential cases of the disease. As of April 30 COVID-19 had killed nearly 2,300 Pennsylvanians.

With the potential for first responders to come in contact with individuals infected with COVID-19 while at work in the field, keeping them safe is a high priority. A bill passed by the Pennsylvania State Senate Wednesday seeks to strengthen protocols already in place by providing them information about communicable diseases they may encounter in a disaster like the ongoing coronavirus pandemic.

Currently, when first responders are dispatched to a call at a location where someone potentially has COVID-19, they will only know that if the person who called and asked for a response volunteered the information to an emergency dispatcher.

Noting that the bill overwhelmingly passed the Senate by a vote of 47-3, Boscola said it would require that during health-related disaster declarations, such as COVID-19, 911 communication centers, police, fire and other first responders receive a notification when a documented communicable disease related to that health declaration is reported in their municipality within 24 hours of receiving the information.

The bill would also require healthcare providers and nursing home administrators to report cases of communicable diseases related to an emergency health declaration to a local health board or to the state Department of Health. The local agencies that received the notification would be required to keep the information confidential, Boscola’s news release said.

Senate Bill 1110 now goes to the state House of Representatives for consideration.

Meanwhile, the daily number of confirmed cases of COVID-19 in Pennsylvania is again on the rise, after a decline earlier this week that culminated in the lowest daily reported total since April 1.

Pennsylvania Department of Health officials announced 1,397 new cases of COVID-19 Thursday, which brought the total number of confirmed cases in the state to 45,763.

The health department also announced 97 additional deaths, bringing the official death toll from the pandemic in Pennsylvania to 2,292.

According to the state, more than 165 Lehigh Valley residents have died from COVID-19, including 74 in Lehigh County and 94 in Northampton County.

Many of the deaths have occurred in nursing homes, including the Northampton County-owned Gracedale facility, where more than 100 residents and employees have been infected by the virus and the National Guard was deployed this week to help cover staffing shortages.

Nearly 5,000 Lehigh Valley residents have tested positive for COVID-19 since the pandemic began: approximately 2,800 in Lehigh County and 2,050 in Northampton County as of Thursday.

The state has increased its testing capacity however the number of people being tested for the virus on average is considerably lower than in adjacent hard-hit states like New Jersey and New York. According to the coronavirus tracking site Worldometer, Pennsylvania the testing rate as of Thursday was approximately 17,300 tests conducted per one million residents, while in New Jersey it was approximately 27,800/million and in New York it was approximately 45,900/million.

State officials including Gov. Tom Wolf and health secretary Dr. Rachel Levine have acknowledged that Pennsylvania’s testing needs to increase for a phased reopening of the state that is set to soon begin with north central and northwestern counties to occur.

All of Pennsylvania remains under a stay-at-home order until May 8, and Wolf is expected to announce additional information concerning the details of his Plan to Reopen Pennsylvania in a news conference that will be held Friday afternoon.

Construction work and activities such as golf, boating and camping will also begin Friday.