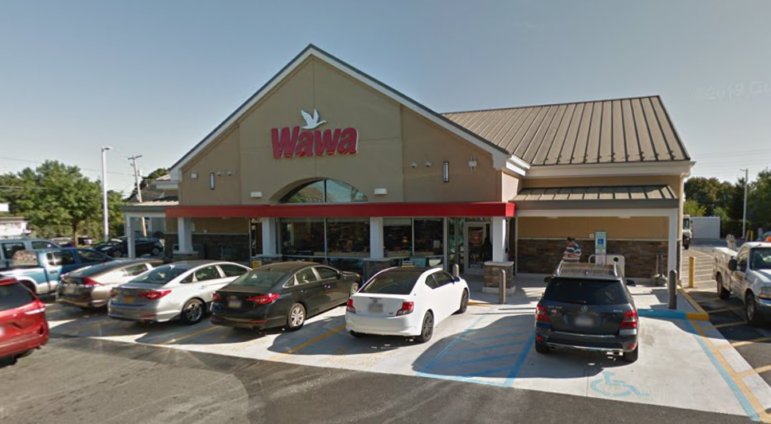 State police say a 25-year-old clerk who works in the Wawa at 4900 Hamilton Blvd., Wescosville, was threatened by a customer when he asked the man to put his face mask back on.

Pennsylvania State Police at Fogelsville said Wednesday they hope to identify a man who allegedly threatened a 25-year-old clerk in the Wawa at 4900 Hamilton Boulevard in Lower Macungie Township after the clerk asked him to put his face mask back on.

In a news release, police said the incident occurred Sunday at around 3:45 a.m., after the man entered the store accompanied by a woman who is not a suspect in the case.

Face masks are required to be worn when entering businesses such as convenience stores in Pennsylvania during the coronavirus pandemic; the result of a Department of Health order that took effect statewide on April 19.

“While in the store the suspect took his face mask off while shopping,” police said. “When the suspect came to (the) front register to pay for his items, a Wawa employee asked the suspect to put his mask on.”

Police said the man complied with the request but while putting his mask back on “allegedly said the employee was being impatient, called him numerous names of an inappropriate nature and made a reference to leaving the store to go home, coming back with an ‘AK’ and seeing how he asks him to put his mask back on.”

According to the news release, the man then left the store with the woman in a new model silver Chevrolet Equinox SUV and turned onto Brookside Road.

Police said the incident was reported to them about two-and-a-half hours after it occurred, and that “the suspect did not return to the store during this time period or at any time during the day.”

Police described the suspect as black with a beard and said he was wearing a backwards red New York Yankees baseball cap, a grey sweatshirt with a swordfish logo on the front and the word “Atlantic” on the back, grey sweatpants and white sneakers at the time.

The case is being investigated as a simple assault involving an attempt by physical menace to put another in fear of imminent serious bodily injury, police said.

In several other recent cases, requests by stores for individuals to comply with the state’s face mask order have led to disturbances that resulted in charges being filed by police.

In at least one other case, police have apparently been unable to identify an alleged shoplifter because he was wearing a face mask inside a Lowe’s.

Individuals with a medical condition that prevents them from wearing a face mask do not have to wear them inside businesses and don’t need to provide proof of a medical condition, under the current order from the Pennsylvania Department of Health.