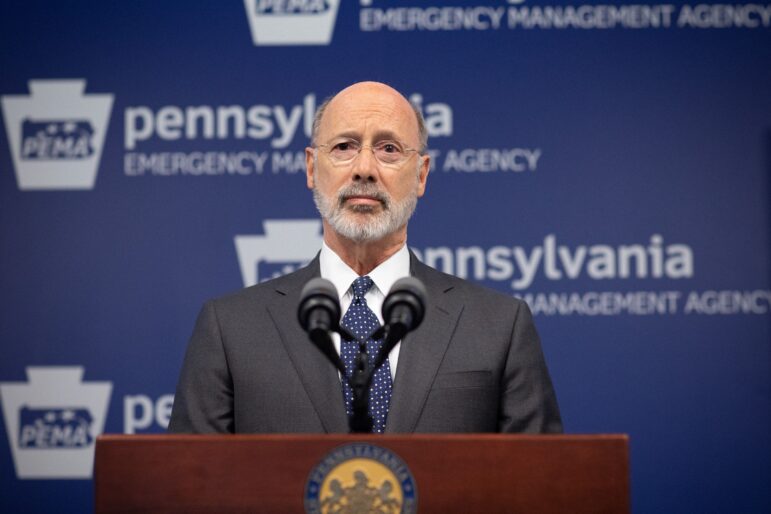 HARRISBURG — What was once considered a nuclear option detonated in the Pennsylvania legislature this week, as Republican lawmakers—and a handful of Democrats—gave final approval to a resolution terminating Gov. Tom Wolf’s coronavirus emergency declaration.

The outcome of the apparently unprecedented move is still unclear, but the next step is a legal battle.

Top Democrats have repeatedly said the state Constitution grants Wolf the power to reject such a measure, which the governor said in a letter to lawmakers would have “disastrous” consequences should it take effect.

Republicans, meanwhile, said state law requires Wolf to end his declaration now that a majority of lawmakers have approved the resolution.

A spokesperson for Wolf originally said he would disapprove the resolution once it reached his desk. But according to Gregory Schwab, general counsel for the administration, Republicans don’t plan on presenting the resolution to Wolf at all.

The governor and Schwab on Wednesday told reporters they see no other path but to take the issue to court.

“In order to bring an end to the chaos and the confusion that has been created around the public messaging related to the concurrent resolution, there doesn’t seem to be any other option than to try to get a quick resolution from the court,” Schwab said.

But even as Wolf was speaking, Senate Republicans were taking legal action of their own. The caucus filed a lawsuit in Commonwealth Court to compel the governor to comply with the resolution and terminate the declaration.

His failure to do so is “unlawful, unreasonable and without just cause,” attorneys for the caucus said in the filing.

Wolf on Wednesday said ending the declaration would rescind protections enacted in response to the pandemic and the subsequent economic freefall, including the suspension of licensing requirements for health-care workers and a temporary moratorium on evictions and foreclosures.

But what the resolution would not do, according to Wolf, is reopen businesses that are currently not allowed to operate under the state’s closure order.

“Ending the disaster declaration would not reopen anything. It just wouldn’t,” Wolf said. “And anybody who says differently is wrong.”

In March, Wolf and Health Secretary Rachel Levine ordered the closure of all businesses except those deemed “life-sustaining.” Those restrictions have been at least partially lifted in every county across the state.

But from the beginning, Republicans decried the closure order as unfair to small businesses and confusing.

They also criticized a Wolf administration program that allowed shuttered businesses to apply for waivers to reopen, saying the process was secretive and seemingly arbitrary. Senate Republicans last month took court action after the governor failed to comply with a subpoena for documents related to the waiver process. That case is still pending.

As Wolf urged caution and a measured approach to reopening, the GOP-controlled House and Senate passed several bills to restart certain sectors of the economy, which were all met with the governor’s veto pen.

These tensions came to a head Tuesday as Republicans and some Democrats in both chambers gave final approval to Diamond’s resolution. Senate Republicans claimed the vote “would end the executive order Wolf used to shut down businesses.”

But according to Schwab, Wolf’s general counsel, the state’s public health laws–not just the emergency declaration–give Levine “additional and separate authority” cited in the reopening and closure orders.

It was not immediately clear when the Wolf administration would file legal action or how long it would take the courts to resolve the question.

Democrats and some legal scholars have pointed to a section of the Pennsylvania Constitution that gives Wolf the power to approve or disapprove “every order, resolution or vote,” except on the question of adjournment, before it goes into effect.

But Republicans say a single word in state law — “shall” — doesn’t give Wolf a say in the matter.

“The governor will be statutorily required to issue an order terminating the declaration,” Senate lawyer Crystal Clark said Tuesday. “He has no discretion in this matter.”

Schwab declined Wednesday to go into further details about the administration’s legal strategy, though Wolf seemed confident that the Constitution gives him the ability to reject the resolution.

“Maybe unbeknownst to me somewhere embedded in the Constitution is the right of one branch to arbitrarily decide to do something that is at odds with the Constitution,” Wolf said. “I just don’t know where that is. I think the proper thing to do, and the careful thing to do, is to go to the courts and say, ‘How can this happen?’”