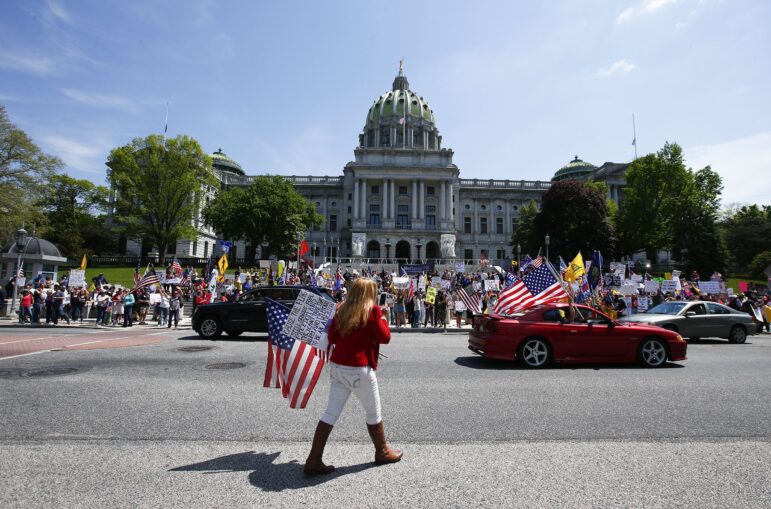 Harrisburg in Dauphin County, was the site of a Reopen PA protest (pictured) at the state Capitol in May. On June 19, the county will move from the yellow to the green phase of the state’s coronavirus reopening plan.

Wolf on Friday announced that Dauphin, Franklin, Huntingdon, Luzerne, Monroe, Perry, Pike and Schuylkill counties will be allowed to ease most coronavirus restrictions on June 19. They will join 46 other counties that are already in the green phase, which lifts most restrictions on businesses and residents.

Together, that represents nearly 50 percent of Pennsylvania’s population—6.2 million people.

“In Pennsylvania, not only did we flatten the curve, but we are continuing to keep case counts down even as we open our commonwealth,” Wolf said in a statement. “We will continue to take a measured, phased approach to reopening that relies on science and health experts.”

Thirteen counties will remain in the “yellow” phase, which lifts the most aggressive mitigation measures but still requires residents to limit the size of gatherings and keeps businesses like gyms and salons closed. This includes some of the state’s most populous counties, including Philadelphia and its suburbs as well as Lancaster, Lehigh and Northampton counties.

In March, Wolf issued a disaster declaration, closed all but “life-sustaining” businesses and incrementally put counties under stay-at-home orders to prevent COVID-19 from overwhelming hospitals. He began gradually loosening restrictions in early May.

From the start, Republicans criticized the business closure order and a process that allowed companies to apply to the Wolf administration for a waiver to reopen, calling it random and secretive.

That anger bubbled over this week, as the legislature took an unprecedented step and gave final approval to a resolution to end Wolf’s disaster declaration, which he first signed on March 6 and renewed June 3.

A spokesperson for Wolf said he would reject the resolution once it reached his desk, a power the administration said is given to the governor by the Constitution.

The GOP sees things differently, however.

Republican leaders have pointed to a section of state law they say compels Wolf to end his emergency declaration once lawmakers in both the House and Senate pass a resolution.

Now, both parties see no other way to resolve the dispute but through the courts.

The Senate filed a lawsuit in Commonwealth Court this week to compel Wolf to end his order and requested an expedited resolution, which the court granted Friday.

On Wednesday, Wolf said ending the declaration would rescind protections enacted in response to the pandemic and the subsequent economic freefall, including the suspension of licensing requirements for health-care workers and a temporary moratorium on evictions and foreclosures.

“Should this attempt at unilateral legislative action succeed, it would have very real-world consequences and inhibit the commonwealth’s ability to protect the health and lives of its citizens,” Wolf’s counsel wrote in the court filing.