Spotlight PA is an independent, non-partisan newsroom powered by The Philadelphia Inquirer in partnership with PennLIVE/The Patriot-News, Triblive/Pittsburgh Tribune-Review, and WITF Public Media. Sign up for our free weekly newsletter. 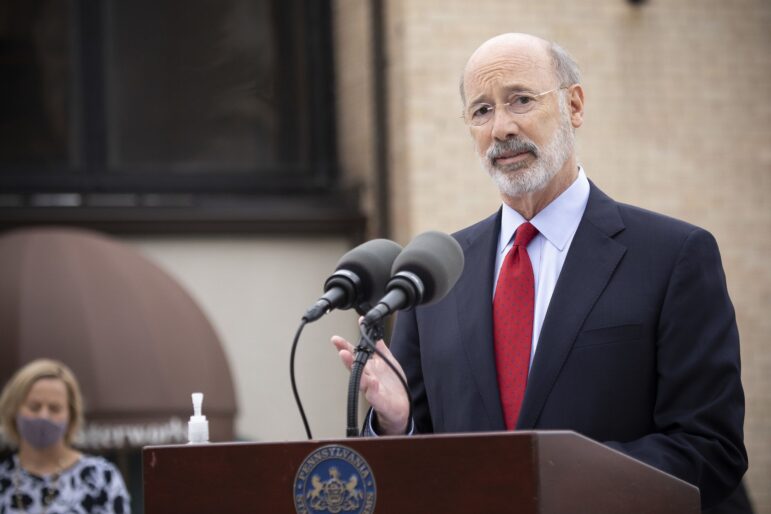 Gov. Tom Wolf on Tuesday dashed any hope of a last-minute reprieve for the thousands of Pennsylvanians who have fallen behind on rent during the coronavirus pandemic.

HARRISBURG — First, he said he couldn’t.

Then, he implied he wouldn’t.

But on Tuesday, Gov. Tom Wolf dashed any hope of a last-minute reprieve for the thousands of Pennsylvanians who have fallen behind on rent during the coronavirus pandemic and reiterated that he does not have the legal authority to extend the state’s temporary ban on evictions, which expired today.

“More than ever, our homes have become our places of refuge during this pandemic,” he said, speaking at a shelter in Harrisburg. “As of 12:01 a.m. today, unfortunately, the protections I instated to keep Pennsylvanians in their homes expired.”

Hanging in the balance of the political standoff are thousands of Pennsylvania households who will be facing eviction in the coming weeks unless the ban is renewed. Tenants who have fallen behind on rent have been protected from eviction since March under an order from the state Supreme Court that Wolf later extended, twice, via executive order.

Housing advocates say the lifting of the ban will bring a surge of eviction filings, displacing thousands of families during an unprecedented public health crisis, with communities of color the worst affected. Almost one in five households did not pay rent last month, according to a Census Bureau survey.

“This issue should have been resolved months ago,” he said.

But Republicans said the first time they heard Wolf could not extend the eviction ban again was last week, when he wrote to lawmakers arguing that he did not have the legal authority to do so.

“We had no clue the governor was not going to renew it again under whatever authorities he claimed to have used in the past until 6:50 p.m. on Aug. 24–seven days ago,” said Jennifer Kocher, a spokesperson for Senate Majority Leader Jake Corman (R., Centre).

In the days following his letter to lawmakers, the governor seemed to hedge. Asked Monday whether he would issue a new ban, Wolf laughed, shrugged and said: “You’ll have to wait and see.” A spokesperson later clarified that “after a thorough legal review” the conclusion was that the governor could not extend the ban after all. “This issue is in current litigation,” she said Monday.

Meanwhile, the state’s main effort to help tenants–a $150 million rental assistance program–has been riddled with problems since it launched in July.

Many landlords, including the largest apartment owner in the state, are refusing to participate because of a $750 cap on the amount of assistance they can receive and a requirement that they waive their right to collect any remaining rent, a Spotlight PA review found. Even when landlords are willing to participate, onerous paperwork requirements have slowed the pace of approving applications to a crawl in some counties.

Democratic lawmakers have introduced bills that would extend the eviction ban and make fixes to the rental assistance program, including scrapping the $750 cap in favor of a funding formula that would vary from region to region, removing a requirement that tenants be at least a month behind on rent to qualify and allowing landlords and tenants to enter into year-long payment plans for rent not covered by the aid payments.

Republican leaders have said they will consider both issues, but have not made any firm commitments. The state House of Representatives is back in session on Tuesday, but the state Senate isn’t set to reconvene until next week.

Bunny-Mae Lowe, who lives with her nine-year-old son and four-year-old daughter in a suburb of Pittsburgh, said she owes roughly $4,000 in back rent after losing her job as a home health aide in March. She said her landlord refused to participate in the state’s rental assistance program, and she expects he will begin the eviction process at once.

Lowe, 32, said she has been selling off possessions online–including “clothes, computer screens, literally anything I have that’s not tied down”–to try and come up with the money.

She said she couldn’t understand why lawmakers would hesitate to extend the eviction ban. “Why would you want to send a single mom and her two kids out on the streets for something that is beyond everyone’s control?” she said. “This isn’t something that people should have to worry about.”