HARRISBURG — It is the nightmare scenario Pennsylvania election officials have fretted over for months: a knock-down, drag-out fight over which presidential candidate will win the state and snag its coveted electoral votes. 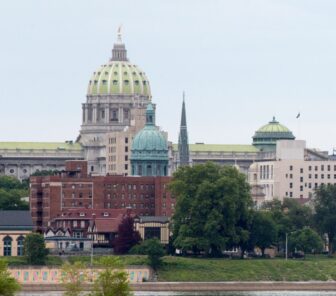 The Pennsylvania legislature could decide to offer its own slate of electors by invoking Article II of the U.S. Constitution following the Nov. 3 election. Since the legislature is controlled by Republicans, their chosen electors would likely support President Donald Trump.

Now, the head of the Republican Party of Pennsylvania has fueled fears of chaos after Election Day, raising the specter that his party could break with tradition and allow the GOP-controlled legislature to choose a slate of presidential electors to cast the state’s votes for Donald Trump–even if the president doesn’t win the popular vote in Pennsylvania.

In comments to The Atlantic made public this week, state Republican Chairman Lawrence Tabas suggested that he had spoken with Trump campaign officials about the possibility of bypassing the results of the popular vote, should there be uncertainty or disputes over the validity of ballots cast. The U.S. Constitution, Tabas said, allows state legislatures to choose presidential electors.

“I’ve mentioned it to them, and I hope they’re thinking about it too,” Tabas told the magazine, referencing the Trump campaign. “I just don’t think this is the right time for me to be discussing those strategies and approaches, but [direct appointment of electors] is one of the options.”

His remarks, coupled with those of state Senate Majority Leader Jake Corman (R., Centre), have placed the state’s political world on alert for a constitutional showdown, with Democrats claiming it would amount to stealing the election.

Senate Minority Leader Jay Costa (D., Allegheny) called it “an affront to all voters and our democracy as a whole.”

“Voters must determine our next president,” Costa said, “not a few Trump loyalists handpicked by Republican legislative leaders.”

Tabas did not respond to multiple requests for an interview. In a statement, state GOP officials said Tabas’ comments were taken out of context to spin a “pre-emptive farce that projects conspiracy, delay and even violence onto Republicans.”

Corman said in a series of tweets Thursday that his comments to The Atlantic–suggesting that the legislature has the power to step in and appoint electors if there isn’t a clean count of the popular vote–were “hypotheticals” and “pure conjecture.”

“I have had zero contact with the Trump campaign or others about changing Pennsylvania’s longstanding tradition of appointing electors consistent with the popular vote,” he said. “The General Assembly is obligated to follow the law and the law is the Election Code, which clearly defines how electors are chosen and does not involve the legislature.”

A spokesperson for state House Republican leaders said there have been no discussions about the legislature taking over the process of nominating electors.

“We have had no discussions about departing from the practice of appointing electors consistent with the popular vote,” said Jason Gottesman, spokesperson for House Majority Leader Kerry Benninghoff (R., Centre).

The Atlantic, quoting sources in the Republican party at both the state and national levels, said the Trump campaign has been making contingency plans to claim widespread fraud during the election, giving them the opportunity to contest results in the days and weeks after Nov. 3.

In the face of such chaos, Republican-controlled legislatures in swing states like Pennsylvania could step in to choose electors who would be loyal to the president.

In most states, electors are nominated by political parties. They are critical players: When voters cast their ballot for president on Election Day, they are actually voting for that candidate’s slate of electors. Those electors then get together a few weeks after the election to formally cast their ballots for the candidate they represent.

Pennsylvania law dictates that each political party’s presidential candidate gets to pick his own electors. It’s a “winner-take-all” state, with 20 electoral college votes.

Trump could “pollute what we are hearing about the election and try to convince people that he hasn’t lost when in fact he has,” said Dan Baer, a senior fellow at the Carnegie Endowment for International Peace.

And if the validity of ballots cast on Nov. 3 is called into question, the Pennsylvania legislature could decide to offer its own slate of electors by invoking Article II of the U.S. Constitution. That section grants state legislatures the right to designate the manner in which electors are selected.

In the 1876 presidential election, three states sent two competing slates of electors to Congress. That precipitated a constitutional crisis, Baer said, “because there was no way to deal with it.”

The Republican party ultimately won the electoral college by one vote.

Exactly how Republicans in Pennsylvania would put forth their own slate of electors is unclear. Members of the party said they have not discussed the process.

“If they are trying to circumvent the governor, that’s the form of legislative direction they would go on,” Boyle said.

Lyndsay Kensinger, spokesperson for Wolf, said Thursday that “any scheme to undermine the public’s confidence in the election process for political gain is an affront to the core values of our nation’s democracy.”

Wolf and Republican leaders are in the midst of a contentious fight over how to best change the state’s election laws to allow for a quicker and less cumbersome vote count in a critical election year.

The state Supreme Court earlier this month handed Wolf a victory when it extended the deadline for mail-in ballots to be returned, allowed voters to submit their ballots through satellite drop boxes and restricted the residency requirements of poll watchers.

Republicans had asked the court to issue a stay, but that request was denied Thursday. GOP leaders say they plan to appeal to the U.S. Supreme Court, while a similar federal case brought by the Trump campaign is still pending.

Left unresolved is a change counties say is critical to ensuring votes are quickly tallied: allowing election boards to begin processing mail-in and absentee ballots before 7 a.m. on Election Day.

“We all want a timely and accurate count,” said Adam Bonin, a Democratic election lawyer in Philadelphia. He said such a change is the best way to achieve that goal.