Although none of the individual metrics are high enough to elevate Lehigh County’s overall COVID risk level according to the site CovidActNow.org, taken together recent increases in the county’s daily new case totals, positive test rate and infection rate may be part of a concerning trend.

For example, the county’s infection rate has recently increased to 1.06. In spite of two brief summertime surges, that’s the highest it’s been since early April, shortly after the coronavirus pandemic began in Pennsylvania. 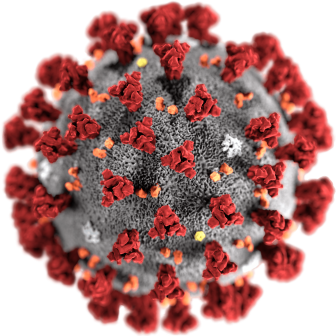 The illustration above, created by the U.S. Centers for Disease Control and Prevention (CDC), reveals the ultrastructural morphology exhibited by the novel coronavirus, which is responsible for COVID-19.

Once the infection rate in a particular location reaches 1.10 that area is classified by the site as having a “high” infection rate, putting it at increased risk of a COVID-19 outbreak.

CovidActNow plots the rate of infection in each county using a 14-day weighted average of data.

The infection rate of 1.06 is the Sept. 21 data point on the site’s chart, which extends it to the current date using a dashed line to represent the latest data from the past seven days.

The extension of the dashed line to Sept. 28 puts the data point for the infection rate at 1.10. However, data is often revised by states several days after it’s reported, so the true rate of infection this week won’t be known until next week, the website notes.

At 1.06 the infection rate for Lehigh County is the 10th highest in the state.

Although that is the highest that statistic has been since early August, it’s significantly lower than the daily new case averages being reported by a number of other counties.

As of Sept. 30 Centre and Northumberland counties in the central part of the state are classified as being at risk of an imminent outbreak or having an outbreak of COVID-10.

Centre County–where Penn State’s main campus is located–is reporting an average of more than 100 new coronavirus cases per day, or 62.9 cases for every 100,000 residents.

Northumberland County, with a population of nearly 100,000 residents, currently has a “critical” positive test rate of 25.3 percent, which means that more than a quarter of the tests currently being administered are returning positive results.

According to CovidActNow, that level of positivity “indicates that testing in Northumberland County…is limited and that most cases likely go undetected.”

“At these levels, it is hard to know how fast COVID is actually spreading, and there is a very high risk of being surprised by a wave of disease,” the site says. “More testing (is) urgently needed.”

In Lehigh County the positive test rate currently stands at 6.5 percent, which is the highest it has been since the county began reporting that statistic in early August.

If the rate were to increase to 10 percent, the county’s current classification according to CovidActNow’s warning system would change from yellow, or “slow disease growth,” to orange, or “at risk of outbreak.”

The same holds true if the daily new case average were to increase to 10 or more per 100,000 residents.

The county’s current classification is yellow.

Earlier this month, Northampton County briefly received a reclassification as “at risk of outbreak” when its infection rate spiked above the 1.1 threshhold. At that level, for every person with COVID-19 another 1.1 people were being infected, which the site warns is an “unsustainable” growth rate for the highly-contagious disease.

Currently the nearby counties of Carbon and Schuylkill both have infection rates that put them in the “at risk of outbreak” or “orange” classification under CovidActNow’s system.

Nevertheless, there continue to be local impacts from the spread of the disease.

Last week Saucon Valley High School in Lower Saucon Township was ordered closed for five days following confirmation of two cases of COVID-19 there within a week. One of the cases was reported by a student and the other was confirmed in a faculty member.

The school is scheduled to reopen for in-person instruction with resumption of extracurricular activities and athletics on Thursday, Oct. 1.

Nearby, Lehigh University in Bethlehem, Northampton County, reported Tuesday that two students have been diagnosed with COVID-19. Consequently, the school has temporarily suspended all athletic training and practices.

The Pennsylvania Department of Health Wednesday reported 1,153 new cases of COVID-19 statewide, which may be the highest one-day increase reported since late July.

On Sept. 14 the department reported 1,409 new cases and on Sept. 28 it reported 1,594 new cases, but those totals combine the number of new cases reported on two days–Sunday and Monday. The state only recently began combining Sunday and Monday’s case totals in a single report, which has caused some confusion among the general public.

As of Wednesday, the Pennsylvania Department of Health had confirmed nearly 160,000 cases of COVID-19 as well as 8,142 deaths from the disease statewide. It said nearly 1.9 million people across Pennsylvania have tested negative for COVID-19 to date.