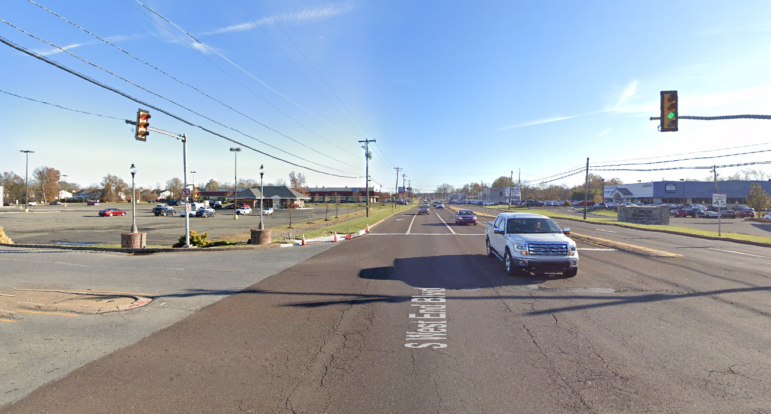 The Richland Township Police Department said Friday that a crash involving a tri-axle dump truck and a Chevrolet Impala outside the Richland Plaza shopping center on Rt. 309 had resulted in a fatality. Although the crash victim’s name was not immediately released, police said he was an 87-year-old township resident.

The Richland Township Police Department announced Friday evening that it is investigating a fatal crash that occurred on Rt. 309 (South West End Boulevard) in the township earlier in the day.

In a news release published on the department’s Crimewatch site, police said the accident happened around 11 a.m. at the entrance to the Richland Plaza shopping center.

A Redner’s grocery store, Ollie’s Bargain Outlet and a number of other stores are located in the retail center.

Police said the crash occurred when a tri-axle dump truck whose driver was northbound on Rt. 309 “went around a vehicle that was slowing at the intersection” of Rt. 309 and the shopping center entrance.

They said the dump truck then struck a Chevrolet Impala whose driver was turning left into Richland Plaza from the southbound lane of Rt. 309.

Killed in the crash was the 87-year-old driver of the Impala, who police said was a Richland Township resident.

According to police, the driver of the dump truck is a 57-year-old man from Telford.

Police did not say whether the dump truck driver suffered any injuries as a result of the crash, however the news release indicated that Rt. 309 in the immediate vicinity was closed in both directions for approximately four hours.

Township police said they are continuing their investigation into what happened in conjunction with the Bucks County District Attorney’s office.

They also thanked the many volunteer fire departments that responded to the crash scene, and extended their condolences to the family of the accident victim, whose name was not released.