Quarterback Dante Mahaffey gets a little help from his Panther Pals against the Northwestern Lehigh Tigers.

What started as a much-anticipated showdown between the Saucon Valley Panthers (2-1) and the Northwestern Lehigh Tigers (4-1) did not disappoint either fanbase throughout the first half of play on Friday night in New Tripoli.  However, what started as a competitive scrap turned lopsided and ugly as the the second-half unfolded.

The Panthers opened up all scoring on their first possession.  Riding a 13-yard run by sophomore Josh Torres and a 32-yard throw and catch from junior Dante Mahaffey to classmate Ty Csencsits, Saucon Valley found themselves knocking on the Tigers’ endzone door.  On 3rd & Goal from the 13-yardline, Mahffey capped a nine play drive with a quarterback-keeper around right end.  Jakob Christopher’s PAT was good and the Panthers sprung out to a 7-0 lead. 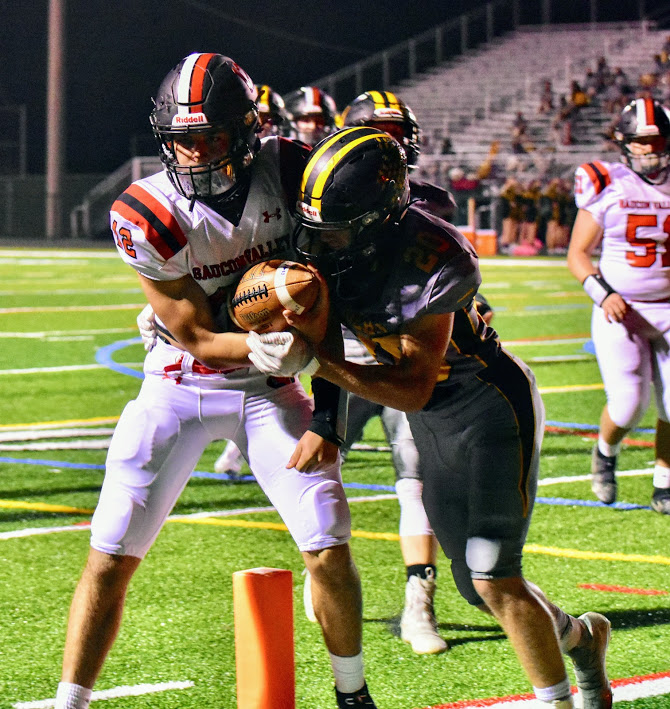 After the two teams traded punts, the Tigers struck.  Northwestern Lehigh put together eight plays including a 34-yard pick-up by quarterback Justin Holmes.  The Tigers game- tying touchdown came when senior running-back, Nick Henry took the plunge from one yard out.  After one quarter of play the score was knotted, 7-7. 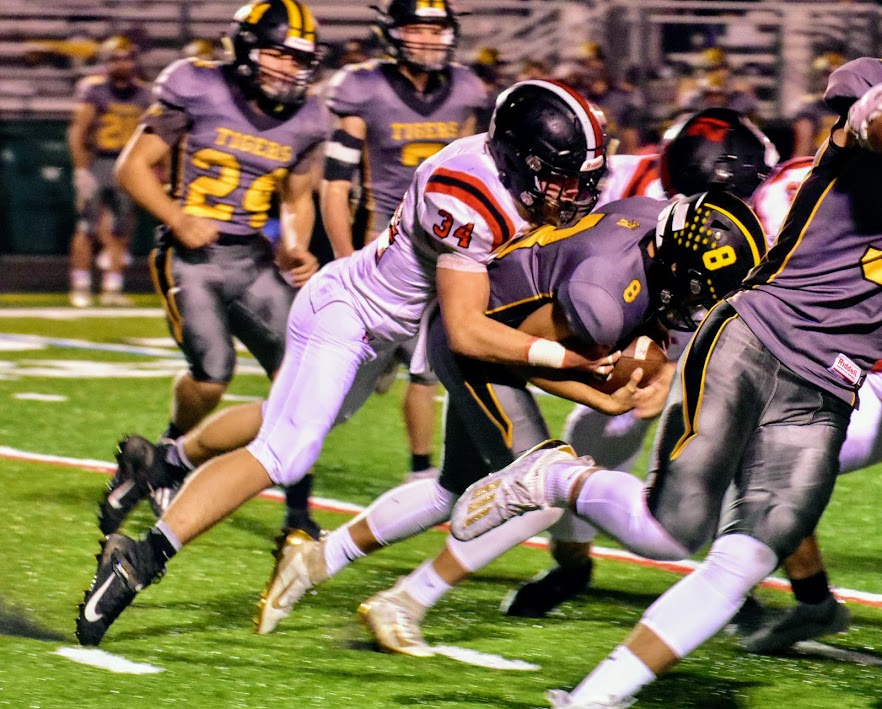 Sophomore linebacker Ty Pfizenmayer (#34) and the Panther defense had their hands full with the Tiger offense.

The Saucon Valley offense sputtered and was forced to punt.  Northwestern took advantage and embarked on a nine play drive that included eight runs.  The Tigers found paydirt from two yards out on fourth down.  The point-after was good and Northwestern Lehigh took a 14-7 lead.

The Panthers again went three-and-out.  And, once again, the Tigers took advantage by completing a 72-yard drive for a TD.  From his running-back position, Nick Henry started right and cut back left to score on a 26-yard run.  The PAT was no good, but Northwestern increased their lead 20-7. 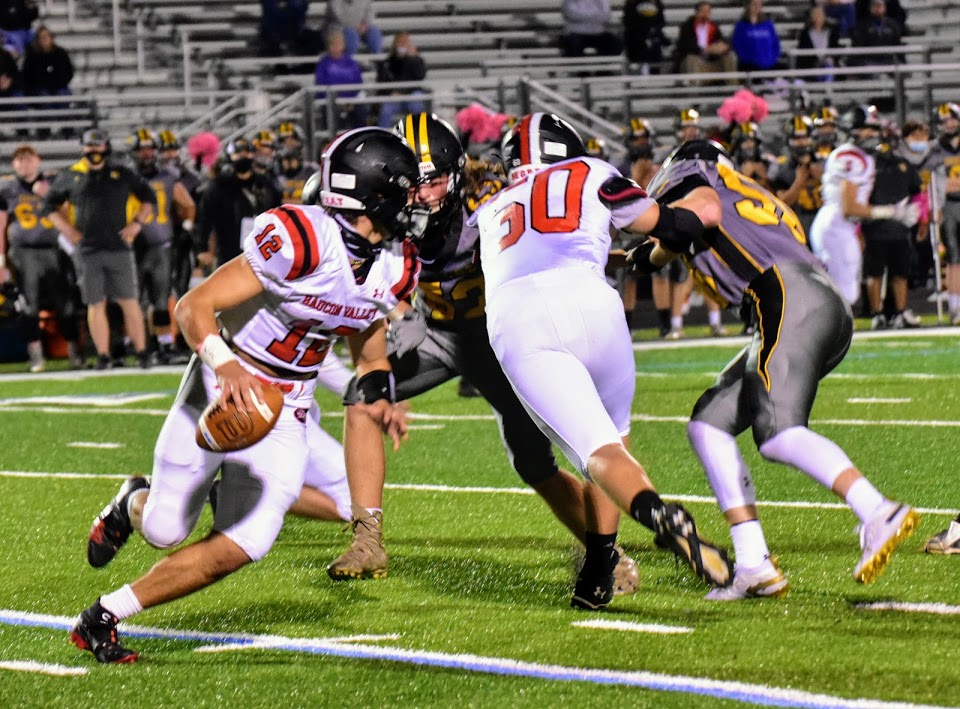 Mahaffey, who threw for 157 yards and a TD, scrambles as he looks to make a big play.

Saucon Valley started their next possession at their own 34-yardline and made the most of it.  Featuring a 31-yard pass and catch between Mahaffey and Csencsits, the Panthers found themselves at the Northwestern 35-yardline.  A couple plays later, Mahaffey threw a beautifully placed ball to sophomore Alex Magnotta who high-pointed a spectacular catch in the back of the Tiger endzone.  Christopher connected for the extra-point and Saucon Valley was in the game trailing 20-14 at the halftime break.

However, it ended up being a dark and ugly third quarter for the Panthers.  The Tigers exploded for points.  TD passes of 61, 41 and 25 yards combined with a Cade Christopher pick-six interception stunned Saucon Valley and they fell into a deep 49-14 hole. 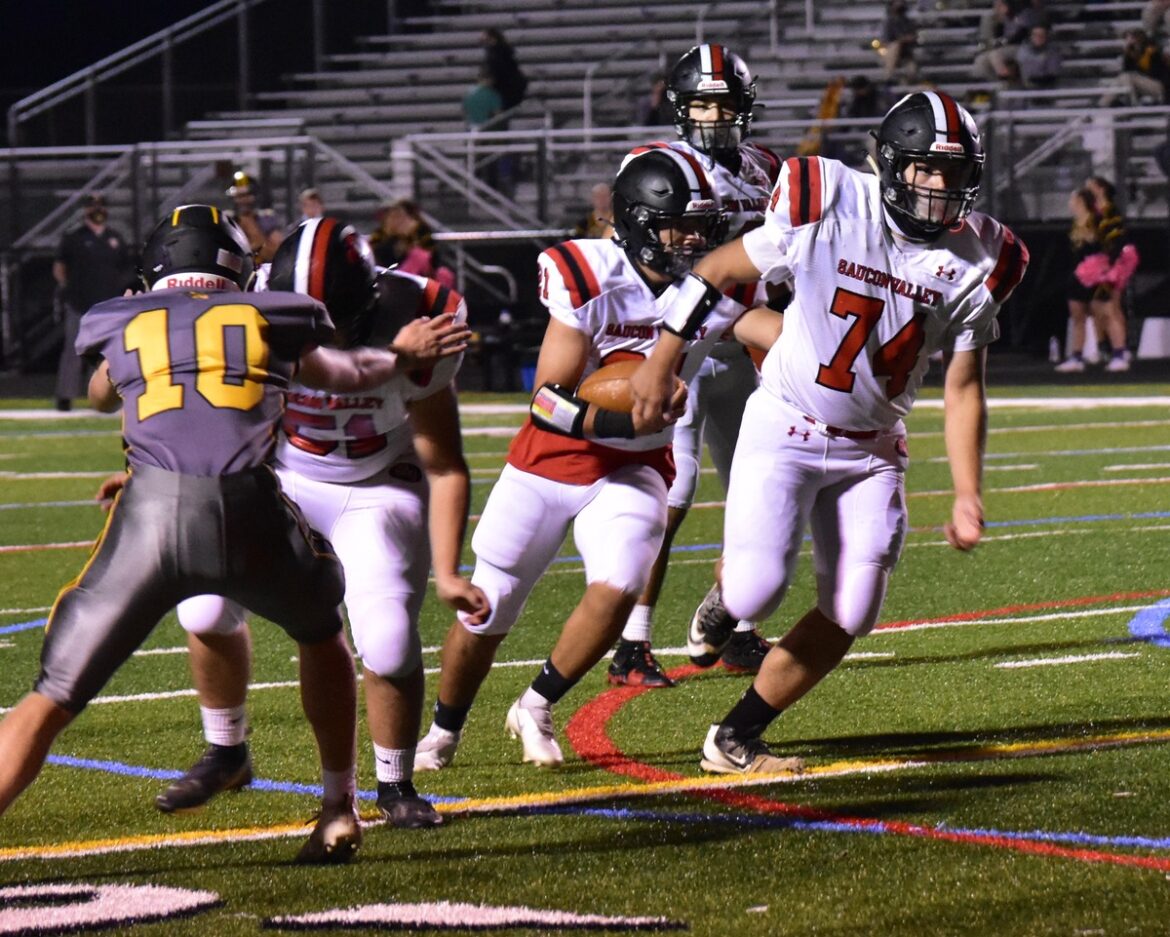 Saucon Valley would cash in on a Damian Garcia 10-yard touchdown run and a 63-yard touchdown pass from sophomore Travis Riefenstahl to freshman wideout Constantine Donahue, but it was too little too late.  The Panthers were mauled by the Tigers 55-28.

Good luck Panthers, The Source is with you!

In case you missed it, here is Friday’s livestream……

(Check out some more great photos by Lisa Pfizenmayer!) 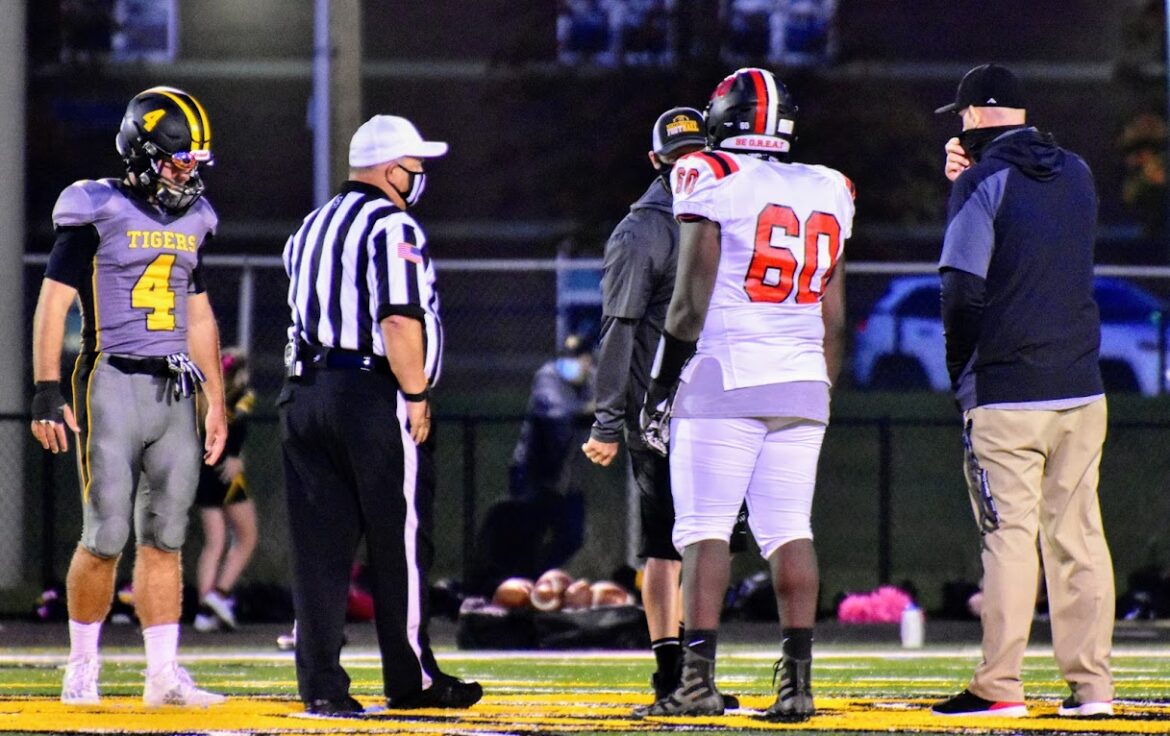 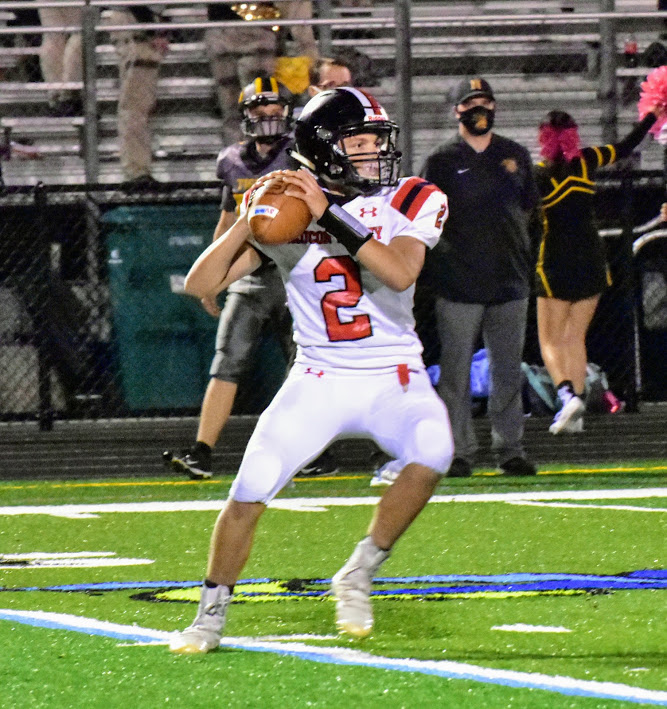 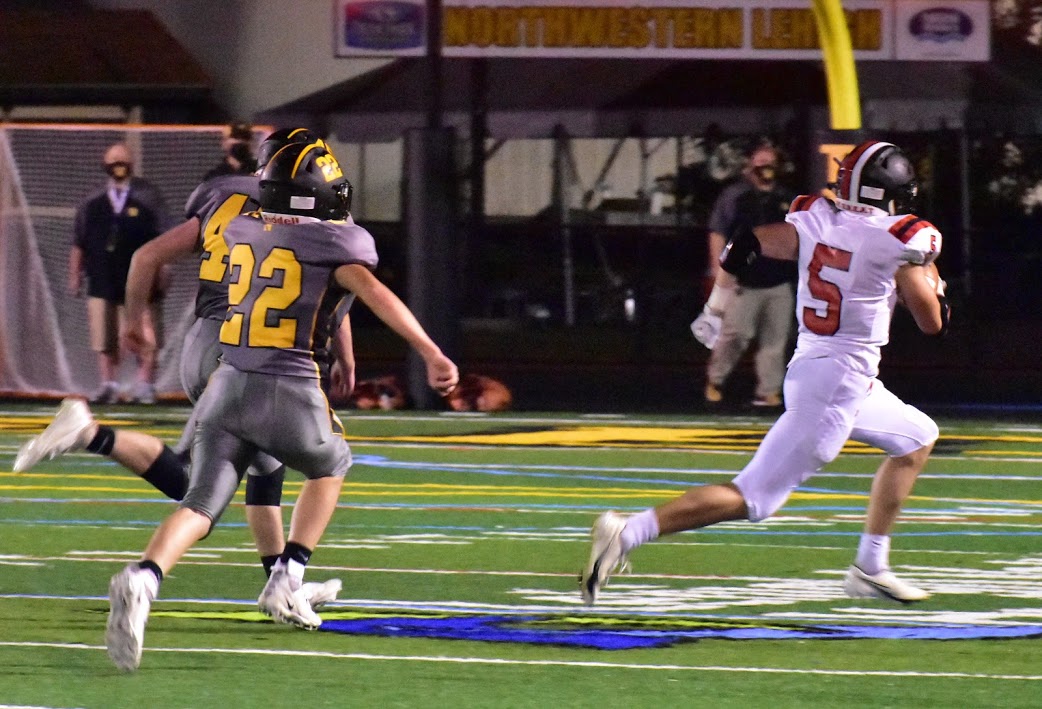 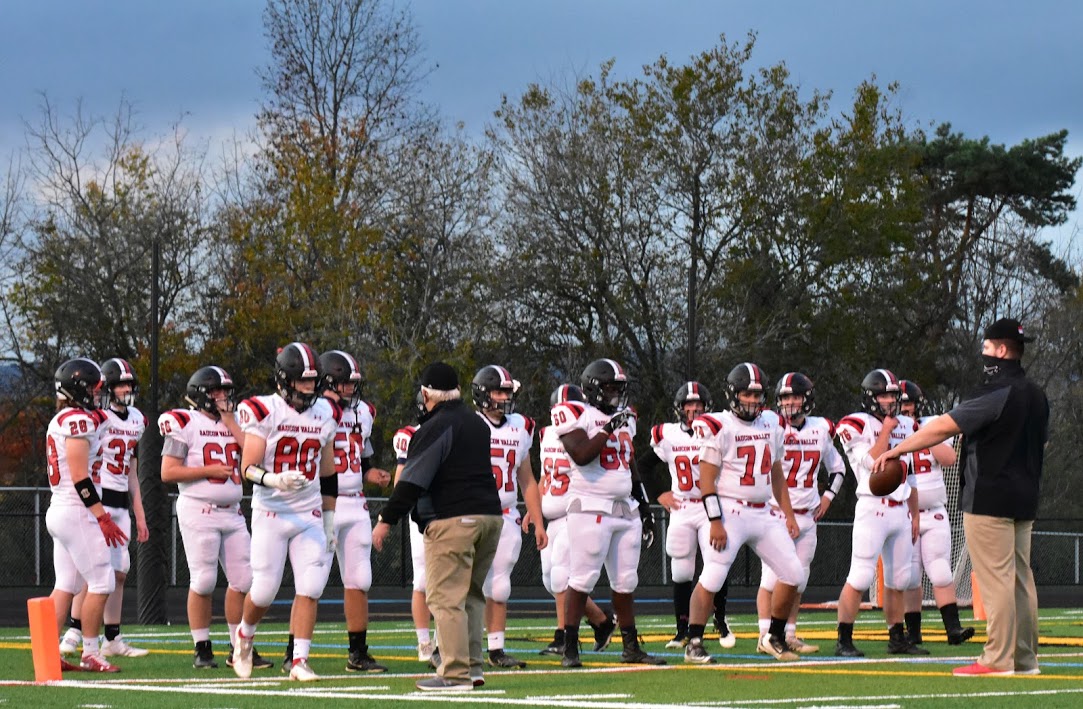 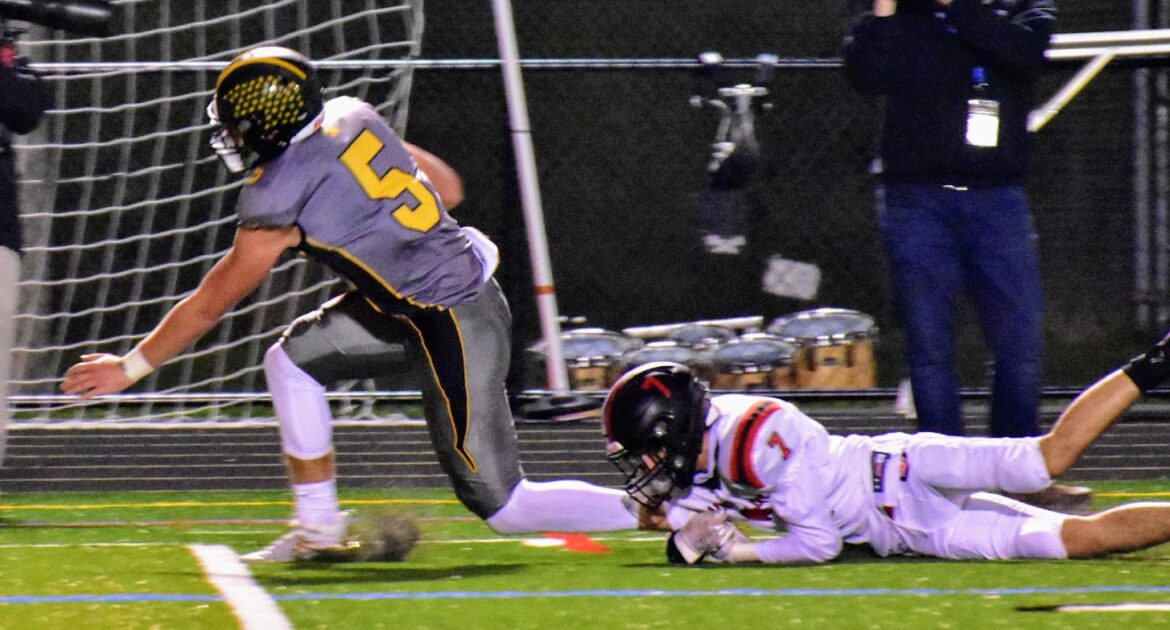 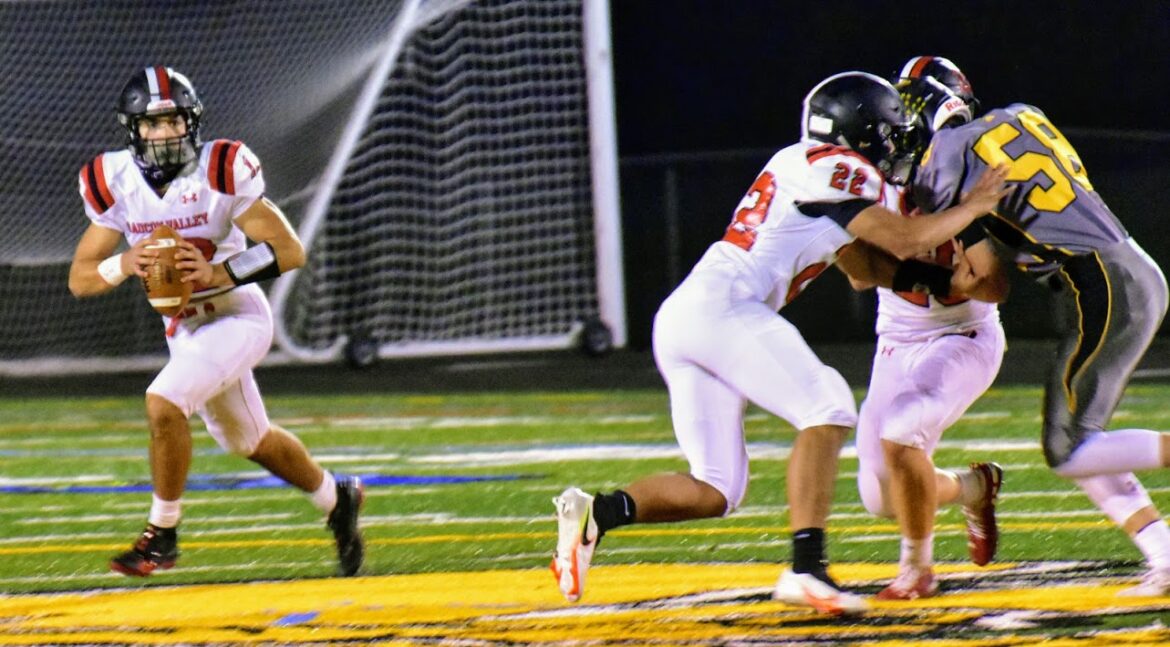 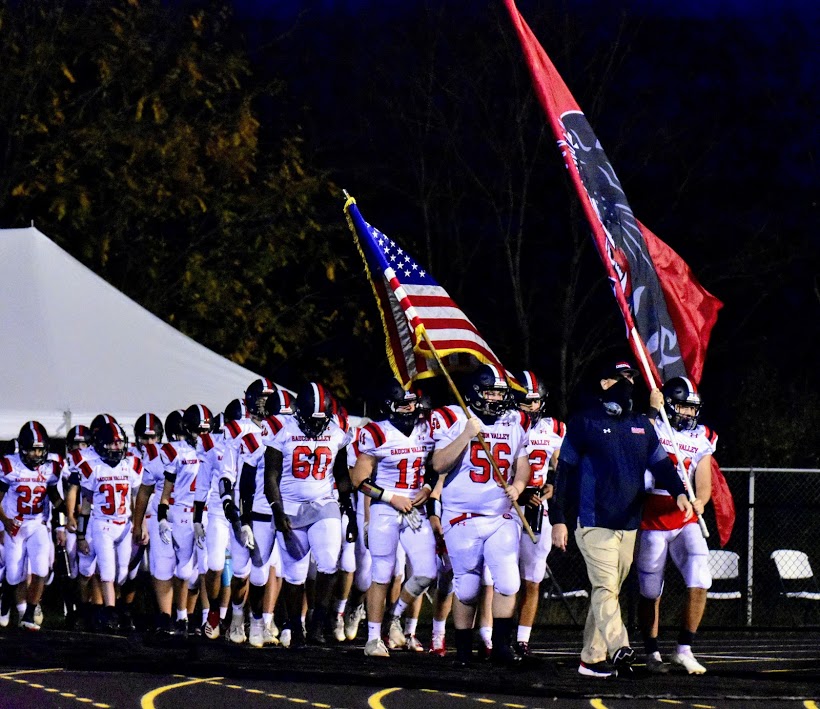