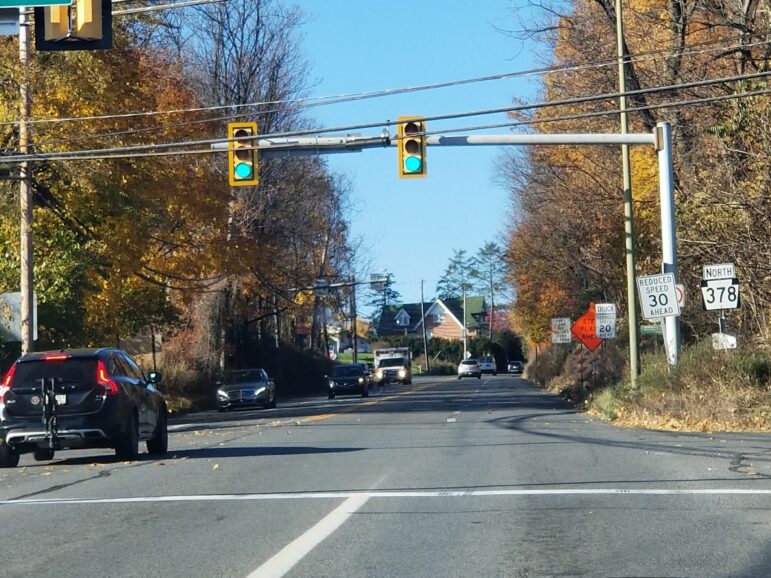 The right lane of Rt. 378 northbound between Seidersville Road and Mountain Drive North has had a hazard in it no driver wants to encounter: a piece of concrete, one corner of which is several inches above the surrounding road surface. Motorists who have driven across it have complained of damage to their vehicles. PennDOT spokesman Ron Young said the uneven road surface is related to work being performed by UGI, which is supposed to temporarily repair the roadbed for the winter.

Roadwork crews contracted by UGI will be working over the next week to repair an uneven patch of concrete on Rt. 378 in Lower Saucon Township that has been plaguing motorists for the past week.

The hazard can be found in the right lane of Rt. 378 while driving northbound between Seidersville Road and Mountain Drive North.

Ron Young, PennDOT’s press officer for Engineering District 5, said the utility company had been working in that stretch of road under a Highway Occupancy Permit. PennDOT often issues these permits so utility companies can install, repair, replace, connect, remove or disconnect lines, facilities and systems.

“The contractor working for UGI will patch the area within the next week and maintain the patches until next spring when they are able to do the final re-paving of that section of PA 378,” Young said.

The repair work is arriving too late for some motorists.

Local residents who regularly travel that stretch of road took to the social media app Nextdoor this week to complain about damage done to their vehicles.

“The uneven asphalt surface that you see on the images literally shredded into the sidewall of my tire, and I had an immediate flat,” one user said in a post in the Woodfield/Hickory Hill neighborhood group.

“Without question, avoid the right lane, for fear of damage or potential accident,” commented another.

Another user commented that their son suffered a flat tire in the same spot.

Young said motorists whose vehicles may have sustained damage should reach out to UGI.

Efforts to reach UGI for more information about the nature of their work in the area were unsuccessful as of the time of publication.

In an email Thursday, PennDOT officials said UGI would be making “pavement repairs” on Rt. 378 between Seidersville Road and Mountain Drive North between 9 a.m. and 3 p.m., however it wasn’t immediately clear if additional work in the area will be needed.

There are two northbound lanes of travel in the area in which the concrete square is raised several inches, so motorists may still want to use the left lane as a precaution.