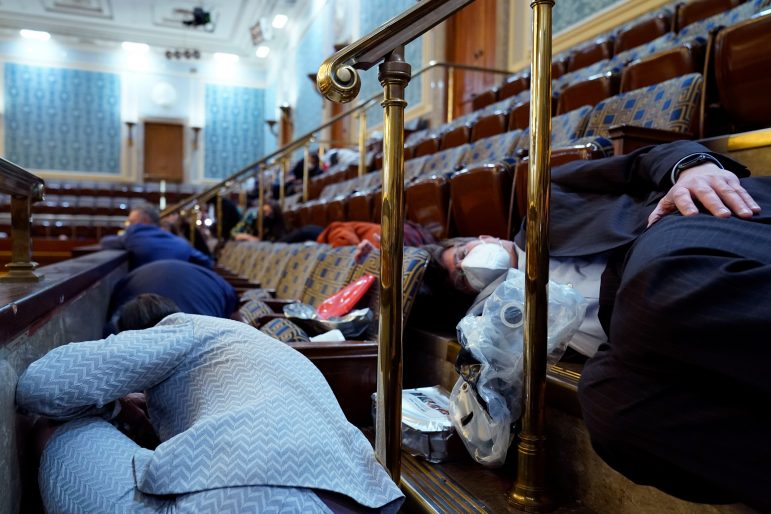 Members of Congresss shelter in the U.S. House of Representatives gallery as pro-Trump protesters attempt to break into the House Chamber at the U.S. Capitol on Wednesday, Jan. 6, 2021, in Washington, D.C. (AP Photo/Andrew Harnik)

A Lehigh Valley school district has announced that it has suspended a teacher who was part of a pro-Trump protest that turned into a violent riot at the U.S. Capitol Wednesday.

In a statement published on the Allentown School District’s website, district officials said they learned Thursday that the unnamed teacher “was involved in the electoral college protest that took place at the United States Capitol Building on January 6, 2021.”

At least four people died in the protest, including a 35-year-old woman from California who was shot by Capitol Police when she attempted to smash through a window inside the building and a central Pennsylvania man who suffered an unspecified medical emergency while he was participating in the unprecedented gathering.

WNEP reported Thursday that 50-year-old Ben Philips, of Bloomsburg, was a pro-Trump event organizer and the founder of the social media site Trumparoo who organized a bus trip to the event.

It was unclear how many Lehigh Valley area residents participated in the rally, which was largely organized online and attended by thousands of individuals who believe conspiracy theories about the 2020 presidential election being stolen from Donald Trump.

Trump conceded in a videotaped statement shared on his Twitter feed Thursday that Biden would be the next president of the United States upon his inauguration Jan. 20.

More than 50 police officers were injured when a mob that marched from the Ellipse–where Trump spoke to them–stormed the Capitol building as part of a coordinated effort to stop the Electoral College votes that certified Joe Biden’s victory from being counted.

It was the first time the building had been overtaken since 1814, when the British occupied it during the War of 1812.

One officer who was hurt in the riot was on life support as of late Thursday.

“The chaos that took place in the nation’s capital yesterday was deeply troubling and these actions may have caused immense pain to our students, staff and families,” the Allentown School District said in its statement about the teacher. “It occurred at a time when we are already grappling with the impacts of a global pandemic that has affected the education, health and livelihoods of families throughout our community.”

“Because of the emotion and controversy stirred by the events of January 6, 2021, the teacher has been temporarily relieved of his teaching duties until the school district can complete a formal investigation of his involvement,” it concluded.