An Allentown teacher who was suspended from his job after attending the Jan. 6 “March to Save America” rally in support of former president Donald Trump in Washington, D.C., criticized the district in an interview with CNN’s Michael Smerconish Saturday.

Jason Moorehead was joined by his attorney, Francis Malofiy, for the interview, in which he said he never even got close to the U.S. Capitol, which was stormed by hundreds of pro-Trump insurrectionists following the rally.

Moorhead said he was never within a mile of the Capitol building and told Smerconish he didn’t find out it had been breached until “much later.”

“We walked around the Washington Monument, tried to get close to the White House, ate a hot dog and went back to the bus,” he said.

During the five-minute interview, Smerconish put up a screenshot of a social media post Moorehead made at or after the rally, in which he captioned a photo of himself wearing a Make America Great Again hat, carrying a flag and not wearing a mask, “Doing my civic duty!” 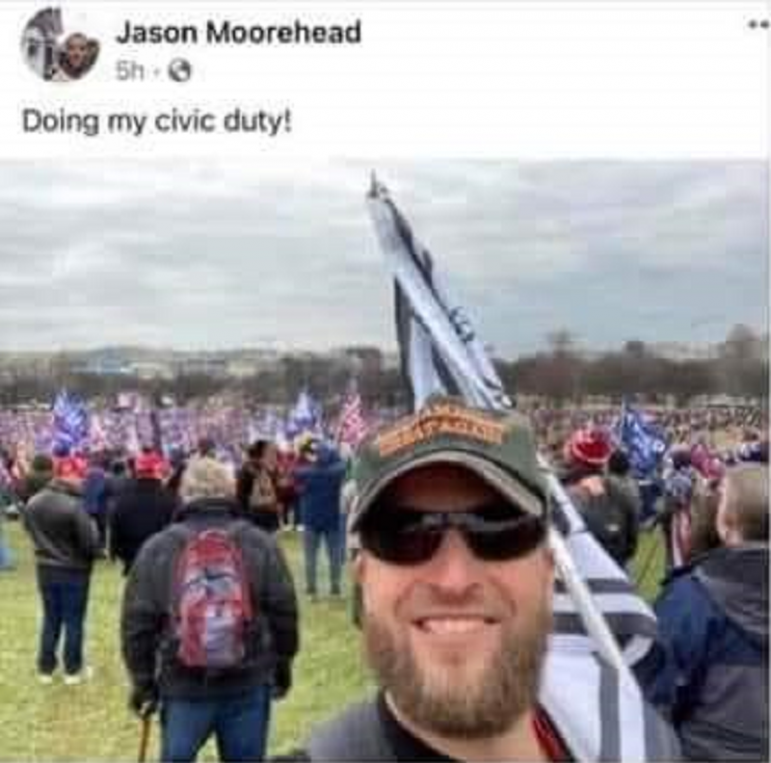 Allentown teacher Jason Moorehead posted this photo of himself attending the “March to Save America” in Washington, D.C., Jan. 6. Immediately following the rally–at which then-president Donald Trump addressed supporters and told them to “fight like hell” to help keep him in office–thousands marched on and laid siege to the U.S. Capitol, where Congress was in the process of certifying Joe Biden’s Electoral College victory in the November election. Moorehead told CNN host Michael Smerconish Saturday he didn’t march to the Capitol and didn’t find out it had been attacked until later. He and his attorney criticized the district’s decision to suspend him pending the outcome of an investigation.

In another post the host highlighted, Moorehead shared a screenshot of a tweet that said, “Don’t worry everyone the capitol is insured.”

When questioned by Smerconish about what he was “trying to convey,” Moorehead said any comparison to conservative whataboutisms regarding the damage caused by riots in the wake of George Floyd’s death last year is unwarranted.

“I want to be clear. I was not mocking BLM or antifa with that post,” Moorehead said. “I was trying to highlight what I believe is the double standard that often exists in the media, when they’re looking at two different events from two different groups.”

During the interview, Smerconish also put up a Facebook post by an unidentified individual who criticized Moorehead for being at the rally at all, particularly in light of the fact that he is part of a “heavily minority based teaching program.”

More than 72 percent of students enrolled in the Allentown School District are Hispanic, nearly 14 percent are Black and 8.6 percent are white, according to publicly available data from the district.

Moorehead, who is white, responded to the criticism by telling Smerconish he was doing his “civic duty” by attending the rally.

“I definitely have some conservative values and beliefs, but they have never taken part in what I do in the classroom,” he asserted. “I’ve always encouraged my kids to be critical thinkers, and to form their own opinion; one that they can be proud to have.”

Malofiy at that point noted that Moorehead has been employed as an Allentown teacher for 17 years, and said the district had erred by putting out a statement that wrongly implied he was “violently protesting.”

“To never correct that statement after they learned that he was nowhere near the Capitol building protest…is defamatory and has destroyed his life,” he said. “We talk about diversity of people, but we’ve forgotten diversity of speech, thought and opinion. In public schools there needs to be critical thinking that can only happen if the two sides are represented, and you can’t endorse a political movement to the exlcusion of another, otherwise it violates the First Amendment.”

Teacher Jason Moorehead was temporarily suspended while his school district says it is investigating his actions in DC on Jan. 6.
“I was there just observing firsthand to be a witness to a historic day and never was anywhere within a mile of the riot,” he tells @smerconish. pic.twitter.com/XsPB0zCJGx

Moorehead’s suspension by the Allentown School District was announced on its website the day after the insurrection. The district did not identify him in the announcement, in which it said he had “been temporarily relieved of his teaching duties until the school district can complete a formal investigation of his involvement.”

District officials have not said how long that investigation might take.

The announcement cited “the emotion and controversy stirred by the events of Jan. 6, 2021…at a time when we are already grappling with the impacts of a global pandemic that has affected the education, health and livelihoods of families throughout our community.”

“I’m currently waiting for them to do the right thing–to reinstate me, and ideally offer a full apology, absolving me of any wrongdoing, because my reputation and character has been destroyed,” Moorehead said in the televised interview.

“I’ve been bullied,” he added.

Officials in other districts have also been questioned regarding their involvement in–or shared sympathy for–the rally and/or the riot that followed it.

In the Pennridge School District in Bucks County, school board vice president Joan Cullen was criticized by some residents not only for attending the rally but also for foregoing a face mask while doing so.

In a statement, the district said attending the rally was within Cullen’s First Amendment rights and under the Pennsylvania School Code it has “no authority” to remove her.

Upper Perkiomen school board member Raeann Hofkin said in a tweet following the Capitol insurrection that the participants were “patriots” and “harmless.”

Five people were killed in the riot, including a Capitol police officer who was bludgeoned with a fire extinguisher and a protestor who was shot as she attempted to breach a secure area within the building.

In the Saucon Valley School District, classroom discussions were not held about the insurrection, which a week later resulted in the second impeachment of Donald Trump.

The inauguration of–and peaceful transfer of power to–President Joe Biden two weeks after the attack was only shown to elementary and middle school students in the district.