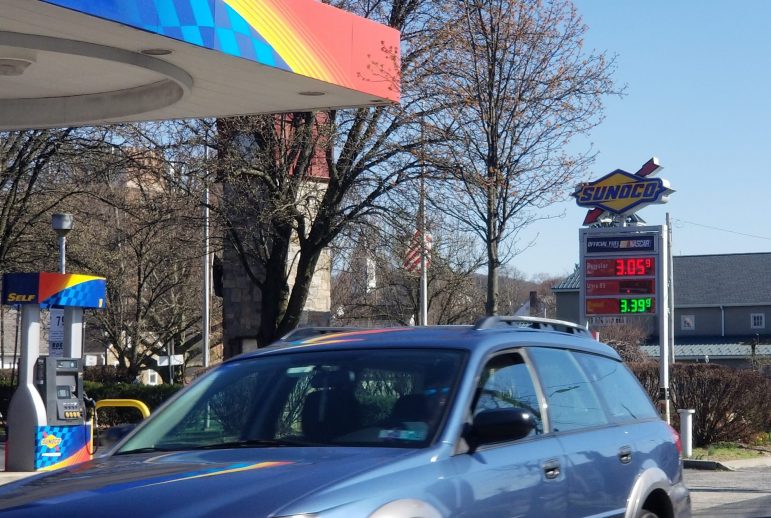 On Monday, a gallon of regular unleaded gas cost $3.05 at Sunoco, 701 Main Street in Hellertown. That’s higher than the current average in the Lehigh Valley, which is $2.96/gallon. Approximately a year ago, a gallon of gas cost about a dollar less.

The recent mild weather the Lehigh Valley area has enjoyed has inspired thoughts of summertime travel, but one look at the price of gas could mean a buzzkill for anyone with a yen for hitting the road in the near future.

In Hellertown Monday, three of four stations were selling unleaded gasoline for more than $3 a gallon, including both Sunoco stations and the Exxon at 1570 Main Street. The bargain gas, according to GasBuddy.com, was at Citgo, where a gallon of unleaded was just $2.99.

And if it seems like gas costs a lot more than it did a year ago, you’re not imagining things.

In late March 2020, the price of gas was plummeting, in large part due to the coronavirus pandemic and shutdown orders that killed demand for gasoline.

Prices bottomed out in late April of last year at around $1.96 a gallon in the Allentown area and $1.74 around the nation.

Why is gas so much more expensive now than it was last spring?

In part, the New York Times reported earlier this month, it’s the result of “restrained” production by oil refineries.

In viral social media posts and elsewhere, pundits and others have blamed the recent increase in gas prices on President Joe Biden and his decision to halt the Keystone XL pipeline project.

A report published by Capital Public Radio News, however, cites industry experts who say the project has nothing to do with the current prices, because it doesn’t affect supply.

“Energy experts say the increase is largely due to supply and demand, rather than any presidential policies–people are driving more, there’s also more air travel now as the economy slowly rebounds,” the report concludes.