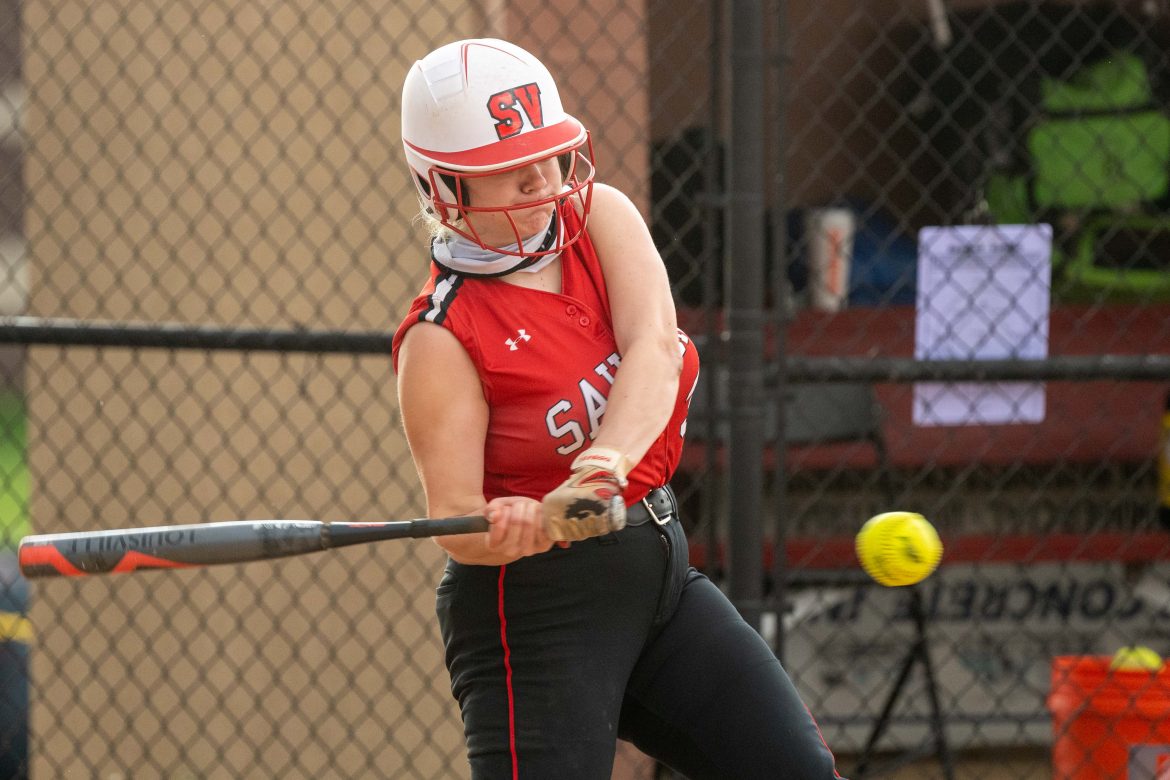 Junior Emma Rudolph singles to right centerfield in the sixth inning against the Salisbury Falcons.

The Saucon Valley High School softball program hosted the Salisbury Falcons in a softball showdown Monday.  The Panthers and Falcons laced up their cleats to hit the field on Saucon’s campus and treated the fans to a very entertaining competition.  It was a rollercoaster ride between the Panthers and Falcons. 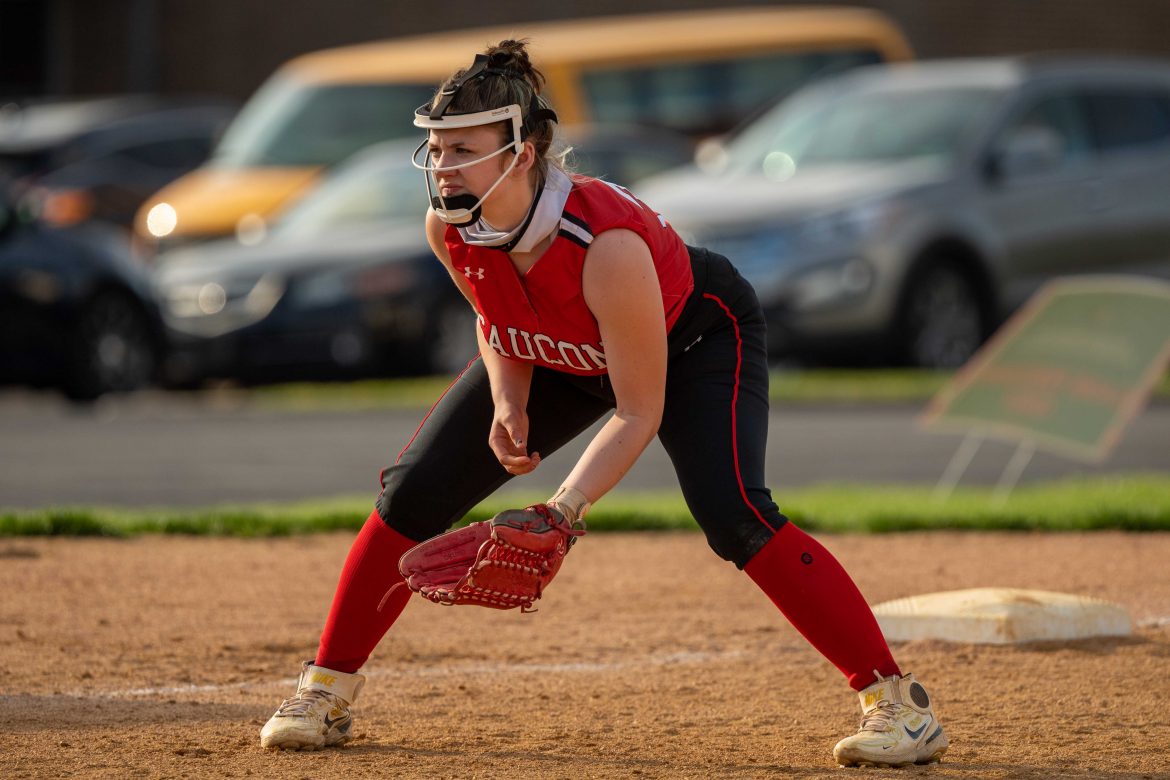 Junior Kellie Boyle ready to defend at third base against the Falcons.

Saucon Valley could not have asked for a better start against the Falcons.  Panther pitcher Kayla Brown took the mound and put the Falcons down in 1-2-3 order.  The Panthers then pounced on the Falcons right away.  Sophomore Kaily Brennan led off to draw a walk and quickly stole second base.  Senior Jaclyn Barbera advanced Brennan to third base with a sacrifice fly to right field.  Junior Jennifer Barbera followed with an RBI single.  Junior Emma Rudolph then stepped to the plate and pounded a hard-hit ground ball to first base that was fumbled. Rudolph landed safely on first base while Barbera advanced to second base.  Kellie Boyle took advantage of the situation with her at-bat and laced a line drive through the gap in right-centerfield.  Both Barbera and Rudolph scored while Boyle ended up on third base.  Senior Ally Frace joined the party with a ground-ball sacrifice that scored Boyle.  The Panthers batted around to take a 4-0 lead at the end of the first inning. 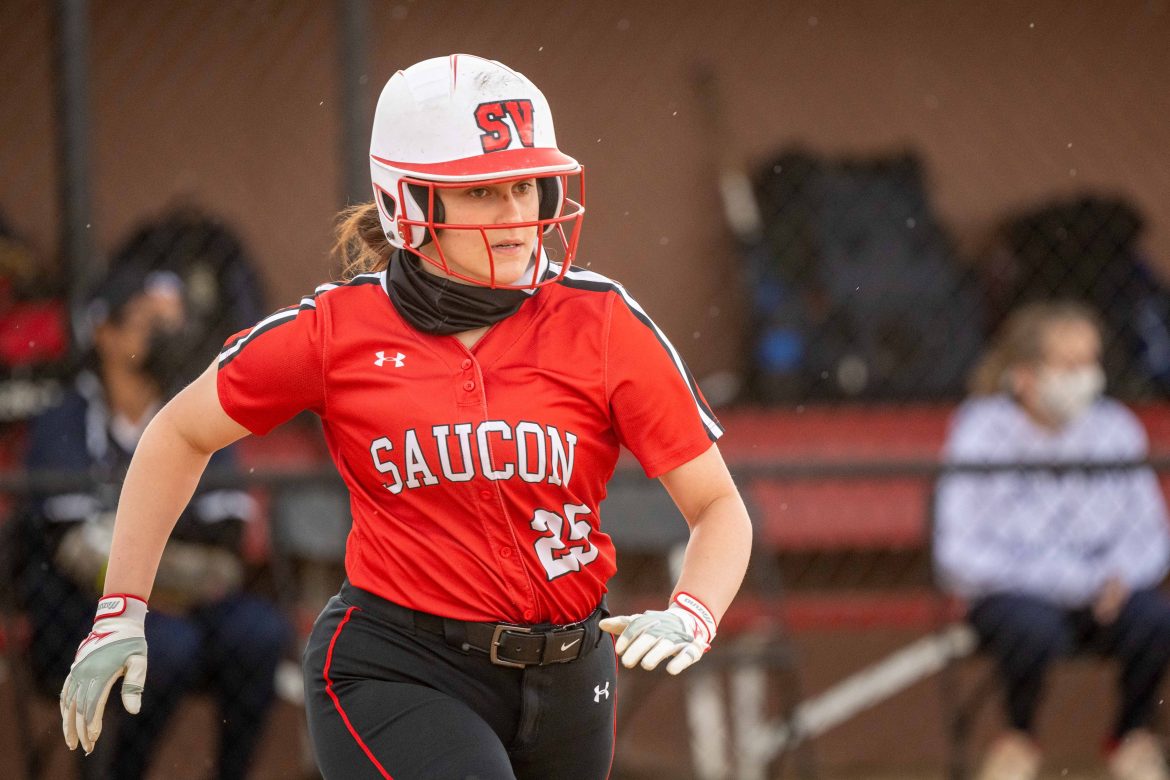 Senior Ally Frace trucks it toward first base with her RBI sacrifice.

Things settled down until the top of the third inning when the Salisbury bats started popping.  The Falcons hit the ball hard and batted around to the tune of five runs scored.  Salisbury’s 5-4 lead did not last very long as the Panther offense took revenge.  With Panther runners on first and second base, freshman Victoria Fink’s sharply hit line drive to centerfield scored Morgan Mixa, while Kailea Danubio advanced to second base.  Jaclyn Barbera then came to the plate and did her Babe Ruth impression much to the joy of the Saucon girls lacrosse team who were practicing on the adjacent field.  Barbera’s bomb cleared the centerfield fence and landed on the lacrosse field as three runs scored.  Saucon Valley reclaimed the lead with an 8-5 advantage. 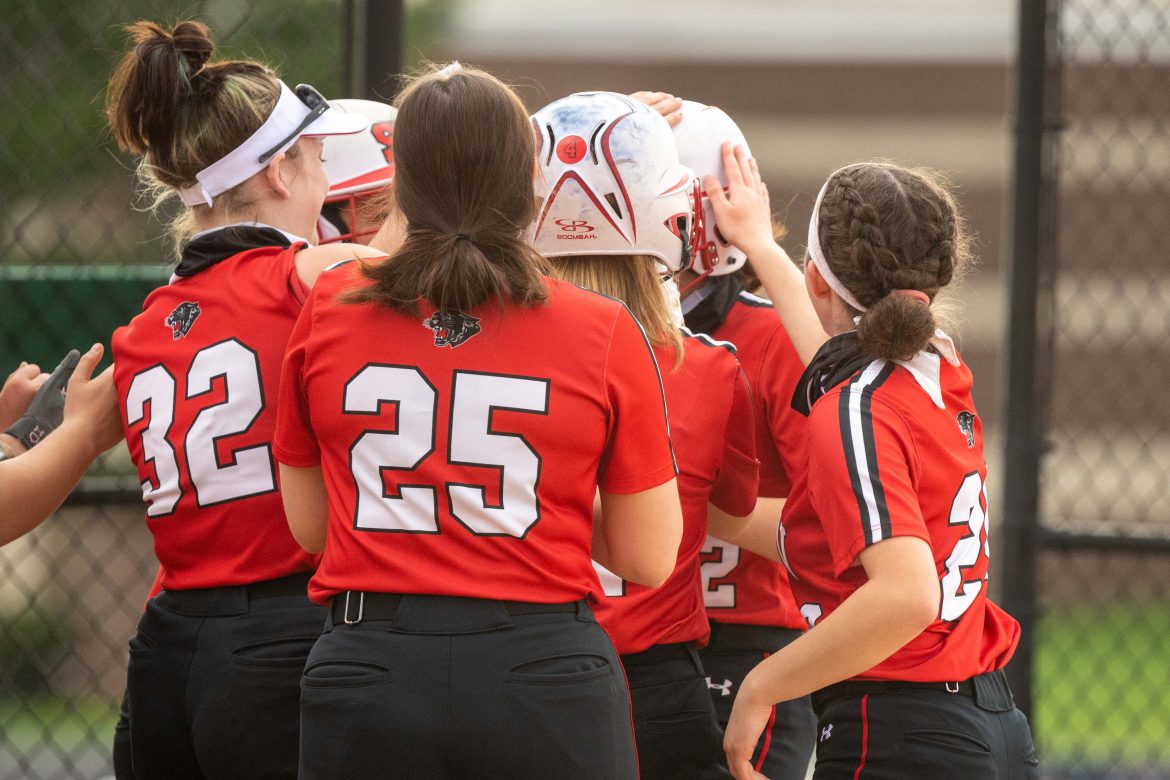 Senior Jaclyn Barbera greeted by the mob after her homerun over the centerfield fence.

Kailea Danubio took the mound for the Panthers and minimized any serious trouble allowing the Falcons a single run to score in the top of the fourth inning.  But, the Panthers got the run right back with their next at-bat in the bottom of the inning when Morgan Mixa’s low-liner to right centerfield scored Kellie Boyle. 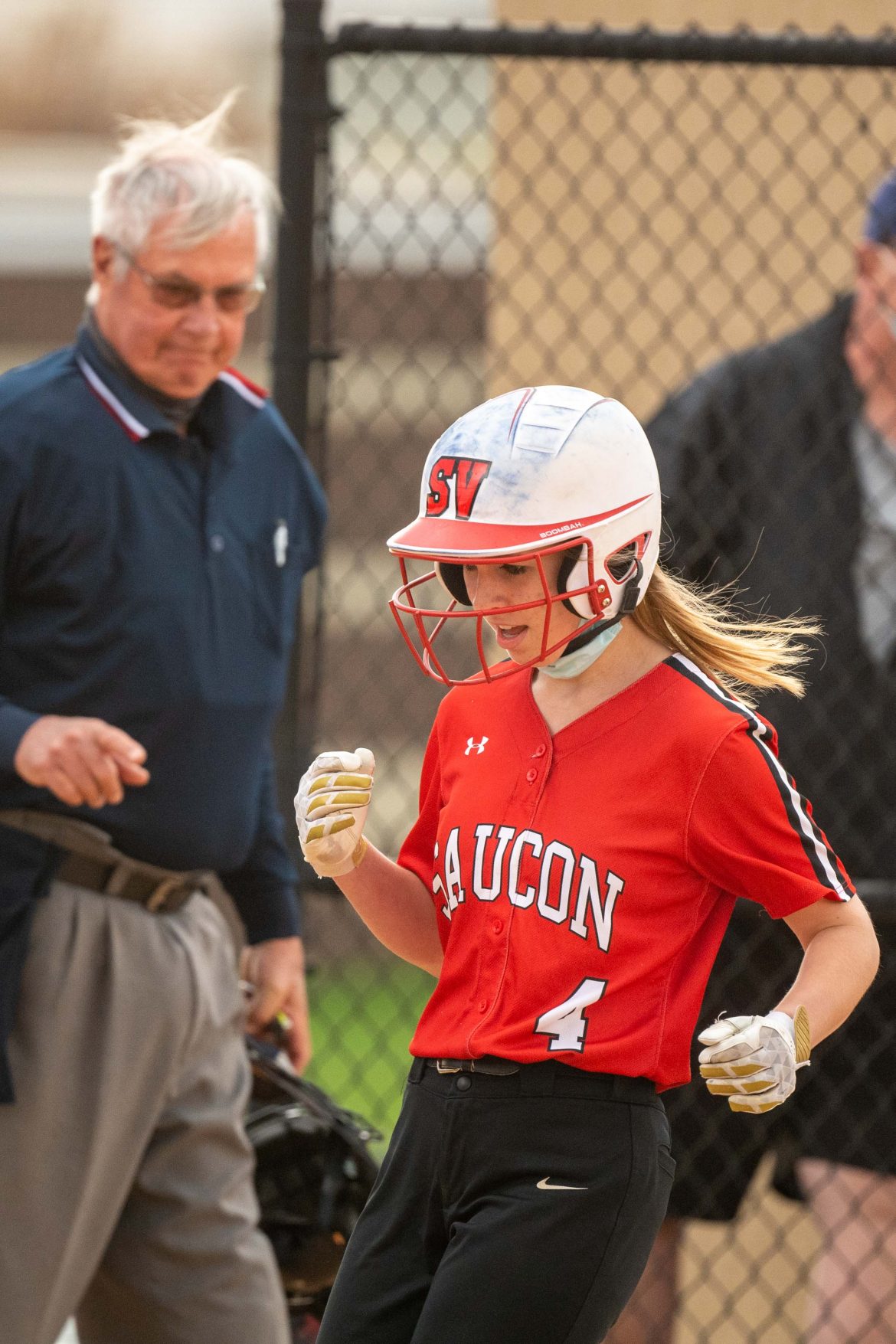 Jennifer Barbera moved to the mound from first base to close out the game in the top of the fifth inning.  After giving up a couple of base hits to the first two batter she faced, Barbera settled in and escaped the inning without surrendering any runs.   Tori Fink started the inning for the Panthers in the bottom half of the inning with a leadoff triple.  Fink later scored on Jaclyn Barbera’s sacrifice fly to right field.  The Panthers took a 10-6 lead into the sixth inning. 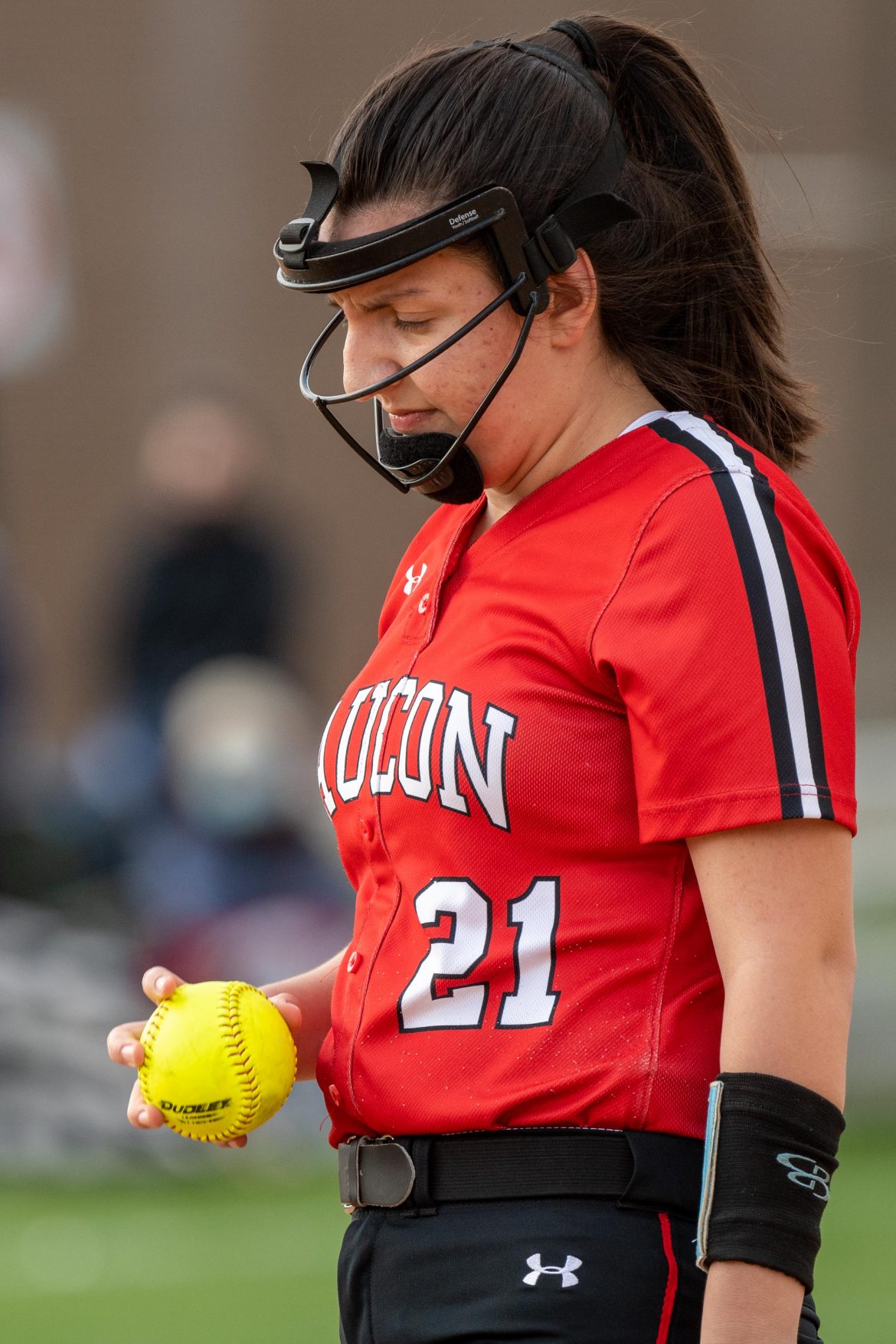 Panther junior Jen Barbera was called upon to close out the game against Salisbury.

After a leadoff walk to Falcon freshman pitcher Elizabeth Carney, junior catcher Marcie Silberman connected on a moon-shot over the left-field fence that got the Falcons within two runs.  Silberman’s blast was impressive, but that was all the Falcons could get. Saucon Valley’s defense was solid down the stretch and the Panthers held on to defeat Salisbury 10-8.

Up Next: The Panthers will host the Northwestern Lehigh Tigers on Friday, 4/23.   The first pitch is schedule for 4:15. 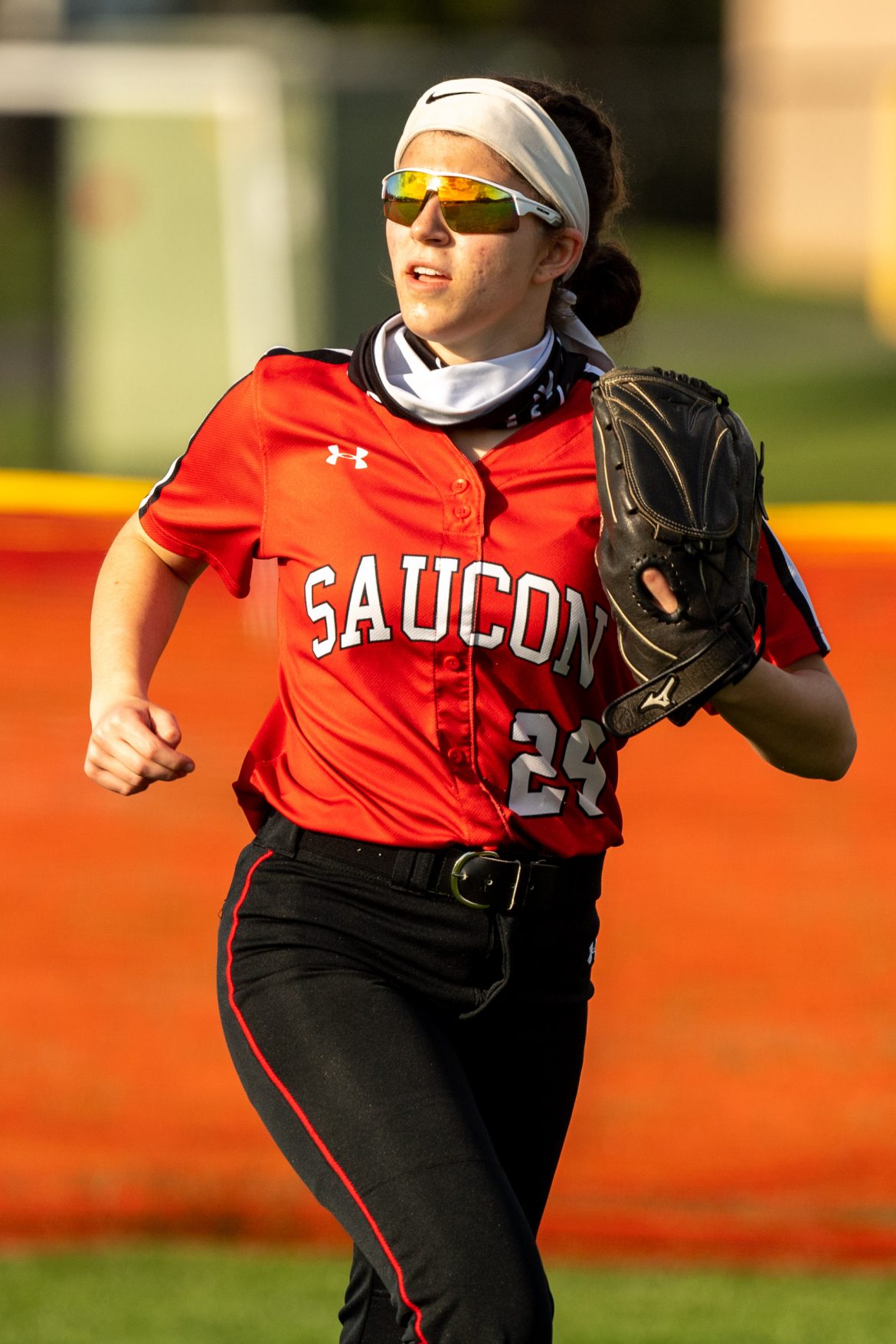 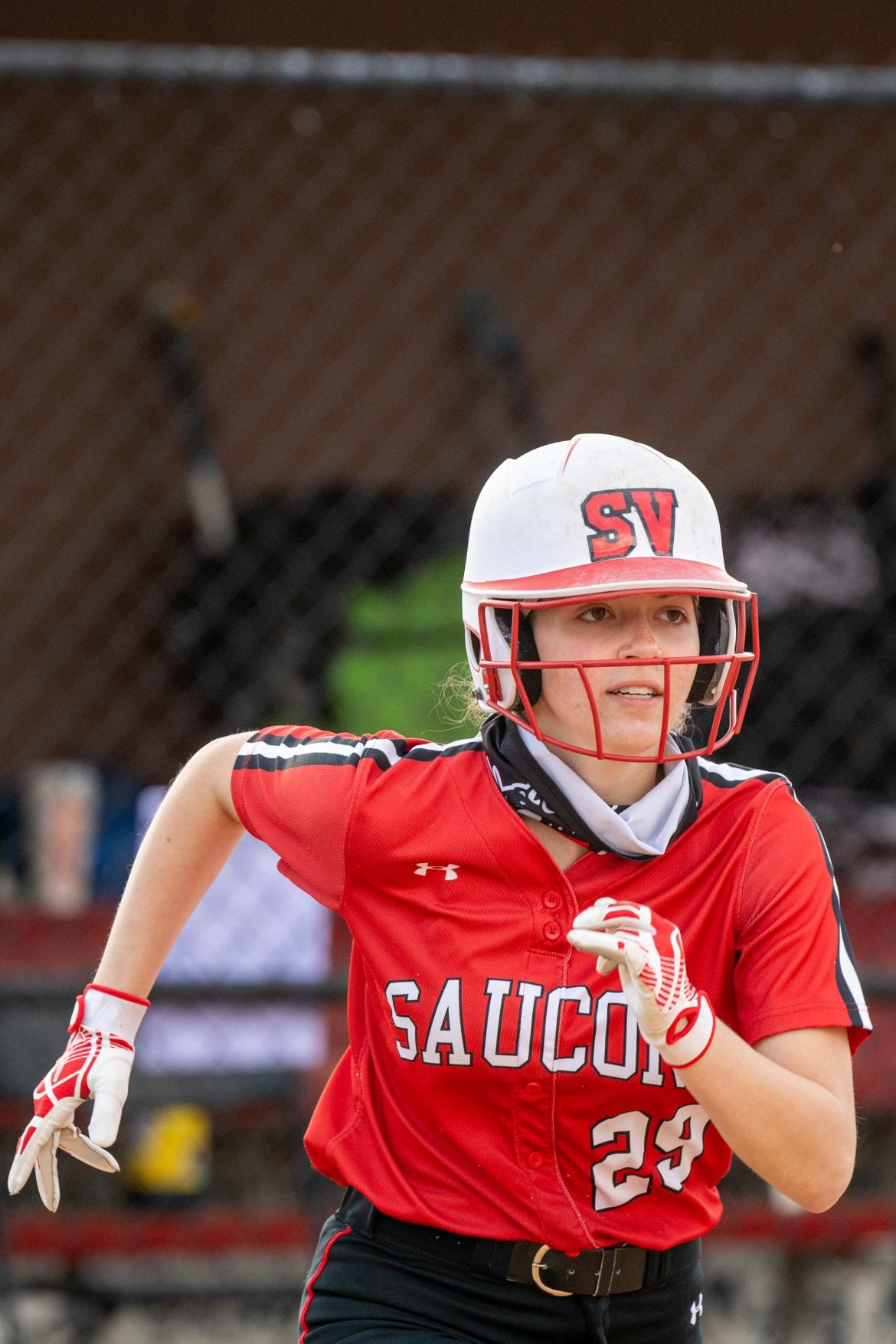 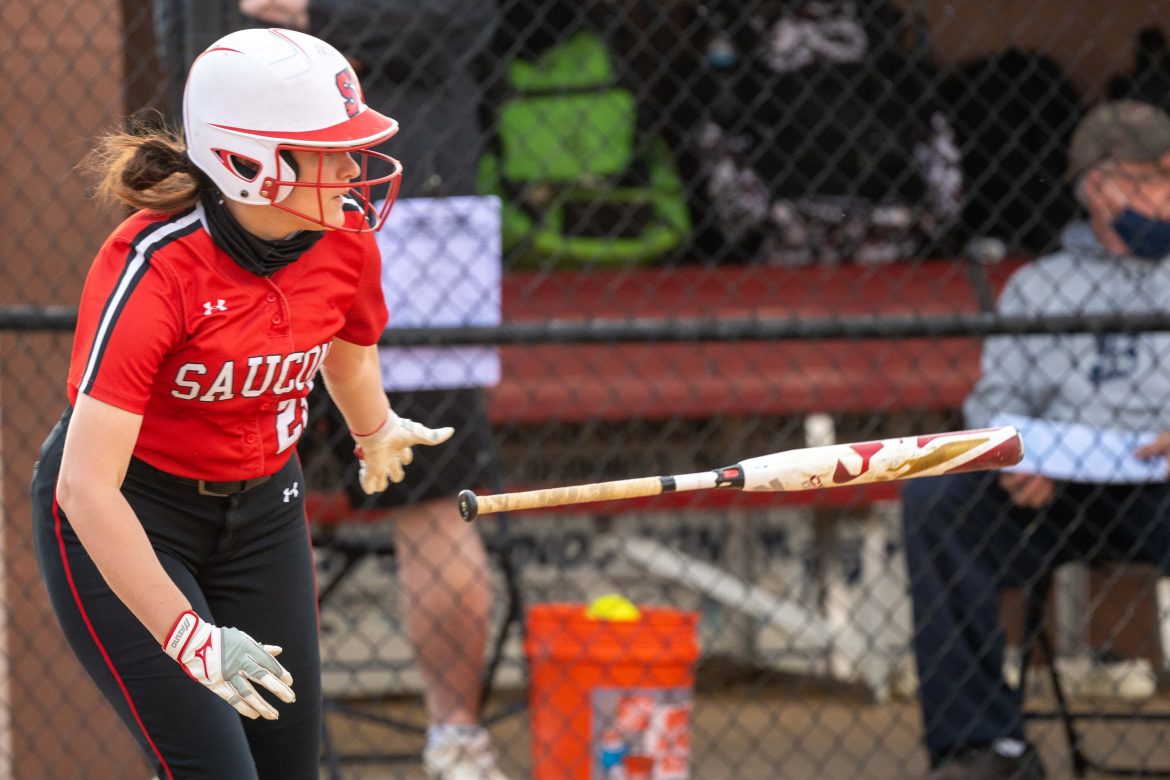 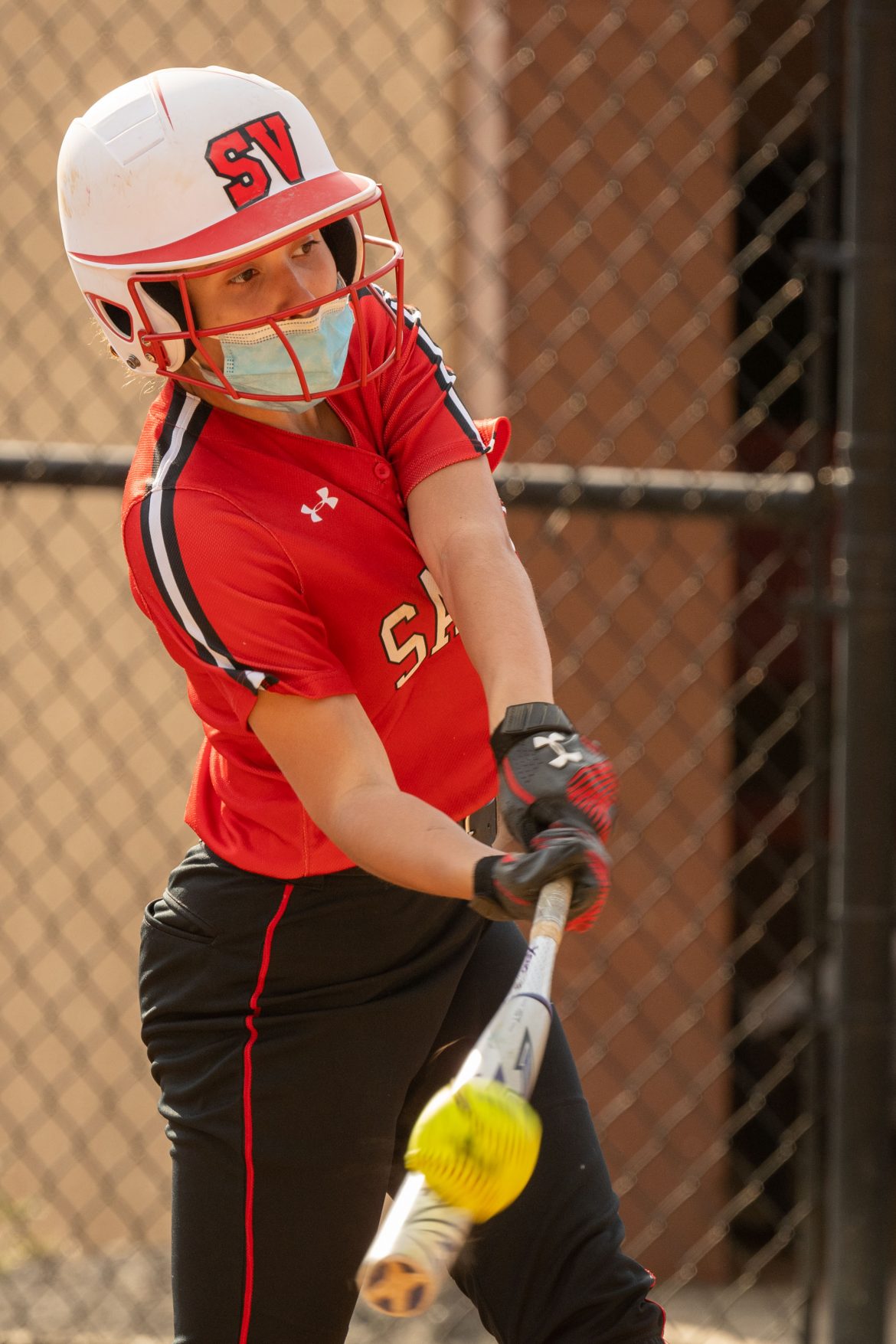 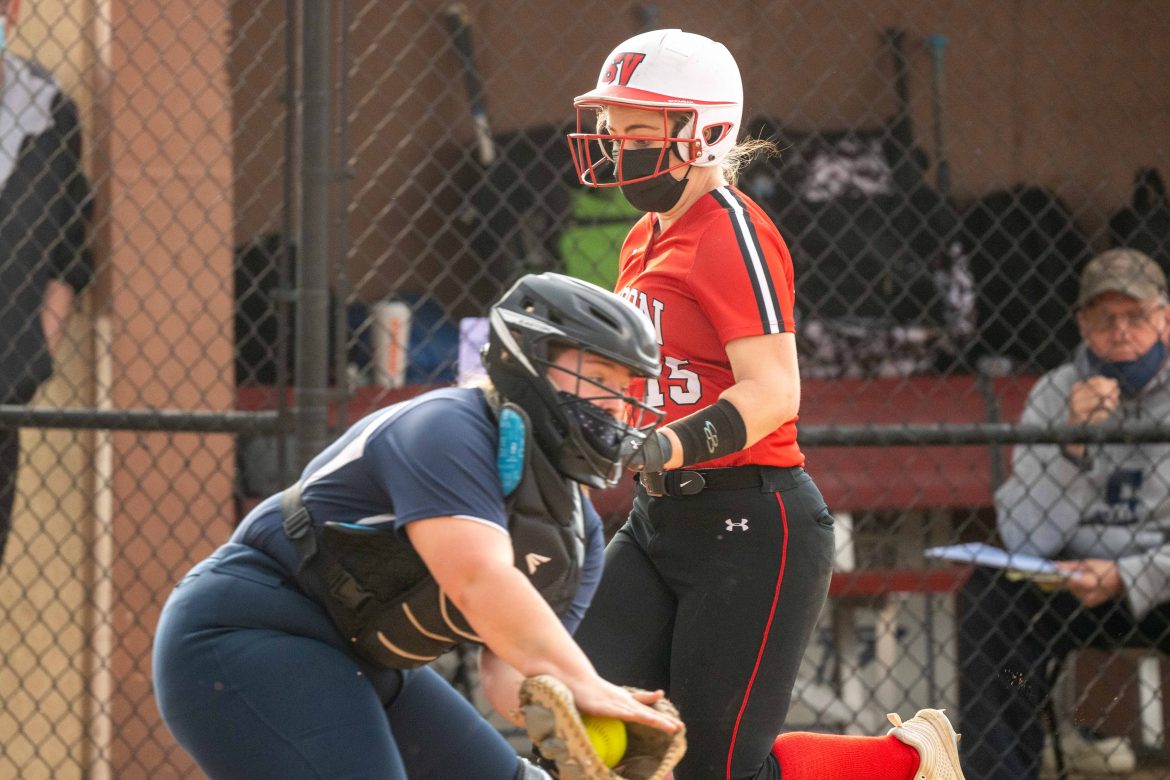 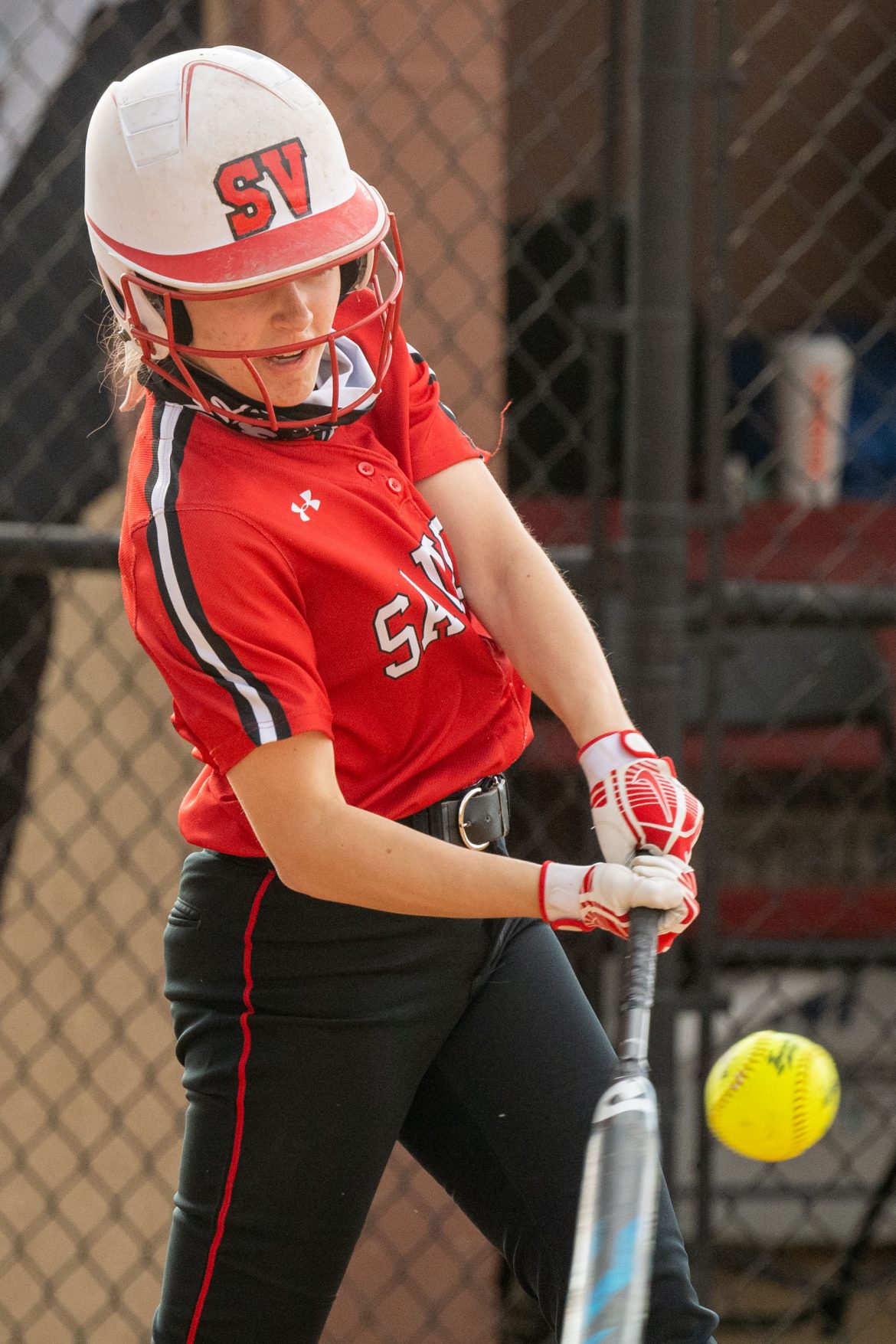 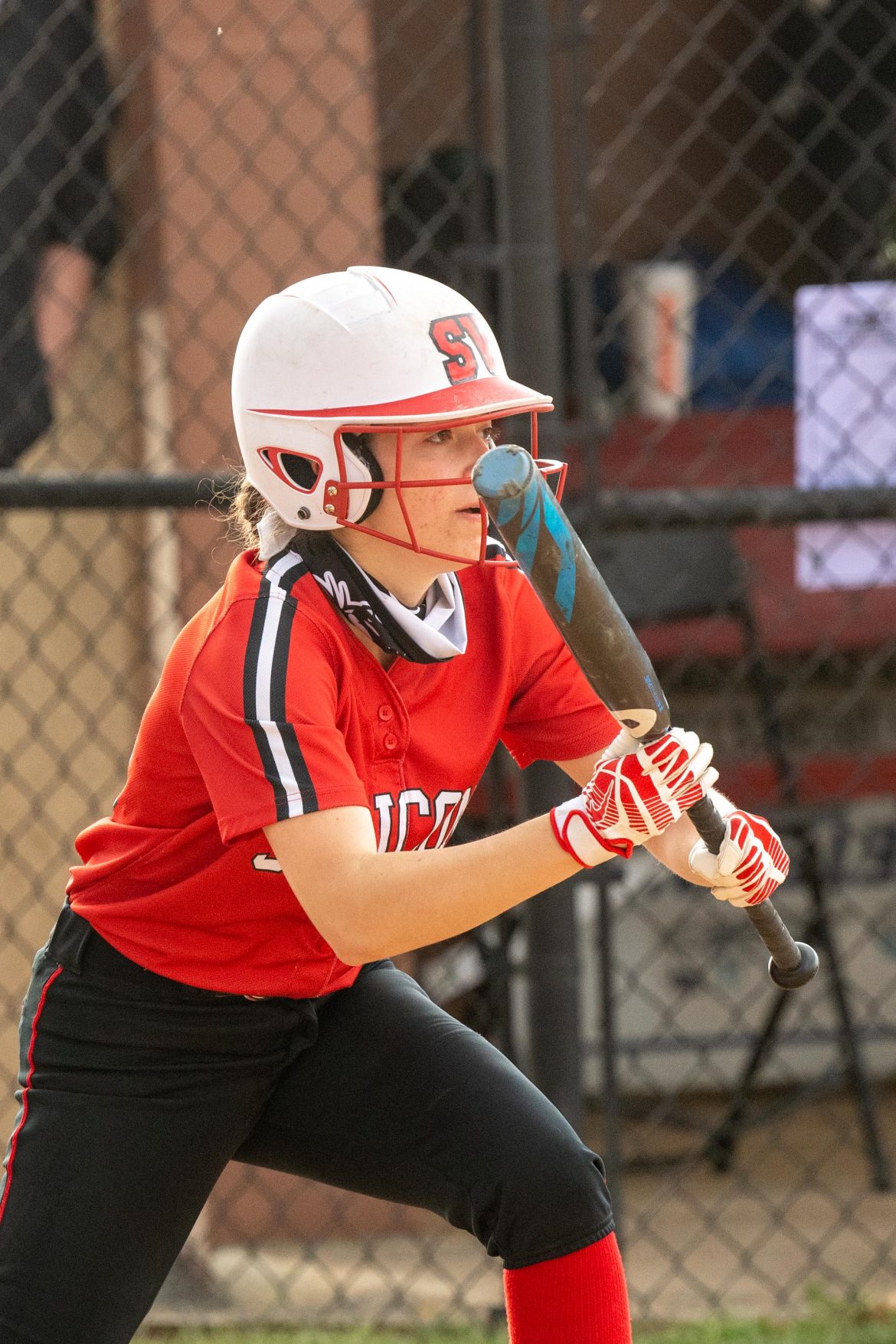 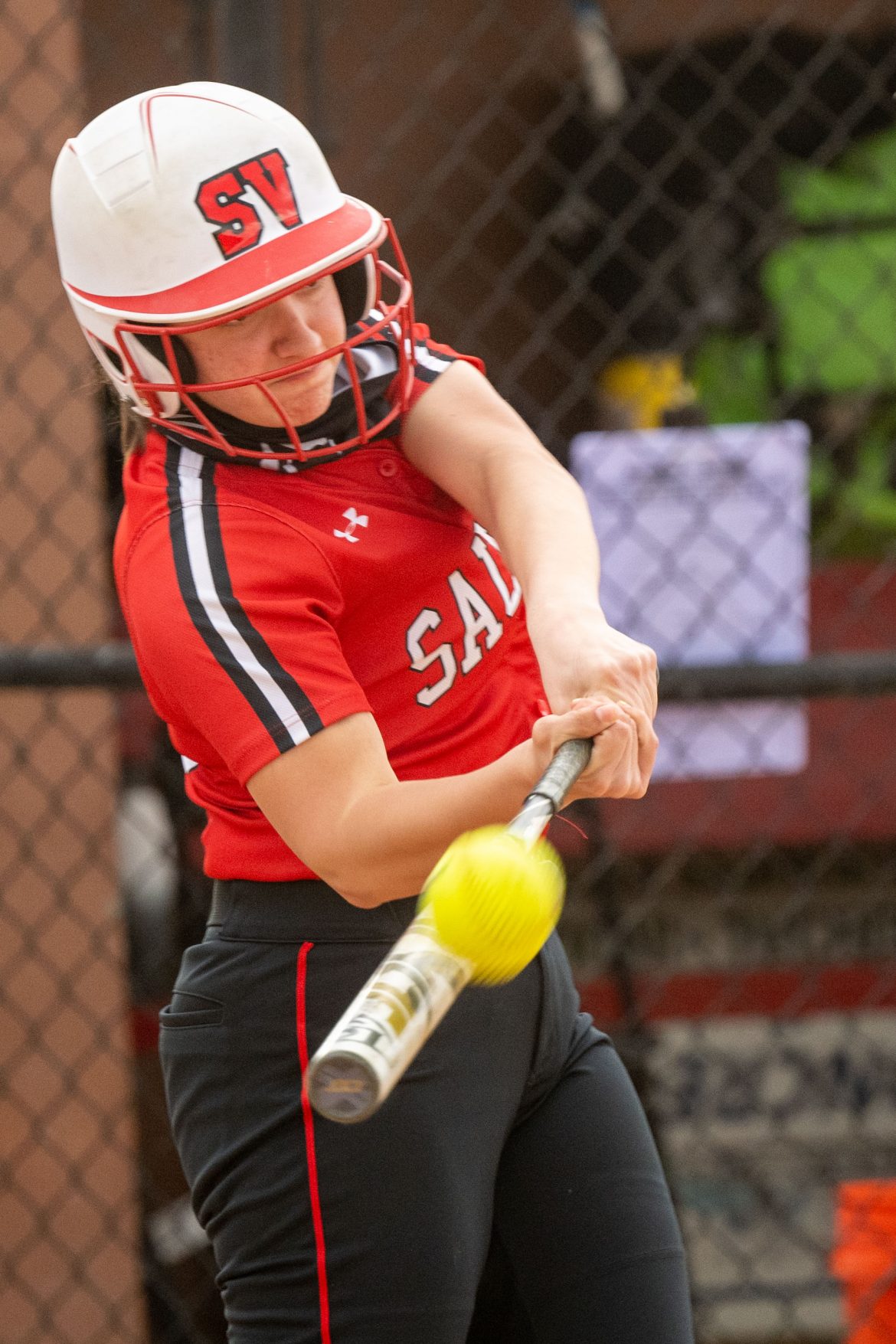 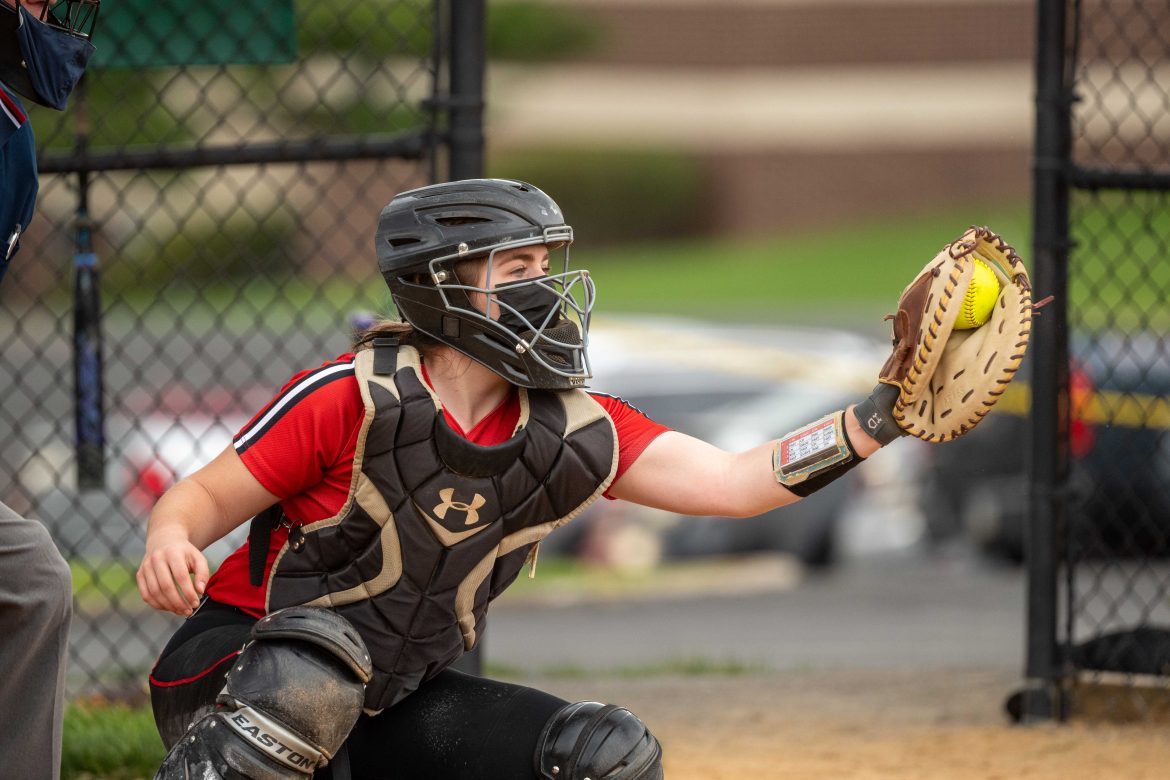 Junior Emma Rudolph singles to right centerfield in the sixth inning against the Salisbury Falcons.