Richland Township Police announced Friday that they have issued an arrest warrant for a man in connection with a hit-and-run accident involving a pedestrian that happened Thursday. 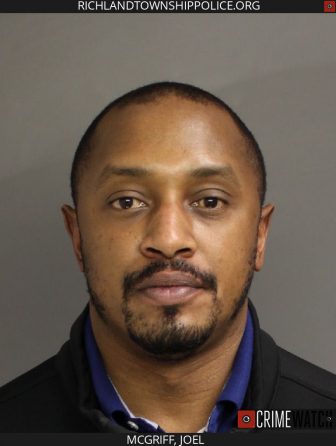 Richland Township Police announced Friday that they have issued a warrant for the arrest of Joel McGriff in connection with a hit-and-run accident involving a pedestrian that occurred on Mill Road. McGriff is 40 and a resident of Milford Township, police said. Anyone with information regarding his whereabouts is asked to contact Richland Township Police.

Police said Joel McGriff, 40, of Milford Township, is wanted in connection with the accident that happened in the 200 block of Mill Road, west of Rt. 309 near Quakertown.

The accident left a 70-year-old resident “down in his front yard,” according to the department’s Crimewatch post, and left police seeking information from the public.

Police identified the victim of the hit-and-run as John Gruver, who they previously said suffered serious injuries as a result. On Friday, police said Gruver had “undergone multipe surgeries” at St. Luke’s Hospital in Bethlehem.

Police credited the assistance of community members with helping them to identify McGriff, who they said is now wanted on charges of Accidents Involving Death or Personal Injury, Careless Driving, Failure to Render Aid or Give Information and Failure to Notify Police of Accident, Injury or Death.

According to the criminal court docket filed in the case, the charge of Accidents Involving Death or Personal Injury is a felony while the other three charges are summary offenses.

Anyone with information about McGriff’s whereabouts is asked to contact the Richland Township Police Department by calling 215-536-9500 or submitting a tip via their Crimewatch page.

Note: All individuals charged with a crime are presumed innocent until proven guilty in a court of law. This story was compiled using information from the Richland Township Police Department and court documents from Bucks County.