A Coopersburg man has been charged in connection with a recent automobile crash which Springfield Township Police say was DUI-related. 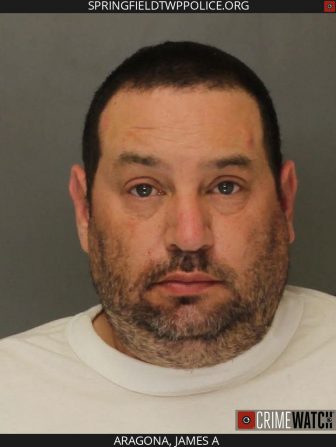 In a post on their Crimewatch page Thursday, police said 44-year-old James A. Aragona was borrowing a friend’s Cadillac Escalade when he allegedly drove while under the influence of alcohol and/or a controlled substance on the morning of June 11.

Police said Aragona was under the influence when he allegedly crashed the SUV on Tumblebrook Road, near Salem Road, around 11:15 a.m.

According to police, Aragona “is required to only operate a motor vehicle with an assigned Ignition Interlock device installed” and the Escalade did not have such a device installed.

Ignition interlock devices (IIDs) are handheld breathalyzers that prevent a vehicle from starting if alcohol is detected on the operator’s breath. Under Pennsylvania law, an individual convicted of a second or subsequent DUI offense is required to have an ignition interlock system installed on each motor vehicle they own, operate or lease for a period of one year. According to the law, an individual convicted of operating a vehicle not equipped with an IID when one is required by their license may be subject to an extension of their IID requirement as well as other penalties.

Police said that following the accident, Aragona was taken to the hospital for treatment.

In addition to DUI, Aragona is charged with Illegally Operating a Vehicle Without Ignition Interlock–which is also a misdemeanor–and the following summary offenses: reckless driving, careless driving, speeding and failure to keep right.

According to court records, a preliminary hearing in his case is scheduled to be held Monday, July 26 at 9:45 a.m. before District Judge Gary Gambardella in Bucks County District Court 07-3-03 in Ottsville.

Note: All individuals charged with a crime are presumed innocent until proven guilty in a court of law. This story was compiled using information from the Springfield Township Police Department and Bucks County court records.