Jason is certified in an innovative type of therapy, called geek therapy, which references video games, comic books, hero shows and anime, to encourage interaction and build trust. One of his ideas was accepted for a recently-produced Geek Therapy Card Deck used by behavioral health professionals, teachers and parents to enhance communication with children and teens. 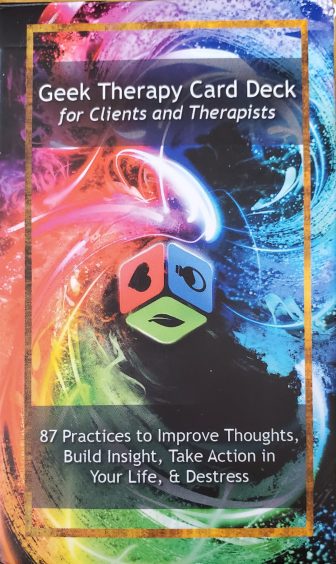 Frei is St. Luke’s Clinical Coordinator for its School-Based Behavioral Health (YESS!), and spent about a year becoming certified in geek therapy. But he has used topics considered by many people to be “geeky” for about 25 years.

Describing himself as a “100 percent geek,” Jason has been interested in fantasy and science fiction for as long as he can remember. His particular interest, or fandom, is comic books. Although they have become more mainstream recently due to the popularity of Marvel’s and DC Comics’ movies and TV shows, for many years comic books were a refuge for kids who were picked on by their peers. They identified with the heroes, many of whom had hard lives, were bullied or who were outsiders.

Jason talks about characters and story lines to engage his patients and help them gain awareness about their own emotions and practice self-control. For example, his suggestion that was accepted for the card deck designed by Geek Therapeutics–the organization that provides certification for Geek Therapy–says:

Lots of superheroes wear armor to protect themselves from different attacks. If you were a superhero, what would your armor protect yourself from? And explain how it would repel those attacks?

Using the cards, Jason allows patients to consider the concept and think about how they might react in a stressful situation.

He shared an example of how it can work.

During a recent therapy session, a patient, who often feels bullied, told Jason he had been playing a tabletop game with his family when he became angry because his sister picked on him and called him a loser. Normally the teen would have flipped the board. This time, however, he went to his room and envisioned putting on this armor and seeing his sister’s words bouncing off the breastplate. It calmed him down, enabling him to return to the game.

“He said to his sister, ‘Your words don’t have any effect on me. Let’s finish the game and I’ll show you who the loser is.’ He won the game, but more importantly, he controlled his anger,” Jason says.

The cards, which are available on Amazon.com for about $20 a deck, contain teachings, ideas for contemplation and exercises. It’s suggested they be used as conversation starters, topics for discussion and as ways to drive points home and shift thinking patterns. The cards are separated into the following topics:

Geek therapy allows kids to relate to their therapist in a non-threatening way and teaches them skills they’ve already seen played out in the video games, movies and TV shows they watch. One of Jason’s favorite characters is the Incredible Hulk, he says, because anger is an emotion that we all understand. When Dr. Bruce Banner becomes angry, he turns into his alter ego. As the Hulk, he destroys everything around him, including his relationships and his friends. When he turns back into Dr. Banner, he must deal with the consequences of his anger, just like Jason’s patients do. In the Avengers movies, the Hulk comes out as one of the stronger characters by bringing his intelligence and brute strength together, and is helped by another character, Black Widow, who shows him kindness.

The cards are not only for professionals but are also useful for parents, Frei says. When dealing with children and teens, he advises parents to find out what their kids like and then allow them to be the teacher when it comes to that subject.

“If your kids play video games, have them teach you how to play, and play with them,” he says. “When you’re playing, they’re going to open up so much more to you. It’s going to expand the communication that you have. Most of the kids I talk to say their parents don’t understand them. Take the time to connect with your kids on their level. It’s going to make your relationship so much better.”

St. Luke’s University Health Network is offering the YESS! School-Based Therapy program in many area school districts. YESS! stands for “Your Emotional Strength Supported!” Parents should talk to their child’s guidance counselor for more information about it. School officials who want to learn more about the YESS! School-Based Therapy Program should contact St. Luke’s Practice Administrator at 484-822-5712.