A Lower Saucon Township man was jailed after police say he stalked and harassed a woman, allegedly contacting her via social media and showing up uninvited–repeatedly–at her home.

According to a version of events shared by township police on their Crimewatch site Monday, 22-year-old Zachary Tyler Petrucelli initially “randomly contacted” the woman “multiple times” online, and after being told to stop was blocked from contacting her again.

According to police, Petrucelli next showed up at the victim’s home, where they said he “cornered (her) in a room and held her down by her wrists.” 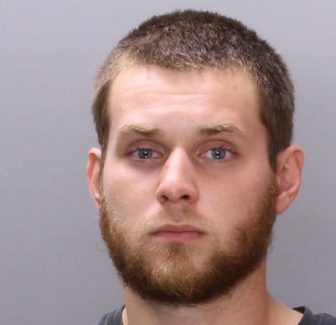 Zachary Tyler Petrucelli of Lower Saucon Township has been charged with stalking and other offenses, according to township police and county court records.

Police said that when the woman was able to break away from Petrucelli, “she went into another room and the defendant would not let her out until she yelled for help.”

After being told not to return to the residence, police said Petrucelli showed up a second time the following evening.

When the woman prepared to leave her home later that night, “she found that there were large rocks placed across the driveway prohibiting her from leaving,” police said.

All of the charges filed against Petrucelli are misdemeanors except for the disorderly conduct charge, according to the criminal court docket filed in his case.

Following a preliminary arraignment before District Judge Robert Hawke over the weekend, Petrucelli was committed to Northampton County Prison in lieu of $10,000 straight bail, the docket stated.

Petrucelli is next scheduled to appear in District Court 03-2-04 at a preliminary hearing before District Judge Alan Mege on Friday, Aug. 27 at 9 a.m., according to the records.

The docket did not list an attorney for Petrucelli.

Note: All individuals charged with a crime are presumed innocent until proven guilty in a court of law. This story was compiled using information from Lower Saucon Township Police and Northampton County court records.