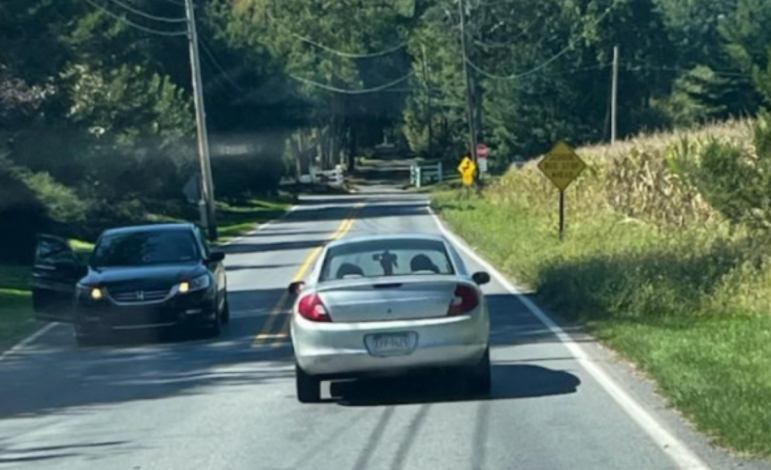 Lower Saucon Township Police are asking the public to help them identify the driver of the vehicle pictured above, who they say was involved in the theft of two gas containers from a landscaping trailer Friday. The trailer was parked along Skibo Road when the driver of the pictured vehicle stopped and stole the containers, police said Monday. Police said the male suspect is white and appeared to be in his late teens or early 20s. Tips may be submitted online via Crimewatch or by calling the Lower Saucon Township Police Department at 610-759-2200 or 610-317-6110.

Lower Saucon Township Police are asking for the public to help them put the brakes on a mobile gas canister thief.

In a news release posted to their Crimewatch site Monday, police shared a photo of a vehicle they said was being driven by the alleged thief when the crime was committed.

They said the theft happened Friday, Sept. 24 at around 1:15 p.m., when the driver of the silver-colored car stopped alongside a landscaping trailer that was parked on Skibo Road.

“A white male (in his) late teens or early twenties exited the vehicle, took two gasoline containers and placed them in the rear seat of (the vehicle),” police said.

The man then drove away in the direction of Meadows Road, the news release indicated.

Anyone with information about the owner of the vehicle or regarding this incident is asked to contact the Lower Saucon Township Police Department by calling 610-759-2200 or 610-317-6110, or by using their tip submission button on Crimewatch. Tips may be submitted anonymously via the Crimewatch page.

It is unclear if gas prices may be contributing to a rise in gasoline-related thefts, but according to GasBuddy.com the average price of a gallon of unleaded gas in the Allentown area is currently approximately $3.30, which is the highest it has been since the spring of 2014.